BACK TO ALL NEWS
Currently reading: Analysis: Joe Biden vows to electrify the US
UP NEXT
New Morgan Plus Four CX-T is rally-ready sports car

Analysis: Joe Biden vows to electrify the US

Donald Trump may not like it, but Joe Biden is set to be inaugurated as the 45th president of the United States of America on 20 January.

The change in occupant at the White House will lead to a major shift in the country’s environmental policies – and is already having an impact in accelerating the car industry’s shift to electrification. General Motors (GM) recently made a series of announcements outlining aggressive plans to become a market leader in electric vehicles, with a target for 40% of its US sales to be electrified by 2025. It recently revived the Hummer brand with an electric off-roader, while Chevrolet offers the long-running Bolt hatchback.

All this has coincided with another shift that highlights how the US car industry is likely to shift once Democrat Biden is in power, with GM also recently saying it will switch sides in an ongoing legal battle over fuel economy standards, signalling that it will now support policies to promote zero-emissions vehicles.

While governments in the UK, Europe and China have been aggressively pushing towards EVs to reduce carbon emissions, recent US policy – influenced in part by the country’s influential oil industry – has moved in the other direction.

During his presidency, Trump and his Republican party have been active in rolling back regulations on the fuel efficiency of vehicles and in promoting the continued use of petrol engines. In March this year, Trump scrapped rules introduced by his Democrat predecessor, Barack Obama, that required car makers to reach a fleet average fuel economy of 54 US MPG (64.85 metric MPG) by 2025, replacing that with a standard of 40 US MPG (48 metric MPG).

The Trump administration’s policy prompted the state of California, a Democratic Party stronghold, to introduce its own fuel economy standards, which it was allowed to do under a waiver previously agreed with the US government. California – which has separately announced a plan to ban the sales of combustion engined-vehicles by 2035 – agreed with BMW, Ford, Honda and Volkswagen to reach a fleet average of 51 US MPG (61.25 metric MPG) by 2026.

One of those lawsuits was backed by Fiat Chrysler Automobiles, GM, Nissan and Toyota. Those manufacturers argued that it was about achieving a single standard, rather than specifically supporting the laxer fuel economy targets.

However, GM has now shifted its position, with company boss Mary Barra confirming in a letter to environmental groups that it would withdraw from the Trump administration litigation. She wrote: “We are confident that the Biden Administration, California and the US auto industry, which supports 10.3 million jobs, can collaboratively find the pathway that will deliver an all-electric future. To better foster the necessary dialogue, we are immediately withdrawing from the pre-emption litigation and inviting other auto makers to join us.”

Ford wasn’t part of the original litigation and has welcomed Barra’s move. The other involved firms have yet to follow suit, although Toyota said in a statement that it was “assessing the situation,” while emphasising its support for a single national standard.

Biden has signalled that he will make tackling climate change a key mission of his presidency. He has already said that he will recommit the US to the Paris Agreement on climate change (from which it was officially withdrawn by Trump only last month) and wants to set a national target of net-zero carbon emissions by 2050. 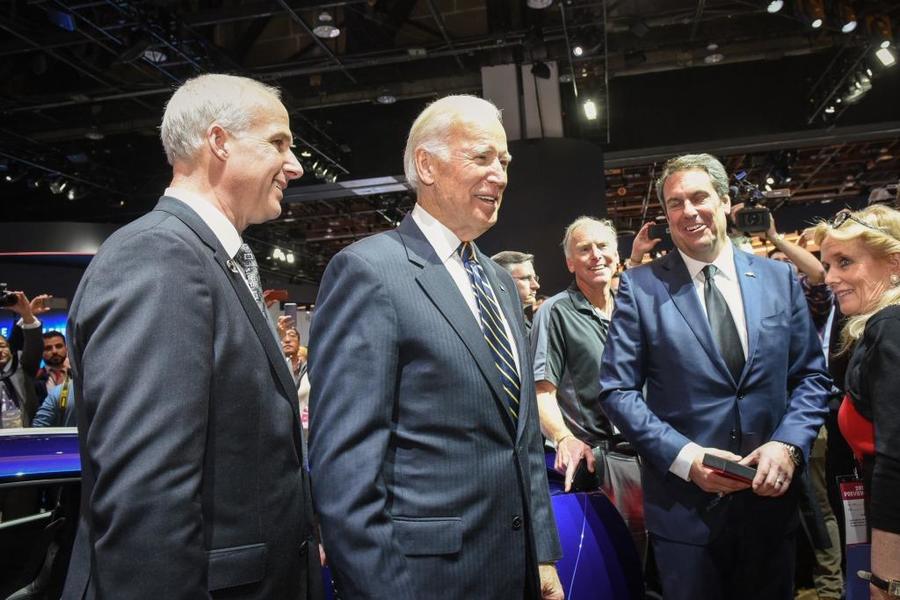 Biden’s transition website includes a commitment to create a million new jobs in the US car industry and related supply chain and infrastructure firms, “from parts to materials to electric vehicle charging stations, positioning American auto workers and manufacturers to win the 21st century”.

Specific plans set out include increasing demand for American EVs, support for car buyers to switch to EVs, a commitment to build 500,000 charging stations and accelerating battery research and development. That will be welcomed by both long-established US firms such as Ford and GM, which are already committing heavily to electric technology, and EV start-ups like Lucid and Rivian.

Around 17 million new cars were sold in the US last year, but the vast majority were ICE-only. Just 326,644 plug-in hybrids and EVs were sold, a figure that was down on the 2018 total (see left). That number was hugely boosted by the Tesla Model 3, which took 154,840 sales.

While Biden’s policies will likely be focused on helping to create jobs, encouraging the growth of EVs in the US will be welcomed by global car firms that are active in that market. These include the likes of BMW, Volkswagen and Volvo, which are invested heavily in EVs and are gearing up to launch them in the US in the coming years.

Energy industry analysts at Bloomberg NEF estimate that the commitment to develop 500,000 charging stations – up from only around 90,000 at present – would cover around 57% of the US public’s charging needs by 2030 and could spark the sale of 25 million EVs by then – an average of 2.5 million per year.

That might seem ambitious in such a vast nation, especially as its market is dominated by pick-up trucks and large SUVs, but the bulk of those EV sales would likely be concentrated in urban areas, where the public charging network would be most developed.

Whatever follows, it seems certain that Biden’s tenure is poised to set the US on a path towards electrification that won’t be reversed.

Joe Biden will be the 46th president. Glaring mistake there Autocar.

This premise of this entire article is false.  Biden plans this, Biden plans that...it doesn't matter because he didn't win the election.  If the establishment politicians in both parties allow him to be president, despite losing by a landslide, he won't be able to govern at all or get anything done because he is an illegitimate president.

This premise of this entire article is false.  Biden plans this, Biden plans that...it doesn't matter because he didn't win the election.  If the establishment politicians in both parties allow him to be president, despite losing by a landslide, he won't be able to govern at all or get anything done because he is an illegitimate president.

Just what we needed to hear, Trump went out of his way to be controversial, in all the things I've seen, read, none have praised him, Biden can't do any worse, this statement is beneficial.

Honourable but will always be behind musk on this subject.