BACK TO ALL NEWS
Currently reading: No Renault Twingo RS planned
UP NEXT
Volkswagen committed to 'entry-level' ID electric models

Renault's head of small car development, Benoît Bochard, has confirmed to Autocar that there will be no Twingo RS in the model's line-up – but also admitted that higher performance versions are under consideration.

Speaking at the Geneva motor show, following the reveal of the new Twingo, Bochard said: "The last Twingo RS was great to drive, but not a success in sales terms. It was too expensive – customers did not want to pay £15k for such a small car. An RS version wouldn't sell.

"But we have more powerful turbos in the engine range, so there are possibilities for the future if we decide to go that way."

"Platforms are built for two generations, to do 15-18 years," said Bochard. "So while the Twingo platform can run an electric powertrain, there are no firm plans yet." 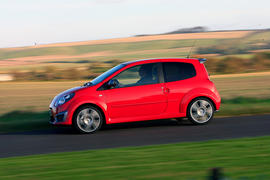 Seems like an admission there is no profit margin in the car itself.
Crixter 4 March 2014

This is a shame....I'm sure a lot of people will be asking for a powerful version of this car....but...if they can't do it for less than £15k....then it is indeed too expensive.

Really looking forward as to how this drives!