Volkswagen has unveiled a four-wheel drive version of its Transporter. Badged as Volkswagen Multivan Alltrack at its Geneva motor show launch, it boasts a 4Motion drivetrain and off-road technology.

Inside it features grey-blue leather seat trim and a genuine wood boat floor and door trims. Functions are accessed by an 8in touchscreen and audio functions play through a Dynaudio surround sound system.

It is fitted with a floor-mounted track system which Volkswagen claims offers “tremendous versatility”. It serves as a base for the Alltrack’s movable seats or a mobile kitchen module which provides a cool box, gas cooker and a sink with a fresh water tank. It can be removed to be used outside of the vehicle.

The concept is powered by a 2.0-litre TDI engine developing 178bhp transferred to all four wheels via a Haldex multi-plate coupling. It has an approach angle of 21 degrees and a departure angle of 15 degrees.

Volkswagen says the Multivan Alltrack, the spiritual successor to the Transporter Syncro from the 1980s, underlines the “enormous potential” of the current model, suggesting a production model could be a possibility. 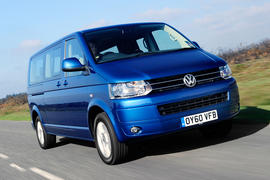 The Volkswagen Caravelle is a rugged workhorse to carry people and luggage. That's why it is so popular as an airport taxi

VW have always sold the T5 Transporter with the option of 4-motion both here and in Europe. In Europe they also sold the 'Panamericana', which is pretty similar to this 'Alltrack' (leather, body kit, alloys, etc.). I like it but I think the price would put many off in the UK.