From £16,7498
After 20 years, Suzuki has finally launched a new version of its mini off-roader – and it combines charm and capability
Open gallery
Close

This new Jimny is so noteworthy because of just how rare the arrival of a new version of Suzuki’s small off-roader is. This is the fourth generation of Jimny. The first arrived in 1970, and lasted 11 years. Its replacement was on the market for 17 years, until the third – and most recent – generation arrived in 1998. That was the same year the Ford Focus launched, a car that has just reached its fourth generation.

Given how long the previous Jimny was on sale, it won’t be giving much of the verdict away to tell you that the new Jimny is fairly clearly better than its predecessor – which shouldn’t be surprising given how far car design and technology has come in 20 years.

As an example, the new Jimny has Apple CarPlay. The old one didn’t, what with it being released nine years before the iPhone was invented.

But while much about the new Jimny has changed, much will be familiar to the previous-generation model’s fervent fan base.

Suzuki’s mission statement to make ‘the one-and-only, small, lightweight four-wheel-drive vehicle’ remains. Under that new body, the fourth-generation Jimny still features a ladder frame chassis, three-link rigid axle coil spring suspension and four-wheel drive. The addition of new tech such as hill hold and descent control, brake support and a host of driver assistance systems are all intended to make the new Jimny even more capable than the old car. 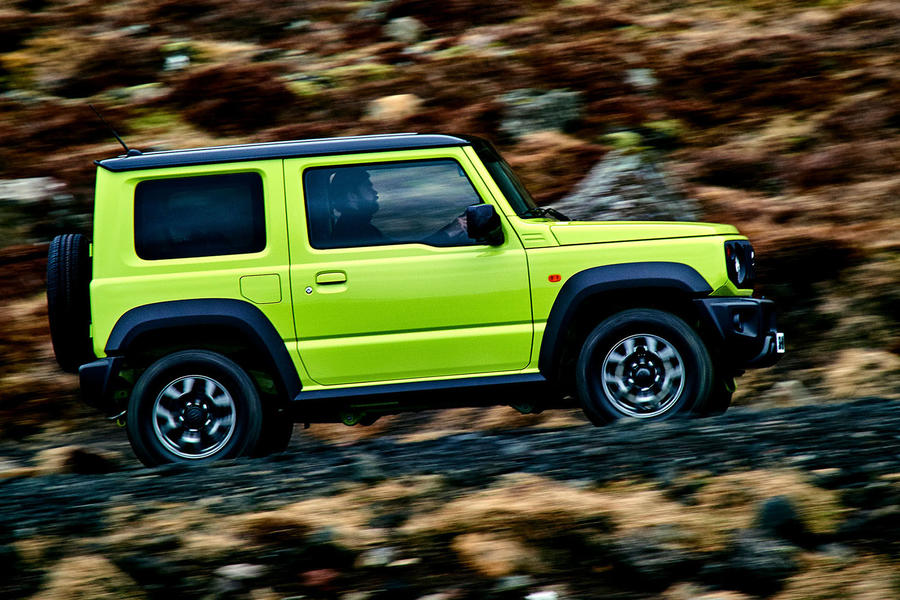 Design-wise, the old Jimny was beginning to show its age, so there’s some irony in the fact Suzuki has modernised it by giving it something of a retro design. The new model is sharper and boxier, while retaining familiar Jimny traits such as the round headlights, independent indicators and front grille design.

It gives the new car something of a mini Mercedes-Benz G-Class vibe, served with a side of micro-sized Japanese fun. This is subjective but, to this tester, it looks fantastic.

Fantastic and tiny. The new Jimny retains the small size of its predecessors: in fact, while it’s 45mm wider and 20mm higher, this new model is actually 30mm shorter than the old one. Those dimensions ensure a variant of the Jimny (fitted with a 650cc engine) qualified for Japan’s kei car class.

That small size means this remains a small car inside. The driver’s footwell feels a little cramped, with the accelerator pedal right up against the transmission tunnel.

There are only two seats in the back, without much leg room on offer, and the luggage capacity is a mere 377 litres – and that’s with the rear seats folded down. With the seats up, there’s just 85 litres of storage, accessed through a sideways-opening boot. Still, that 377-litre total is a 53-litre improvement on the old car.

The old Jimny’s 1.3-litre petrol engine has been replaced by a new 1.5-litre unit – the only option, with Suzuki moving away from diesels – which offers 100bhp, 95lb ft of torque at 4000rpm and a top speed of 90mph. Our test car featured the five-speed manual 'box, and a four-speed auto is also available.

As those specs might suggest, the Jimny is not an especially fast car. The revvy engine takes some working to get up to speed, especially with the long gearstick’s substantial and slightly agricultural throw.

Running on 15in wheels and chunky 195/80R15 tyres and with the electrically assisted recirculating ball steering, the Jimny doesn’t offer much in the way of direct feel or driver feedback, although the short wheelbase makes it extremely direct and nimble to drive. And, as you’d expect given the car’s serious suspension, it soaks up even the biggest of bumps with ease.

The car’s high-riding, box-like dimensions and large windows ensure that visibility is excellent, although that also means wind noise is notable at higher speeds.

During our test drive, we were able to sample the Jimny on an off-road forest course, including deep ruts, steep hills and a muddy watersplash – and the Jimny simply never put a foot wrong.

The ability to switch from two-wheel drive to four-wheel drive, and then a four-wheel-drive low mode, gives it real ability, while the rigid axle suspension soaks up everything you can throw at it. For those who need to know such things, the approach angle is 37deg, the ramp breakover angle is 28deg, and it has a departure angle of 49deg.

A serious off-roader, then. And that’s reflected in the interior, which is described by Suzuki as "functional". The mostly black dashboard and switches are predominantly plastic, with many switches shared with other Suzuki models, and the seats are comfortable rather than cosseting. Still, what it lacks in premium, it makes up for in practicality – which is exactly as it should be for a proper off-roader.

There are some nods to luxury – or at least modernity – inside, with features on our top-spec SZ5 model including climate control, Suzuki’s 7.0in touchscreen, rear privacy glass and heated front seats. 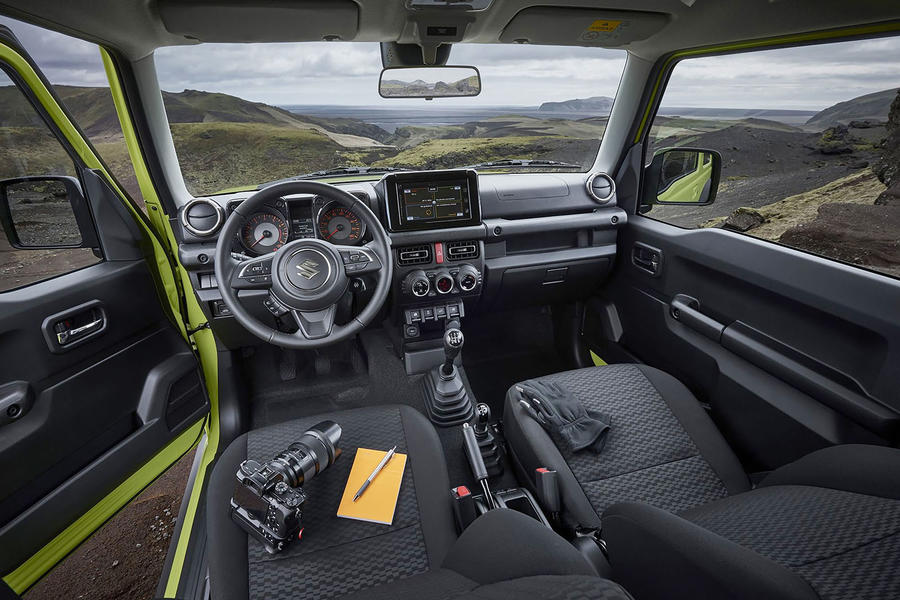 This fourth-generation Jimny might have brought it into the 21st century, but it’s still not exactly at the cutting edge. But, then again, it’s not trying to be. And all of those faults listed above, flipped on their head, are what makes the new Jimny superbly fit for purpose, as a truly capable mini off-roader.

This is a niche car that exists almost in a class by itself, and for the 1300 or so people who buy a Jimny each year and need a pocket-sized off-roader, this new model is capable, confident and utterly compelling. Which is probably why Suzuki has already been swamped with interest from eager buyers.

While UK prices have yet to be set, it will cost more than the old model, likely somewhere in the region of £16,000. For that money, you get a hugely capable off-roader in minature. And oodles of charm thrown in for free. 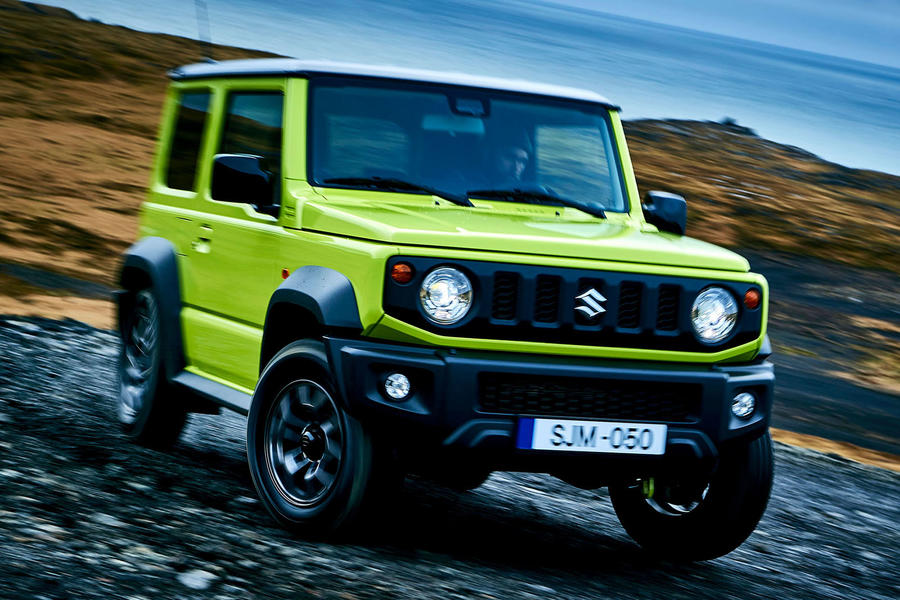 If they make it basic enough for the farmer to replace the Defender at a price they can afford  (not over priced like the Defender) then Suzuki will have a hit on their hands and wont be able to make enough to meet demands but it needs to be able to pull a very heavy load.

Someone on here tried to state that Land Rover hadn't abandoned the Defender or the market, what a fool. They then tried to support their argument with other stuff like 6 wheeled versions etc.

To that person, if Land Rover hasn't abandoned the Defender or the market then why isnt there a model in it's place?

Dont come back with they are making sure its ready and tested etc etc, Land Rover knew exactly when they would stop production.

No manufacturer in their right minds removes a model without a replacement expecting to add one over 3 years later after production stopped and expect to retain the market.

Too late now, there are too many people purchasing whats available and telling people how good they are compared to the rusty rubbish Land Rover sold and all the issues that went with it.

Ask any Defender owner with a vehicle thats still in warranty how many times they have complained about bubbling paint and rust and before anyone asks, thats on ones that have never been of road let alone the ones that live in muddy fields!

I own a Defender and love it but people who bought late level vehicles particularly 2.2s are close to hating them because of major issues as outlined above.

No good adding high end models, taking the money and not doing anything to prevent long term issues such as corrosion. If you arent going to support the warranty on body and paint dont give it a 6 year warranty. I know owners of late 2.2s that have been without their vehicles because they have been in for warranty repairs for anything up to 8 months and some that have got their vehicles back with nothing done or more damage on the vehicle than when it went it!

If Suzuki have got this right, Land Rover will not sell any in the low end of the market again.

Just watched the official Euro NCAP video of Jimny, in above tests...THREE stars, under uprated criteria. Food for (2nd) thought anyone?.