BACK TO ALL NEWS
Currently reading: Our favourite video of 2019: Ariel Nomad vs Triumph Scrambler
UP NEXT
New 2022 Polestar 3 officially previewed as launch nears

Our favourite video of 2019: Ariel Nomad vs Triumph Scrambler

Two and four-wheeled British marques battled off in our favourite video of the year. Our man in the Nomad reflects on the experience
Open gallery
Close
Share story

This year, Triumph launched a new version of its Scrambler motorcycle. It’s a 1200cc twin and is almost as ruggedly handsome as the bloke riding it here, a former off-road champion called Matt Reed who runs the Triumph Adventure Riding Experience in Wales.

Triumph was going to take the bike to Matt to shoot some promotional video in a deserted forest and, well, the short of it is that I love the Ariel Nomad and it had been a while since I last drove one. So I pitched up too.

So there we were, in Wales, with Reed on the motorcycle and me in the Nomad, and between us we came up with a long, rough circuit coursing through the trees, with a pretty simple brief to shoot some brilliant pictures and video and end up with a ‘lap’ time at the end of it, to decide which was quicker. A lap of a place I’d never been to before but where Reed operates on most days of his working life. (Sorry, just wanted to get my excuses in early.)

You can buy the Scrambler in two forms, XC or XE, with this range-topping XE model getting better dampers and costing from £12,500. It’s a bit retro, to the extent that technically Triumph calls it a Bonneville derivative and lists it in its ‘modern classics’ range. In classic style it gets twin rear shocks, one each side of the wheel, whereas proper modern dirt bikes would have a single big shock mounted to a swing-arm ahead of the rear wheel, allowing greater and quicker suspension movement. 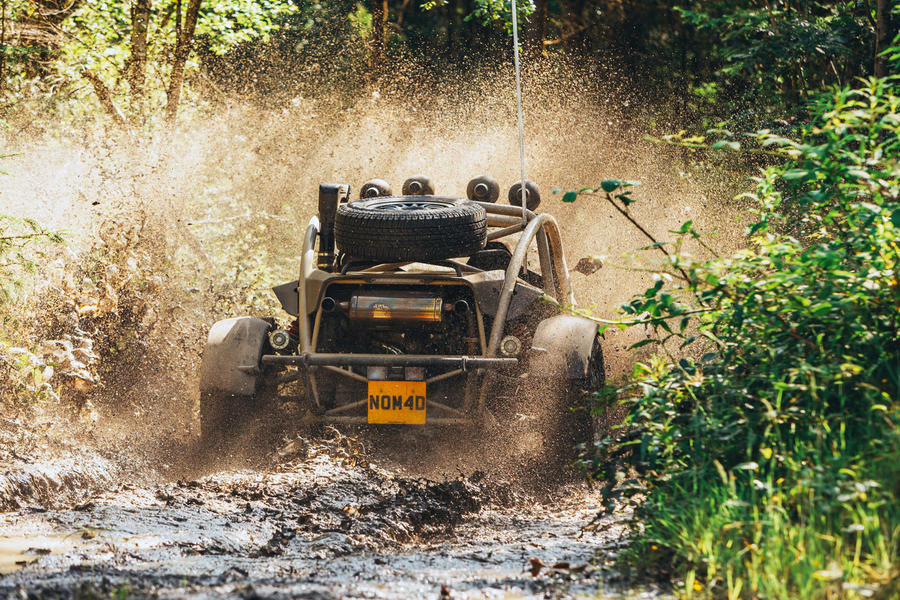 But the bike magazines rate the Scrambler as much more serious than it looks. Triumph throws in a free GoPro video camera when you buy one, too, to encourage owners to take it on some adventures and bring back the footage.

I know my way around four wheels a bit better than two, which is why I’d arrived in a Nomad, Ariel’s first foray into off-roading and still my favourite SUV. I know it’s only two-wheel drive but it’s as capable as any 4x4 I could want. Light and with a 245bhp, 2.4-litre Honda engine driving the back wheels through an H-pattern gearbox, I know it’s a riot. Ariel offers three sets of dampers, from ‘quite good’ through to ‘WRC-spec’, and on increasingly aggressive off-road tyres, with this example’s in the middle. 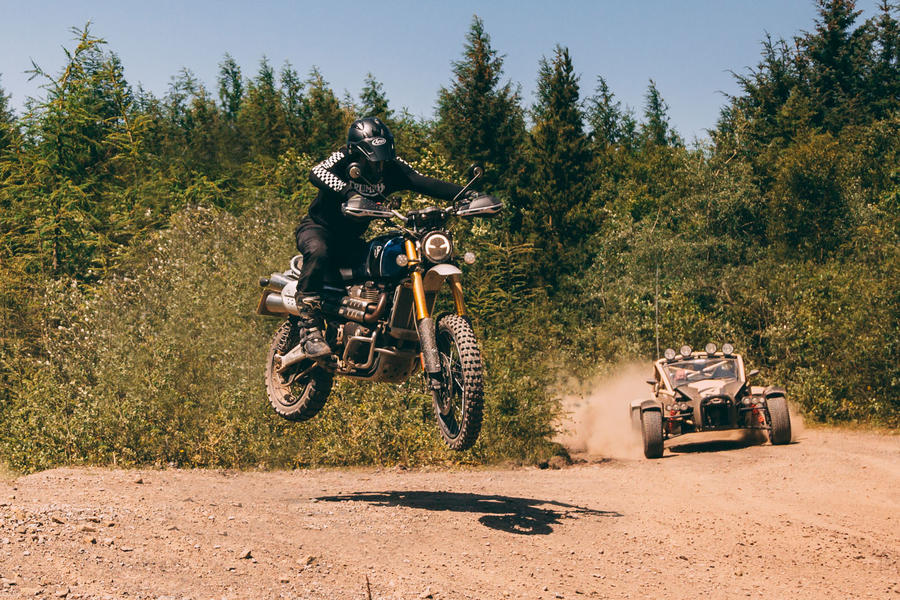 There’ll be a new Nomad at some point, using some of the learnings from the latest Atom 4, but this one, launched in 2015, still has so much going for it. It weighs a little under 700kg and although you can get a supercharged version, 245bhp is plenty for me in dust like this. The Nomad is responsive and has a remarkable ability to smooth out or skip over lumps that most off-roaders would pound into. What I perhaps like most is that it retains a sports car-like balance on account of being so light, and rear-drive only.

I got it around our course in 3min 42sec. It was a long course and I hadn’t seen it much before, okay? Reed went next on the Triumph and lapped 13 seconds faster than me, in 3m 29sec which, really, I didn’t think was too bad. If it was at the end rather than the start of the day I’d have better known where I was going and might have been closer. So it was more bloke beats bloke than bike beats car and I can live with that because the idea was to make a great vid. I think we did. You can find it, plus our other favourites from this year, online.

Our favourite 10 videos of the year

McLaren F1 vs P1 vs Senna: To get a McLaren F1 on a circuit is a special occasion. To line one up alongside both a P1 and a Senna is remarkable. One of our favourite videos ever.

Restomods: Alfaholics GTA-R 290, JIA Interceptor R, Tuthill Porsche 911: Old cars get given new leases of life thanks to creative people and some fabulous, if pricey, engineering.

Drag race: BMW S1000RR vs McLaren 720S vs Ariel Atom 4: Superbike meets supercar meets a super car, albeit not a supercar, against the clock on a deserted runway.

Porsche Taycan review: Porsche’s first EV, the Taycan super-saloon, gets driven on the road ahead of its public launch.

Toyota Supra vs BMW M2 Competition vs Alpine A110 vs Porsche 718 Cayman: The sports car test of the year: the new Toyota Supra goes up against its closest rivals.

BMW E30 M3 vs E46 M3 CSL vs M2 Competition: Which is the best M-Car of all time? Just how good is the latest BMW M2 Competition compared with others from the M-car back catalogue?

How to build a supercar / Honda NSX factory tour: Ever wondered how you build a supercar? We went behind the scenes at the US factory where Honda builds the exclusive NSX.

Ariel Atom 4: A wet road trip in the lightweight two-seater

Some GREAT videos this year guys!  I don't always agree with your conclusions but I'm always entertained by the content and impressed with the production values.

Scrambler 'vs' Nomad looked like such a blast to make.  And the 3 x McLarens... sensational stuff.