BACK TO ALL NEWS
Currently reading: Ariel assault: Atom 4 and the Ace motorbike driven
UP NEXT
New Porsche Taycan Sport Turismo on sale from £73,560

The Ariel company returned to its roots when it built the Ace. Does it impress in the same way as the Atom?
Open gallery
Close

I need to level with you: I’m about as useful for reviewing motorcycles as I am for reviewing gas cookers. I use both every now and again but am hardly au fait with the latest technology.

Regardless, here’s me doing the equivalent of telling you what I think about a restaurant kitchen. It’s a motorcycle called the Ace and it’s made by Ariel, which makes the Atom 4 car I’m more familiar with, and which you also see here.

The Atom relaunched the Ariel name in 2000, after it had spent a period of dormancy because it went the way of so many British automotive companies in the 1970s. The Atom is now in its fourth generation and it’s better, faster and more compelling than ever. It runs a 2.0-litre Honda Civic Type R engine, for which Ariel conservatively claims a power output of 320bhp. 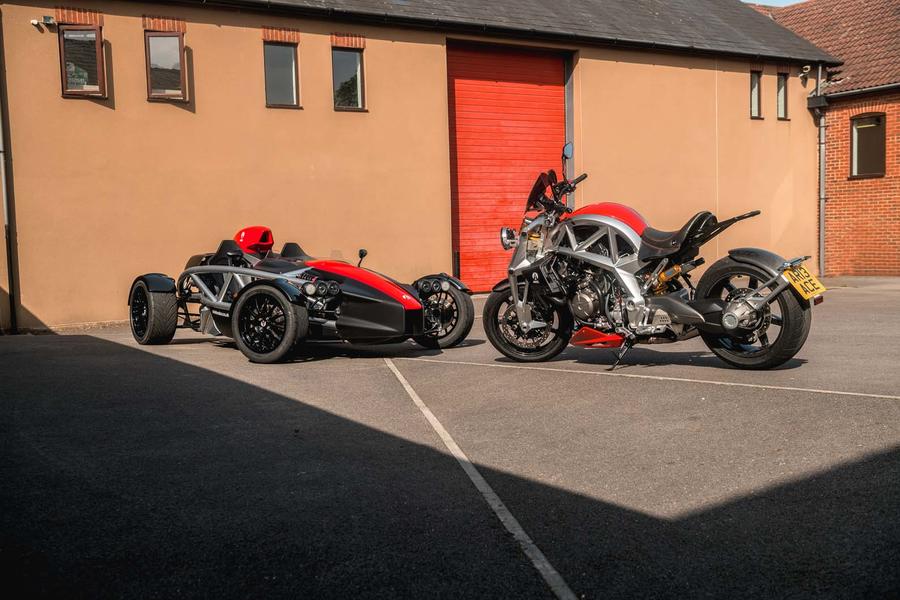 But while Ariel made cars in its early days, it was most famous for two-wheelers. It produced its first 149 years ago: the Ariel Ordinary bicycle, ‘ordinaries’ being what penny farthings were called to differentiate them from the new-fangled chain-driven geared bikes, known as ‘safety bicycles’, because you didn’t have to sit five feet off the ground.

Motorcycles followed bicycles and were Ariel’s mainstay in the mid-20th century, and while Somerset’s modern iteration of Ariel doesn’t do retro, a lot of its staff love motorbikes, making the Ace a logical follow-up.

As logical as a small company designing a motorbike can be, anyway. For one, the engineering space on a bike is incredibly tight. On a car, compromising a few centimetres of space is a conversation; on a bike, a couple of millimetres is a crisis. So the technical challenge is huge. 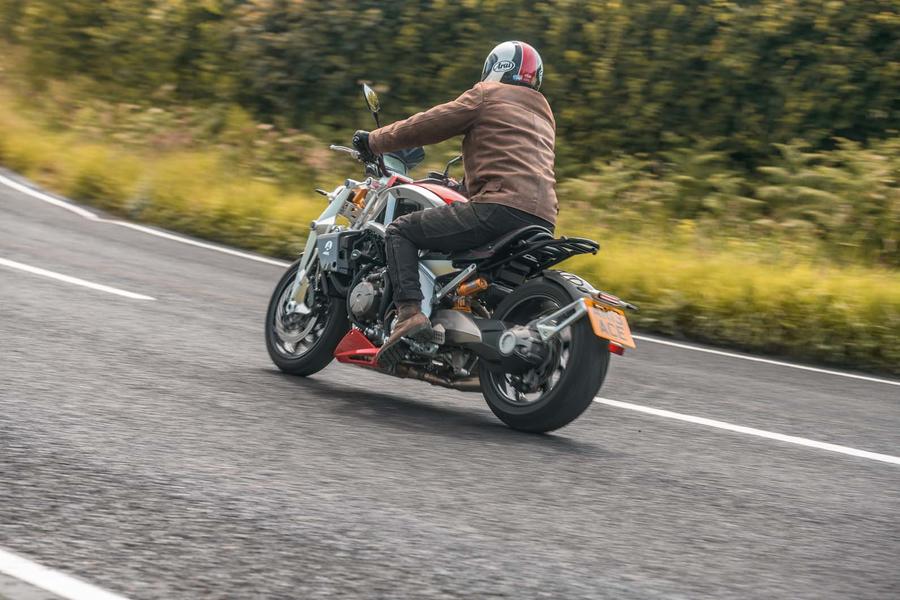 Besides that, Ariel likes doing things big manufacturers can’t or aren’t interested in, and it’s easier to do that with cars than it is with bikes. Bikes are a niche market and all the big players already design things to be fun.

In the end Ariel settled on making an exquisitely engineered, relatively expensive £20,000-plus bike with loads of options. Way more than on the Atom.

Bikes aren’t usually this customisable from the factory. You can spec a BMW R Nine-T as a scrambler, a retro race bike or a naked street bike, but see them in profile and they’re pretty similar.

The Ace takes the concept much further. Whichever Ace you spec, you get an aluminium frame that has been machined for 70 hours, and a 1200cc V4 engine (from Honda, naturally). But there are two different front ends – normal telescopic forks or girder forks – two geometries, three fuel tanks, four seats, options on handlebars, exhausts, foot pegs, wheels and more. The majority of buyers apparently go with something like you see here: a cruiser rather than sportster, with funky girder forks and relaxed geometry. 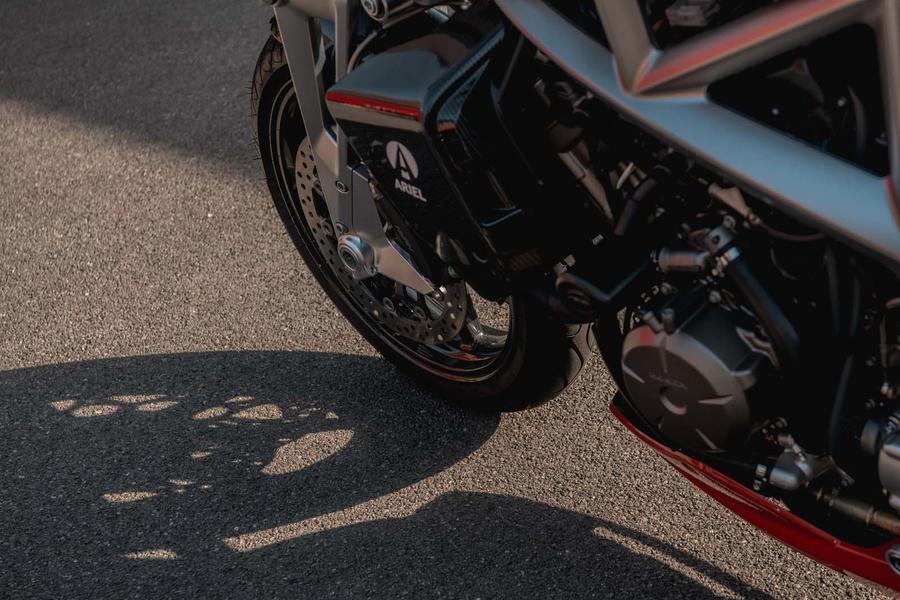 Not that I’m totally relaxed, and a glance at the specification reveals why. The VFR1200 engine makes an incredible noise and 173bhp, and the whole caboodle weighs about 230kg, so the power-to-weight ratio (before rider) is 752bhp per tonne. An Atom 4, one of the most fiercely responsive and accelerative road cars I’ve driven, has ‘only’ 537bhp per tonne.

So in the way that I know commercial gas burners get really hot, I know this bike can go very fast, although in both cases I’m taking it as read rather than sticking my hand over the flame.

I can tell you it’s beautifully engineered and put together, and it is fun and responsive at low speeds. The seat is low, throttle response sharp. I read that the ground clearance isn’t amazing compared to a sports bike’s, but the only time I ‘get my knee down’ is when I’m greasing a chain. But the Ace isn’t a sports bike. 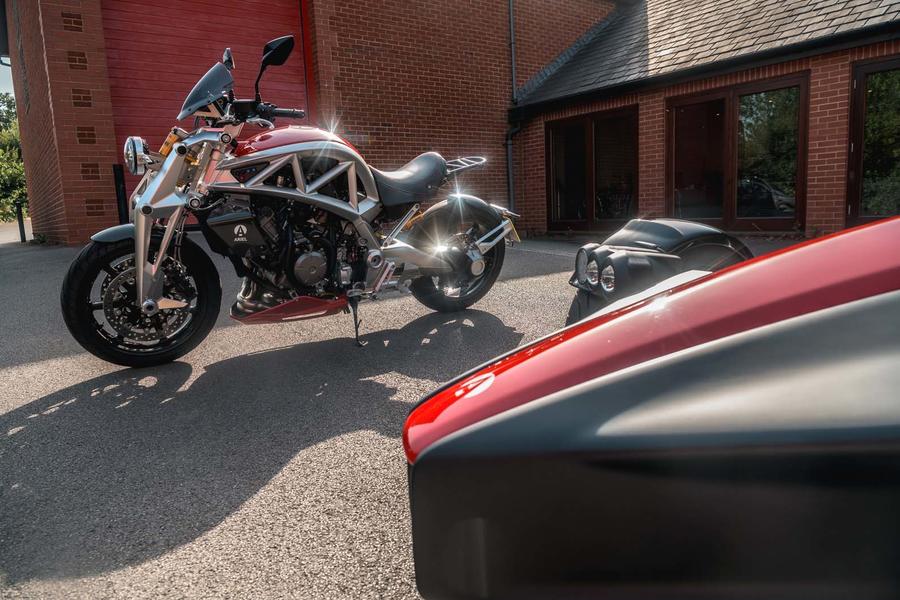 And that’s fine. The Atom isn’t a conventional sports car, either. If all you wanted to do was go really fast, like everybody else does, you’d make it slipperier through the air. What the Atom and Ace share is on-display engineering integrity and a sense of occasion, and nobody else quite does it so spectacularly or appealingly.

Not a sports bike, then. Not sure it’s a cruiser, either. But it’s definitely, unashamedly an Ariel, and all the better for it.

Ariel’s first bicycle was notable for having patented, tension-spoked wheels, and the company had been in business for more than a quarter of a century before it made its first motorised vehicles. They were powered tricycles and quadricycles with only a few horsepower, while its first motorcycle arrived in 1902. Cars were made until 1925, including, in 1908, a ‘grand prix racer’, while in the 1930s the bikes – notably the single-cylinder Red Hunter and 1000cc Square Four – were so successful that Ariel even bought Triumph. 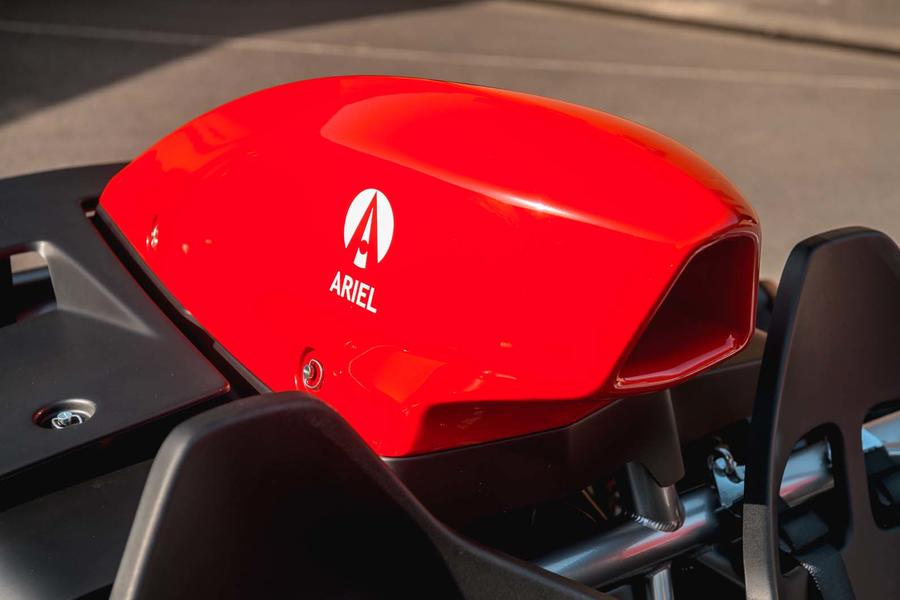 In the 1950s Ariel and Triumph became part of BSA, then not long after Japanese bikes arrived and that was pretty much it for Britain’s motorcycle industry.

The last machine to bear the Ariel name was BSA’s innovative but odd Ariel 3, a 49cc tilting trike which kept its two back wheels on the ground. The design was later licensed but the 3 was a failure.

Ariel Atom 4: a wet road trip in the lightweight two-seater​

Spam filter would be nice Autocar!

Do you actulayy read or monitor your Comments section?

Please let your readers who enjoy your articles and who wish to comment in this community be able to converse without such blatent SPAM.