BACK TO ALL NEWS
Currently reading: Opposite ends of the spectrum: Ford Puma ST vs Lamborghini Urus
UP NEXT
Mini Recharged project to electrify brand's classic models

Opposite ends of the spectrum: Ford Puma ST vs Lamborghini Urus

Are sporty SUVs now mature enough that enthusiasts can enjoy them with no caveats - at any price?
Open gallery
Close

I know what you’re thinking: we’ve lost the plot. It’s just not a fair fight, is it? I mean, how could it be? It’s like asking the well-meaning Old Boys squad from your local rugby club to play 80 minutes against a first-string All Blacks side. The result is only going to go one way, and in an uncomfortably brutal fashion. Yet there’s method to our madness here, because the Ford Puma ST and the Lamborghini Urus have more in common than a 444bhp difference in power and £140,000 gap in price (you could buy nearly six Pumas for the cost of one Urus) would have you believe.

You see, these two are essentially the bookends of an increasingly popular genre: the super-heated SUV. It’s obviously not a new concept (Porsche has been at it for the best part of two decades now), but in recent years we’ve seen an explosion in their numbers, to the point that the majority of new ‘driver’s cars’ launched these days take their design cues from rutted tracks as much as race tracks. Hell, so strong is the apparent allure that when Seat’s hot halo brand Cupra went its own way, its first offering wasn’t a pocket rocket or a sports car but an SUV.

Believe the hype and these cars serve up a multitasking approach to motoring, their Swiss-army-knife-on-wheels shtick promising both thrills on the road and more than a modicum of go-getting, adventure-seeking character that traditionally tuned tin boxes don’t have the ground clearance or go-anywhere gumption to deliver. 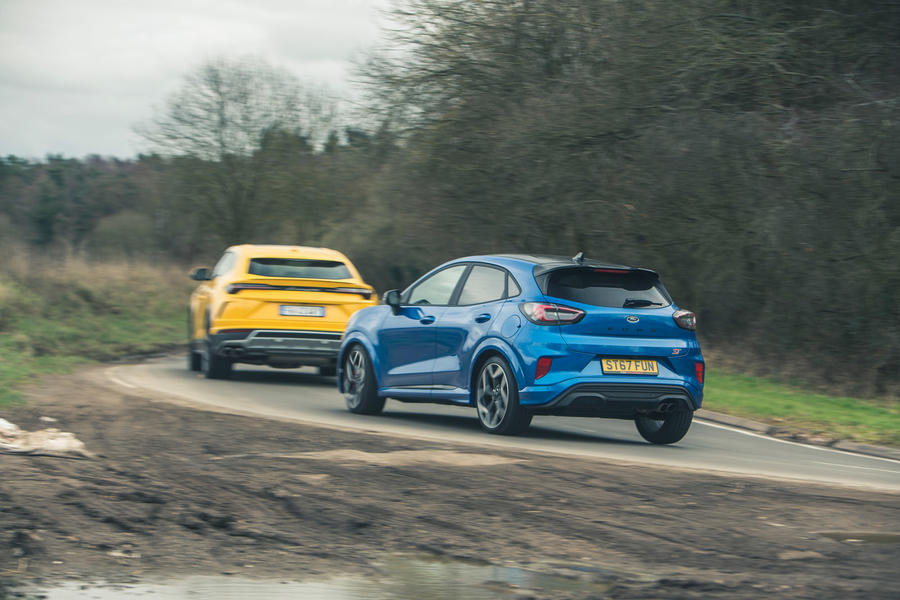 So this is both a straight headto-head and an exploration of the wider impact of such cars. You might be appalled or perplexed by the seemingly never-ending appetite for SUVs or unable to shake off the belief that anything with so much extra heft and height can ever raise smiles and spirits when you’re in the mood for going hard and fast. But do these prejudices marry up with reality? Time to find out.

On looks alone, both of our contenders play on their rough-andtumble influences. The pugnacious Puma’s muscular transformation is particularly effective, its 19in alloy wheels and subtle ST add-ons giving it a more squat stance than the standard car, even if the decision to colour-key the usually grey plastic wheel arches makes it look more like a slightly taller family hatchback than a true crossover.

Either way, it’s dwarfed by the look-at-me ostentatiousness and tape-measure-stretching dimensions of the Urus, which commands attention everywhere it goes. The Giallo Auge yellow paint plays a part, but even if it were finished in ignore-me grey, this vast and angular Lamborghini would have a magnetic effect on eyeballs. Love it or loathe it, there’s no arguing with the high-riding Italian’s towering kerb appeal.

Height, of course, is one of the big draws of cars like these, their increased elevation offering drivers a panoramic vista (and a sense of superiority) plus a clearer picture of the road ahead – something that’s especially useful when it’s unfamiliar. You certainly sit high in the Urus, but while you do look down on other road users, you do so through a letterbox-shaped viewfinder, the low, coupé-like roofline robbing you of some of the usual visibility benefits of a big SUV. 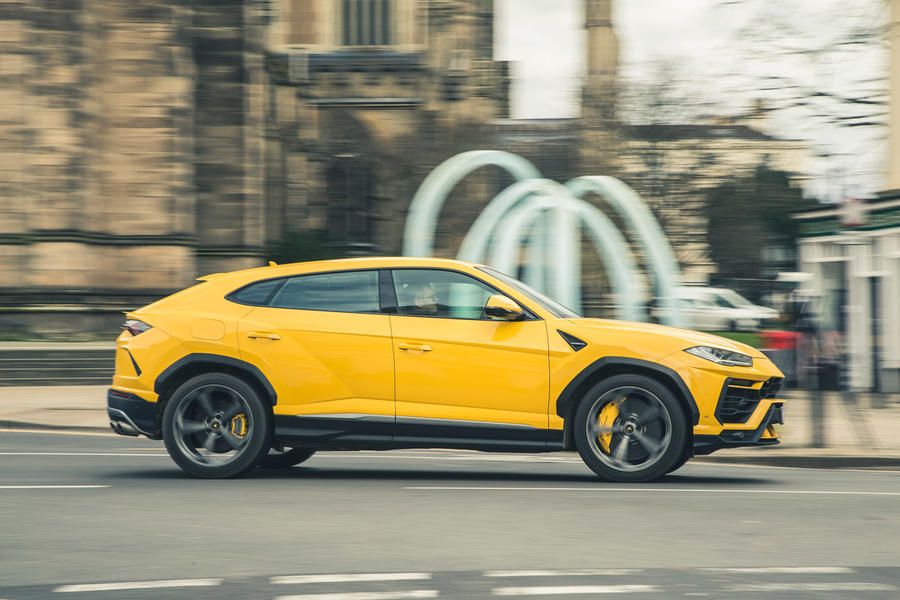 Your outlook is less impeded in the Puma, but like the standard car you’re really only perched a little higher than in, say, a Focus. Still, the deep Recaros clamp you in all the right places, while the short-throw gearshift and neatly arranged pedals compensate for the less commanding driving position.

On typically give-and-take British A- and B-roads, the sporty Puma is genuinely entertaining and can be extended and exploited in a way the super-sized Urus simply can’t. At first, it feels a bit like a Fiesta ST that has had a couple of pints: the character and feel are the same but the actions and reactions are a little lazier and more deliberate.

Push on, though, and you will discover quick steering that engenders real agility, plus there’s bags of grip and a throttle-adjustable playfulness that’s quickly becoming a fast Ford hallmark. Also familiar is the ride, which is just the acceptable side of sharp, although it’s more forgiving than the Fiesta’s.

The Urus is a smoother-riding companion, with its air springs adding some genuine waft when they’re in their softest setting, giving it a luxurious long-distance vibe. Yet flick the driving mode selector from Strada to Sport or Corsa and the focus is instantly sharpened. With the 48V active anti-roll bars keeping everything on the level and the four-wheel steering on its highest alert, the Lamborghini is transformed, its mass simply melting away.

Turn-in isn’t as quick and crisp as the Puma, but the steering is remarkably fast and well-weighted and the car clings onto your chosen line with dogged determination. You’re always aware of the weight, but the trick suspension and steering help put it to the back of your mind, allowing you to revel in its ability to laugh heartily in the face of most of Newton’s laws. 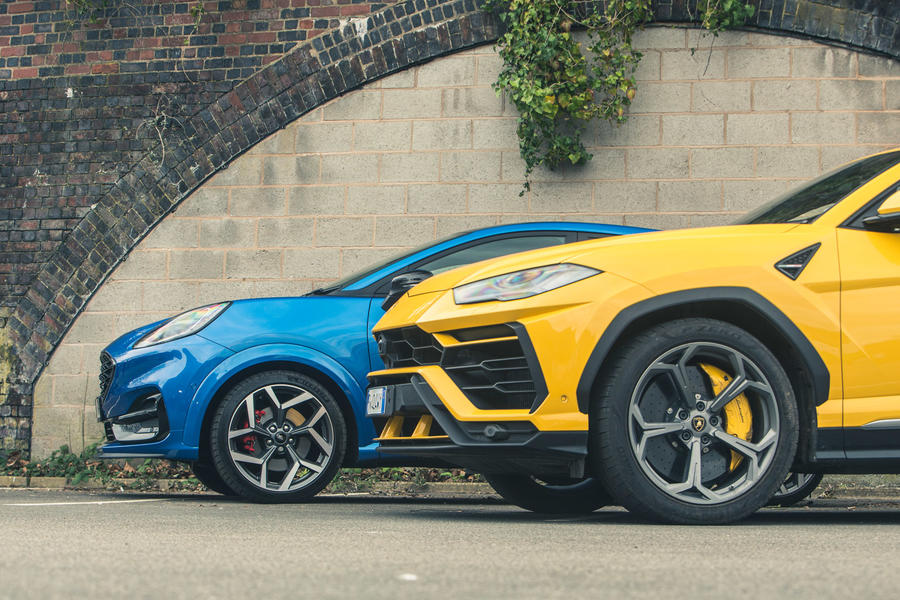 In fact, it’s not a lack of grip or talent that hampers the Urus, more the gargantuan proportions that leave very little breathing space between the verge on one side and white lines on the other. So easy is it to hustle this car that you have to keep reminding yourself that there’s very little margin for error.

It’s only when the roads widen and straighten that the Italian car really gets into its stride. As you would expect, the Puma is left trailing in the Lamborghini’s bellowing and crackling wake, Ford’s gurgly, Fiesta-sourced 197bhp triple feeling a little overwhelmed by the extra avoirdupois of a crossover. It’s a torquey performer and pulls lustily from low revs, but its response feels blunted and lacks the zip and zing experienced in its smaller sibling.

By contrast, Lamborghini’s 641bhp twin-turbocharged V8 is more than up to the challenge of shaking off a 2285kg kerb weight, its demonic forces propelling the Urus with an explosive violence that befits the rampaging bull on its nose. The engine sounds bombastic too, if lacking the searing, operatic quality that makes the brand’s V10s and V12s such an integral part of its lower-slung, less practical offerings.

Of course, Tarmac-shredding pace and mid-corner balletics are all very well, but these cars have a more rugged image to live up to as well. It’s here that, like many of its crossover contemporaries, the Puma stumbles. Yes, it may look tough, but with just front-wheel drive (our ST Performance Pack-equipped car does at least have a limited-slip differential) and Michelin Pilot Sport 4S rubber, the farthest it is ever likely to venture from the beaten track is when it’s parked on your driveway. 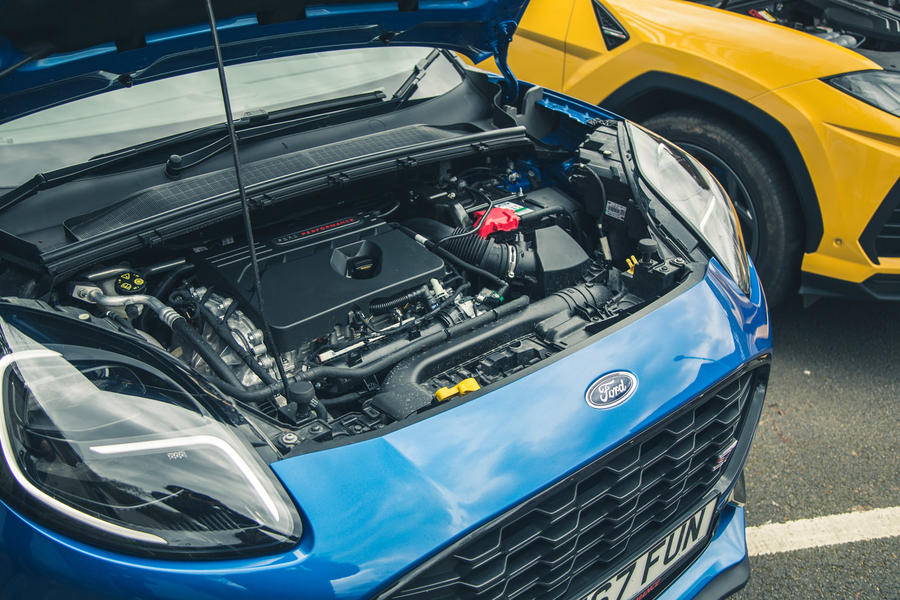 Improbably, it’s the Lamborghini that gives the best impression of a Land Rover, its air suspension allowing its ground clearance to be increased to 248mm, while its four-wheel drive system offers sand, snow and off-roading modes. Whether you would want to risk your £170,000 car and its 22in wheels on a spot of greenlaning is a moot point, but the fact that the off-road ability is real rather than mere visual posturing gives the Urus true all-rounder status.

So, it’s our winner, then? Well, like we said, it’s not that sort of test. For different reasons, both of these cars are flawed. In the Puma’s case because it sits in a bit of no man’s land in the Blue Oval’s brochure, between the feistier, faster and cheaper Fiesta ST and the more family-friendly but barely any pricier Focus ST.

The Urus? Astoundingly capable and improbably exciting though it is, this Audi-infused 4x4 arguably lacks the true soul of a son of Sant’Agata.

Of course, there are also the questions that hang heavier than ever over SUVs of any sort, their weight, size and commitment to conspicuous consumption at odds with very real environmental and social concerns. As for whether we really need fast crossovers, or whether they should even form the basis for a high-performance vehicle, that’s trickier. I’m sure that when, in the late 1970s, a small group of German engineers were lowering a fuel-injected engine into a Volkswagen Golf, there were many voices saying that a run-of-the-mill family hatchback was completely unsuitable as a sports car alternative.

Put all this to one side for a moment, however, and despite wildly different prices and performance, the Ford and the Lamborghini share the same capacity to entertain when you’re in the mood. More than that, they’re good enough that any praise no longer needs to be caveated with the words ‘for an SUV’. Along with cars such as the Cupra Formentor and Volkswagen T-Roc R, they prove that some quick SUVs have evolved (highly so in the Urus’s case) to the point that they can be mentioned in the same breath as more established practitioners of the fast car art.

Log in or register to post comments
si73 11 April 2021
@ Peter, it's not all about the money, it's each to their own, as I said, but unlike the puma, if I could afford the lambo, then I could get a really decent SUV, luxurious and capable, more than likely, and also get a fun sports car as well, negating the need for this, whereas with the puma, its value isn't so great as to be able to buy two cars, one for fun and a family car as well, not new anyway, so the puma actually makes more sense, though personally I'd still take the fiesta or focus as both drive better and are as capable as family cars.
There is no jealousy here as I wouldn't want either, and if someone wants the urus or puma then fair play to them, I'd assume they like it and so bought it, this, being an opinion piece, I am expressing my opinion whilst trying not to devalue others, so again, each to their own.
275not599 11 April 2021
@DDR, an acronym for Didn't Do Research. You need to learn about high performance all season tires like the Michelin Pilot Sport A/S 3+.
Bimfan 10 April 2021

Never ceases to amaze me how much SUV owners/drivers seem to need to justify their choice on the grounds of practicality, or elevated seating or some other half-reasoned excuse.

If it suits you, fine, buy one, but don't expect it to be as 'sporty' as an equivalent car with a lower centre of gravity or less weight to lug round, because it just isn't going to be. After a few attempts at 'sporty' driving, the understeer, the corner lean and the wallow, you will settle back and enjoy that elevated view, practicality and slight sense of detachment.

The fact is that the Puma is not an SUV or a sports car, it is a jacked up, blinged up Fiesta, so don't bother with the ST, get a cheaper version.

The Urus is not a proper Lamborghini sports car either, but it is more of a 'sporty' SUV than a Puma in having adjustable height suspension and four wheel drive. Even so, the Range Rover is still the daddy here.

There really isn't a comparison to be made here, other than these are two rather misdescribed, pricey for their class, 'fashion' cars.