Ford has bolstered its lineup of performance models with the addition of the Puma ST, the brand’s first European-market SUV to gain a dedicated performance range-topper.

Priced from £28,495 and available to order now, the hot Puma is the fourth entry into the ST range in Europe, joining similarly conceived versions of the Focus hatchback, Focus estate and Fiesta supermini, and is significantly reworked from the standard Puma that went on sale earlier this year.

The mild-hybrid 1.0-litre three-cylinder turbo petrol engine has been swapped out for the 1.5-litre turbo unit used in the Fiesta ST. Power output is unchanged at 197bhp – 46bhp more than made by the most potent Puma currently available. However, torque has been boosted from 214lb ft to 236lb ft, giving more linear acceleration and enabling the larger and 96kg-heavier Puma ST to match the Fiesta ST’s 0-62mph time of 6.7sec.

As in the Fiesta ST, the all-aluminium engine sends its reserves to the front axle via a six-speed manual gearbox. It’s equipped with a radial-axial turbocharger and integrated exhaust manifold for reduced lag, twin-independent variable cam timing and roll-restricting engine mounts designed to improve refinement and cornering performance.

While the Puma ST goes without the standard Puma’s mild-hybrid system, cylinder deactivation functionality can shut down an unneeded cylinder in as little as 14 milliseconds, helping to save fuel when coasting or cruising.

The Fiesta ST’s active exhaust valve technology also features, but it has been tuned to offer a “more composed cruising experience”, meaning the Puma ST is roughly one decibel quieter. 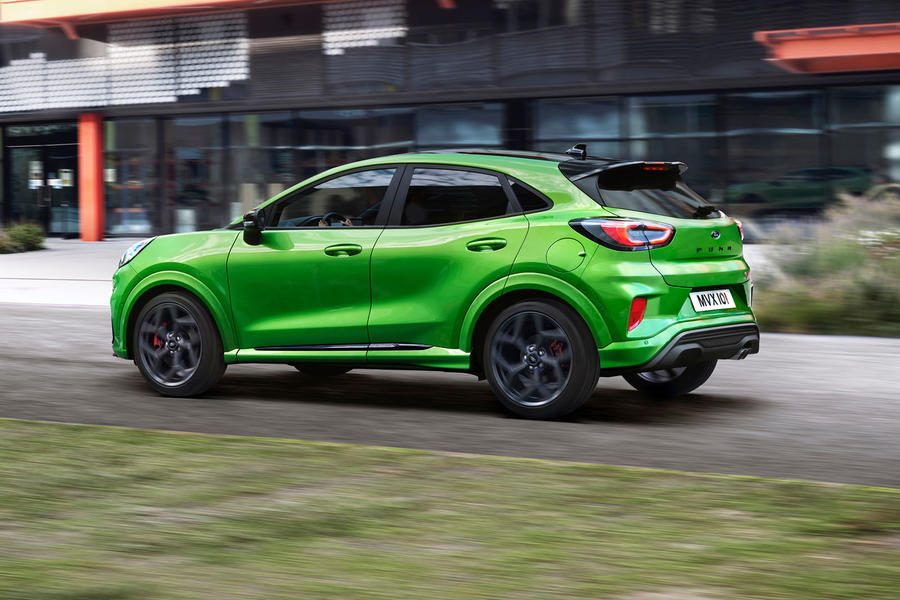 In what Ford is calling a first for the hot crossover segment, the Puma ST also gains a mechanical limited-slip differential, which works alongside a torque-vectoring system to minimise understeer and optimise grip. Further dynamic upgrades come in the form of new ‘force-vectoring springs’ that improve lateral stiffness at the rear, a rear twist beam that’s 50% stiffer than on the standard car and new anti-roll bars at both ends.

The steering has been uprated, too, making it nearly 25% quicker than on the standard Puma, while the front brake discs are 17% larger for improved stopping performance.

Like the standard Puma, the Puma ST offers Normal, Eco and Sport driving modes, but it swaps the Slippery and Trail functions for a hardcore Track mode, in which the traction control is disabled, the stability control does minimal intervention and all systems are tuned for “the fastest possible lap times” and “the purest driving experience”. An optional performance pack, costing £950, brings a launch control function that improves response off the line and comes with its own dedicated graphical display in the instrument cluster.

Like its Focus and Fiesta siblings, the Puma ST features only subtle visual clues to its performance aspirations. At the front, there’s a new front splitter that bears the branding of the Ford Performance division and is said to improve front-end downforce by almost 80%, plus a revised lower grille that improves cooling.

The rear end gains a new colour-contrasting diffuser that houses twin tailpipes, and the package is rounded off with a set of bespoke 19in alloy wheels wrapped in specially developed Michelin Pilot Sport 4S performance tyres. The roof, grille, side trims, wing mirrors and roof spoiler of the Puma ST are all finished in gloss-black as standard, while the body can be painted in a new, model-exclusive Mean Green shade. 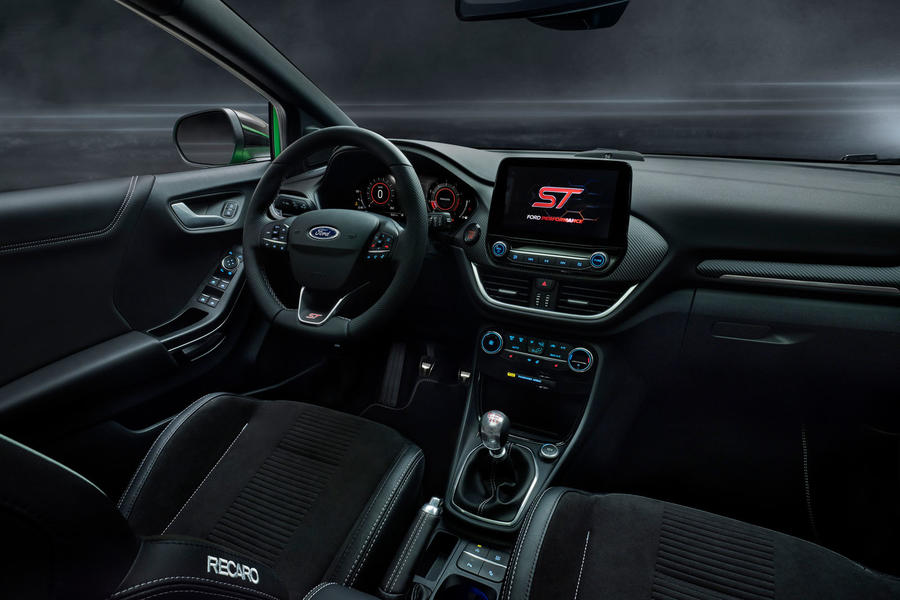 The interior is largely familiar from the standard Puma, but ST-branded Recaro sports seats in the front, bespoke treadplates, a flat-bottomed steering wheel and an ST gearknob set it apart. A wireless smartphone charger, heated windscreen, front and rear parking sensors and smartphone mirroring are all equipped as standard.

Customer deliveries are set to get underway before the end of this year, with efficiency figures due to be published closer to the on-sale date.

What next for Ford Performance?

Ford’s performance offering in Europe now comprises hot versions of the Fiesta, Focus and Puma alongside 2.3-litre and 5.0-litre versions of the Mustang and the hardcore Ranger Raptor pick-up truck (the GT supercar is now restricted to the US).

We know there won’t be a RS version of the Focus, due to emissions concerns, and a Kuga ST is extremely unlikely, but that’s not to say the fast Ford is an endangered species.

The brand’s European design chief, Murat Gueler, previously told Autocar the new Mustang Mach-E SUV could spawn a range of electric performance cars under the Mustang banner. “The Mustang and the Porsche 911 are the most famous sports cars on the planet,” he said. “Mustang is a big nameplate, and it’s about time we applied electrification to it.”

Certainly, the 1399bhp Mach-E 1400 prototype and 1381bhp Mustang Cobra Jet 1400 drag car suggest the Performance division is investigating what can be achieved with an electric powertrain.

As for combustion cars, we will likely see facelifted versions of the Fiesta ST and Focus ST following updates to the standard models, while the Mustang itself is set to make the landmark shift to hybridised V8 power in 2022. It will remain on sale in Europe following the global success of the current S550 generation.

I like the colour on this, but it seems a huge amount of money for a tall Fiesta, but as others have pointed out, its much better value than the VAG or PSA small tall things.

As for the interior, i prefer real buttons, and this thing still has a proper hand break too, and great looking seats. maybe the plastics could be better, but if that explains it being decent value, good for Ford

Has already the mentioned the T-roc, but this has surely got to have the same point to point pace as the VW but for a fair bit less £££
Laos 24 September 2020