Diesel. Thought it was dead, didn’t you? And maybe it is. Sales have been down in the UK for the past 26 consecutive months and, anecdotally, more of the new cars arriving at Autocar road test headquarters now read 95RON on their filler caps; 98RON if we’re lucky. But try telling this to Audi.

Audi spent millions (billions?) winning Le Mans time and again with smooth and bizarrely quiet TDI thrust, and now it’s fitting sophisticated diesel engines to its aspirational road cars. Models such as the S6 saloon and Avant, which only two generations ago used a normally aspirated 5.2-litre petrol V10 shared with Lamborghini. The S7 Sportback didn’t exist in the glory days of Audi’s supercar-engined but otherwise amusingly low-flying exec saloons, but it’s of the same ilk as the S6 and fundamentally they’re the same machine. It’s why the new S7 Sportback now also gets nothing more exotic, enticing or enthralling than a medium-sized V6 diesel. 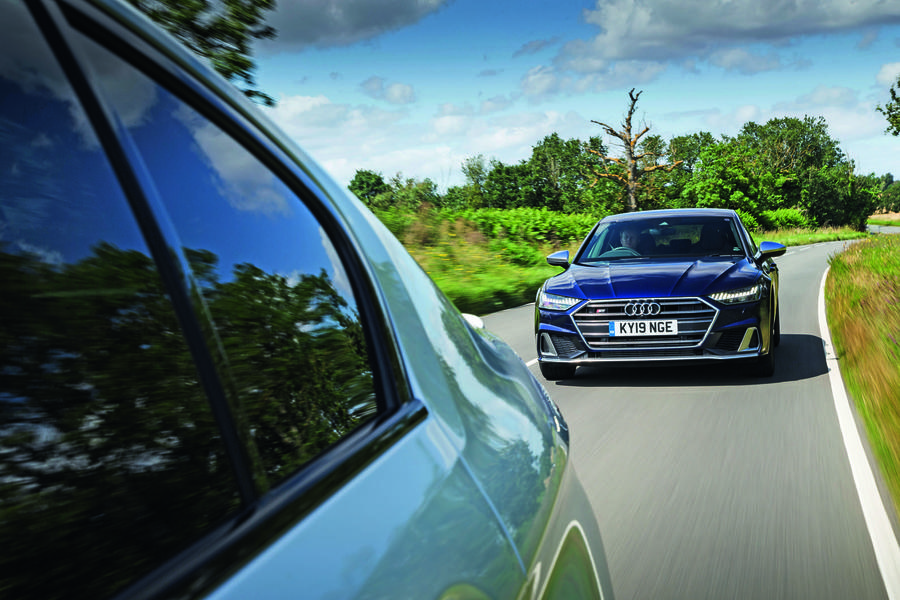 Madness or masterstroke? Anyone craving unleaded performance will soon have the option of the RS7 – which packs around 600bhp and is faster and firmer than ever before – so perhaps the S7 can thrive as a sub-sonic diesel express. And yet even if you ditch the exciting engines, Audi’s S moniker still needs to mean something to the person paying over £70,000 after options.

Which is why today we’re putting the S7 up against Mercedes’ aristocratic CLS 400d 4Matic and the lesser-spotted but dynamically very well-sorted Alpina D5 S. These cars have different identities but a shared philosophy: namely, that in the real world, big diesel four-doors can be almost as quick and just as desirable as their pumped-up petrol counterparts, only more refined and much more economical. In terms of crucial ‘fitness for purpose’, their case is stronger more of the time than for the 600bhp car that flirts with single-digit fuel economy the moment you explore its potential. 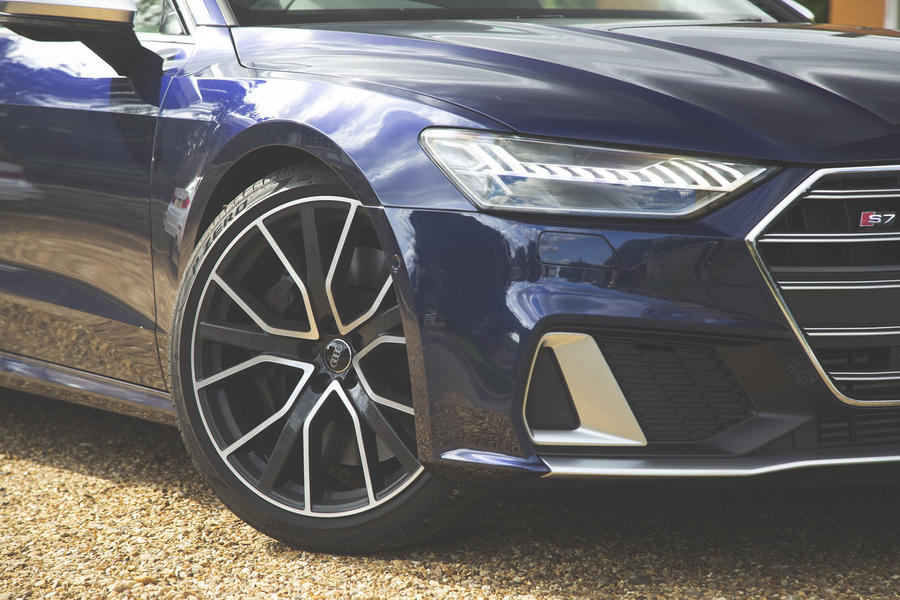 The Audi S7 has pace, refinement and quality, but lacks ultimate feedback

At £68,000, the S7 Sportback is by £6000 the most expensive car here, but it’s an otherwise cosy clique: six-cylinder engines, four-wheel drive, easily more than 300bhp and, in the case of all three, precisely 516lb ft served up ‘from the basement’, as one nameless Autocar tester once put it. The Audi uses a dual-clutch gearbox whereas the others have automatics, and it’s the only car here with rear-wheel steering, although that is an option on the Alpina.

As you notice straight away in the metal, the Audi is also the longest, widest and lowest car here – marginally more so than the Mercedes, with the more conventionally proportioned BMW 5 Series-based Alpina a little way off either. But none stands out as a design marvel. The inoffensive CLS underplays its hand as a sophisticated ‘four-door coupé’ whereas the S7 Sportback chokes a good degree of its natural elegance with an enormous grille and odd details such as the halfhearted diffuser. Meanwhile, the D5 S sports Alpina’s usual aerodynamic fastenings and, unlike the Audi, its four exhaust tips are genuine. It looks the most serious, although you can nevertheless see why someone might go for the sleeker cars. Their level of presence marks them out as something unusual and quite special. 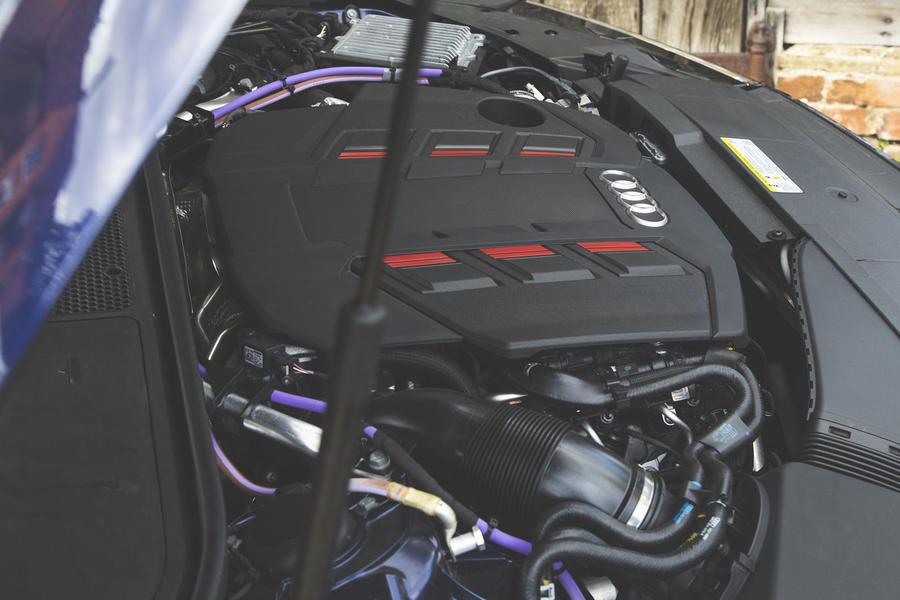 We should now talk about the Audi’s new 3.0-litre V6 TDI. The block is ordinary in the sense that you’ll find it on regular models such as the A7 50 TDI but the pistons, conrods and crankshaft are all upgraded. There’s not only a variable-geometry turbocharger fed by exhaust gases but also an intake-side electric compressor that doesn’t require gas flow. It spools to 70,000rpm in an instant and, in theory, covers off the old-school turbocharger’s more laggy response. Beyond 1650rpm, it’s an ornament, being primarily designed to give sharp step-off and acceleration from low engine speeds, and can react so quickly because it’s driven by a 48V system whose lithium ion battery resides under the boot floor. That’s right. Never mind a big-capacity V10: the medium-rare Audi four-door of 2019 is a diesel mild hybrid. There’s also a battery alternator/starter connected to the crankshaft. It can scavenge electrical energy during deceleration and get the V6 going again after periods of engine-off coasting. Fit for purpose in the real world? Almost 35mpg combined and 344bhp suggest that’s very much the case.

The first stint in this test takes us straight into an area where these cars need to excel: motorway driving. Refinement starts with comfort and here it’s difficult to look past the Mercedes, whose leather chairs have the sort of deep, low-set curvature that makes it feel by far the most GT-esque. The leather steering rim is wide, thin and firm – old-fashioned but good to hold. 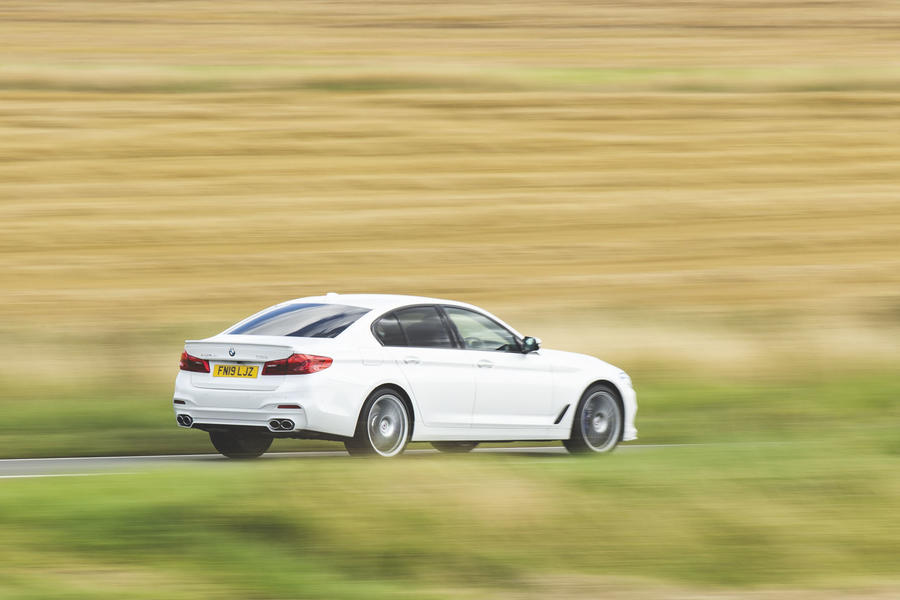 The Alpina is also supremely comfortable, feeling more materially rich than either of the others and with switchgear that’s simpler and more elegant. What you don’t get is the sensation that you’re sitting in a car with a particularly sporting persona, which, of course, you’re not. Alpina might work wonders with the suspension, hone the handling and massage BMW’s turbocharged straight six (adding another turbo in the process), but the car’s architecture is still 5 Series and so it can’t shake its trad-saloon feel.

By comparison, the broad Audi feels smothered into the road even at a standstill – a theme accentuated by the horizontal vanes in the dashboard, which also houses a pair of impossibly sharp touchscreens. It’s more impressive than endearing, though. The ambience is a bit cold, and with its flat-backed seats perched high, there’s a fantastic view down the road over the low scuttle, but you never feel embedded in the car as you immediately do in the others. 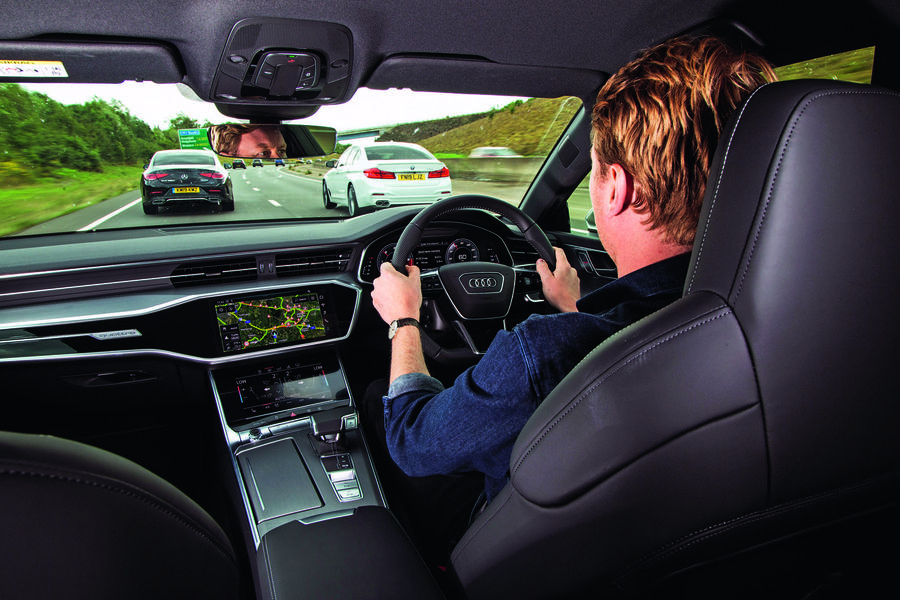 Boy, it can cruise, though. At 2050kg, it’s easily the heaviest here, but on the M1, the extra weight only helps the Audi deliver its imperiously unruffled gait. You can order an S7 with air springs – this one is on steel coils with adaptive dampers – but I’m not sure how much it would improve things, if at all. Either way, it easily gets the better of the Mercedes, whose 20in wheels and run-flat tyres combine to thwart the delicate control provided by its standard-fit air suspension. It’s simply too keen to map the details of the road surface into your palms and thighs, wonderful driving position or not.

But now it gets a bit awkward. The D5 S shouldn’t really be here, but its comparatively dumpy Bavarian form hides a chassis that rides UK roads better than either of its indirect and newer rivals. There are times when the front axle can labour rough surfaces more than it should, but at speed, the suspension damps into oblivion the pitter-patter experienced in the Mercedes and makes you wonder if the Audi’s body control is a touch closer than it needs to be.

However, all three cars benefit from a surfeit of performance at lower revs. Gliding into the outside lane to overtake is so effortless, and each will healthily amass speed without constantly grasping for lower gears. All three also return a touring economy of around 55mpg, for a motorway range of 800 miles. 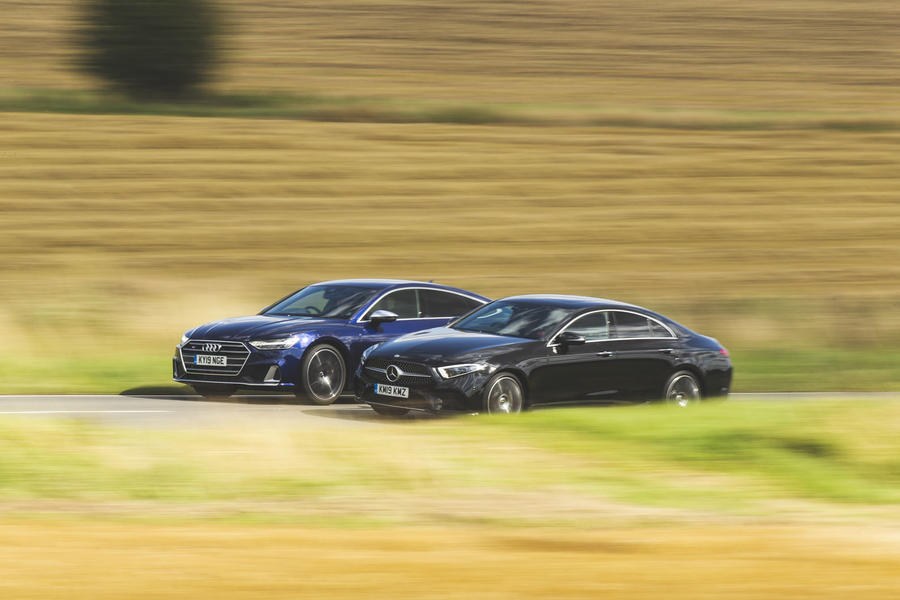 On more technical roads – the sort any prospective S7 Sportback owner could rightly expect to get stuck into – the Audi springs something of an ambush. In terms of agility, it leaves the softer Mercedes for dead. Although the Mercedes summons a more natural flow, it can feel lethargic by comparison and uncomfortable if pushed beyond its dignified comfort zone. Even on the road, the brakes give up early and it will roll haplessly into understeer before its compatriot is even properly warmed up. An official AMG model would do much better, but at this price point, there exists no such thing. Point to point, the Audi’s out of sight, its sound-enhanced 3.0-litre V6 spinning with enthusiasm.

So Audi fells Mercedes? If only it were that simple. The CLS 400d’s straight six might be more rugged in character, but the torque delivery is even more progressive and easier to modulate at low speeds. The Audi also achieves its agility with four-wheel steering, hair-trigger steering response and an assertive brand of body control, all of which can make the driving experience feel binary. You program it to splice through a corner, rather than guide it with your hands. Such an unstickable front axle means the Sport differential can aggressively tighten the car’s line and even induce oversteer with relative ease, but again, it’s as though a switch has been flicked. Is it exciting? Actually, yes. Surprisingly so, but the Mercedes counters with much more authentic steering and natural poise. 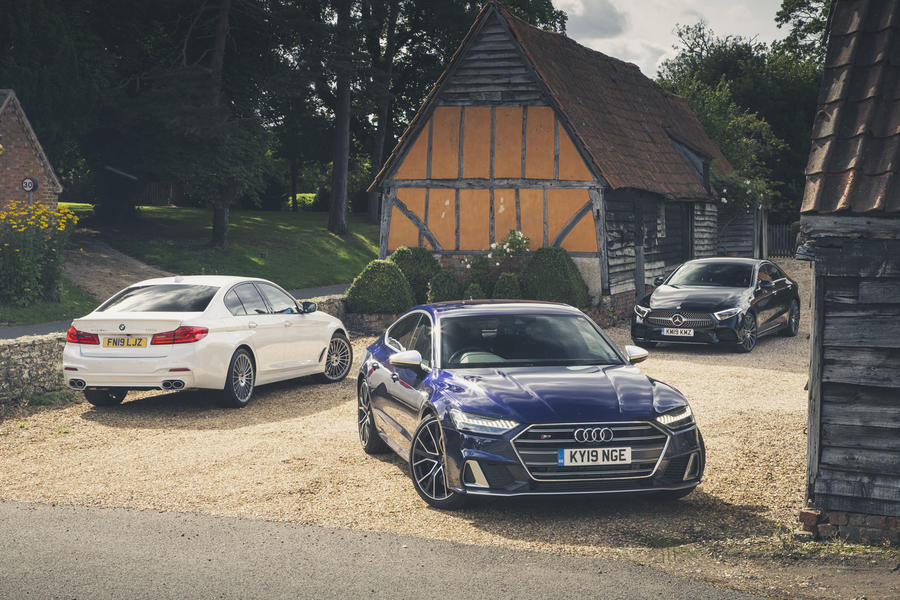 Ultimately, both cars are decently expressive and, crucially, respond well to being stroked down a road on a wall of easy-access torque. On the pace-practicality-efficiency continuum, it seems a powerful diesel four-door is still untouchable. Old news, I know, but it remains relevant. Older news still is that Alpina really knows what it’s doing when it comes to this sort of car. Steering feel in the D5 S isn’t a match for the Mercedes’ and it can’t quite mimic the shark-nosed direction changes of the S7 Sportback, but the rack is well weighted and body control on par with the Audi’s – the suspension only moving with greater elegance and real progression, making the car sweeter to drive harder and more accurately, right up to the limit of grip. All three cars impress, but while none is especially memorable, the Alpina knits together its strongest attributes to the most convincing effect. Also possessing the most linear and cultured diesel engine of the three, it wins this test. 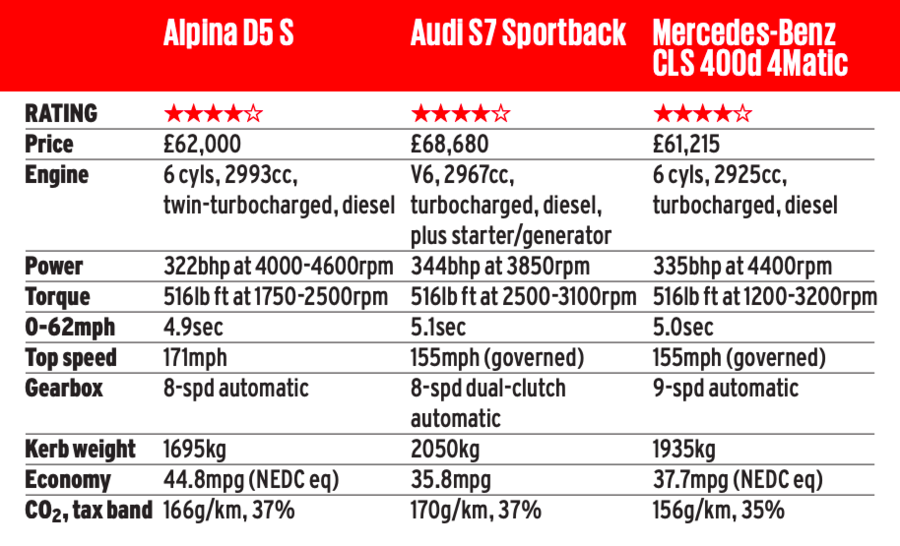 Used alternatives from £9000 up As heavy as a house but hilariously quick, the Panamera 4S had the capability to demolish both a winding road and a potential 600-mile range. Rear-biased all-wheel drive, too. 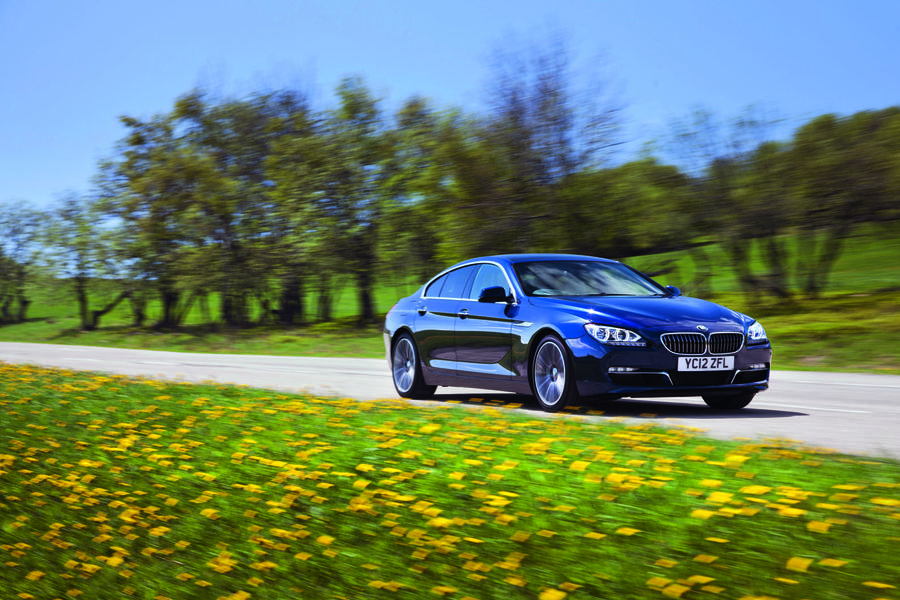 The consummate all-rounder and the most gentlemanly BMW for many years, the 640d Gran Coupé went like stink without any undue ruffling of feathers. Today, it’s a used car bargain. 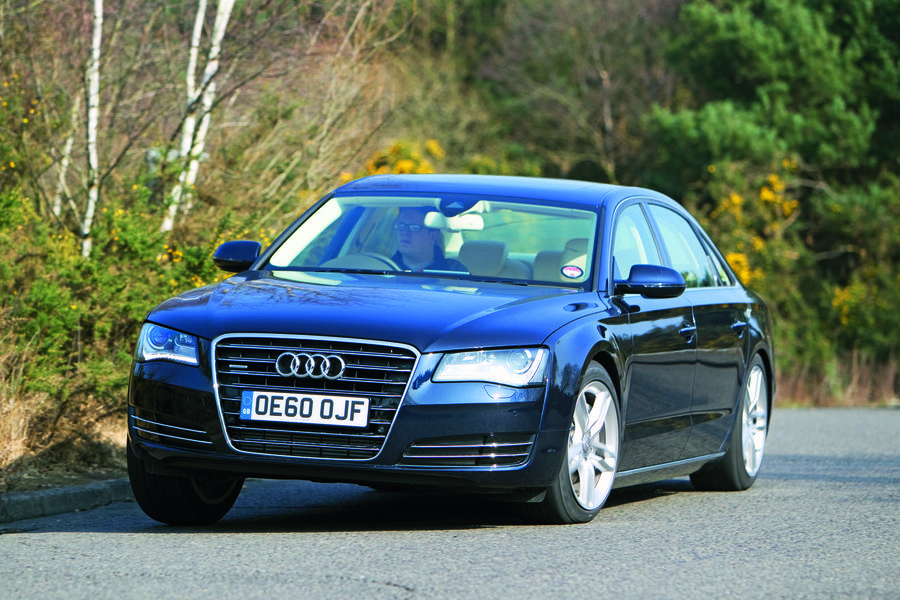 It weighed over two tonnes and looked a bit plain Jane but the A8 had a diesel V8 that produced 590lb ft of torque to take this spacious luxury limo to 60mph from a rest in just 5sec. It’s quiet as well. It’s a breath of fresh air to find an Italian sporting marque in this mix, especially one with such an exotic badge. This thoroughbred will also have the range to complete the entire Targa Florio on one tank. 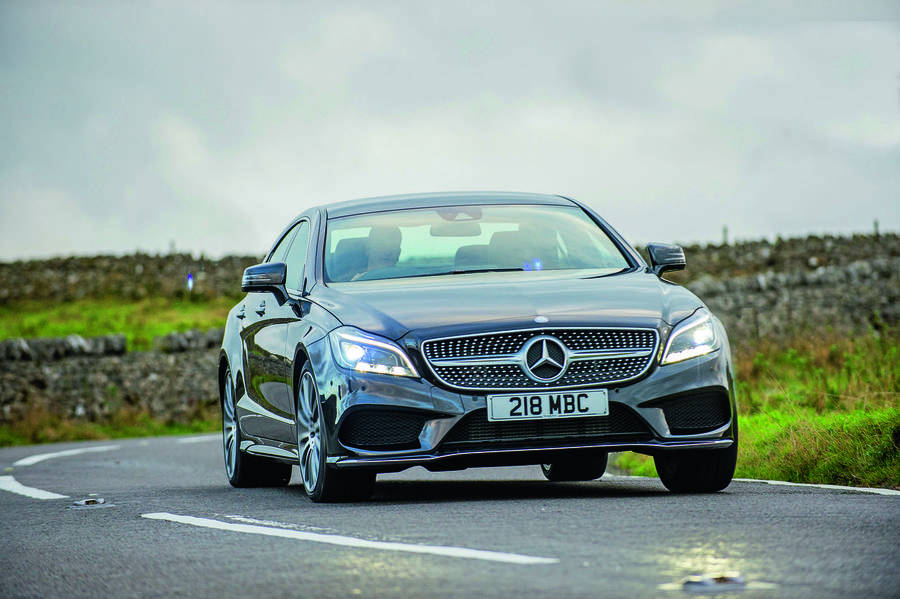 Affordable performance saloons don’t come much more stylish than the CLS and that silky smooth V6 diesel is a gem. Plus those comfy chairs will soothe the burden of travel as you cross a continent.

This article was originally published on 21 September 2019. We're revisiting some of Autocar's most popular features to provide engaging content in these challenging times.

Over the past year or so there has been plenty, if you go by the stats, the Alpina seems the better choice, as for looks, it's our choice.

...a V8 diseasel of any of these cars - turbocharged, naturally - I might've been tempted.

I'm curious, what car do you drive?
View all comments (10)