From £48,8807
The new Audi A7 Sportback looks the part, but how does the new Mercedes-Benz CLS rival cope on UK roads? We find out
Open gallery
Close

The idea of a five-door coupe is a bit of an odd one, if only because by definition it seems to be a touch oxymoronic. Say the word “coupe”, after all, and the image you’ll likely conjure is one of a car with just two doors.

However, since the original Mercedes-Benz CLS rocked up on the scene back in 2004, the practice of taking a regular saloon, giving it a swooping roofline and labelling it a coupe has caught on in a big way. So much so that there’s now such a thing as an SUV coupe. Who’d have thought?

This latest four-door coupe you see before you is the second-generation Audi A7 Sportback, which has been totally redesigned from the ground up to take on the new version of the CLS. We’ve already tried this particular model - the 50 TDI quattro - out in South Africa, but now we’re putting it to the test back on British roads for the first time.

For those of you who maybe haven’t quite fathomed out Audi’s perplexing new naming structure (this tester is one such person), “50 TDI” means this A7 is powered by a 3.0-litre V6 diesel that sends its 282bhp and 457lb ft of torque to all four wheels via an eight-speed automatic transmission. There’s also a 335bhp V6 petrol - badged 55 TFSI - available from launch, although the oil-burner is expected to account for the lion’s share of UK sales. 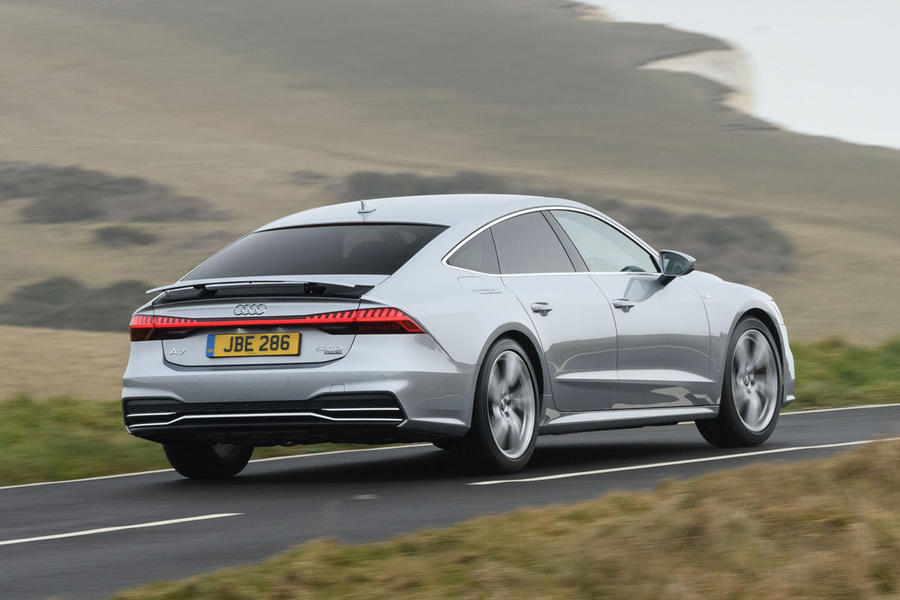 Similar to the new CLS, mild-hybrid technology has made its way into the latest A7. This comprises of a 48-volt primary electrical system that can allow the Audi’s V6 to shut down when coasting between 34 and 99mph, using a belt alternator starter to restart the engine when you touch the throttle. Coupled with improved stop/start technology that uses the front cameras to detect when the car ahead of you moves away, fuel consumption is said to be improved by 0.7 litres per 100 kilometres - an additional 62 miles in old money.

On the road, the technology works rather well. Haptic feedback from the throttle lets you know the time is right to lift your foot off the pedal, with the engine cutting out a split second afterwards. Were you not looking keenly at the rev-counter on the 12.3-inch Virtual Cockpit LCD screen - which is standard fit across the A7 range - you’d likely not notice the fact the engine cut out in the first place. The Belt Alternator Starter that restarts the engine is similarly unintrusive.

Unfortunately, the same can’t be said of the manner in which our Sport specification test car’s optional sport suspension controlled the car’s ride. At low speed, the A7 feels jittery, with the firm set-up sending a tiresome amount of vibration to your backside. This was mitigated slightly at speed, although undulations do cause the suspension to compress in a jarring manner.

A solution - which we’d advise going for - is to spec the optional adaptive air suspension, which makes the A7 far more comfortable and compliant on less-than-stellar road surfaces. Just be prepared to part with £2000 for the privilege. As a side note, though, Audi curiously didn’t have any A7s with the conventional steel spring suspension available for testing.

While the A7’s ride might not be exactly stellar, at least the cabin is a comfortable place to be. It’s all very modern and futuristic, with the new dual touchscreens for the infotainment system lending the interior a very minimalistic feel; physical switchgear is few and far between here. Build quality is sound - as you’d expect from Audi - and there’s plenty of adjustability in the seats and steering column.

Those in the back will have little to complain about, too; although the middle seat is thoroughly unsuitable for anyone other than children, owing to the large transmission tunnel and the fact that your head immediately comes in contact with the roof.

Noise from the 3.0-litre diesel engine is well isolated at a cruise, and even under heavy acceleration the sound it produces wouldn’t be best described as unpleasant. It’s deep and bassy in its timbre, and fits in well with the A7’s sophisticated character. It’s also respectably quick; its 457lb ft of torque is available from just 2250rpm, so overtaking moves are dispatched with ease. 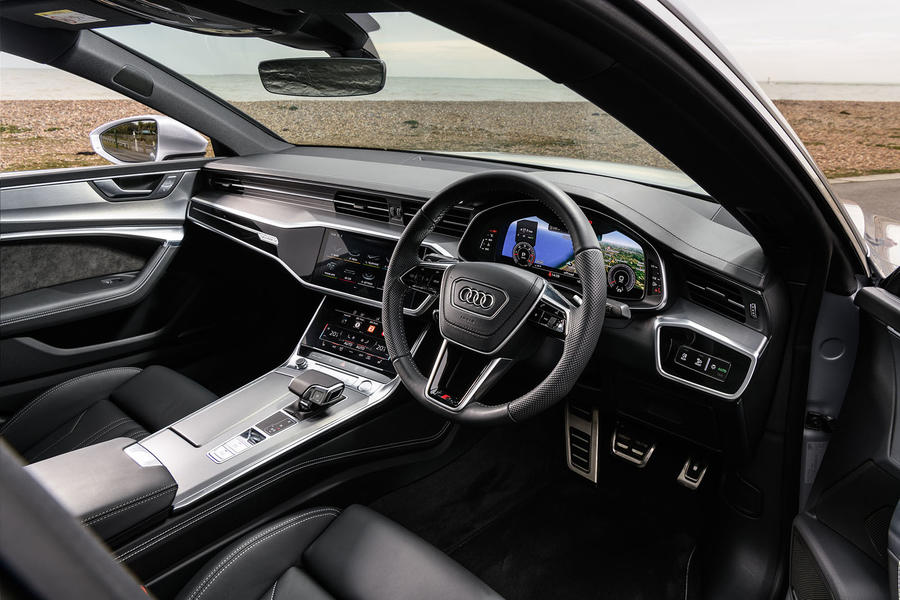 Muscular, sporting looks aside, the A7 isn’t really the sort of car that’ll have you looking for any excuse to get behind the wheel and go for a drive. It’s quick but not ludicrously so, it handles keenly but not in a particularly engaging or exciting way, and while the adaptive air suspension does make it a largely comfortable car, you’ll have to part with £2000 on top of the car’s £54,940 asking price to get it.

On the flipside, though, you’ll get a plush, comfortable cabin, plenty of on-board tech and, of course, the prestige that comes along with that Audi badge. As an added bonus, the A7 is also forecast to hold its value better than comparable versions of the Mercedes CLS and BMW 6 Series Gran Turismo. So while its ride might be a touch harsh on your backside, at least the depreciation will be a bit more forgiving on your wallet. 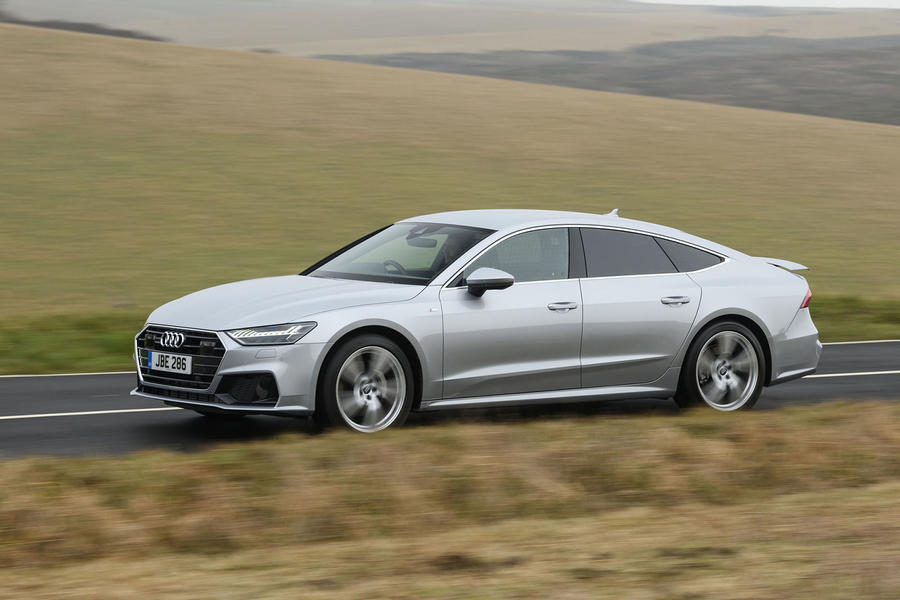 A coupe is a 2 door car. This is a 4 door car with questionable styling.

Coupe - as in french for cut

Coupe - as in french for cut down, not necessarily to less number of doors - so the CLS is a cut down E, and the A7 a cut down A6. Somehow we went decades with most coupes being 2 doors and corrupted the word in automotive terms but wasn't alwasy 2 doors.  Like the 1965 P2 Coupe...

Based on pictures I see alone, Audi have failed to get the second gen styling as right as the first, just as Merc failed with second gen CLS..

You have not explained the '50' fully. I think this is the result of to much pen tapping by Audi marketing. The 50 tells you that the specific power output is between 282-308bhp; that's not very specific ! Here is the Audi number powert range -

Ooh dear, that rear end isn't very attractive is it? And I don't suppose the bumpy ride is going to help when you're trying to use that touchscreen to adjust the climate.