Sales of diesel-powered cars are falling, but does this mean petrol is really best?
Share
Open gallery
Close
Share story

The reason Porsche no longer offers diesel engines in any of its cars is that it was never a core power source for the brand, and now diesel is in decline it makes sense to focus on the petrol, hybrid and electric powertrains that are its future. At least that’s the official version. And I’m sure Porsche’s desire to distance itself from the Volkswagen Group’s latterly besmirched reputation for producing good, honest diesels had absolutely nothing to do with it.

Whatever the truth, Porsche’s decision to turn its back on diesel is an enormous gamble, at least in Europe. Certainly key to Porsche’s thought process is that diesel makes no impact at all on its biggest markets outside the continent – such as the US, China and Japan. But now that Porsche is predominately an SUV manufacturer (between them, the Macan and Cayenne accounted for more than 60% of Porsche sales last year), and SUV sales in Europe are still predominately diesel, you can see that cutting yourself off from such customers would be tough, even for Porsche. 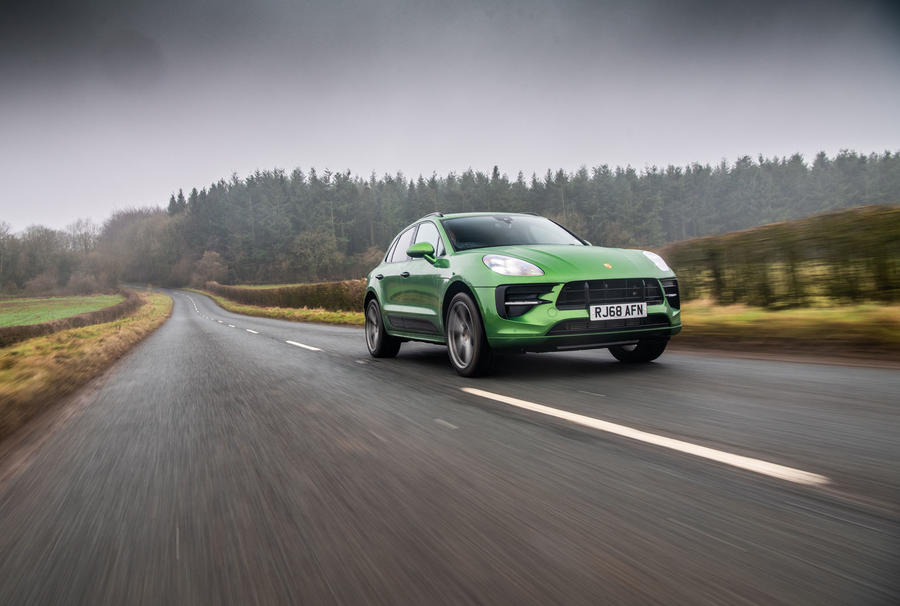 But will it? What Porsche would like its diesel customers to do is simply accept their preferred fuel has had its day and, such are the advances in petrol technology, there is little to lose and much to gain by replacing, say, their old Macan Diesel S with a new 2.0-litre petrol Macan. Like this one.

We felt a need to put this theory to the test, hence the presence here of another new SUV, but one powered by the black pump. I’d say a diesel-powered SUV is no more true to Alfa Romeo heritage than it is to Porsche’s, but Alfa is sticking by diesel, for now at least. 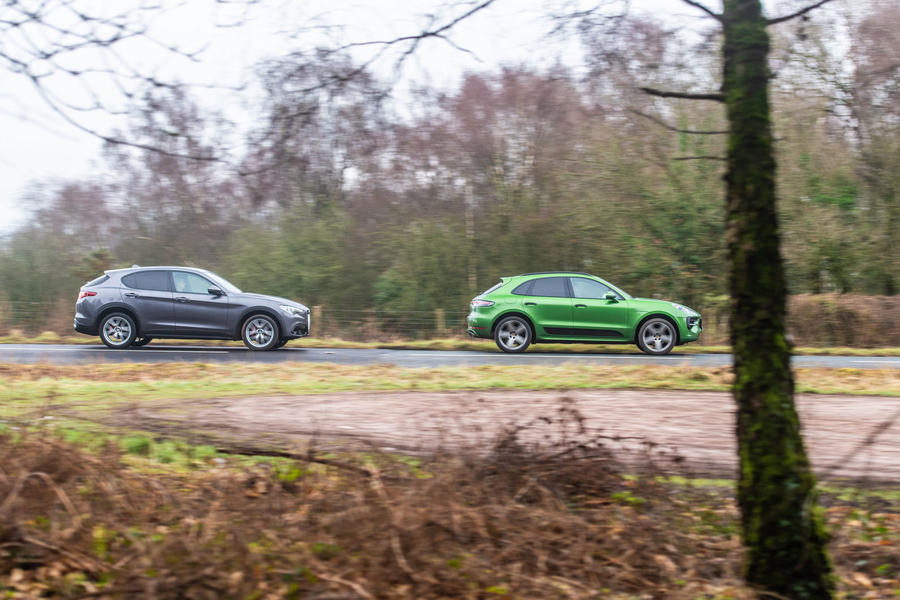 On paper, the diesel Stelvio and petrol Macan make an interesting pairing. Similar in price, performance and engine size, the diesel Alfa leads as expected with a healthy chunk of additional torque, the Macan with a commensurate power advantage. But before we put theory into practice, a thought or two about what’s actually being fought over here. The first thing to say is that were it not for the fallout from Dieselgate, I have no doubt at all Porsche would still be selling not only diesel Macans, but Cayennes and Panameras too. Of course they would: if your car is large and heavy, diesel offers a suite of advantages over petrol many would regard as insuperable.

Most obviously they are more efficient, meaning they use less fuel – approximately 20% less or so, it is said, but my experience of big diesel burners is that their advantage over equivalent petrol cars can be greater still. In the case of these two and according to the latest WLTP measurements, the Alfa will return more than 40mpg, the Porsche less than 30mpg. 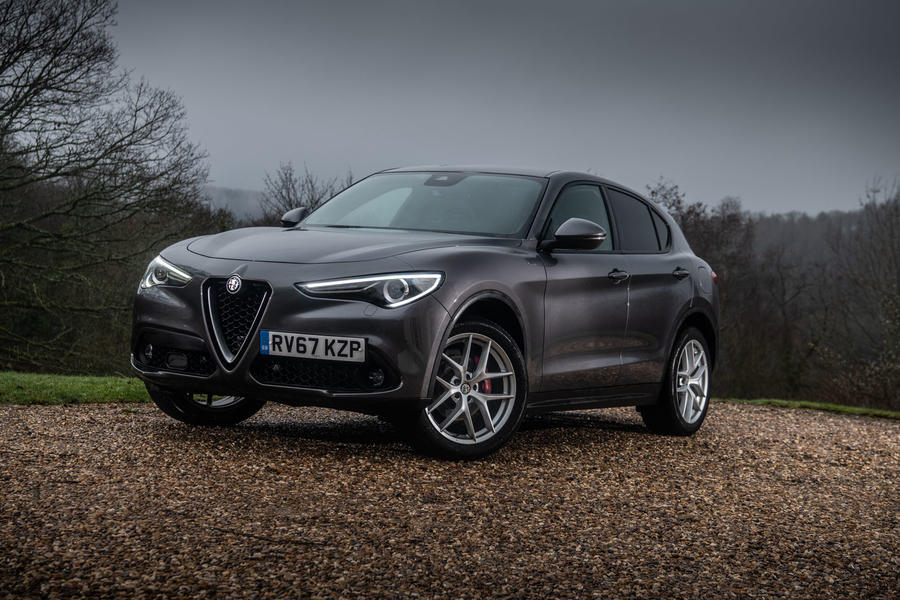 And whatever you save in fuel, you also save in CO2. If you look at tailpipe CO2 emissions, you can see that they fall year after year until the moment people got spooked by Dieselgate. And they’ve been rising ever since. Coincidence? I think not. But there’s far more to it than that: I’d have the diesel Stelvio’s torque over the petrol Macan’s power because with heavy cars – and the Macan is properly heavy – torque is more useful. Peak power can only be developed once in the entire rev range, peak torque can be maintained from little more than idle to little less than peak power. And as it is torque that you feel when you accelerate, it would be hard to overstate its importance.

Now consider that not only is the Stelvio more torquey than the Macan, it’s more than 200kg lighter too, so its crucial torque-to-weight ratio (probably the most important real-world determinant of performance potential despite the fact that hardly anyone uses it) is 209lb ft per tonne. The Macan? Just 146lb ft per tonne, a difference of more than 30%. And finally there’s range: the Stelvio has the potential to do more than 470 miles between fills even with its frankly pathetic 52-litre fuel tank. The Macan will take on board 65 litres of unleaded, but it will be a brave person who tries to stretch even that much fuel over 400 miles. Had the Stelvio the same-sized tank, it would get close to 600 miles. 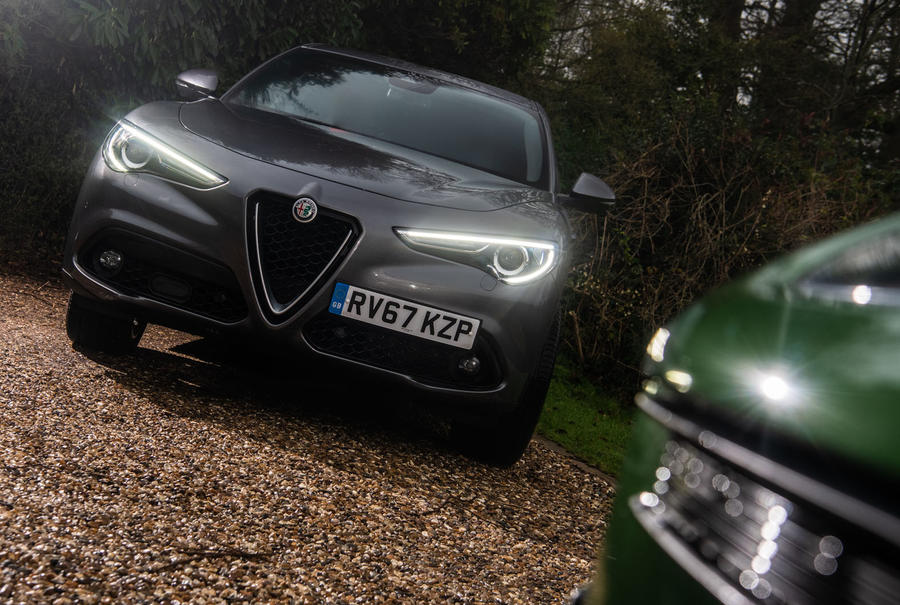 So it’s clear then? Porsche’s decision to bin diesel is akin to it taking a 12-bore shotgun and discharging both barrels into its feet. Or is there perhaps more going on here?

Point one is that regardless of its considerable theoretical advantage, the Stelvio holds nothing like the additional performance over the Porsche you might think. The quoted acceleration figures suggest there’s little to choose between them and that’s the way it appears on the road too. So what’s going on? Two things in my view: first, I suspect far less of the Porsche’s power is getting lost in translation between flywheel and Tarmac. One eye-opening decision Porsche made when turning a previous-generation Audi Q5 into the Macan was to ditch its inexpensive, off-the-peg torque converter automatic gearbox for its own seven-speed DSG transmission. But here you can see why.

Second, despite having one less ratio, the Porsche gearbox is snappier than the Alfa’s and good at keeping the Macan’s motor percolating at the energetic speeds it needs to do its best work. 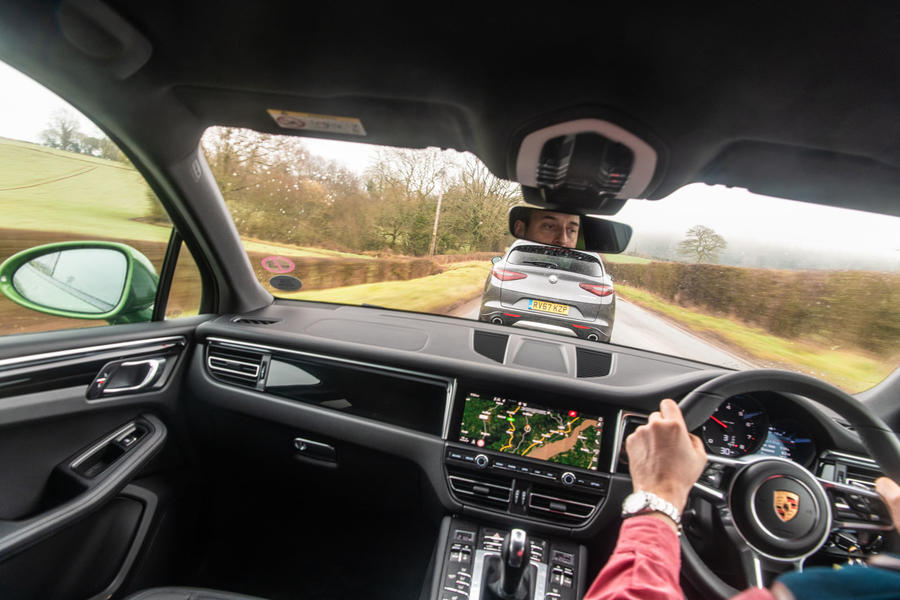 But is it desirable for a heavy SUV to require judicious use of the right foot to deliver its performance? The answer is an emphatic ‘no’. These are not supercars, they are large, family cars that should be effortless to drive and there’s no question the Alfa not only provides stronger low- and mid-range shove but requires less effort to do so. If it could do it without the accompanying diesel clatter, it could close its case with confidence.

In the event, however, the engine’s coarseness perpetuates a narrative that says the Stelvio is just not sophisticated enough in execution to cut it alongside the long-time best car in its class. I’m not going to stray too far from the petrol/diesel debate that lies at the core of this story, but that rattle from under the bonnet sits alongside the rubbish materials in the cabin, the clunky navigation and at times irritating ergonomics as different colours in the same picture. It is as well for Alfa that the Stelvio looks so good and handles so well, for as a result it remains a car with genuine appeal for those happy to overlook such shortcomings.

What we’re actually seeing here is the Macan beating the Stelvio despite and not because it is powered by petrol. The key difference between them is that the Porsche makes the most of petrol’s strength by having such a smooth engine and so responsive a gearbox, while the Alfa does not do enough to mitigate the drawbacks of diesel, principally its noise and harshness. 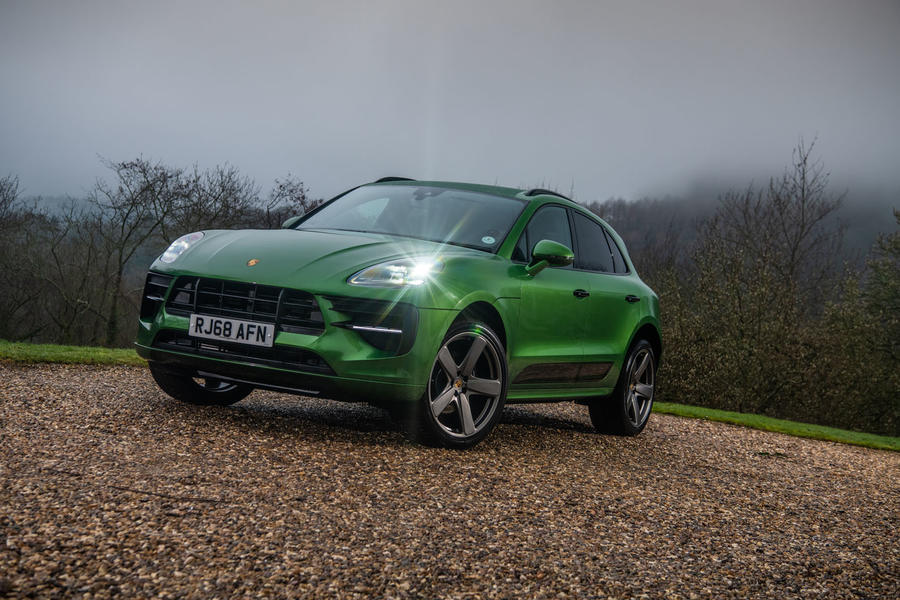 Which rather begs another question: were the old Macan Diesel S still on sale, how would it fare against this petrol version? Well, it would cost more but, in my opinion, it would be worth it. It would be quicker, more responsive, still use less fuel, go further on a tank and, because it had six rather than four cylinders, would suffer few if any of the refinement issues that dog the Stelvio.

There are wider inferences to draw here: although not everyone’s four-cylinder petrol engine is as smooth as the Macan’s, nor everyone’s four-cylinder diesel as challenging as the Stelvio’s, the truth is that diesel is inherently better suited to multi-cylinder applications. The smaller, lighter and cheaper a car is, the harder it is to make a case for diesel. At the other end of the spectrum, the V8 diesel is one of my favourite engine configurations, never bettered than when under the bonnet of the second-generation Porsche Panamera. What a shame it has been deleted, for it makes the V8 diesel also one of the most endangered configurations.

In conclusion, I should point out that while the Macan would win this test if it were a straightforward comparison, I would maintain that the right diesel engine is inherently better suited to such a car than even the most fluently engineered petrol-powered equivalent. It is only because it does so well with such limited resources that the Porsche is able to overwhelm the Alfa here. That said, if running costs, range and low-down throttle response matter more than refinement, there is still a case for the Stelvio. 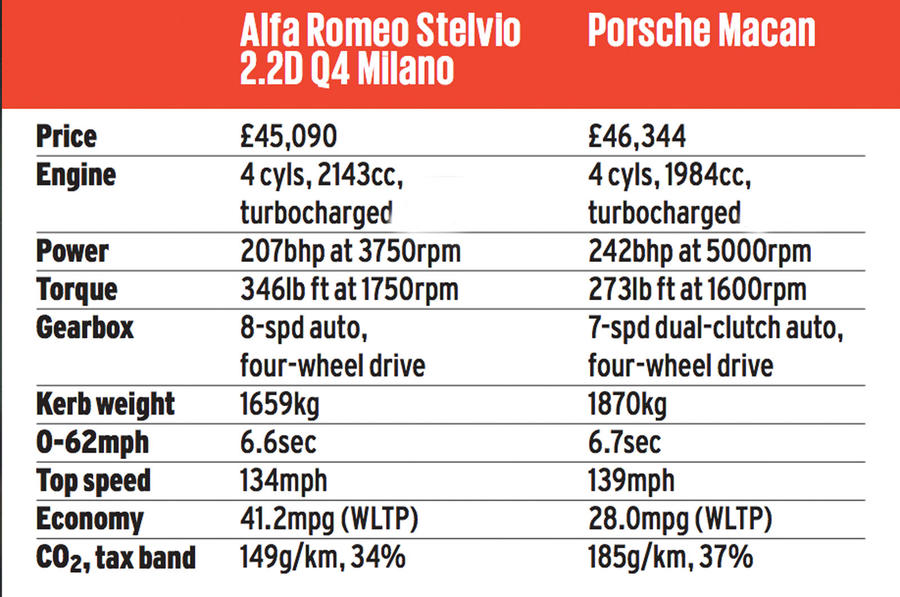 So far as middling to large SUVs costing £40,000 and up are concerned, were all other things equal diesel would be the preferable power source and by a significant margin. But they’re not. So while diesel beats petrol, Porsche still beats Alfa.

Opinion: Why we should buy new, cleaner-than-ever diesels​

Insight: Is it time to give up on the diesel engine?​

Porsche confirms it will no longer offer diesel engines​

If you're actually bothered

If you're actually bothered about fuel economy, neither of these heavy overgrown miniature tanks are suitable. I'd strongly prefer a nice estate car which is lower, lighter, handles better, is more aerodynamic and thus gets better fuel economy than these crossovers.

Cars of this size and weight needs a v6 diesel possibly a hybrid/diesel v6 its the torque thats needed to pull these things around small 4 pot engines are under to much pressure to carry this type of weight a v6 diesel never needs to be driven hard as it more than capable of pulling the weight when an engine is less stressed it more efficent.
donoVAN 16 March 2019

These cars are so evenly

These cars are so evenly matched in performance but in interior quality the porsche wins by far.