From £56,6059
Sporty version of new A6 offers extra pull without pushing the model too far from practical sensibilities
Open gallery
Close

Have you heard? Diesels are as relevant as Theresa May. No one buys them anymore because they’re NOx-ious... but Audi doesn’t care. It loves its turbo oil-burners and is stoically sticking by them. Strong and stable, with no hint of compromise. We’ve heard that somewhere before.

So if you want this new S6 Avant, be prepared to park next to the black pump because diesel is what it’s all about. The 3.0-litre V6 with 48V mild hybridisation is familiar from the A6 50 TDI saloon, but with greater punch befitting the ’S’ designation.

Outwardly, there’s little to tell it apart from its A-list sibling, apart from some nice chrome work around the grille, smart metallic wing mirrors, the subtle ’S’ embedded in the nose and ‘Audi Sport’ branding on the bounteous 21in cast aluminium wheels. But in the primary colour of our test car, the S6 doesn’t need extra flourishes. Audi has always understood how to draw a nice line in brutish elegance when it comes to its wagons, and this Avant follows that tradition. Standing still, it looks potent. And big – the profile view appears to fill the horizon.

Inside, again there’s little to differentiate from the A6 – not that there’s much room for improvement on one of the best interiors you’ll find in this price range. Tactile, sharp-looking surfaces abound, while the sports seats in black Valcona leather offer all the support and comfort you could wish for. Hold the front page: an Audi cabin is still a spa-like place to spend your time.

On practicalities, rear leg room is adult-friendly (even for tall ones), while luggage capacity in the tail, with the second row in use, is 550 litres – so not huge by estate standards. It’ll be enough for some, but it’s hard to imagine this as a car for dog owners, and it somehow feels too plush for runs to the local tip.

So why choose the S6 over the A6? Go searching for that extra spice to justify its £60,750 price (before options) and you will find it – but only once you get moving, which, when it comes down to it, is surely what counts the most. Just as you’d hope, it’s in the driving where the S6 stands out from its near-identical sibling. 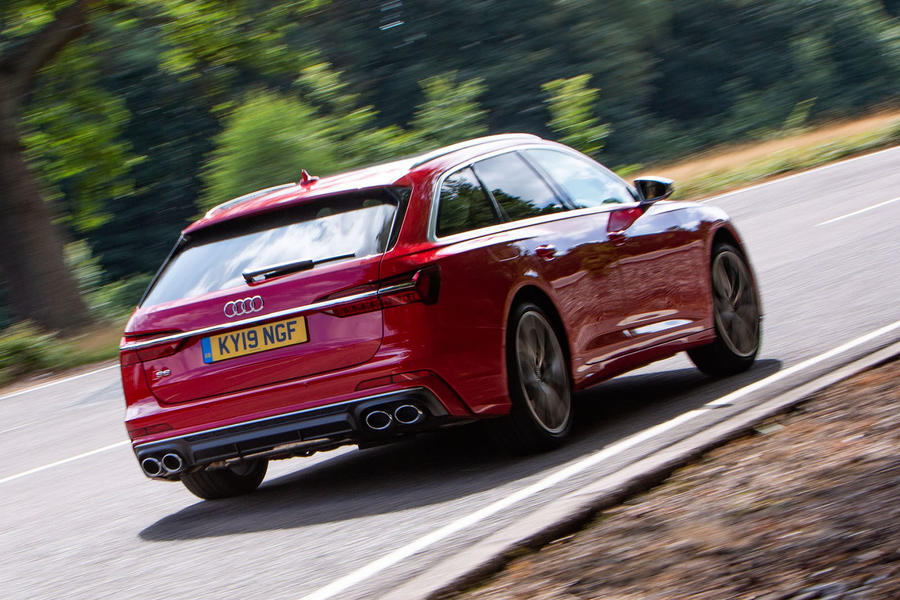 The S6 is fast, for starters. The oomph of 344bhp and a whopping 516lb ft of torque is more than adequate once you squeeze north of 2000rpm. From a standstill, that familiar and disconcerting turbo lag is still there – and forces you to think twice about going for gaps from junctions (some might argue no bad thing, but it’s disconcerting, especially in a premium offering in this price range). But once moving, the shove is pronounced – and then some.

On motorway commutes, the ride experience hits all the usual adjectives for an Audi: quiet, refined, perhaps a little aloof. And with a range and economy on a tank that makes 600 miles within reach, there’s little reason to leave your cocoon of comfort for a wet and windy forecourt too often. Epic journeys should be devoured.

But it’s on A-roads, and even pockmarked British B-roads, where the S6 offers the most and moves the game on from the A6. The adaptive air suspension probably plays its part – an option included on our test car, but apparently unavailable on UK models (yes, we know...). But the combination of quattro four-wheel drive grip and feel, well-weighted electromechanical steering and that well of bottomless torque makes a single-lane trip an adventure to be relished.

Audis are supposed to be a little vague on road placement, aren’t they? Well, not any more, on this evidence. And you’ll soon forget you’re pulling a whale-tail: its accuracy in corners and ability to get through them without a hint of fuss belies its girth and heft.

Driver modes are subtle – at least they are until you click through the touchscreen to Dynamic. Then something interesting happens. The V6 begins to burble.

At first, we checked our mirrors and blindspots for an old four-stroke motorcycle – but no, the thrum was apparently from within. Such is the air of detachment in Audi cabins, the soundtrack is detached from the physical experience that’s being communicated through your hands and backside. Strange, but far from unpleasant – and even slightly comical, because the audio doesn’t really match anything else about this sophisticated engineering wonder. It’s a tad try-hard, perhaps.

Flap the paddles to pretend you’re in control, by all means, but the eight-speed tiptronic transmission soon steps back in – subtly, without you noticing most of the time. As much as the use of the paddles is engaging, with this amount of torque it doesn’t really matter which gear you are in and the automated selection is mostly seamless anyway. In essence, the transmission gives you what you need (apart from that step-off reticence).

Options included on our test car included various packs: Tour (£1950), City (£1375) and Parking assistance (£700), all of which are expensive but probably justifiable when you’re dealing in this rarefied air – and we’d recommend the Bang & Olufsen sound system every time (£800). 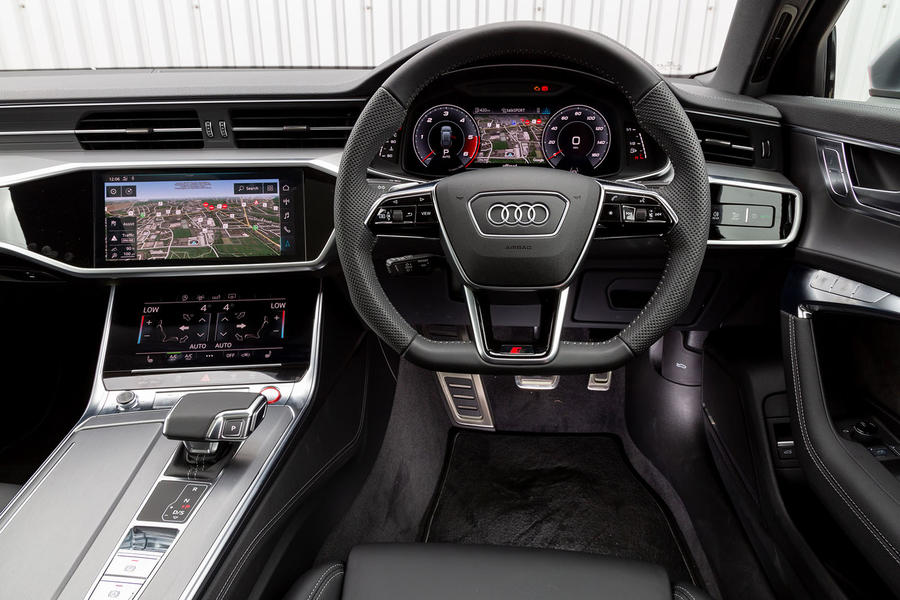 Modern Audis tend to be Marmite for car lovers. Spend a decent amount of time in one of its executive saloons or wagons, and generally they are hard to fault In terms of technical competence and comfort. The problem, if you like driving, is that old icy lack of engagement. It’s so common it’s become something of a cliché.

But the S6 goes a fair way towards addressing that stereotype, without losing its premium-class poise and stepping into more obviously brutal RS territory. The car treads a fine line well.

If you travel regularly over significant distances, but want a surplus of bang for your 60,000 bucks, the S6 could be your answer. 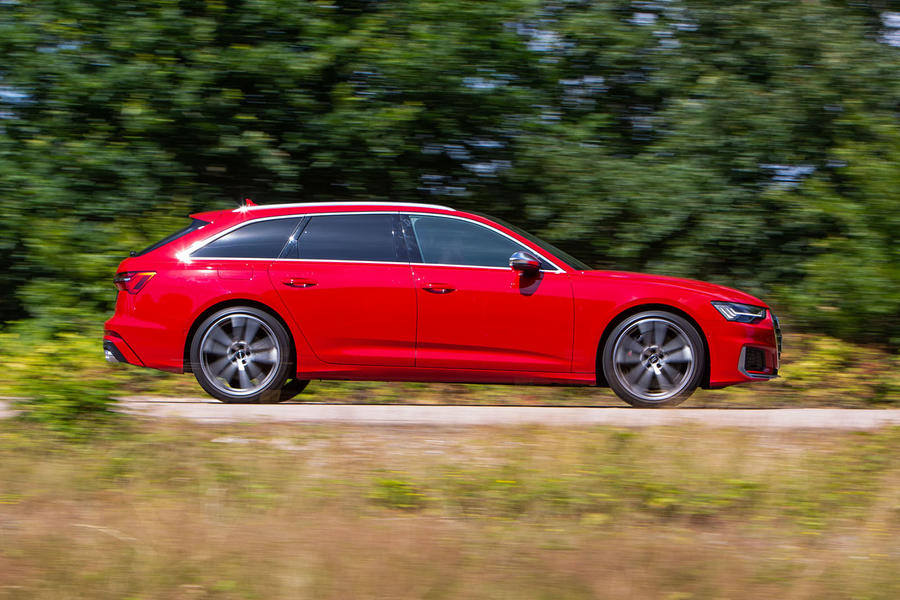 I have gained a lot of information by reading about the car here. I hope you will continue to help me and other human beings like me well. Thank you

Considering it weighs just under 1900kg, those are very impressive but largely irrelevant performance figures considering the police state that is Australia, but good dinner conversation if required. If you need more fodder, just mention that it’s fundamentally ( with some hardware changes) the same engine as the significantly more expensive Audi RS6 but in a different state of tune. Hindilinks4u

As is the case with Audi’s mid-life updates, exterior changes are basically unnoticeable. But if you squint, you’ll find the front and rear have been given a very slight tweak with sharper headlights ( now with Matrix LED) and dynamic turn signals ( growing from the inside out, rather then blinking) for the taillight LEDs. But don’t expect to be able to tell the MY15 apart from its predecessor with a sheer glance. Khatrimazafull

Changes to the interior, though, are a little more obvious. The main one being the addition of a 7-inch driver information screen that fits seamlessly between the speedometer and tachometer. Though it’s not as futuristic as the full-digital unit found in the recently launched Audi TT, it’s a worthwhile addition if your navigation system gets a regular workout.

nice but its 60k so it should be

Without the unavilable in the UK adaptive air suspension its not a 4.5 stars. I guess it lines up with the likes of the E43 petrol price wise but I would expect to see this in the low 40s very soon. Overall it is my type of car but I think I would want something with more emotion than a diesel for that money.