BACK TO ALL NEWS
Currently reading: Ford GT vs Ford Fiesta ST: in search of the blue bloodline
UP NEXT
Future BMW M3 to be ‘groundbreaking’ EV with traditional feel

Ford GT vs Ford Fiesta ST: in search of the blue bloodline

The sheer elasticity of Ford Performance is a remarkable thing.

Within the space of a year, the Blue Oval’s fast car division knocked out one of the most intoxicating supercars of its generation, then quickly followed it up with the best affordable performance car money can buy.

In the same way that a coastline seems to get longer the more accurately you measure it, the gulf that divides the GT and the Fiesta ST becomes more and more preposterous the closer you look. Consider this: while the ST counts Toyotas, Vauxhalls, Volkswagens and Suzukis among its rivals, the GT costs about the same as a mid-range McLaren, plus a mid-range Ferrari. And if you were to take every penny you had set aside for a GT of your own and spend it instead on Fiesta STs, the 22 hatchbacks that you’d become the proud owner of would weigh the same as four fully grown African elephants.

You get the picture. The Ford GT is a lot more expensive than the Fiesta ST, although at £420,000 it is also a lot more expensive than most other supercars. And it isn’t even as though Ford Performance is blagging its way through building two such disparate cars. No, it’s pulling it off in some style, neither one feeling like a leap too far or a token effort. Somehow, the GT and the ST both exist in the Ford Performance heartland.

It was only a matter of weeks ago that we crowned the Fiesta ST the finest sub-£30,000 performance car of 2018. A fortnight before that, we awarded it a four-and-a-half-star road test rating, which rather makes the four stars we deemed the GT worthy of 12 months previously seem a touch humiliating. Is the GT really shown up by the ST? We’ll come to that. With the two cars parked alongside each other, the stark reality is that the GT is so otherworldly looking, so malevolent, that in its company the ST almost looks pathetic, like a parasitic remora fish clinging to the flank of a great white shark. Actually, it looks as though somebody has turned up to our photoshoot uninvited and parked right in the way. Of course, the other stark reality is that the supercar was designed and developed in North America while the hot hatch hails from Ford’s R&D centre at Lommel in Belgium, so it is very possible that the personnel overlap between the two projects was precisely none at all. But they are still siblings, or first cousins at the very least, and when you drive the two back-to-back, you do pick up on a number of similarities.

Mostly, though, you notice the differences. In the Fiesta you sit upright and have good visibility all around you, but in the GT you are in repose and can only really see directly ahead of you through a narrow slit of windscreen. And while the ST feels dinky out on the road, the GT feels simply enormous.

Everything about the GT screams motorsport, which is no surprise at all given it was designed to monster the opposition at Le Mans, and only then made vaguely civilised for road use. And it is motorsport, of course, that justifies this car’s existence at all, because if Ford hadn’t won the world’s greatest endurance race four times in a row half a century ago, the Blue Oval simply wouldn’t have the brand cachet to pull off such a fantastically expensive supercar. If in some parallel universe Ford had gone ahead and built the GT without having won at La Sarthe all those years ago, nobody with even a flicker of sense would have spent the better part of half a million nicker on the damn thing.

So the GT isn’t just derived from motorsport, it owes its entire existence to racing. That’s why it seems so appropriate that while Ferrari and McLaren busy themselves with making their supercars more and more usable every day, Ford has charged off in the opposite direction and built something so raw and uncompromising, you’d have to be a masochist to use it daily. 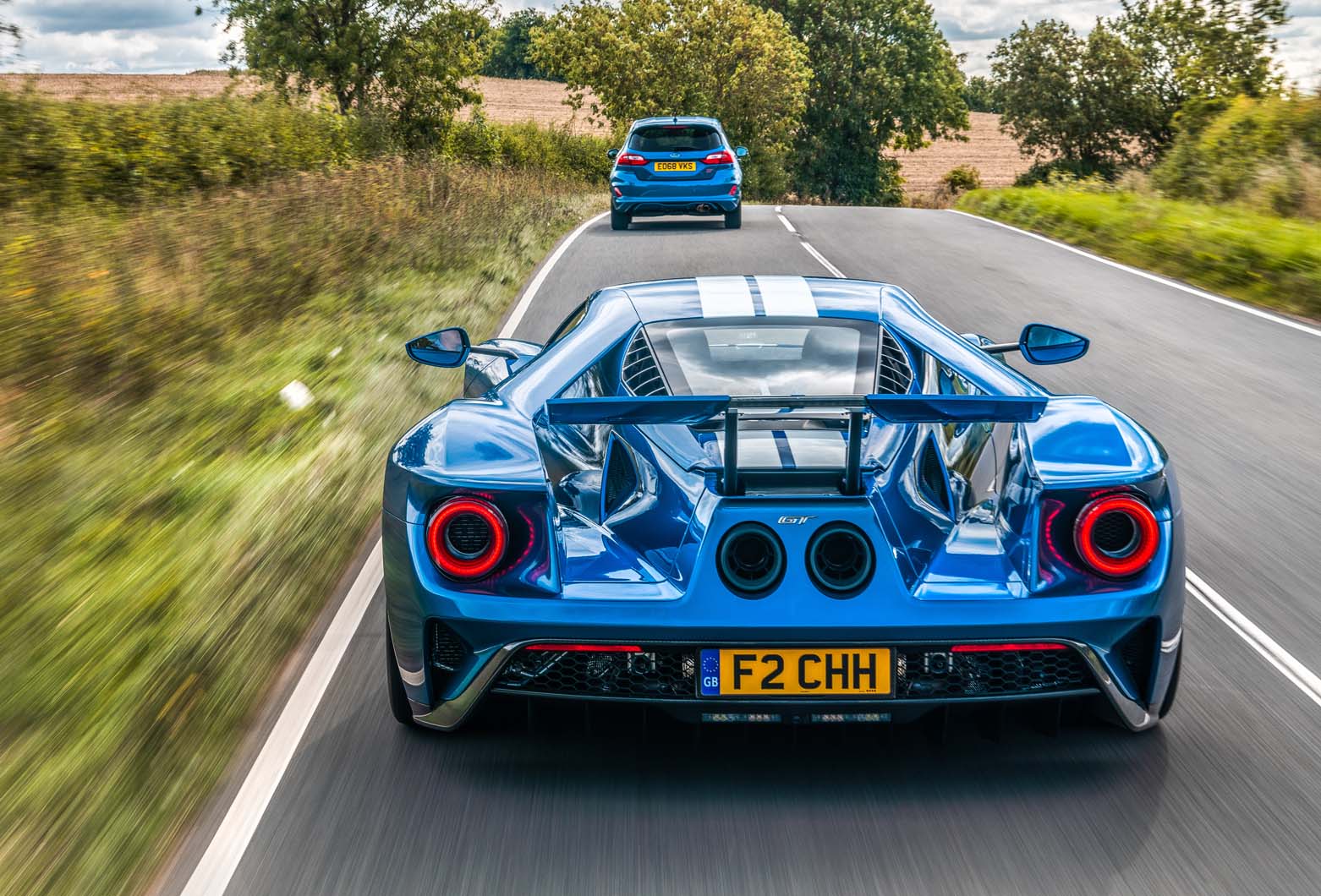 The way I see it, a supercar should be used occasionally and be so unlike your daily transport that you never forget how special that supercar is. When the GT slaps heavily over cats eyes, therefore, and when stones ping noisily into the wheel arches and when the boost from the V6 engine’s pair of turbochargers builds extravagantly and then is dumped with a loud hiss, I can’t help but add another layer to that hectic soundscape by whooping in delight. This stripped-back, immersive kind of driving experience has become far too rare.

The big rear spoiler drops so quickly from view as you slow down to urban speeds, and with such a loud thwack, that you swear every time it has just fallen off. You sit so close to the centre of the car’s cabin that, with a passenger alongside you, your shoulders are in constant contact. You also have to remind yourself that over your other shoulder there is at least another foot of bodywork. The seat itself is fixed so you tug the pedal box towards you or kick it away with your feet, adjusting the steering column for reach to get your driving position just so. The floating upper section of the dashboard brilliantly mimics the exterior aero tunnels that are this car’s signature design feature, adding to the very real impression that air doesn’t flow over the top of this car or underneath it, but that it passes directly through it.

The engine is industrial-sounding, all tuneless turbocharged blare, uncultured thrashing and assorted whistles and whooshes. It isn’t in the least bit musical, but you will not happen upon a more purposeful or to-the-point soundtrack away from a racing paddock. With 647bhp on tap and less than 1500kg to punt along, the GT does feel furiously quick, but it doesn’t deliver quite the panic-inducing, unrelenting acceleration of the admittedly more powerful McLaren 720S.

The GT’s steering is detailed and incredibly direct, and there is so much body control even on a cresting, yumping road that it seems daft to mention it at all. Body control is to the Ford GT driver what sand is to the Bedouin. On top of that, the car has enormous grip and freakish agility, but while the springs are very firm and there’s only a modest amount of wheel travel, the quality of the damping in that very short stroke means the ride is actually mature and sophisticated. 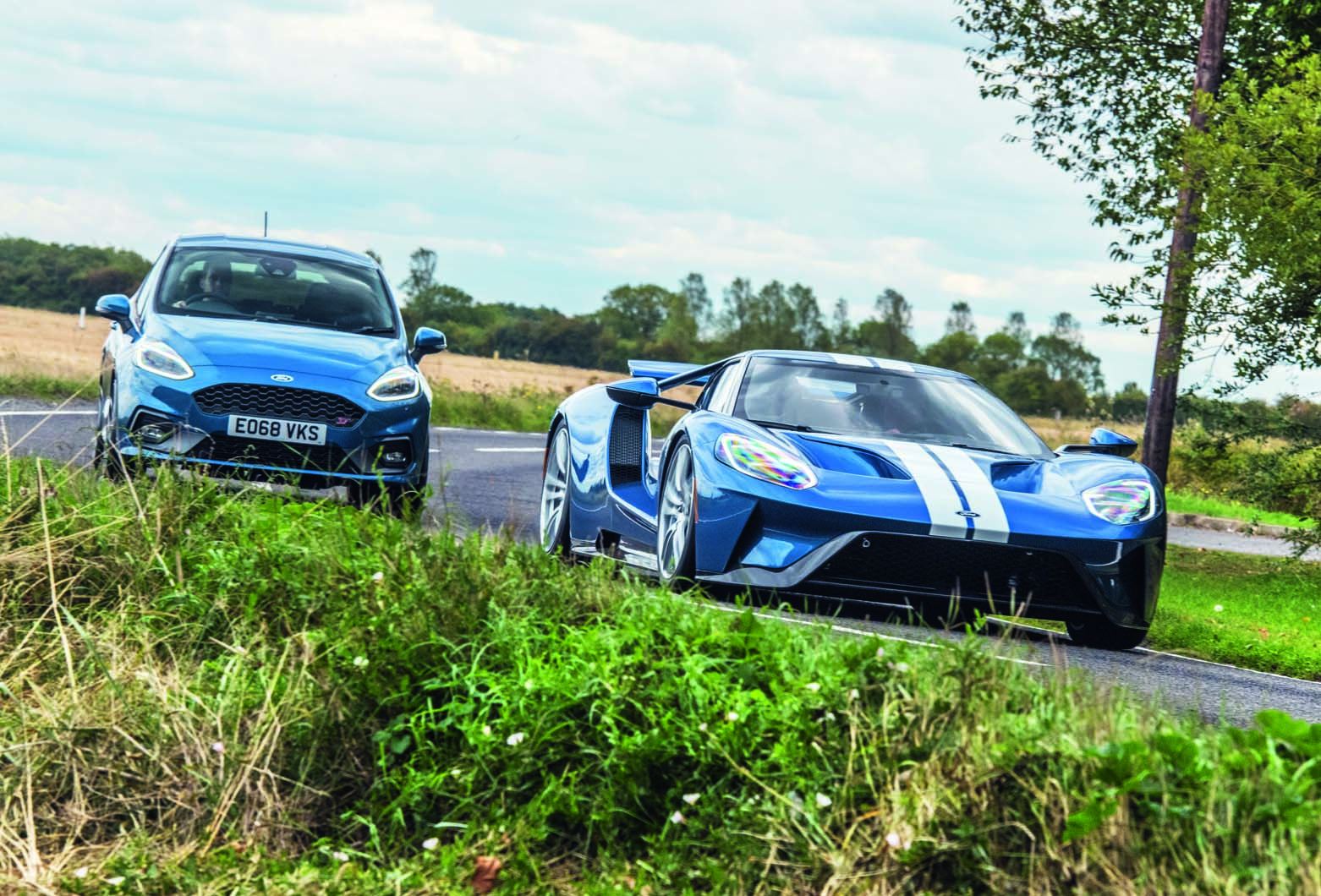 In fact, it is the Fiesta ST that feels busier when flung across our chosen stretch of Cambridgeshire B-road, boinging up and down in its trademark way where the GT is a little more settled. The ST’s 1.5-litre, three-cylinder turbo motor is more or less half the engine the GT’s 3.5-litre twin-turbo V6 is, but rated at 197bhp it delivers not even a third of the power. Aside from their industrial soundtracks, the two engines have very little in common – the ST’s three-pot feeling as though it’s done its best work by 5500rpm, whereas the GT’s V6 wants to keep on going.

Both cars have frantically responsive steering, to the point where you have to calm your steering inputs to avoid making either car feel nervous or flighty. If there really is any shared DNA between them, however, it’s this: while both cars are enjoyable to drive at medium speeds, they really come together and start working as a cohesive whole rather than a series of interconnected components when you start pressing on. They both want to be flogged near enough to death, and in both cases the engineers have compromised some level of everyday agreeableness – a little in the case of the ST, a lot for the GT–to make it that way.

What about those star ratings: is the ST really half a star better than the GT? Only in the vaguest, most meaningless sense, because while the ST is by some margin the best car in its class, the GT is much more expensive than a number of its rivals, it’s not necessarily more exciting to drive and it is actually less adept at the day-to-day stuff. So it’s all relative.

The elasticity of Ford Performance is a unique thing and something to be celebrated. That is true for the time being, at least, because when Mercedes-AMG’s Project One hypercar finally comes on line, the title of stretchiest performance sub-division will transfer from Dearborn, Michigan, to Affalterbach, Baden-Württemberg. After all, alongside building £2 million hypercars with Formula 1 powerunits, AMG will also sell the recently announced A35 hatchback at something like £35,000. 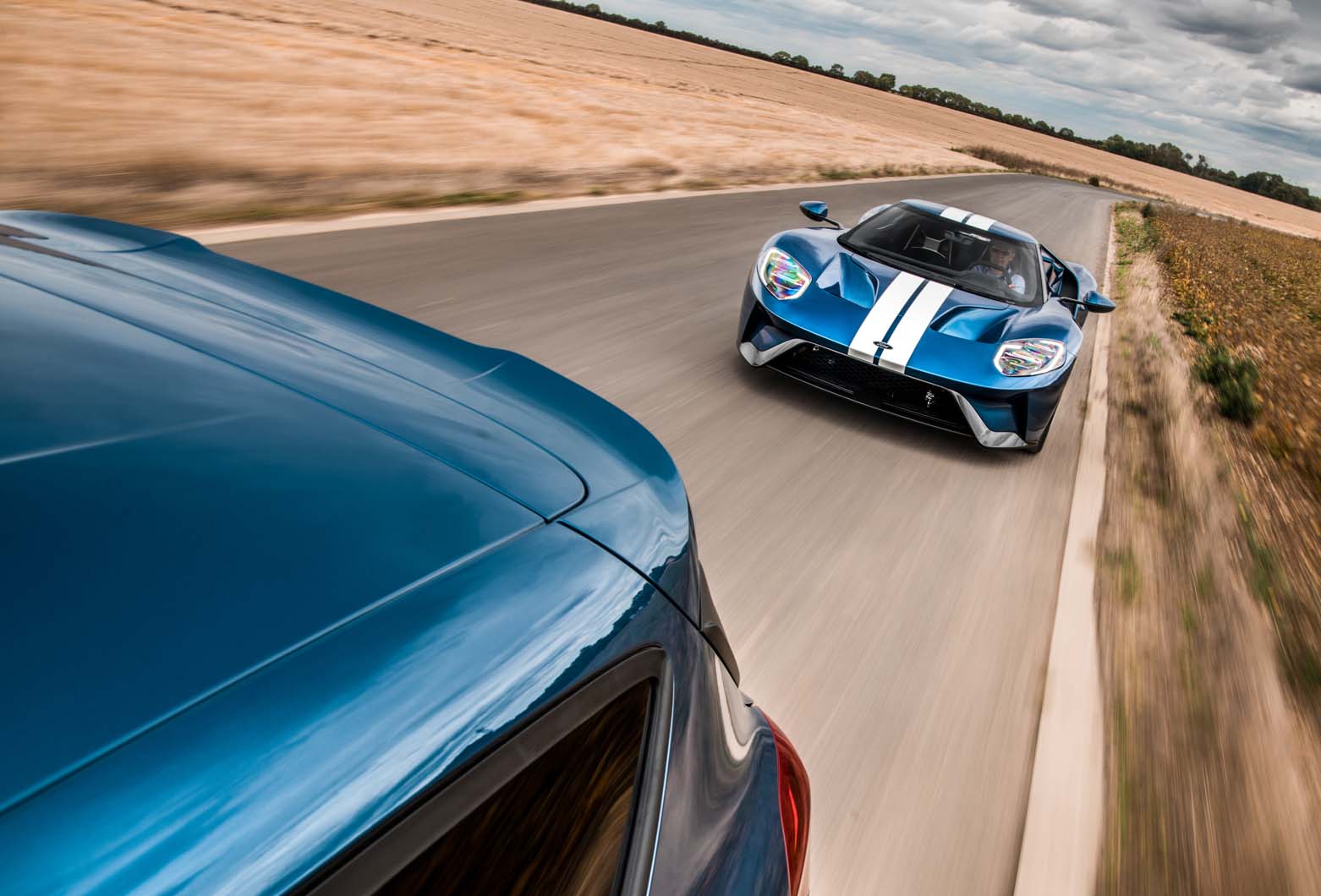 As the Ford GT drives away at the end of our photoshoot, I realise that in all likelihood I will never drive one again, let alone own one myself. At least in the Fiesta ST, there is a Ford Performance product that is also enormously good fun to drive, and rather more affordable too.

ESCORT RS COSWORTH, 1992-1996, Pay £40,000: The RS Cosworth was so popular among car thieves that in certain parts of the country it became uninsurable. With four-wheel drive and a 224bhp four-pot, it had a level of performance we’d rarely seen in a hatchback before. 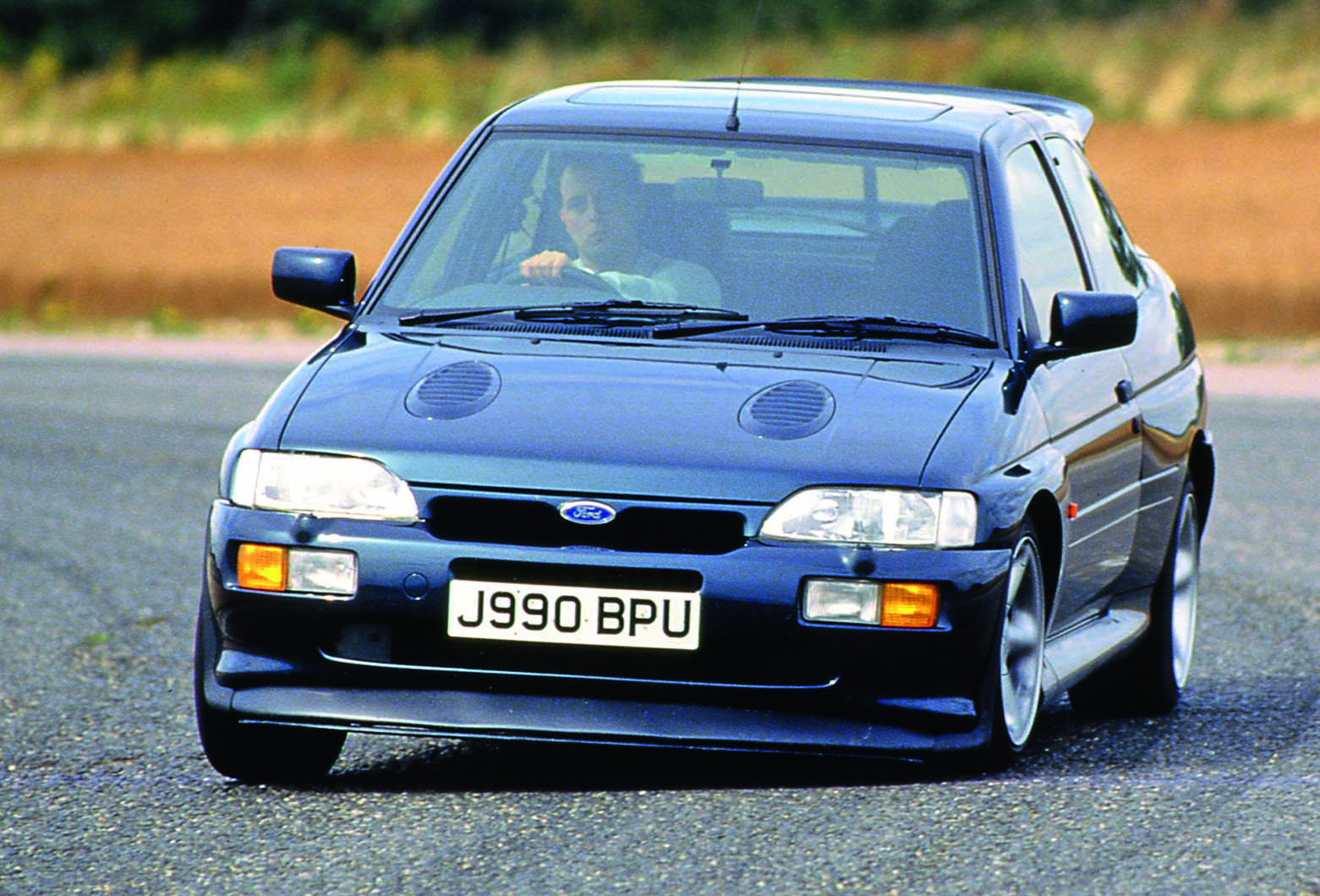 MK1 FOCUS RS, 2002-2003, Pay £12,000: Arguably the original super-hatch, the first Focus RS was laden with go-faster hardware but some reckoned its pronounced torque steer made it a liability. Most agreed it was a real looker, though. 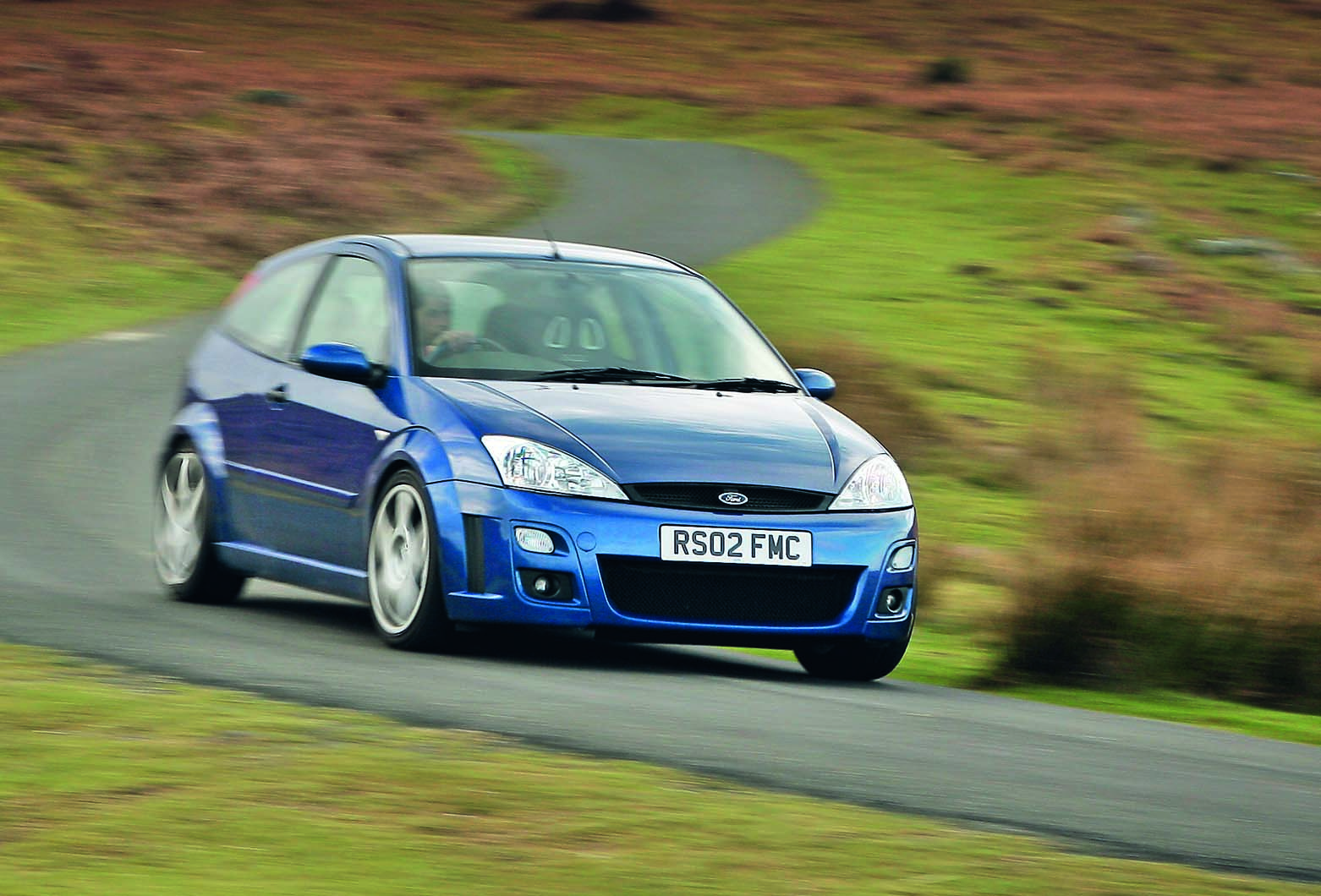 GT, 2004-2006, Pay £250,000: What the previous Ford GT lacked in outright performance compared with the newer model, it made up for through sheer force of character. With a walloping V8 and a manual gearbox, it was rewarding to drive too. 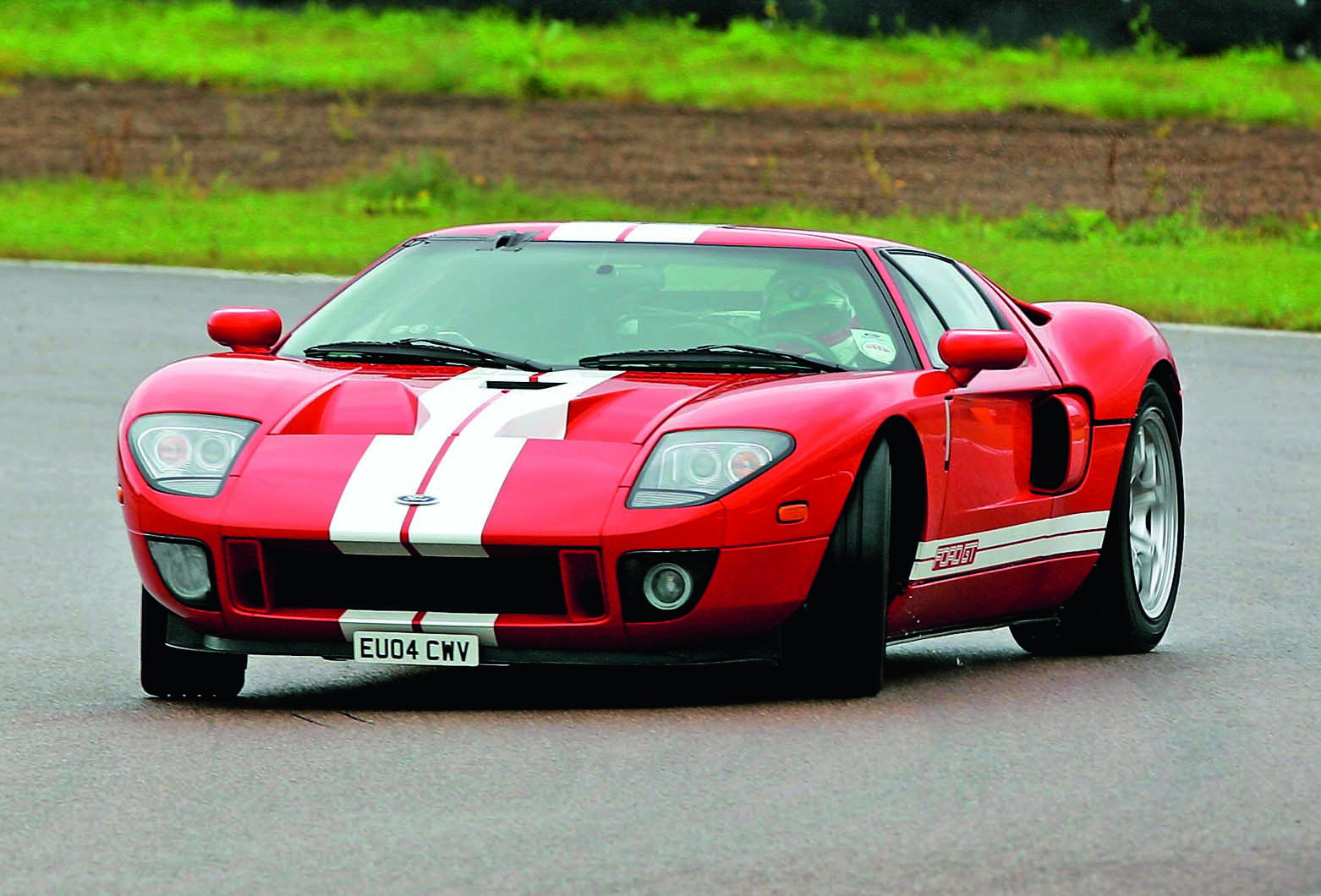 MK2 FOCUS ST, 2005-2008, Pay £4000: It may not have been universally adored but, with a characterful 225bhp five-cylinder turbo engine, the second-gen Focus ST did at least have a USP. The good news is that since going off sale, it has dropped into bargain basement territory. MK6 FIESTA ST, 2013-2017, Pay £9000: Like its successor, the Mk6-based Fiesta ST was one of the most cohesive performance cars you could buy at any price point. The engineering was reminiscent of a purpose-built sports car, but what mattered more was how much fun it was. must have instilled mucho envy with car designers. It is that special, significant and iconic. It makes other exotic cars look like overdesigned look-at-me posers. With the possible exeption og Koenigsegg.

I Loved this Ford GT

I'm in love with the Ford GT, in blue it looks even more beautiful! como fazer dindin gourmet para vender

The problem is Renault, Honda etc continue to progress at a top level in Motorsport. FORD on the other hand, other than dipping in and out of rallying, only have Heritage, from decades ago!

The problem is Renault, Honda etc continue to progress at a top level in Motorsport. FORD on the other hand, other than dipping in and out of rallying, only have Heritage, from decades ago!