BACK TO ALL NEWS
Currently reading: Drive: Porsche Cayman GT4 Clubsport takes on Silverstone
UP NEXT
New 2026 Polestar 6 confirmed as 874bhp evolution of O2 concept

For serious racing and track-day fun, this amped-up 718 Cayman delivers - in spades. We drive it on Britain's most famous circuit
Open gallery
Close

To me at least, the GT4 category is where tin-top sports racing cars are at. Ten years ago it would have been GT3 but, not only are GT4s as quick today as were GT3s back then, you can also drop a million quid into GT3 racing with frightening ease and still find your best efforts come to nought when some snake-hipped, gimlet-eyed, no-prisoners professional pedaller barely out of short trousers decides that rather than lose a couple of tenths going around you, he’ll just stick you in the barrier instead.

A modern GT3 car is a formidable weapon capable of lapping Spa at the same sort of pace as Group C prototypes from the early 1980s. GT4s are still bloody rapid – I raced a McLaren 570S GT4 at Spa last year and found myself turning in to Eau Rouge at 144mph – but they cost a tiny fraction of GT3 money to buy and, crucially, to run. They’re also nicer cars to drive because they’re not so heavily dependent on their aero and the way the car must be driven to exploit it, and while the best drivers will always go fastest, it is easier to home in on the full potential of a GT4 car than a GT3, which gives us amateurs some kind of chance.

Take this Porsche 718 Cayman GT4 Clubsport. It will lap Silverstone at a rate that will make any road car look inept, yet if you have even a modicum of talent and experience, you’ll feel perfectly happy to push on as soon as its Michelin slicks are warm. Do not let that ‘Clubsport’ moniker fool you into thinking that this is just a mildly tweaked road car like, for instance, the famous old Porsche 968 Clubsport. This is a highly evolved racing car, dramatically different in all important regards from a street GT4 Cayman. It has, for instance, the older 3.8-litre flat six under its engine cover, yet it produces fractionally more power: 420bhp versus 414bhp. Unlike the road car, it has a PDK gearbox, but with its top gear removed, to leave just six. 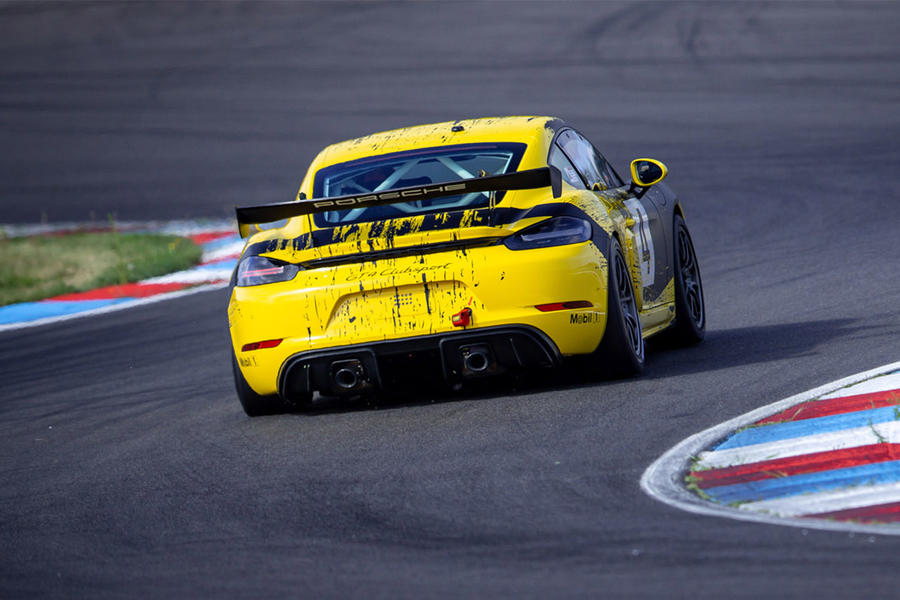 The entire interior has been ripped out, leaving just the basic shape of the dashboard, some switches and the column stalks to remind you which make of car you’re in. A brilliantly clear Cosworth data-logging system replaces the conventional dials.

So the car should be a lot lighter than a standard Cayman GT4. But it’s not. Because once you’ve factored back in the air jack system it carries, the welded-in roll-cage, communications systems, fire extinguishing kit, removable roof section (mandated by rule makers) and standard 90-litre race tank, the car weighs 1320kg, which is about the dry weight of a GT4 road car.

In a racing context, it is as easy to drive as the street Cayman GT4 is in a road context. You might find the unfamiliarity of the cockpit, the sight of those slicks and the knowledge you’re in a racing car a trifle intimidating, but you need to remember these are cars designed to be driven by people without much racing experience and come with all the electronic aids found in the road car. For similar money, you can buy a Porsche 911 Cup car, which is a very different proposition indeed: with no ABS, no traction or stability control, a sprint-spec tyre that needs constant management and demanding limit handling, it requires an altogether different, more senior approach. 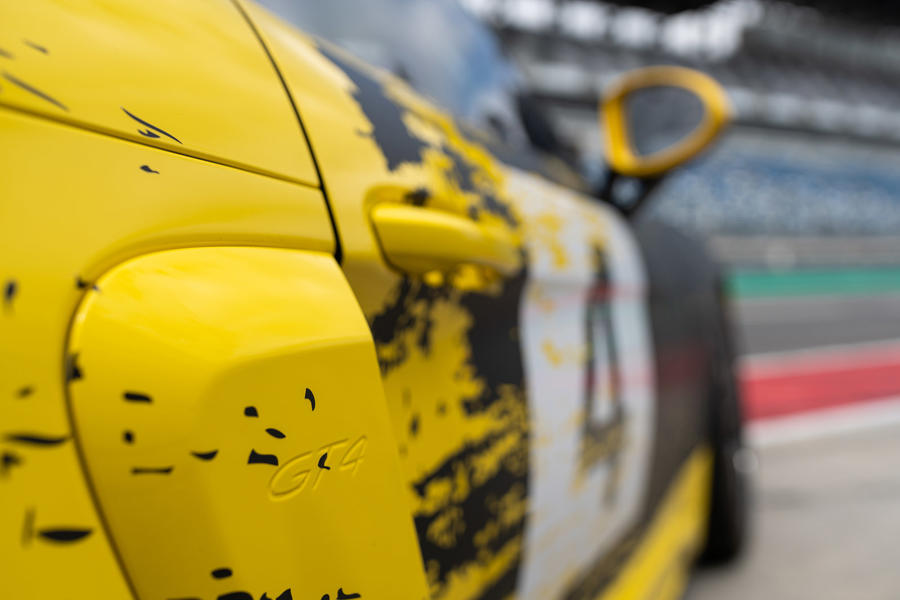 But in the Cayman, the only real challenge is adjusting your horizons, because while its basic characteristics are quite like those of the road car, they appear at a level that has nothing whatever to do with street machinery.

It’s an easy car in which to get comfortable. There’s plenty of leg and head room, the steering column adjusts in the normal way and the car fires up and sounds as you’d expect. You trundle out onto the circuit, where you’re provided with your first big test. If the tyres are cold, they don’t work at all, so you need to drive hard enough to heat them up without binning it in the process. Here, the electronic systems help, as does left-foot braking on the straight with your right foot still hard on the accelerator, using disc heat to warm the rubber.

Then you can let it go. At once, the car’s straight-line performance becomes its least interesting aspect. First, you must get used to how the car brakes: the GT4 Clubsport doesn’t have huge downforce by race car standards so you don’t need to worry too much about adjusting brake pressure as the downforce seeps away but you still fly past the point you’d expect to brake, count to three and then hit the pedal, perhaps twice as hard as you’d consider in any road car. The ABS doesn’t so much as cheep.

The next thing to learn are the cornering speeds, which at first seem unfeasible but end up being merely breathtaking. But you won’t go fast in the car until you’ve blended these two disciplines and learned how to brake and corner at the same time. Any idiot can learn when to get back on the gas. The key to a lap time is all about the entry-to-apex phase, easing in almost fully on the brakes, then releasing pressure to allow cornering forces to build, always keeping the tyres as close to the limit of their longitudinal and lateral capabilities as possible. And on a quick circuit like Silverstone, once you’ve established a rhythm and the car starts to fly, you never want to get out. 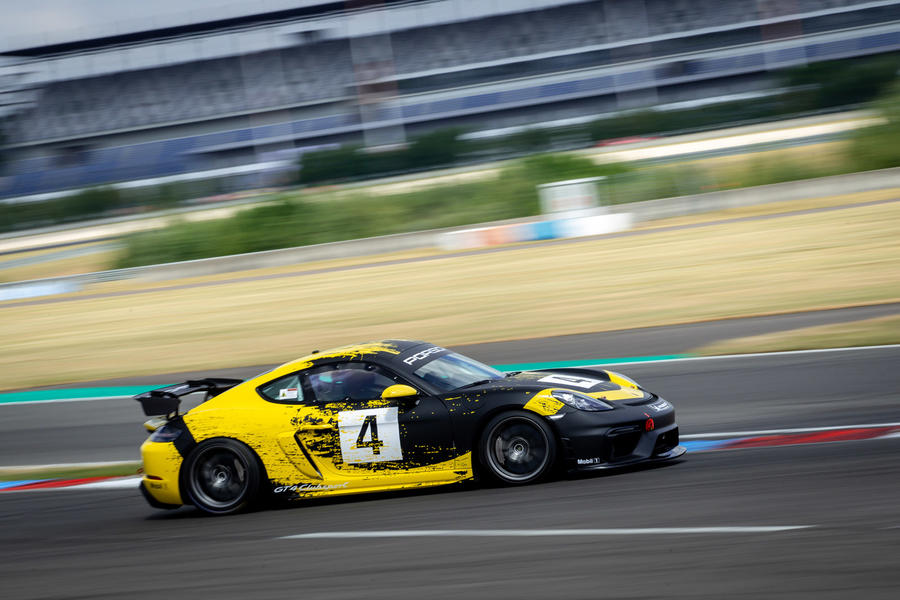 Faults? I was losing time collecting off-throttle oversteer but only on one corner of the circuit; the car feels like it could cope with another 100bhp with its eyes shut (but the race regs would never allow it); and £131,100 without VAT is a lot of money when you consider the road car costs a little over £75,000, VAT included. It is effectively twice the price.

Then again, if you want to go GT4 racing, it’s a mightily tempting proposition. The Porsche name will make it far easier to attract sponsorship than some other brands and the car should be mechanically near enough bombproof, so if you don’t stick it in the wall, it should be relatively affordable to run. Most important, it’s a very simple car in which to get up to competitive pace, unlike, say, the 570S GT4, which took a lot of learning. And if you really want to see how good you are, Porsche has a UK-based one-model series just for Cayman GT4s called the Porsche Sprint Challenge GB, where there is no hiding.

Or you could just have one as a track-day car and get your kicks from using a humble Porsche 718 Cayman to blow bona fide hypercars into the weeds. Viewed like that, it almost looks cheap.

A natural way to reduce carbon

One of the first things manufacturers tend to do when turning their road cars into racers is to replace various body parts that were cast in steel or aluminium with carbonfibre. But not the Cayman GT4. Instead, Porsche took a more sustainable approach to weight reduction by making the doors and rear wing from a blend of natural fibre composites based mainly on flax. No, it’s not quite as light as carbonfibre but there’s not much in it and it’s an interesting, modern and innovative approach to an age-old problem. Sadly, it won’t be seen in the environment where such materials are more usually found, because the project to create a Cayman GT4 Clubsport rally car announced last year has sadly been canned.

Are you building a GT4 RS any time soon?
If the answer is yes, then arguably you'd be offering buyers the best car, ever!
If no, then opportunity sadly missed.