BACK TO ALL NEWS
Currently reading: Racing a McLaren 570S GT4 around Spa-Francorchamps
UP NEXT
Spending 48 hours touring in a Ferrari Roma

It is as well that I had no time to look at the speedometer of the McLaren 570S GT4 racing car as, lap after lap, I hit the compression at the bottom of Spa-Francorchamps' Eau Rouge corner.

Because if I had, I’d have discovered that I was turning into perhaps the most feared and fabled turn in all of motor racing at exactly 144mph. And then I’d have needed to park up, get out and lie down. If you’re interested, the McLaren also does 135mph at the exit of Pouhon and 140mph at the apex of Blanchimont. If you’re on it at all, your average speed for an entire lap is well over 100mph.

It wasn’t always like that. When, three days earlier, I reported to Spa-Francorchamps to take part in the first round of the first-ever McLaren one-make race series, it was with something of a spring in my step. 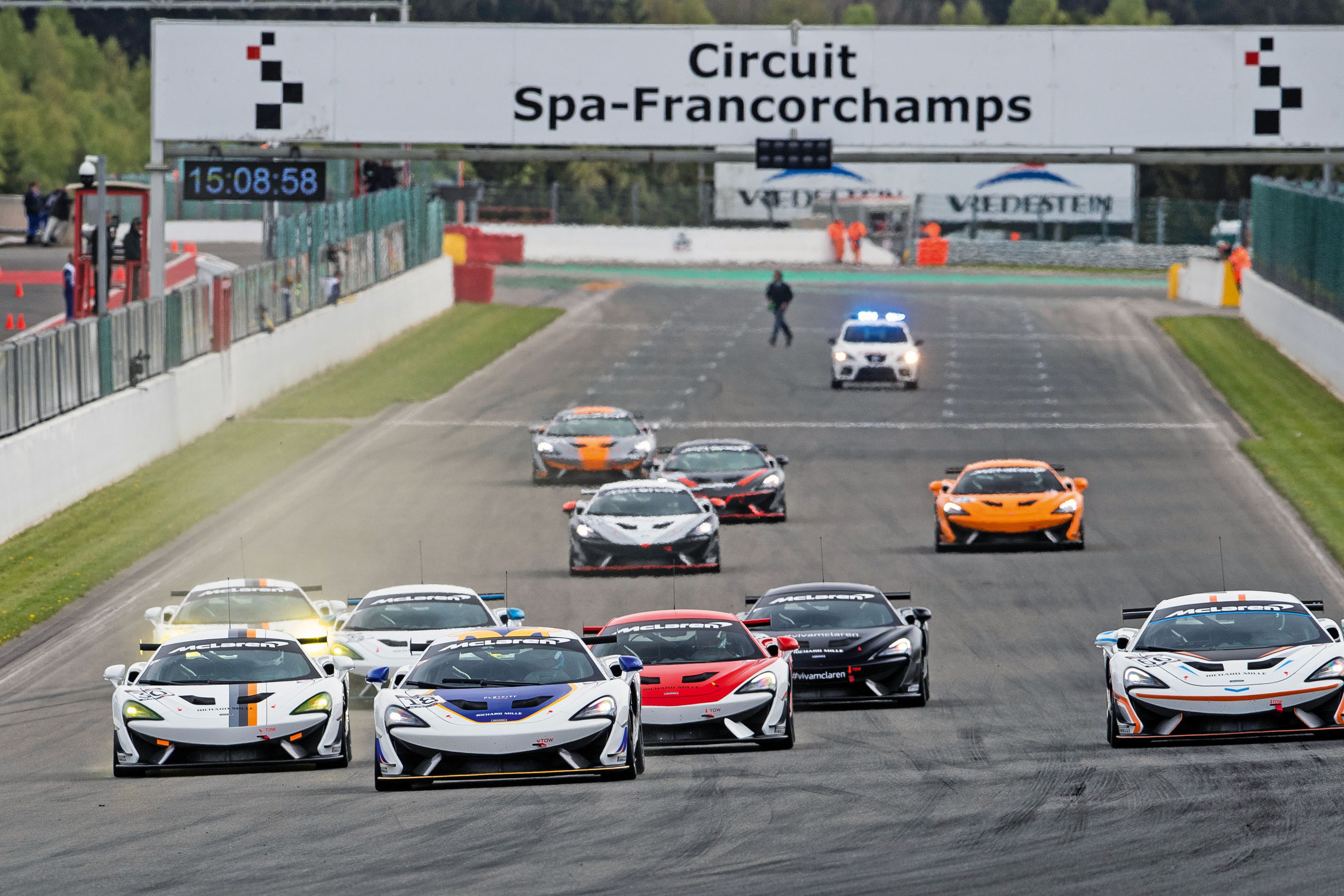 I knew the circuit, having done a six-hour race here in a 50-something- year-old Ford Falcon for more years than I care to count.

The 570S is just about my favourite car on sale and the idea of one with racing suspension, brakes and aero, and thick, slick race tyres seemed too good to be true. What’s more, I’d been allocated my own driver coach for the weekend – Benny Simonsen, who has a victory in the Spa 24 Hours to his name.

Even Bruno Senna was floating around, at the disposal of the dozen wealthy drivers taking part. Okay, 11 wealthy drivers. And me. How wealthy? Well, if you want to do the entire six-round series on some of Europe’s finest circuits, the all-inclusive package costs £162,000, and that’s in your own race car that McLaren will fettle and transport for you. If you don’t have a car, McLaren will be happy to hire you a 570S for one, more or all of the rounds. 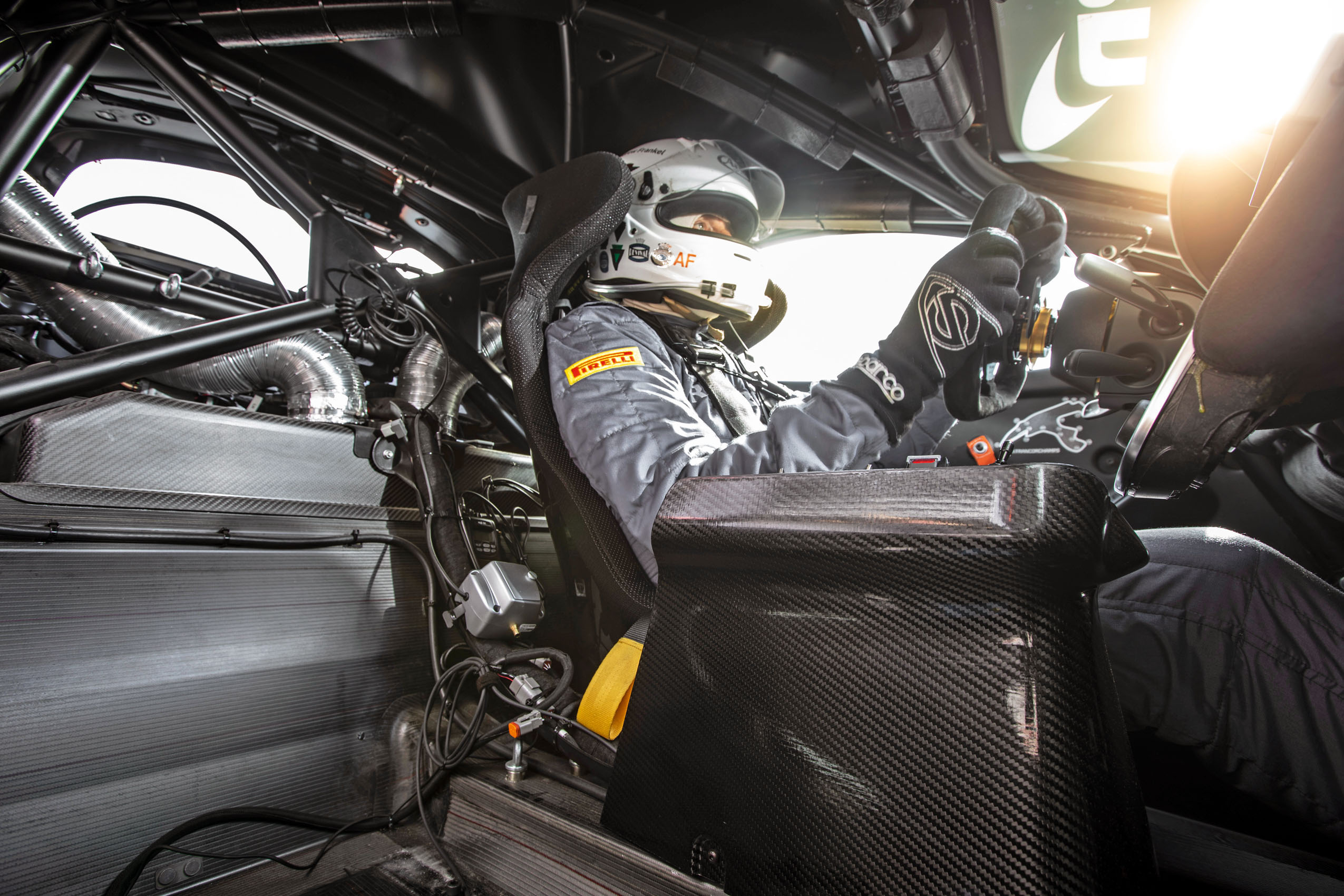 The only other thing you need, save wads of disposable, is an International ‘D’ grade competition licence, which means you’ve already done a reasonable amount of racing. In racing terms, I’d be amazed ifI were not the most experienced driver in the field. And, as it turned out to my horror, by far the slowest in practice. Yes, everyone else had driven the car lots, but still. Slowest? I needed help. I needed Benny. And then I entered a world I knew existed but had never visited before. A world of in-car cameras, digital displays and line after line of spidery data traces crawling across computer screens.

The car measured everything: throttle, brake, steering, the lot. It could probably whip up a tailor-made suit in its spare time. So once my fastest lap was on the screen, Benny went full Blue Peter and overlaid one he did earlier. It didn’t take much interpreting. My traces should have followed his as faithfully as ducklings following their mother; instead, mine looked like they’d spent the night in Wetherspoons.

“Okay,” said Benny, “I see the problem. You have no talent.” Benny, it seems, is quite the comedian. But he is also one hell of a teacher. So for session after session, lap after lap, corner after corner and through every braking, entry, apex and exit phase, he showed me where I’d been going wrong. 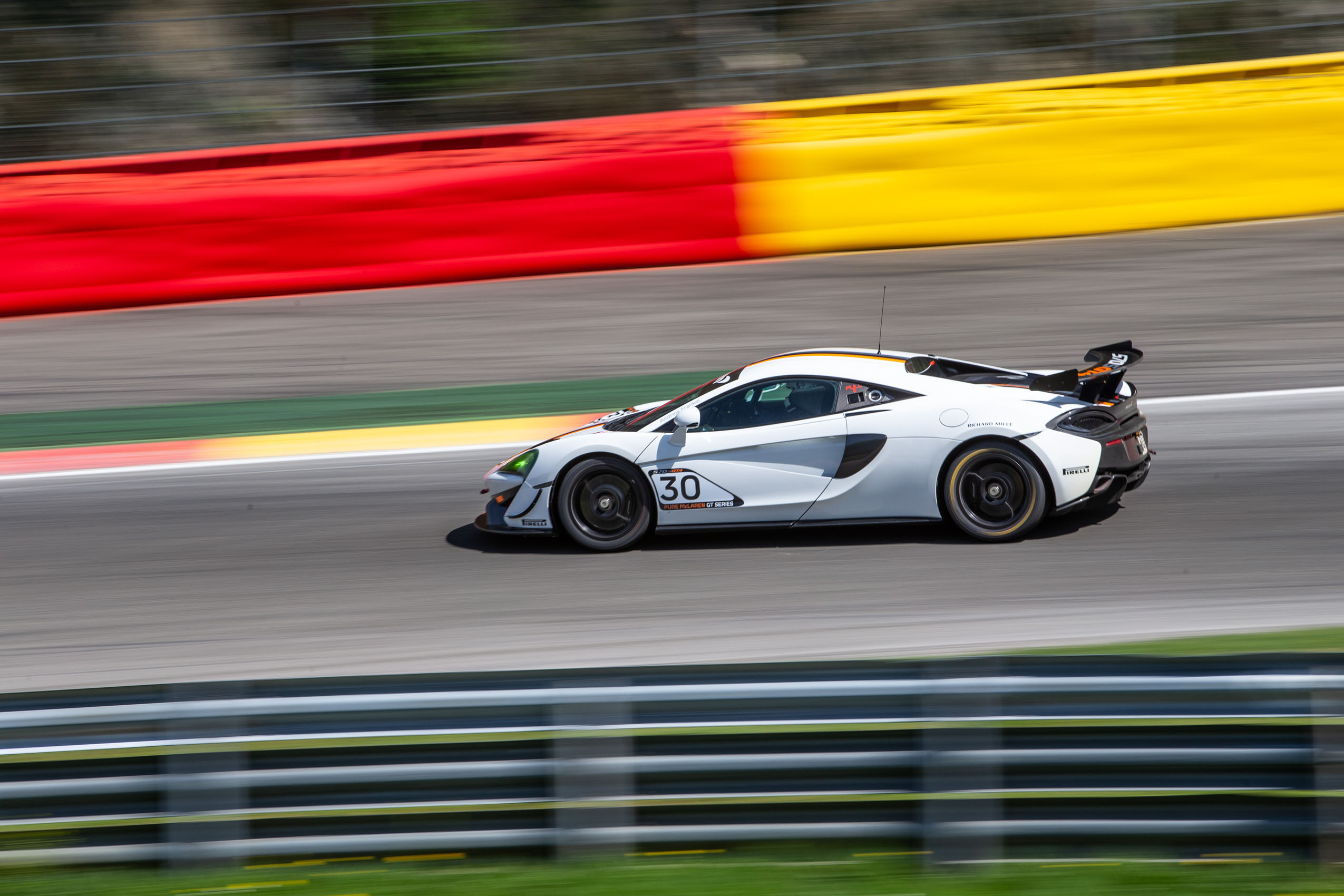 Basically, I’d been driving it like an old racing car with no mechanical or aerodynamic grip. I was overdriving it on the throttle and making it slide because that’s how you drive old racing cars, barely using the brakes because a 1965 Falcon doesn’t have any. For once, I listened, and discovered the brakes are so good that at a downforce-enhanced 160mph, there is literally no amount of pressure my leg can exert that will trigger the ABS, and I’m 6ft 3in and no waif.

We got data from the other cars too, because the rules allow it, and noticed the quickest driver – Mia Flewitt, wife of McLaren boss Mike and a massively competitive, capable and experienced driver – was exiting Eau Rouge at the same speed as me but still going quicker down the straight. So we wound off some wing and fixed that little problem. And Benny and I, with a lot of help from Bruno and the wonderful team of Tim, Tom and my race engineer Hansel Crasto, chipped away at it, fiddling with dampers and tyre pressures, absorbing data, working on the set-up of both car and driver.

And it worked. Without trying any harder, I started to carve huge chunks of time out of every lap, just by applying what I’d learned about driving the car and track. Which meant for the first race I lined up not last but fifth. After a decent start, I exited the first corner in third and within a lap lay second. I could see Mia but could do nothing to catch her. My bigger concern was McLaren group executive chairman, the startlingly rapid Sheikh Mohammed bin Essa Al Khalifa, closing in on me. 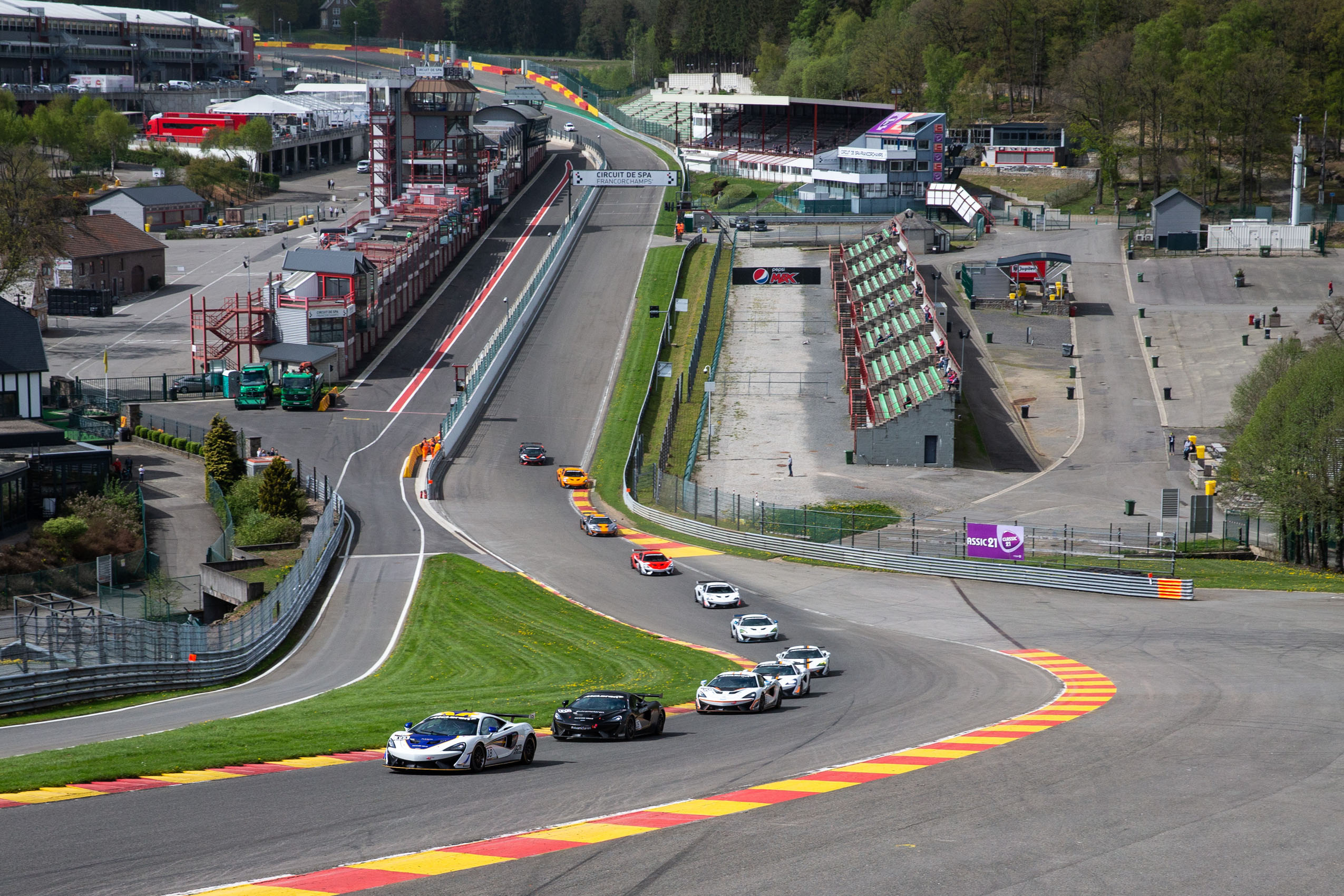 But then he got baulked by a lapped backmarker and I a got away. And that’s how it finished, me on the podium, spraying champagne over Mia and Sheikh Mohammed (I apologised and he was very gracious). A day earlier, I’d have bet all I had that was not going to happen. It sounds like one of those ghastly things all drivers say when they’ve done okay, but I really do owe it all to the team in general and Benny in particular. Yes, everyone had the same data and, yes, everyone had professional driver coaches, but none I am sure had such unprepossessing raw material to work upon as he.

But not even Benny could stop me messing up the second race the following day. Convinced it was going to be wet, I went the wrong way with the set-up, had a scratchy, inconsistent qualifying run and lined up seventh. The race was actually dry but this time I got an average start and could rise only as high as fourth. Another 30 minutes and I may or may not have got to soak the sheikh again, but it was not to be. My only consolation was a fastest lap 0.2sec slower than Mia and 0.3sec slower than Benny’s original benchmark, although there is no doubt he could have gone far faster.

Even so, given I started over six seconds slower than him, I thought that represented reasonable progress over 48 hours. 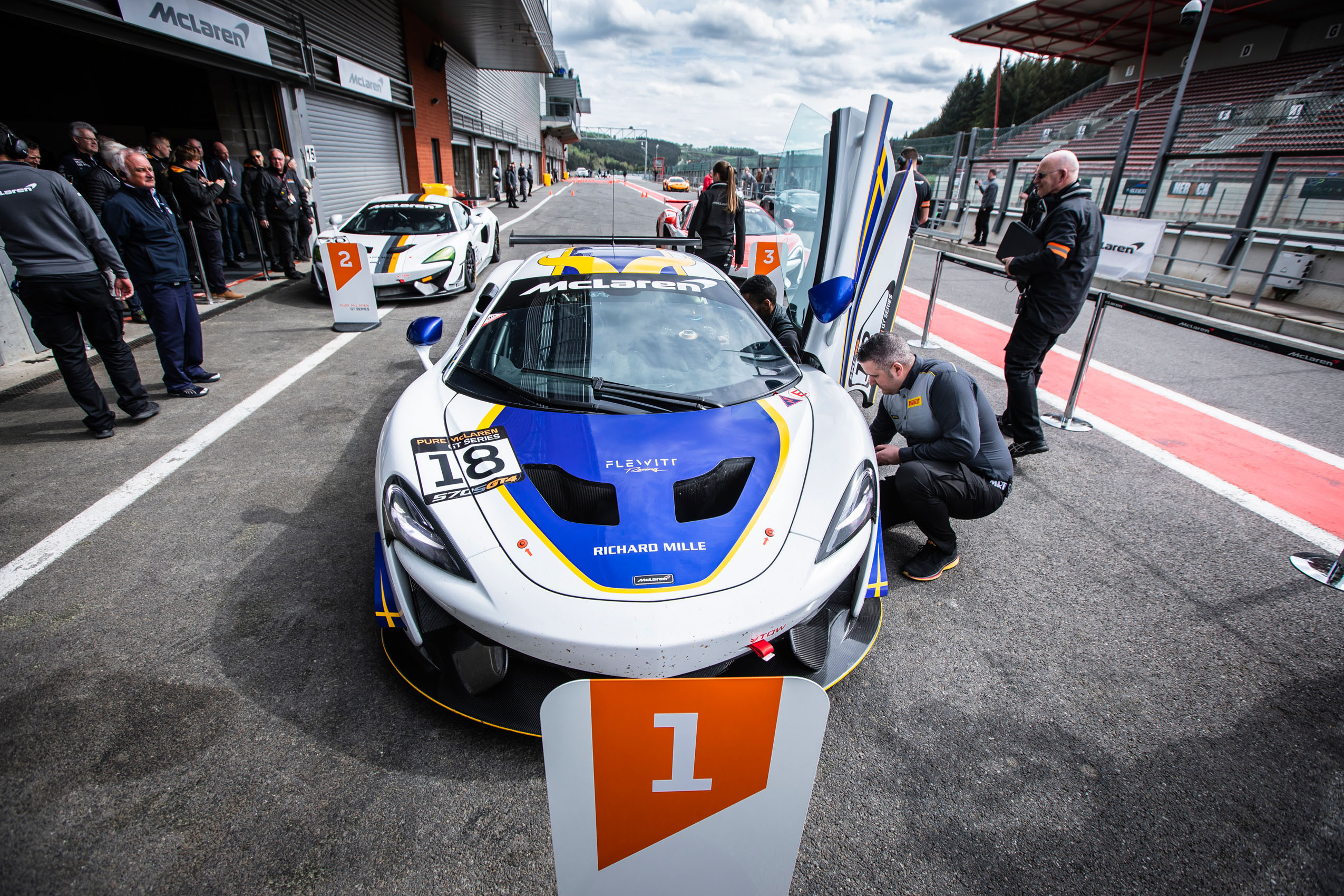 Heading home that evening, however, my thoughts were not of that nor the rather splendid trophy on the passenger seat. It was just about how much fun I’d had. The whole experience was a window into a world I’ve not seen before and, at the age of 52, my driving improved more in two days than it had in all the decades I’ve been doing this job. Amazing what a spot of well-aimed tuition can do.

Procar - In 1979, this series put a bunch of F1 drivers into a field of identical BMW M1s and let them do their worst. It survived two seasons and plenty of crashes before folding.

Citroen C1 Racing Club - Surely the most affordable way to go endurance racing in the world, and with a packed fixture list including 24-hour races at both Rockingham and, yes, Spa.

Your bias is showing...AGAIN! Many GT4s are restricted according to the balance of performance rule. That's why 570s and AMG GTs with turbo V8s can compete in GT4 against vastly cheaper Alpine A110s, Caymans, 370Zs and KTMs. Or to put it another way, isn't it a bit pathetic that a 570S is racing against cars with half the cylinder count and a fraction of the price?

so ostentateously absent in the race of all races: Le Mans? It has been for years now.