The pandemic’s impact on the private hire industry has severely affected second-hand hybrid car values. Non-plug-in models have traditionally been the tool of choice for the likes of Uber drivers, thanks to the reliability and suitability for town and city driving, and this generated good demand and healthy prices for used examples.

However, Covid-19 has resulted in far fewer people using public transport over the past year. Department for Transport figures show that all car usage – public and private – amounted to just 66% of a typical day’s worth on Monday 1 March 2021, compared with 102% on Monday 2 March 2020. Figures dipped below 30% during the first lockdown, which “decimated” the private hire sector, according to Cap HPI’s head of valuations, Derren Martin.

He said prices of petrol hybrids at three years and 60,000 miles dropped by 10.1% year on year in January. “[With] certain models like the Prius and Auris, a lot of their sales go to that sector, and if you’re a taxi driver or an Uber driver, you’re not going to replace your car,” Martin said.

Values of used petrol hybrids fell by 16.9% during the week beginning 8 February, according to Cazana. The data specialist also said the average price of a second-hand Toyota Prius in January 2019 was more than £18,000, but that had plummeted to less than £12,000 in January 2021. Average mileage doubled from approximately 30,000 to 60,000 during the same period, as well-used ex-private hire models hit the market.

“Hybrids and plug-in hybrids – the used value of those has gone through the floor, because nobody is taking cabs,” said Graham Howes, commercial director at CD Auction Group. “We’ve got leasing businesses selling them for £3000 below the book [the recommended sale price] just to get out of them. Priuses – we can’t give them away. We are selling them, but only if the vendors are being really sensible about their value.”

In addition to the lack of demand for private hire, the first phase of London’s Cleaner Vehicle Discount regulations, introduced in April 2019, ruled out conventional hybrids from entering the congestion charge zone for free. The same will apply to plug-in hybrids from 25 October this year and to all cars from 25 December 2025, gradually eradicating vehicles that can drive in the city centre without paying the current £15-per-day fee and further dampening the local market for all types of used hybrids.

The overall number of second-hand hybrid and plug-in cars began to increase dramatically in the second half of last year – initially when the market rebounded shortly after the UK’s first lockdown. Cazana’s data shows that they rose from approximately 2% of the market in July 2020 to more than 6% in January 2021. Used Priuses made a similar move during the same period, rising from a market share of less than 0.1% to 0.25%, which suggests owners have been keen to move them on.

Cap HPI said used plug-in hybrids suffered the secondbiggest fall of any propulsion type in January, as average prices of three-year-old, 60,000-mile examples dropped by 6.7% year on year. Equivalent diesel hybrids fell by 5% and battery-electric cars by 3.4%. By contrast, prices of like-for-like petrol and diesel cars rose by 2.3%. 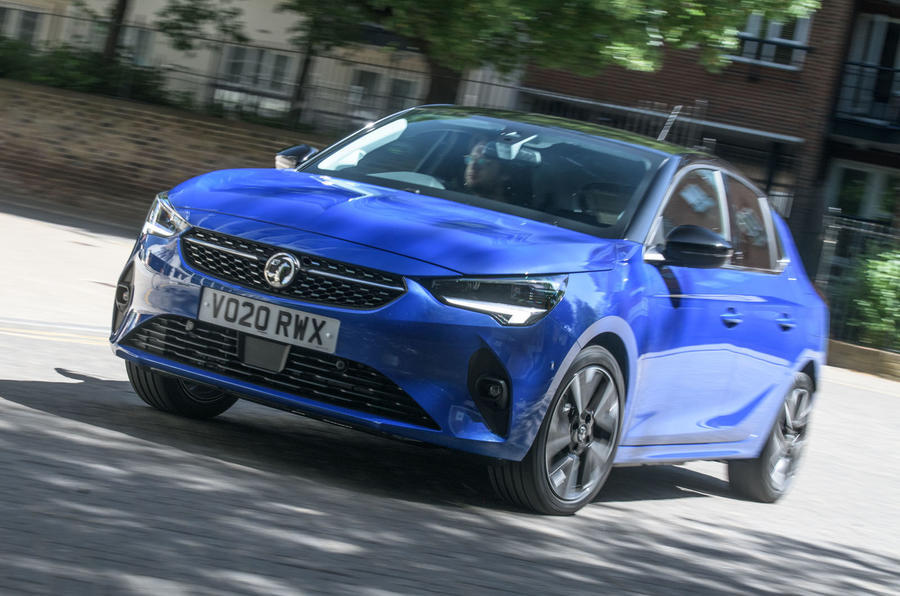 Combustion-engined cars continue to dominate the used market and are proportionately much cheaper than electric or hybrid models, which, according to Martin, explains their stronger showing.

“People just aren’t prepared to pay these prices [for used electric cars],” he said. “I also think there’s a bit of a comfort blanket around petrol and diesel. People think: ‘I can get a petrol car for this much. We’re in a global pandemic so I’m going to stick with what I know.’”

Used car experts broadly expect used electric car values to fall to more palatable levels as they become more popular and form a bigger part of the vehicle parc. However, signs have begun to emerge of a two-tier market, where those with relatively low ranges depreciate faster.

“The bigger-battery EVs, and therefore the bigger ranges, are more popular and they are holding their value better,” said Rupert Pontin, Cazana’s director of insight. “You’ve got those like Tesla and Jaguar that really are ahead with their ranges, and then you’ve got the likes of the Vauxhall Corsa-e and, actually, some of the Audi and Volkswagen Group products, with shorter ranges, which will have a much steeper depreciation curve than others.”

The disparity is already noticeable in UK auction centres. “In the previous year, we had a batch of Nissan Leafs and some [Renault] Renault Zoes and… being brutal, nobody wants to buy them. On the other hand, Teslas outperform against Cap [valuations],” said Howes.

The government’s 2030 ban on internal combustion engines has led to speculation that values of used petrol and diesel cars will plummet, but residual value specialists do not expect this to happen – at least not during this decade – because the supply and demand nature of the used market means their decreasing numbers should, if anything, strengthen prices.

“I actually think that the residual value performance for diesels will get stronger, because the demand for the cars will still be there,” said Pontin. “In the next six months to a year, we are going to start to see a perceived shortage of diesel product [due to lower new registrations] in relation to demand. As a result, pricing and residual values will get stronger, and for those people who still register a new diesel car, they are going to make more money than people expected [when they sell it].”

I'm sure this is just temporary and values will recover as the taxi market resumes. They may continue buying a few diesels, but I can't see operators switching to used EVs given their comparative rarity and high prices. I'm seeing quite a few new generation Yaris models around, but not seen a new Jazz yet!

si73 24 March 2021
In contrast, I've only seen one new Yaris, I thought it looked really good in a metallic red, yet I've seen a fair few new Jazz's and they look pretty anonymous and boring by comparison.