BACK TO ALL TOP 10s
Currently reading: Top 10 best estate cars 2021
UP NEXT
Family electric cars

The wonderful thing about estate cars is the sheer breadth of the class. This is simply a consequence of the fact that, whichever type of car the public wants, there will always be a portion who want it with added practicality.

At the extremities of this world lie such oddities as the stretched-out Mini Traveller of 1960 and the V12-engined Ferrari GTC4 Lusso shooting brake, but even the more humdrum middle ground is overflowing with variety. That's because while the following 10 cars share a common utilitarian cause, they deliver it in different ways.

Look past the big boot and some strive for opulence. Others deploy every trick in the book to make their owners' lives easier. And a couple have quietly prioritised dynamism. A handful, we might add, manage to do it all, albeit at a price. So which are the best options if you're an Autocar reader who wants only one car to do it all?

BMW's mid-sized stalwart is our preferred mid-sized premium saloon and it's arguable that ballooning the rear bodywork only increases its vast all-round appeal. The first reason for this is that air suspension is standard fit at the rear axle, and combined with the optional adaptive dampers, this makes for supreme ride quality.

The second reason is that BMW's strong range of diesel and petrol engines allows you to prioritise economy with four cylinders or ensure progress is always deliciously effortless with a straight six under the bonnet. That the G30-generation car isn't quite as incisive as its forebear also matters less for the Touring version, whose 1700-litre load bay with the rear seats down is right in the mix.

Save money with new 5 Series deals from What Car?

Read our full road test of the Skoda Superb and you'll learn that this is a car "on its way to becoming one of the very best family cars in the world". It's not difficult to see why, either. In estate form, Skoda's chiselled flagship model boasts a cavernous 1950 litres of carrying capacity with the rear seats folded flat – more than even a Mercedes E-Class Estate.

There's also now a petrol-electric version – the Superb iV Estate – that pairs the 1.4-litre TSI engine with an electric motor. If you can make the electric range of around 25 miles work in your routine, the fuel (and tax) saving is just another reason to consider the big Skoda.

An estate body takes the edge off the 508’s style, yet doesn’t address all of the car’s practicality limitations

Meanwhile, finding noteworthy fault in the cabin ergonomics, materials quality or rolling refinement is also a fool's errand when you consider the range starts at so much less than you'll pay for the usual premium contenders. 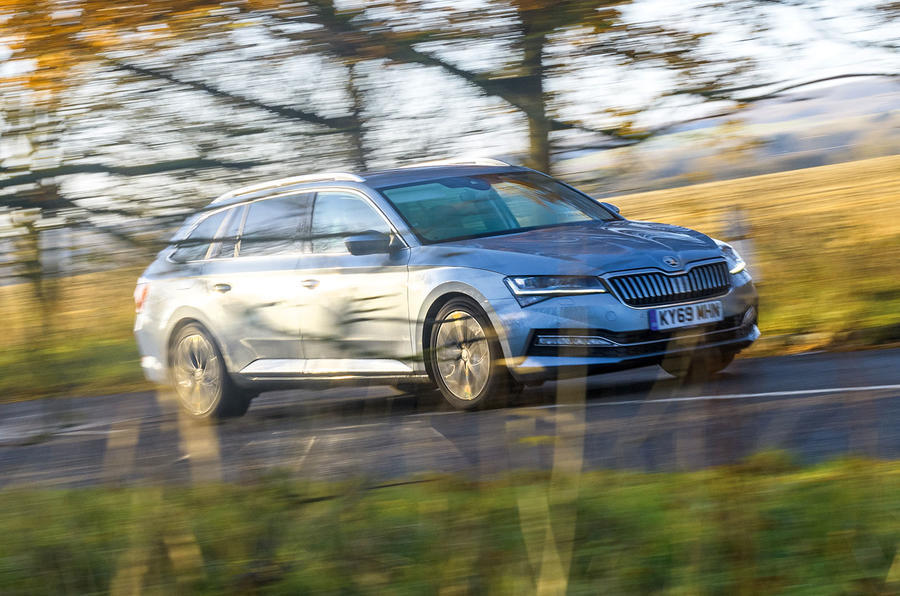 Save money with new Superb deals from What Car?

The least expensive car here punches well above its weight both in driver appeal and in practicality, not least because, at almost 4.7m long, its footprint is significantly greater than before. As a result, boot capacity raises from 375 litres in the hatch to 608, increasing to 1653 with the seats folded flat.

For long-haul family-car duties, we'd spec our Focus Estate with Ford's adaptive dampers, which help massage a ride quality that otherwise strays into the realm of coarseness. However, you might also consider the ST version, which is available both in diesel and petrol form and with up to 276bhp in the latter. 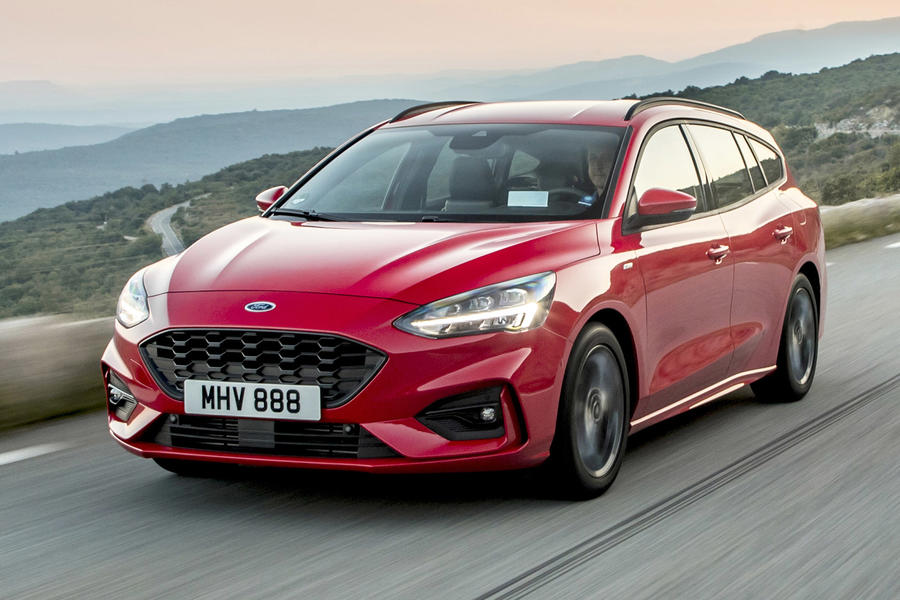 ​Save money with new Focus deals from What Car?

Arguably the most compelling everday proposition on this list is also the most expensive. Indeed, paying more than £60,000 for a 3 Series – especially one without an M badge on its bootlid – might seem foolish, but Alpina's deft retuning of the standard model's suspension and engine results in an exquisite blend of handling, performance and comfort.

It's for this reason that these rarely seen Q-cars are among our road testers' favourites, and Alpina's lavish interiors – which optionally use the same leather as Rolls-Royce – are another reason to consider these 190mph family wagons.

There's one other thing to consider: in 2020 Alpina will introduce the new, G20-generation B3 Touring, whose increased figures of 462bhp and 516lb ft will ensure its nips at the heels of bona fide supercars. If it can improve on the existing model in terms of handling and ride, it'll be something very special indeed.

​Save money with new 5 Series deals from What Car?

Does the E-Class – also available in coupé and saloon bodystyles – get any more convincing than this? We think not, because if the role of a big Benz is to convey the whole family in enviable comfort, the estate is where you should spend your money. On this list, only the cavernous Skoda can compete with the Mercedes' outright carrying capacity.

So cultured is the ride quality and effortless the driving controls that piloting the E-Class Estate is almost as relaxing as sitting in the passenger seat. Those who want entertainment when the road starts to twist will be better served elsewhere, though.

​Save money with new E-Class deals from What Car?

Audi might have diversified its range to include superminis and a mid-engined supercar, but a four-wheel-drive mid-sized estate, preferably powered by an effortlessly smooth-spinning diesel V6, exemplifies what the brand is about.

And although a BMW 5 Series will better reward its driver every day of the week, in terms of mechanical refinement, technological sophistication and percieved cabin quality, the Audi pips its compatriot. Along with luggage capacity to spare, this car delivers the authentic Audi experience. Just be sure to choose air suspension.

​Save money with new A6 deals from What Car?

Just five miles in a V90 is enough to show you firmly where Volvo's priorities lay when designing this car. The high waistline and steeply raked dashboard cocoon passengers within a materially rich cabin, and the V90 feels supremely robust and secure, given the luxury on offer. The ride quality makes good on that promise of insulation from the outside world, and although the suspension can feel a little brittle at low speeds, it's right up there with the best as a motorway cruiser.

Few cars gobble up colossal mileage in such style and comfort, but the V90 ultimately trails the class leaders because of its loose body control, a slight imprecision in the driving controls and relatively coarse four-cylinder engines.

​Save money with new V90 deals from What Car?

With its higher roofline, the 508 Station Wagon immediately outscores its saloon sibling because rear head room isn't so restricted. Granted, this estate is not as spacious some rivals, or as good to drive, but it rides well enough at speed, steers with pleasing accuracy and is arguably the prettiest estate car in any segment.

Those who haven't set foot inside a Peugeot for some time will also be pleasantly surprised not only by the fit and finish of the interior but also by the imagination on display. Economical – although not particularly expressive – engines are another reason to give the 508 SW at the very least your consideration.

​Save money with new 508 deals from What Car?

New WLTP emissions tests have robbed Jaguar's only estate of its V6 petrol engines, although it's still possible to equip the car with a 296bhp V6 diesel that's conspicuously better mannered than the 2.0-litre diesels on offer. But whichever engine sits in the Sportbrake's nose, you're getting arguably the best-handling chassis in this class, and one that changes direction beautifully thanks to the weight and response of Jaguar's trademark steering.

The top-billing petrol model pairs the same 296bhp 2.0-litre petrol engine from the F-Type with all-wheel drive and is a superbly competent all-weather family car. Mechanical refinement and a cabin off the pace of German rivals in technological terms prevent the handsome Jag from ranking more highly.

​Save money with new XF deals from What Car?

There are two ways of approaching the long, chiselled proposition that is Volkswagen's largest – and recently updated – estate. Either it is an affordable alternative to rivals from BMW, Audi and Mercedes with an impressively small trade-off in interior fit and finish and an excellent motorway ride; or it is an expensive exercise in badge snobbery next to the even more capacious Skoda Superb Estate.

Certainly, the handling, while secure and predictable, is nothing to write home about in dynamic terms, so the question is whether you're willing to fork out for the Passat's visual presence and percieved quality.

​Save money with new Passat deals from What Car?

Good luck specing your focus estate with adaptive dampers to improve the ride, they are only available on the hatch. Otherwise a focus ST estate seems to be all the car I’d want, perhaps with some slightly more refined styling.

Can't believe you've put the 375 litre Focus in as a top ten estate. That is an embarrassingly small boot.

The VW Golf is a similar size and yet has a boot nearly double,and this far more usable for what estates are designe .

That said, I wish an Octavia estate (unbelievably not in your list) fitted into my garage. Size creep in cars is ridiculous.

Octavia all the way

Huge inside for passengers and luggage, decent to drive with a good ride, comfortable seats, good performance and economy, cheaper than the Superb and a better all rounder than the Focus.  Can't believe it does not get a mention.