BACK TO ALL TOP 10s
Currently reading: Top 10 best city cars 2022
UP NEXT
Compact crossovers

Good city cars are small, practical and easy to drive around town, but the best in class also have bold designs, plus peppy engines that make them fun to drive. These are the ones Autocar recommends
Open gallery
Close

City cars are getting better all the time. The days of the cramped, sparsely kitted-out, cheap runabout are long gone, and while the class isn’t populated by quite as many brands as it once was, those manufacturers who have stayed have, between them, driven up standards across the board.

Our list of the top ten best city cars is stuffed with perky little cars designed to be surprisingly practical and good around town, but mixes those traits with appealing designs, quirky colour choices and generous standard equipment levels. In some cases, they even outdo some of their bigger supermini counterparts by being fun to drive when the occasion allows.

Interior quality and general desirability have increased significantly, as has practicality (this is now one of the most accommodating cars in its class) while its sharp new exterior lends it an additional dollop of style appeal. It rides absorbently if a little noisily and firmly on range-topping 16in wheels, but is surprisingly well-equipped (not least with active safety kit) and its 82bhp atmospheric four-cylinder engine (now something of a rarity in cars of this size) lends it decent drivability and useful real-world performance.

It might not have the star appeal of the VW Up GTI models behind it, but as a well-rounded, sensible, well-equipped city car it takes pride of place at the top of the class.

Save money with new i10 deals from What Car? 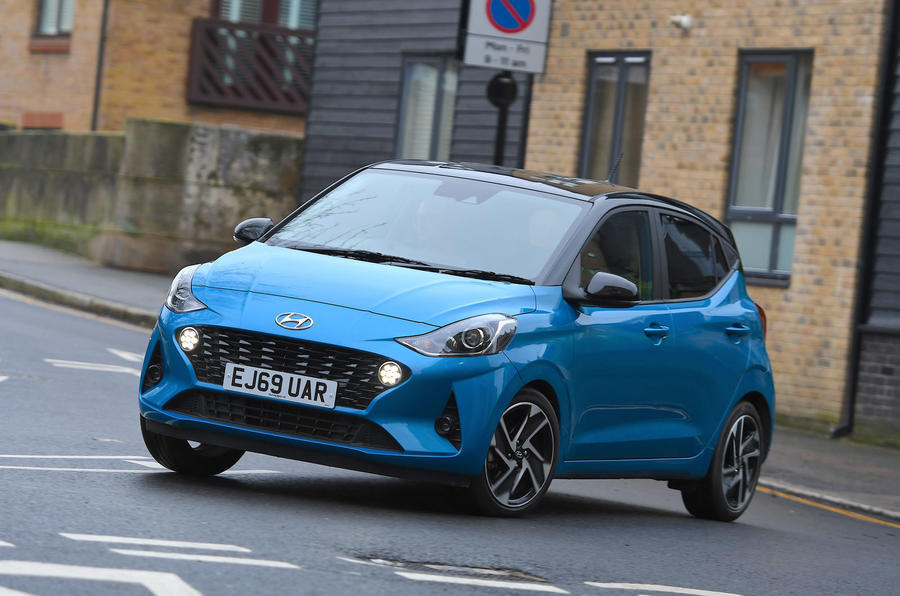 A quirky contender in this rather congested segment, the Ignis is a zesty little car blessed with charm, value, space, versatility and fuel-efficiency. The fact that it looks more like a crossover than some of its contemporaries do, meanwhile, can do it no harm with market tastes being as they are.

It is brilliantly packaged, with a massive amount of interior space for its size. The interior looks a little bit flimsy and low-rent in places, and Suzuki’s touchscreen infotainment system leaves a bit to be desired; but if you don’t mind if cheap cars look and feel like they’re a bit cheap in places, as long as they’re still fairly hard-wearing, chances are you won’t care.

The car’s on-road dynamics aren’t as sharp or refined as some rivals. Performance is relatively strong, with Suzuki’s clever 12v mild hybrid system adding torque just where an atmospheric engine needs it, and handling is fairly perky; although the car’s ride can feel a little bit crude over bigger bumps.

It is possible to spec the Ignis with Suzuki’s AllGrip all-wheel-drive system, meaning this little car will go further off-road than many of its rivals. That, added to the rest of the car’s appeal, makes for a surprisingly compelling and characterful package.

Save money with new Ignis deals from What Car? 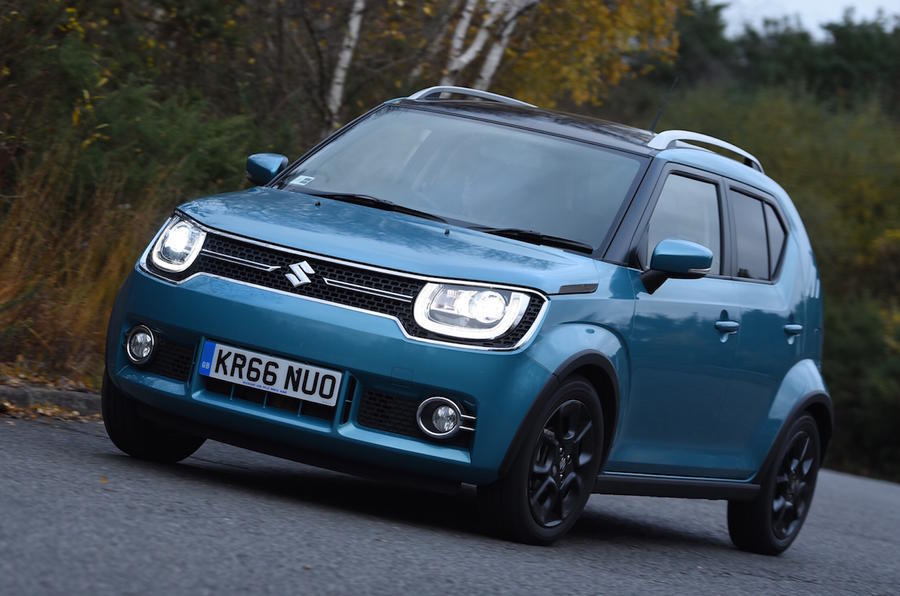 Just like its cousin, the Hyundai i10, the Kia Picanto has grown up significantly since it first graced our roads.

The latest car is certainly better looking than its predecessors, but is also finished better inside and gains a decent level of standard equipment. It even scores fairly well on the ride and handling front, with the Picanto dealing with the scarred British roads better than some.

Admittedly, its 66bhp 1.0-litre engine does feel a bit weedy at times, but the larger 1.2-litre four-pot is a far more willing workhorse; and at the top of the engine range, meanwhile, the car’s 1.0-litre turbocharged three-pot engine is a trump card that not even the related Hyundai can play. In fact, there’s little that separates the Picanto from the i10 save their looks, equipment, that engine, and the fact the Kia’s boot is slightly smaller. If you like what you see, by all means pick the Kia.

Save money with new Picanto deals from What Car? 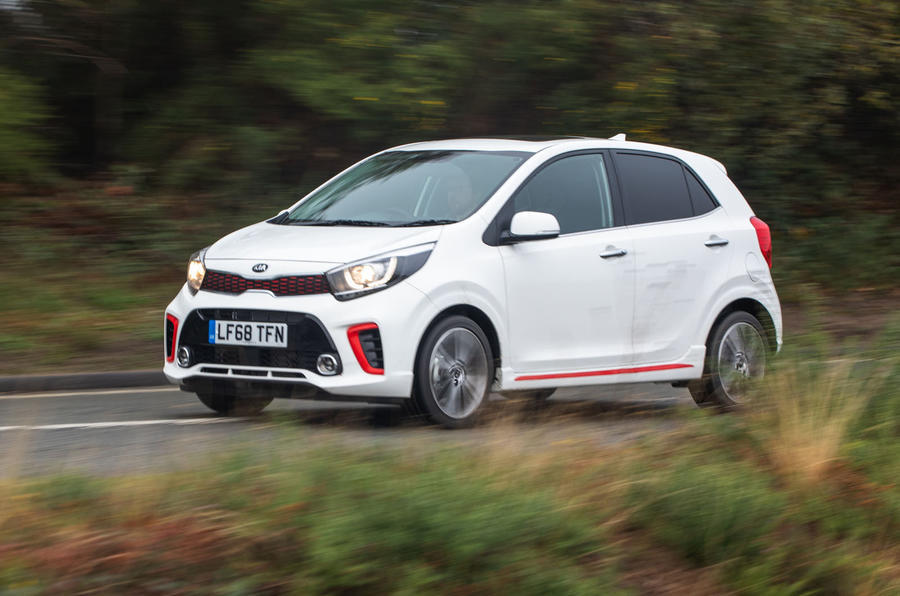 The Up may be the smallest car on offer in the Volkswagen range, but it doesn’t miss out on all the hallmarks that the marque is renowned for. It may not be revolutionary in the segment, but the Up beats its closest rivals on finish and outright desirability.

That said, a recent rationalisation of its engine line-up means it’s no longer our go-to pick of the segment. As far as its petrol engines are concerned the slightly gutless 59bhp three-pot that we always felt was the weakest performer in the range is now the only combustion engine available - save that in the go-faster Up GTI, which is a slightly different kettle of fish. Speaking of, with its punchy 113bhp turbocharged three-pot under the bonnet and endearing handling, this sportier strain of city car has a strong claim for not only being the driver’s choice in the segment, although it’s pricier too..

As with its cousins from Seat and Skoda, the Up is also available in all-electric guise. But while battery power suits the dinky city car well, its elevated price doesn’t make it as accessible as you might think a city car should be (although the e-Up is cheaper than it used to be, it’s still a £20k car).

Save money with new Up deals from What Car? 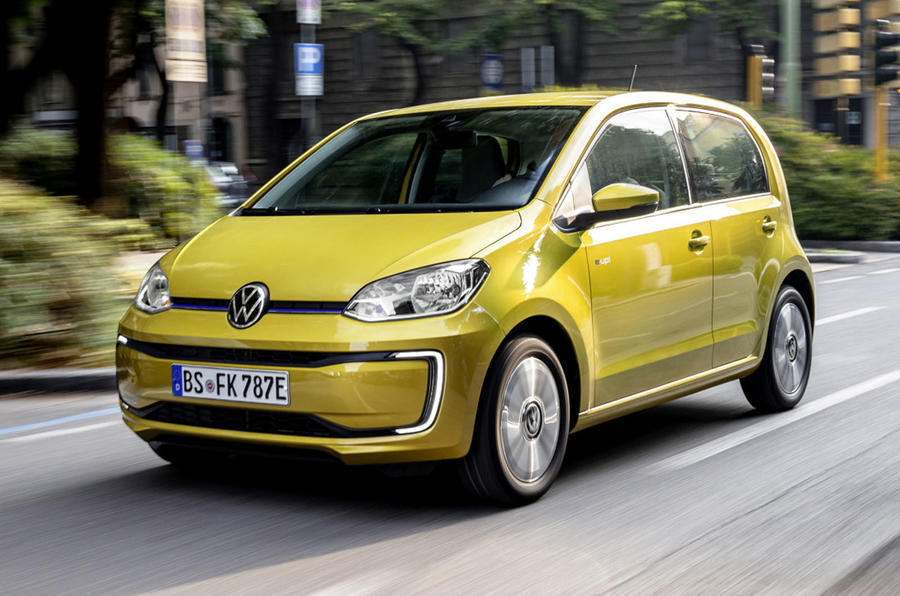 No longer is the Citigo the cheapest member of the Volkswagen Group triumvirate. This smallest of Skodas is now exclusively available as an electric vehicle, and calls on a 36.8kW battery to provide it with up to 170 miles of range on the WLTP test cycle; which turns out to be more like 120 miles in mixed real-world use.

Electrification suits this new Citigo-e iV incredibly well, actually. Performance is punchy enough courtesy of its instantaneous torque, while its soft-edged ride makes it a comfy city car. Travel at pace on undulating roads and its additional mass does makes itself felt, though.

Were it not for the sharp increase in price that accompanied its switch to electrification (the cheapest model is now just under £17k), the Skoda would sit closer to the top of this list; as it is, even though it’s about the cheapest ‘proper’ EV you can buy, that price will be the biggest obstacle to its ownership. Nevertheless, this remains a well-made, refined, usable and - thanks to its electric motor - cheap-to-run city car. Highly likeable.

Save money with new Citigo deals from What Car? 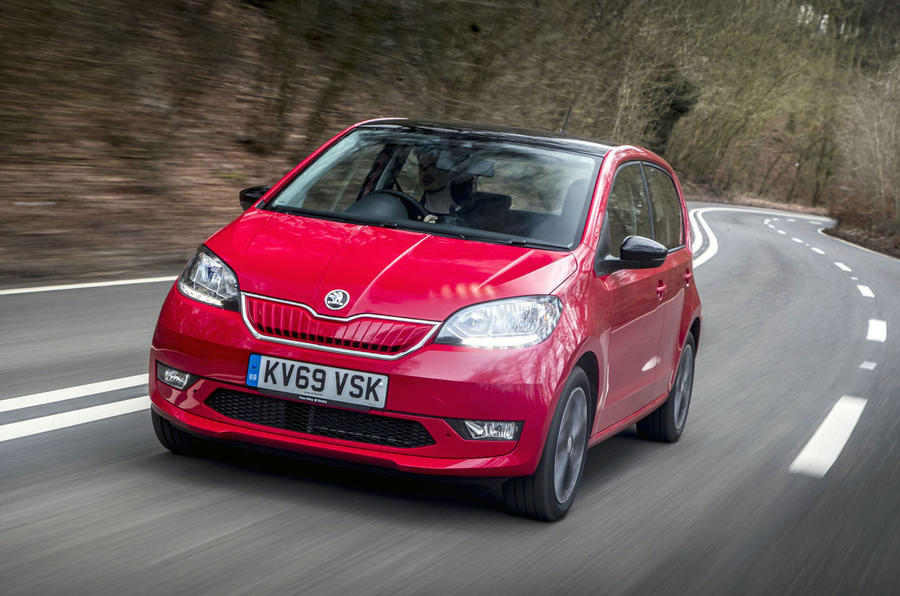 The dinky Aygo was treated to a mid-life facelift in 2018, which helped sharpen its already appealing styling while also introducing a greater level of standard specification than before.

The Aygo’s 1.0-litre three-pot motor also had its wick turned up slightly to 71bhp from 68-; but its naturally-aspirated configuration means its 68lb ft of torque isn’t particularly accessible, compromising its real-world drivability. Those competitors with turbocharged motors are preferable in this regard. Still, there is a good deal of enjoyment to be had from revving it out when the mood takes you.

A sprucing up of its cabin also lifts its appeal, as does a sharper and more responsive infotainment suite; while the car’s bold exterior styling should still appeal to younger owners.

Save money with new Aygo deals from What Car? 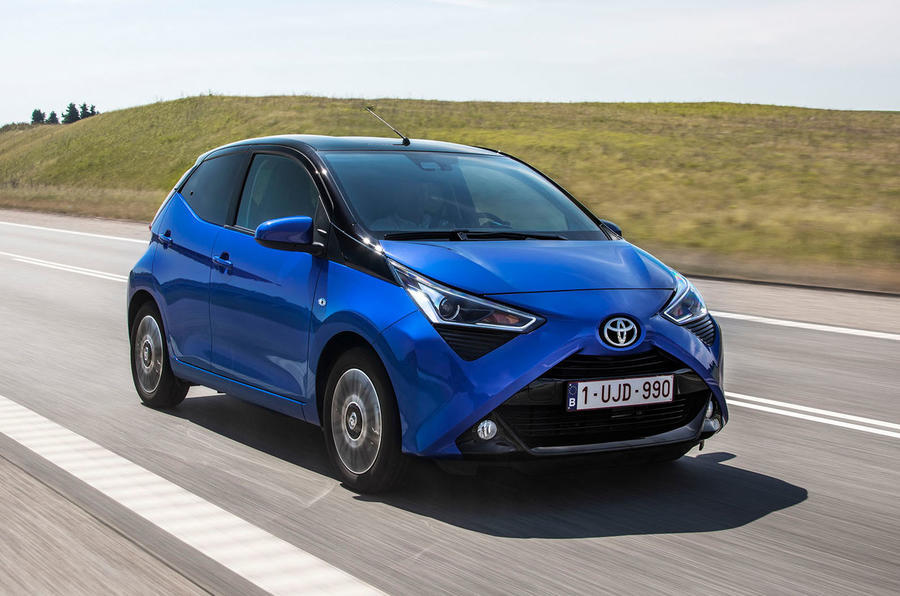 The same story applies to the classically style-driven Seat Mii as it does the Skoda Citigo which you read about earlier. The Spanish arm of the Volkswagen Group’s city car is now electric-only, and uses the same 36.8kW battery to power its 82bhp electric motor.

But while the Mii may be slightly more desirable on the design front than its Czech counterpart, it isn’t quite as easy to recommend. Its ride is a bit firmer, while Seat claims a maximum range of up to 160 miles versus the Citigo-e’s 170-mile maximum. The clincher in this respect, however, is the price: the Mii Electric costs £19,300 after the plug-in grant - which is a lot for a city car, if still fairly affordable by wider EV standards.

Save money with new Mii electric deals from What Car? 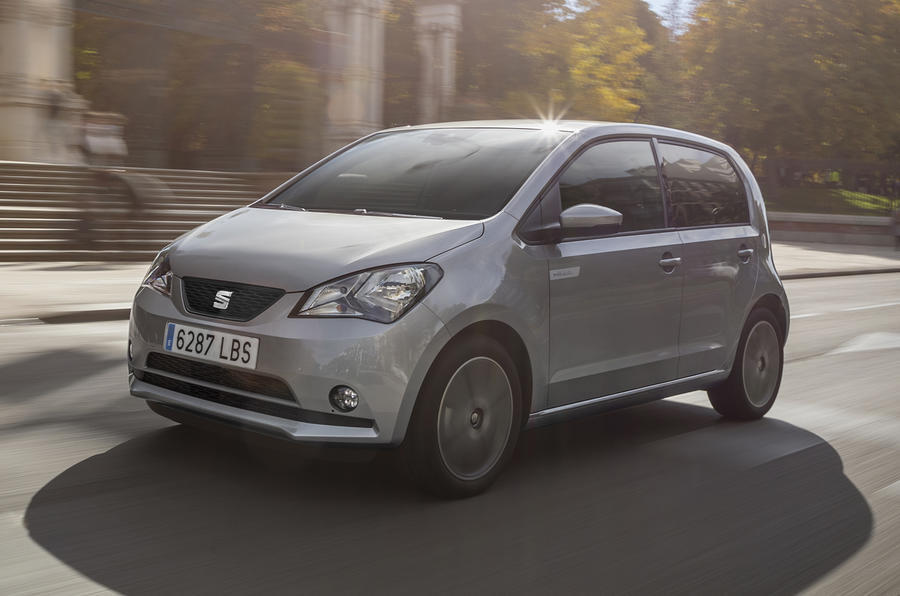 The Panda is different in character to most of its rivals. Fiat itself states that it is more of an ‘essential car’ than a city car, which hints at the cheery simplicity that characterizes the car best.

Now in its third generation, the Panda may be long-in-the-tooth compared to its younger, fitter and more frugal competition, but it doesn’t stop its charm shining through. While it may be sparsely equipped on the inside, it remains robust and more practical than most on this list. It’s now available as a mild-hybrid, too, as well as in 4x4 form.

Save money with new Panda deals from What Car? 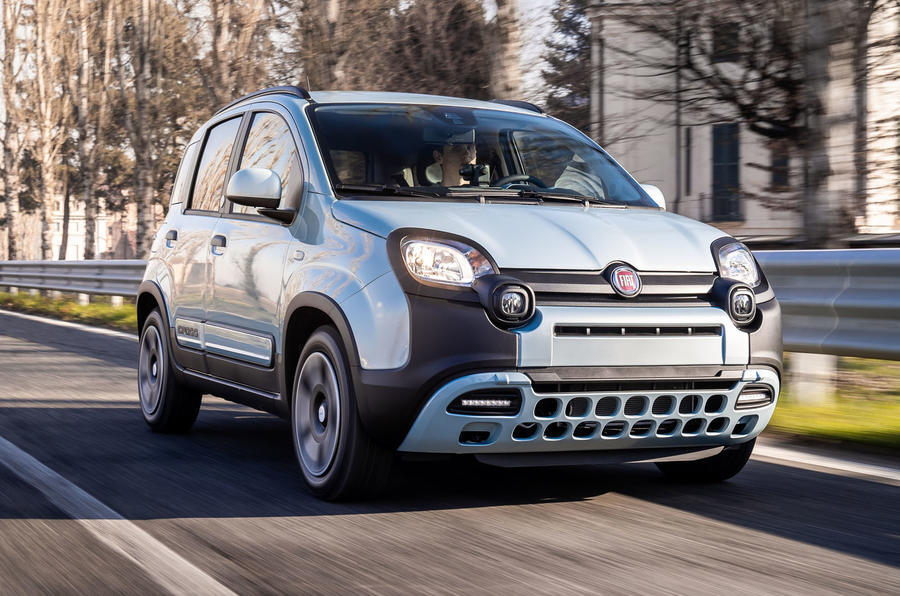 The reborn Fiat 500 has now been on sale across three separate decades, which is quite an amazing thing to consider given it still looks so fresh some 13 years after its launch. And to keep it as appealing as it possibly can, Fiat has launched a new mild-hybrid version with a 69bhp three-cylinder petrol engine.

It’s the same unit that appears in the flawed but loveable Fiat Panda Mild Hybrid, and until the fully-electric 500 arrives later this year it’s the only powertrain available under the 500’s diminutive bonnet.

Performance is pretty strained, and you really have to thrash it to extract any meaningful acceleration, but it remains a charming car to drive. It feels eager and keen to impress - even if it doesn’t ride as well as its more sophisticated rivals, isn’t as comfortable or roomy inside and doesn’t handle quite as convincingly. Still, it remains a likeable city car - and is easily one of the most stylish in the class. Which probably counts for quite a lot.

Save money with new 500 deals from What Car? 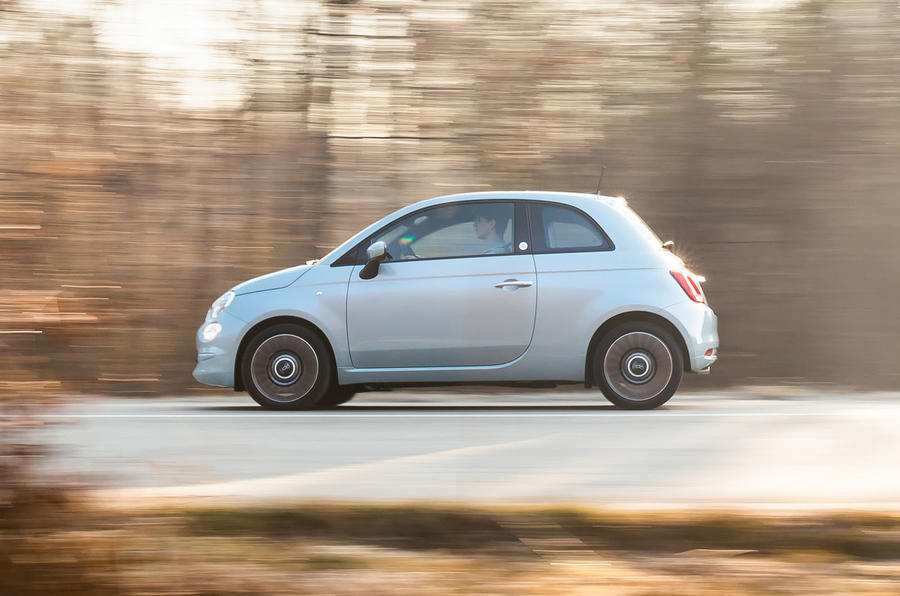 So the Dacia Sandero isn’t a city car per se, but given the fact it can be had for considerably less than most of the cars on this list, it seems reasonable enough to include it. With a larger footprint than a regular city car, the Sandero is understandably more spacious inside, but its cut-price positioning does come at a cost.

Its interior looks and feels decidedly old-school, the seating position is a touch awkward, and while it will go around corners it proceeds to do so with considerable body roll. But its 89bhp turbocharged three-pot feels willing and returns decent economy, and even with things like satellite navigation and rear parking sensors it’ll cost you less than £10,000. Which is by no means a bad thing.

The Sandero is also one of the few factory-warranted new cars you can buy in the UK with an LPG-fuelled engine, which is another string to its appeal for those who’re looking for low-emissions transport on a budget.

Save money with new Sandero deals from What Car? 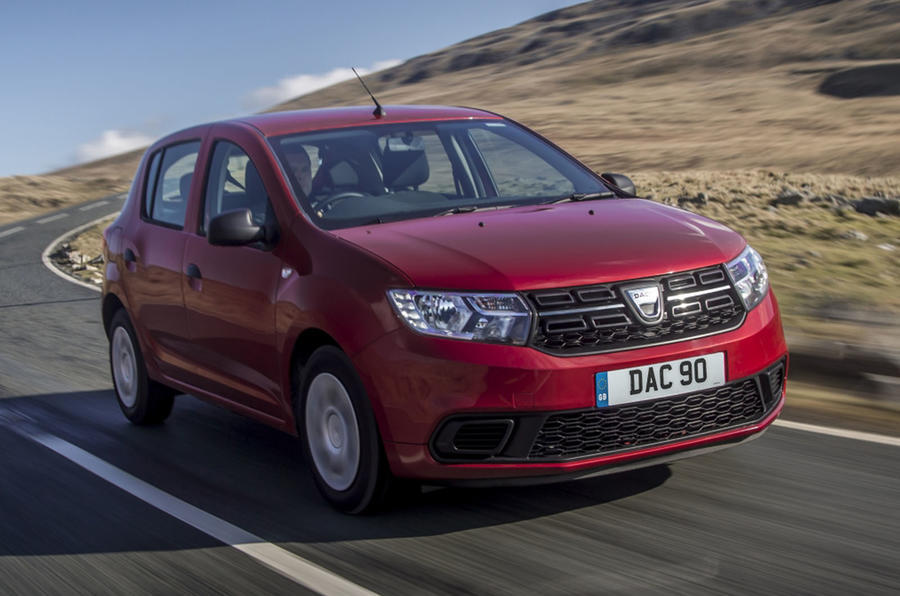