BACK TO ALL NEWS
Currently reading: 2018 BMW X4: new swept-back SUV sets sights on Evoque
UP NEXT
Prodrive P25 is uprated Subaru Impreza 22B with 400bhp

In a bid to close the gap to Land Rover's top-seller, the Mercedes GLC Coupé and Porsche Macan, BMW has reinvented its X4
Open gallery
Close

BMW is taking renewed aim at the Range Rover Evoque and a growing number of style-led premium-brand SUVs with its new second-generation the new BMW BMW X4 – which arrives just four years after the old model.

The original X4 SUV was introduced in 2014 but struggled to match the success of rivals such as the Range Rover Evoque and Porsche Macan. BMW is launching a new version now (and it's on show in Geneva) because of the arrival of a third generation of the X4’s sister car, the BMW X3. The two models are produced on the same production line at BMW’s US factory in Spartanburg.

UK sales books opened on the 14 February and the first UK deliveries are scheduled for 15 July. Prices start at £42,900, compared with £38,540 for the outgoing X4 range, which is indicative of the new model’s gentle shift upmarket.

BMW also claims the new X4 will take a big step forward in terms of handling and driving dynamics compared with its predecessor. 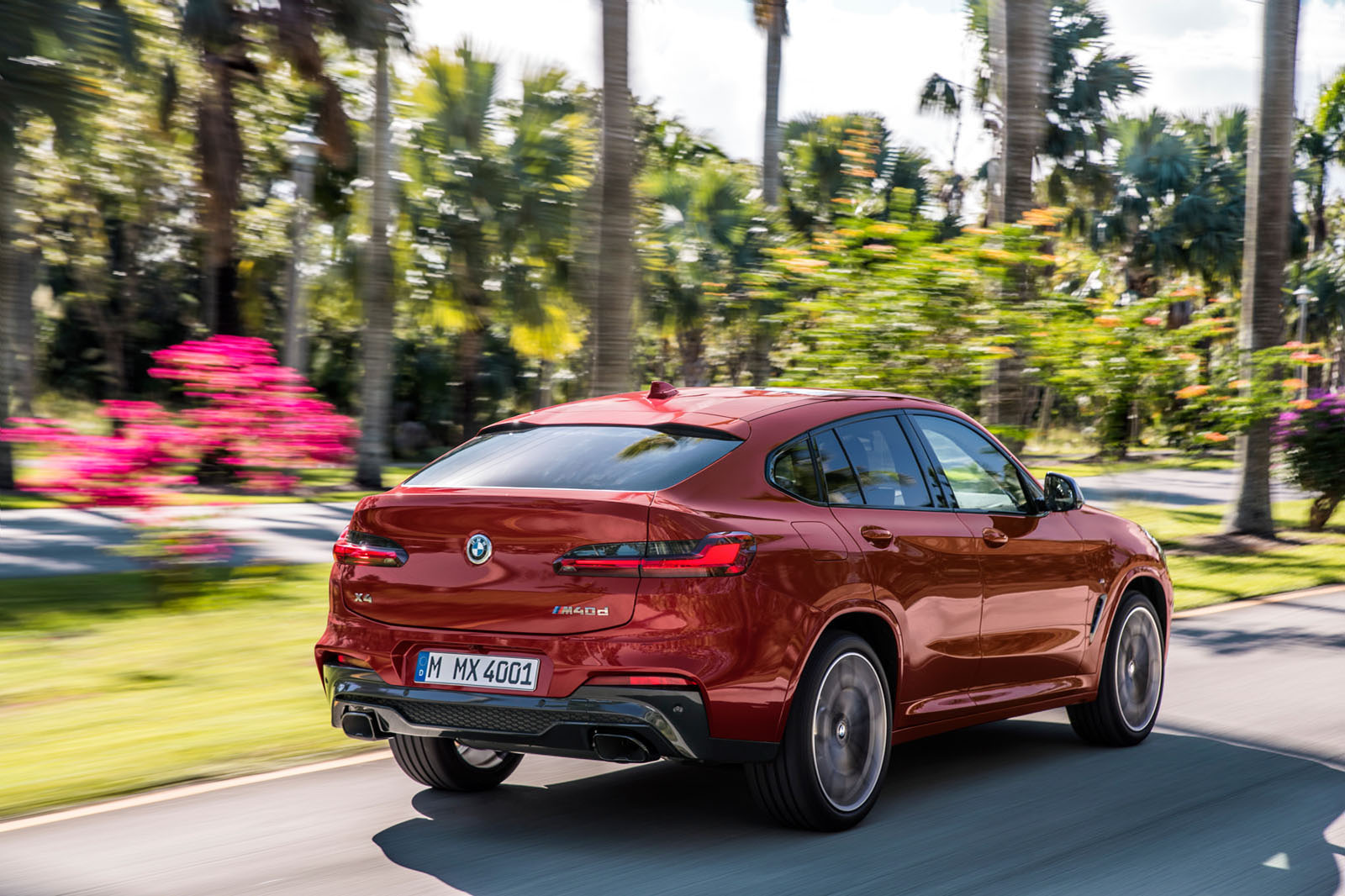 The new X4 will be launched with a choice of four longitudinally mounted engines: two four-cylinder petrol units and two four-cylinder diesel options. Two six-cylinder M Performance models will be introduced in the coming months.

The M Performance models will start with the M40i, which runs the latest evolution of BMW’s turbocharged 3.0-litre inline six-cylinder engine. It matches its predecessor by producing 360bhp but has an extra 25lb ft of torque (at 369lb ft) and can achieve 0-62mph in 4.8sec on its way to a governed top speed of 155mph. BMW claims 31.4mpg fuel economy and CO2 emissions of 209g/km. 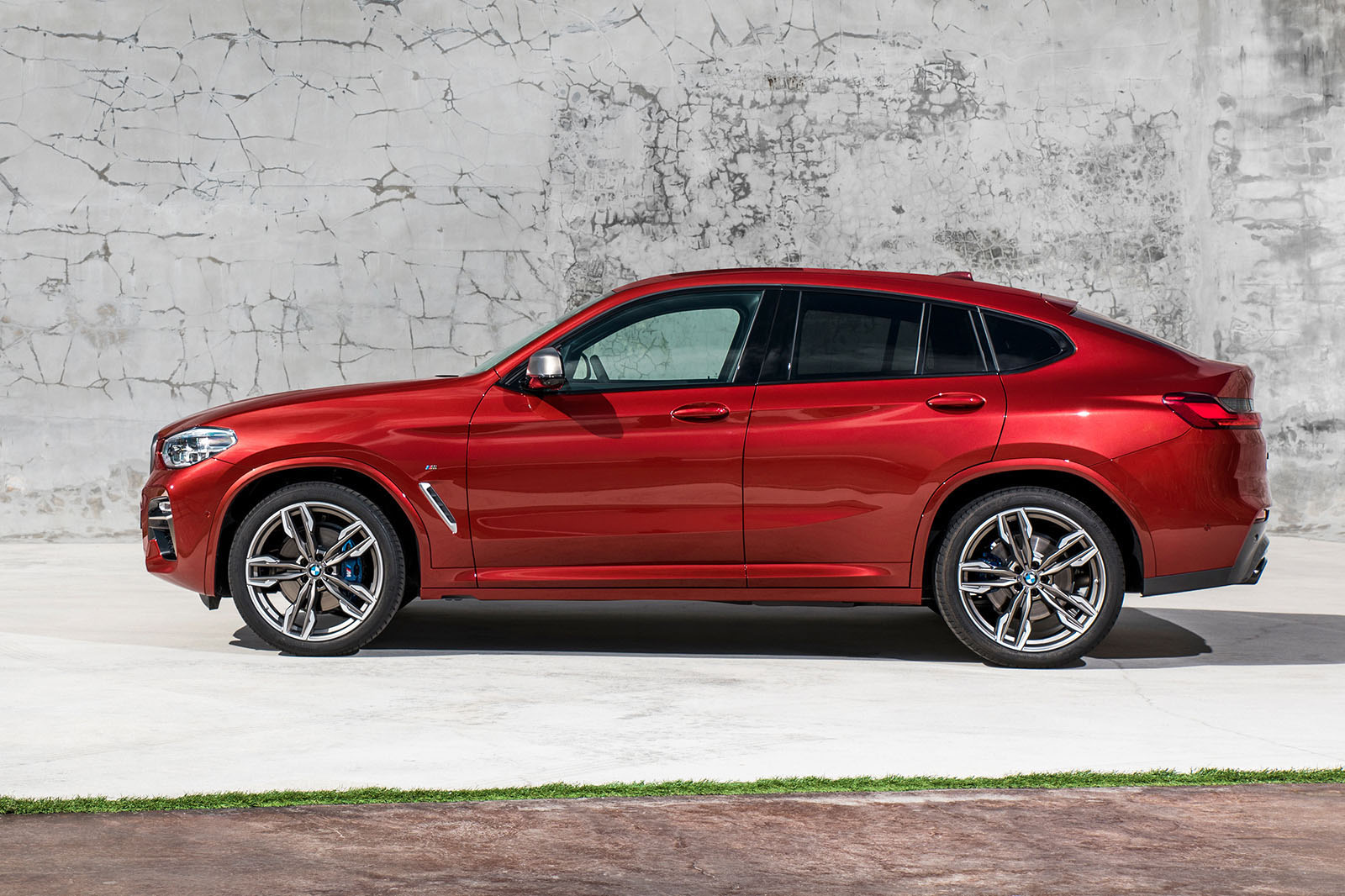 The X4, along with its X3 sibling, is based on BMW’s CLAR platform (first introduced on the latest BMW 7 Series). BMW says the platform’s extensive use of aluminium and highstrength steel makes the X4 more rigid than its predecessor and up to 50kg lighter. Despite that, the new model is bigger: it’s 81mm longer (at 4752mm) and 37mm wider (at 1918mm). A lower ride height contributes to a 3mm reduction in height (at 1621mm) and the wheelbase is 54mm longer (at 2864mm) than previously. BMW claims a perfect 50/50 front-to-rear weight distribution.

The interior of the X4 is shared with the X3. BMW says it has used higher-grade materials and the latest generation of switchgear with the aim of providing the new model with a more premium feel than the first X4. BMW also promises extra comfort through redesigned sport seats with added support.

The revamped interior also includes infotainment functions delivered via the latest evolution of BMW’s iDrive system, which operates through a standard 6.5in or optional 10.3in free-standing touchscreen display. It is linked to a traditional rotary controller between the seats but voice control (which, BMW says, recognises conversational commands) and gesture control systems are available as options.

The new X4’s longer wheelbase adds 27mm of rear leg room over the old car and boot capacity has increased by 25 litres to 525 litres. An optional cargo function allows the back rests of the standard 40/20/40 folding rear seats to be adjusted individually. When they are all folded, the car has a cargo capacity of 1430 litres.

As with the X3, the X4 comes as standard with an eight-speed torque-converter automatic gearbox. It has Steptronic control, with steering-wheel-mounted shift paddles on all but the xDrive20i and xDrive20d. 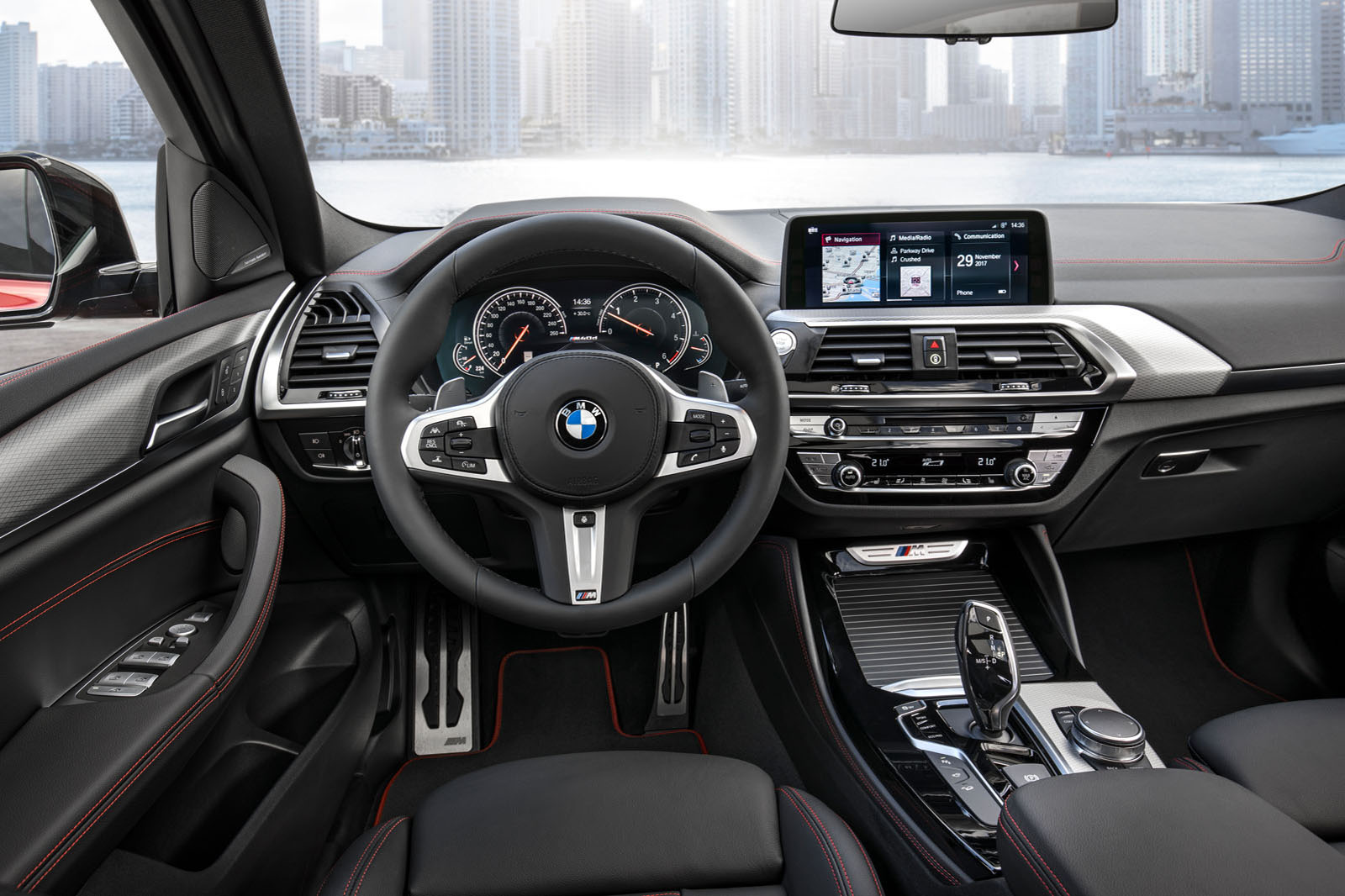 The automatic gearbox is allied to the latest version of BMW’s electronically controlled xDrive fourwheel-drive system, which is programmed to apportion drive with a rear-wheel bias. It operates in combination with a standard Performance Control function, which provides a torque-vectoring effect by varying the amount of drive sent to each individual rear wheel. Also included as standard is BMW’s Driving Experience Control system. This lets the driver choose between Sport, Comfort and Eco-Pro modes. Higher-spec models also have an extra mode called Sport Plus.

The X4 adopts new double-wishbone front suspension, also seen on the X3, that is claimed to offer a considerable reduction in unsprung masses compared with its predecessor. As standard, all models have M Sport suspension and speed sensitive electro-mechanical Servotronic steering. Wheel sizes range from 18in to 20in. The tyres on 20in wheels are 245/45 front and 275/40 rear.

Although the X4 has been developed primarily for onroad driving, BMW says it has also been engineered to handle mild off-road excursions, with a ground clearance of 204mm and a fording depth of 500mm together with break-over, approach and departure angles of 19.4deg, 25.7deg and 22.6deg respectively.

By comparison, the most basic Pure version of the smaller Evoque has 213mm of ground clearance, a fording depth of 500mm and breakover, approach and departure figures of 22.0deg, 23.2deg and 33.0deg. Like the Evoque, the new BMW also receives Hill Descent Control and Hill Start Assist systems as standard.

Opinion: Will this be second time lucky for the BMW X4? 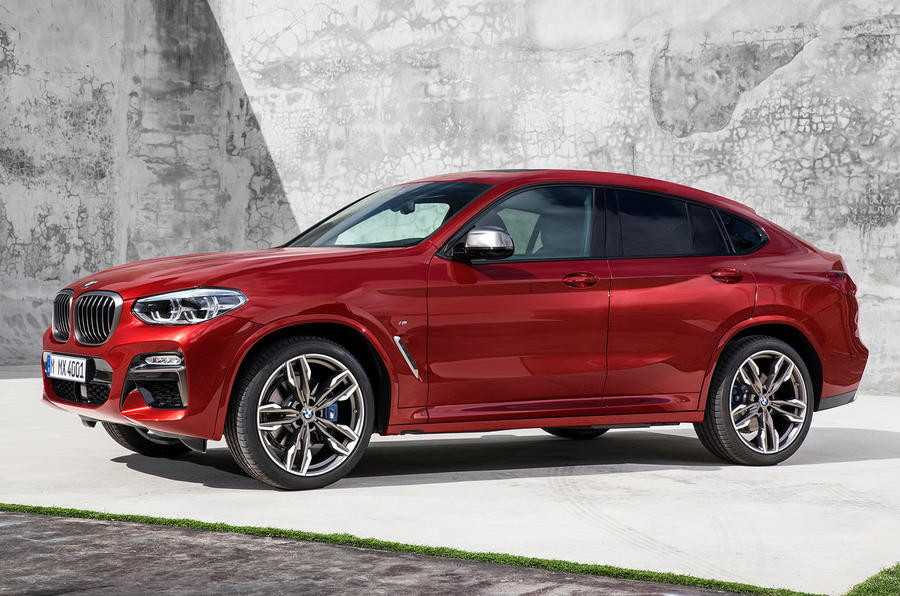 Although all SUV segments are booming, BMW X4, which has just been revealed in reinvented form, doesn't fall into such a clearly defined category.

Technically, its rivals range from the Volvo XC60 to the Range Rover Evoque, but its only true direct rival, which has similar coupé-styling and closely matched dimensions, is the Mercedes-Benz GLC Coupé that was launched last year.

Strictly speaking, the new X4 falls into the broader premium medium-sized SUV segment, which grew by 15.4% last year – a solid result although not as good as the 26% growth of 2016 – according to JATO.

Despite the segment growth, sales of the X4 slowed last year, no doubt affected heavily by the GLC Coupé. Global volume for the X4 dropped by 9.2% to 48,595 units. Those results are “quite negative, considering its age”, said JATO’s Felipe Munoz.

Although the X4 won’t ever hit those heights, given that it is more niche than its X3 sibling (which sold 139,457 units last year), BMW will hope this new X4 model reinvigorates sales, helping to combat the GLC Coupé’s success.

Range Rover Velar SVR due on roads this October with 542bhp

After reading some of the comments here I can only say that,yes it’s not particularly pretty, yes, it’s only built because other premium brands have one, yes, they all seem to look the same, and, yes, there are punters out there who just don’t care what it looks like as long as it’s got a badge on it they trust, whether it’s a good Car or not.

So now I'm going to have to put up with these barges outside our local school, alongside the Evoques, Velars, Cayennes, Merc Glcs etc.

I mean most of us absolutely hated the X6 when it came on the street. Each time I see one I get nausious and dislike it so much I will park whilst it goes away. We suffered the Bangelization period now we are to suffer the X file period. I will never ever buy ANY BMW as long as they annoy me with these aweful wheelbins on stilts