BACK TO ALL OPINION BLOGS
Currently reading: Matt Prior: Here come the modified Land Rover Discoverys
UP NEXT
Matt Prior: Car makers should prioritise profit not volume

The Jeep, Beetle and Mini have all had their turn, it's time for the 30-year-old Disco to steal some 'scene points'
Share
Open gallery
Close
Share story

What’s the most commonly modified car in the world, I wonder? Probably the Volkswagen Beetle, because people have been at it for half a century and there are millions of them. Maybe the Jeep Wrangler and its forebears?

Some Land Rovers are probably there or thereabouts. Old Series Landies get rebuilt in non-original fashion all the time, while newer Defenders get absurdly modded. The classic Range Rover game is pretty strong too. I quite like all of the above.

Anyway, I’ve got a hunch about what’s up next, the upcoming big thing in restoration and resto-modding: the first and second-generation Land Rover Discovery.

The Disco has been through its new phase, and then its slightly naff cheap phase, and through it all it has always been modified for serious off-roading, which gives it the level of authenticity people want.

So now, at 30, early cars have come the Second Earl Russell in London. out the other side of all of that and they’re ripe for a proper makeover. There are loads around, except early three-doors, and plenty are as cheap as chips. Coming to a heavily filtered Instagram page near you soon.

Re-watched the movie Baby Driver the other day, because it’s a terrific yarn and, better still, a film with cars in that doesn’t make me want to smack my head against a steering wheel. 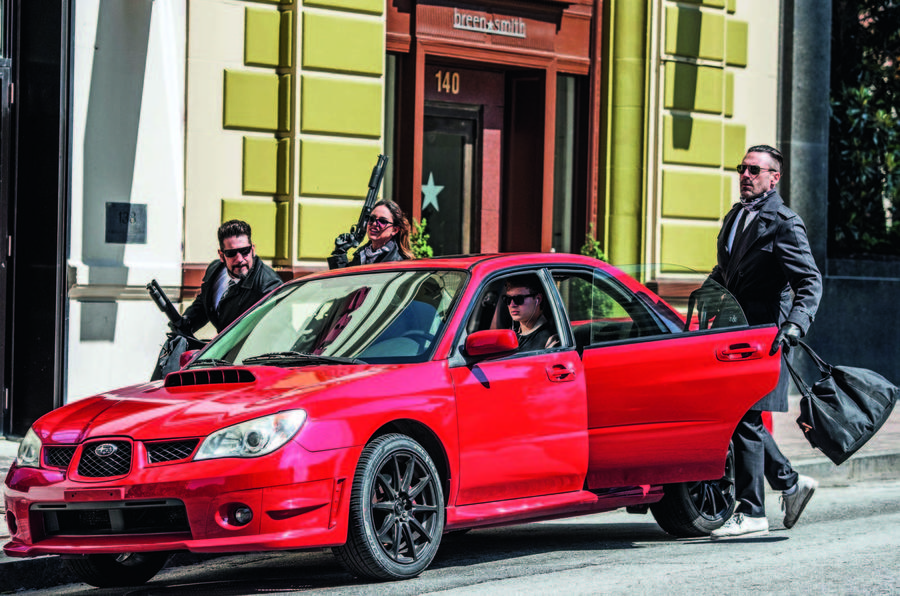 The first time I watched it I did worry for a moment (this isn’t a spoiler, by the way, it’s the opening scene). Our eponymous hero, Baby, who’s a getaway driver, puts his Subaru WRX into gear while waiting for a bank raid to take place. He slams the gearlever to the right, and backwards, and then waits for his compadres to get back into the car.

“But that’s not first gear,” you and I will think, because we know about this sort of thing.

Anyway, then the robbers climb aboard, Baby gives the WRX the beans and drops the clutch, and to the surprise of his passengers… the car sets off backwards, exactly like it should do. Lord love you writer/director Edgar Wright. Should never have doubted you for a second.

The problem is that films which include car chases so often don’t get it right. They don’t care about you or me, so they’ll have somebody changing down a gear, or putting their foot fully on the gas pedal halfway through a drag race, as if these drivers wouldn’t have thought about that already. “Oh no wonder he’s getting away. I set off in fourth!” There are so many bad car chases that it’s a shock to watch a good one.

I suspect GoPro and people wearing Red Bull-branded helmets haven’t helped the cause. We’re so used to seeing daredevils being actual daredevils that movie makers are turning the drama up to 11 to get our attention. Which means cars being chased by nuclear submarines or winning races backwards while their engine is on fire.

Thing is, this is just cars, which happens to be my specialist subject. What if you’re into something that filmmakers are bound to take liberties with, like aircraft, or firearms, or unarmed combat or law or police procedures or, most common of all, I imagine, computers?

16 August 2019
Aircraft, amazing how civilised it is in the back of a transport plane in most films, they can talk without raising their voices and even whisper so others don't hear. Understandable though, if done realistically there'd be little point as you'd struggle to hear the actor over the noise.

Baby driver is great but I still enjoy fast and furious films, though you have to switch off your brain and accept them for fun action films with cars and absolutely no reality what so ever.

16 August 2019
"So now, at 30, early cars have come the Second Earl Russell in London. out the other side of all of that and they’re ripe for a proper makeover."

Either there's some Cockney rhyming slang that I've never heard of before going on there, or that sentence has gone off the rails somewhere...

Neither, you need to further

Neither, you need to further your education. Try wiki.

WTF is going on?

Sad to say I know a little about the Earl but I'm struggling, really struggling to put what I know about him in the context of that sentence.

And then the article goes straight in to a story about a WRX Subaru  -  Autocar, WTF is going on with your website?  Designing a website is relatively straightforward and normally tested with all the popular browsers before being published. I think you need to have a word with whoever is in charge of IT because some of the articles of late make no sense whatsoever. It is possible to mix advertising with your reports but come on...  your website is stating to look like it was put together by a kid in their first year at high school. ( actually thinking about it, they'd do a better job ).

16 August 2019
...it's more that, like scotty5, I can't see what his relevance is in that sentence and the stray full stop makes it look like a mistake.

Nobody's perfect, least of all me, but a bit more proofreading might be in order.

The only modifed Discovery I wish to see, is the 'Discovery 5' with a modified rear.

A company already doing it...

From what I understand Liveridge 4x4, (http://www.liveridge4x4.com), will build you a better than new Disco as well as the fully refurbished Series Landies they do so well, perhaps you should go have a chat with them Matt?

I'm a website designer/developer and agree with Scotty5 too, "Autocar, WTF is going on with your website?" No spam protection on your comments, (something that's simple to sort out with Drupal), over-caching, (something that's stopped me even looking your slideshows), and so much more, a magazine of your stature deserves a far better website...