BACK TO ALL NEWS
Currently reading: Land Rover Discovery: driving the original 30 years on
UP NEXT
Next Mazda MX-5 to maintain driver focus with petrol power

Land Rover celebrated the Disco's 30th anniversary at Goodwood. We revisit the first one to see why it was such a hit
Share
Open gallery
Close
Share story

Developing new cars on the kind of budget that a German company would spend on a new dashboard has long been a speciality of the British motor industry. Many of these machines bomb, usually brought down by underfunded development programmes guaranteed to produce roulette wheel reliability, but some succeed despite such saddlings.

One of the more famous is the Land Rover Discovery, which began life in 1989 as a reclothed, cost-reduced Range Rover designed to sit between the ageing Defender and a Range Rover enjoying ever more success as it was pushed upmarket.

You didn’t need to look underneath the Discovery to see the similarities with the Range Rover. It shared the same windscreen and distinctively slim A-pillars, the same front door glass and much of its inner structure. But to avoid producing a vehicle of almost identical silhouette, the Discovery’s designers added a stepped roof – the raised rear section carrying slender lengths of glazing angled towards the sky. 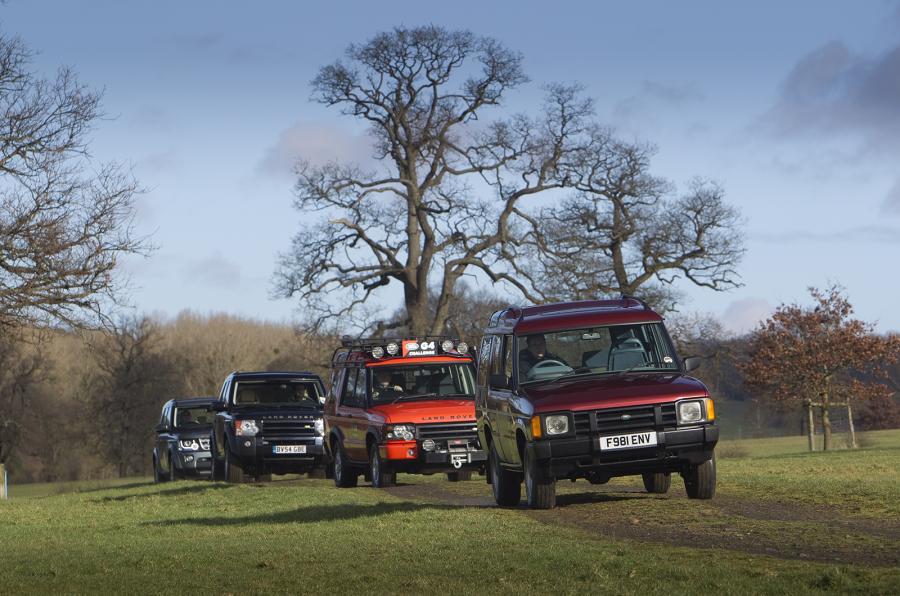 The tailgate was one piece and side-hinged rather than being split like the Range Rover’s, and most striking of all once you’d climbed inside was an unusual interior finished entirely in shades of pale blue.

This was the work of Conran Design, which was asked to develop an interior suitable for a vehicle bought as a lifestyle accessory. Slender storage racks were mounted above the windscreen, stretchable overhead nets provided carriers for pith helmets and water bottles, and a massive panic handle confronted the front seat passenger.

Even before you’d turned the key, it felt like you were having an adventure. There was even a small lifestyle accessory stowed within this big, four-wheeled lifestyle accessory – a detachable carry-bag made from the seat upholstery clipping to the Discovery’s centre console.

The Sonar Blue interior and an impractical three-door body only lightly limited the 1989 Discovery’s success, Land Rover’s latest being decidedly more glamorous than the Shogun and Trooper offered by Mitsubishi and Isuzu. It was better off road than either of these nevertheless accomplished Japanese competitors too. The engine choice was either Land Rover’s new direct-injection 200Tdi diesel or the 3.5-litre Rover V8 that had started life 28 years earlier as a General Motors Buick engine in the US.

Most buyers chose the diesel: its modest 111bhp was buttressed by a more promising 195lb ft of torque, all of this appearing at a helpfully low 1800rpm. And once you get over the mild shock of hearing what sounds like a truck engine setting Land Rover’s very first production Discovery all aquiver, it’s this stout pulling power that draws you along in pleasingly languid style. You have to work at it – the 200Tdi’s torque peak being more pointy than flat – but once momentum is gathered, the Discovery bowls and rolls along with comfortable authority. 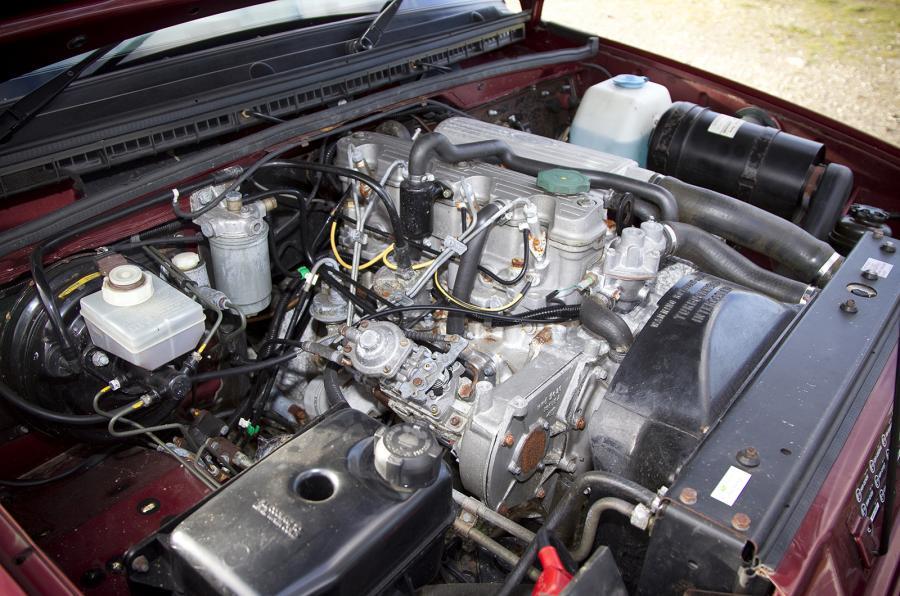 The roll comes when you shuffle the wheel of a low-geared steering system that’s remarkably cumbersome at manoeuvring speeds, but quickens at speed, when big movements produce big roll. But it doesn’t take long to compensate for this, nor the fact that you must stir the clunkily glutinous gearlever repeatedly to maintain a pace in cut-and-thrust conditions. None of which matters after a while: the airiness of this Disco, the way you look down from it towards the road below, its lightly heaving gait and the light snortings of its 2.5 four-pot diesel prove strangely restful. And no other car, now or then, provides the same in-cabin ambience of an original Discovery.

It’s not just the Sonar Blue hues either – it’s the airiness of the vast cabin, the feeling that you’re viewing the proceedings from a gallery and the robustly wrought details (that grab handle and the low-range gearlever knob among them), all contriving to make it feel adventurously different. 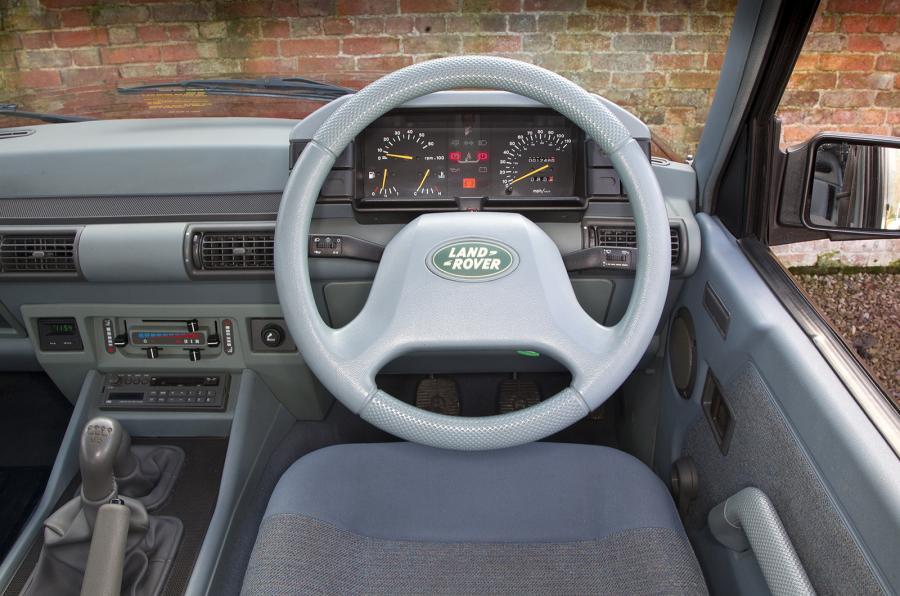 Such impressions are as keenly felt in the rear. The sheer height of the rear compartment, the surface area of glass and the comfortable commodious rear bench make this a great machine for the long distances that it conjures in your mind’s eye.

This was a cost-compromised car – any 1980s Rover nerd (who, me?) is able to expose the origins of its door handles, instruments, switchgear and tail-lights (Maestro van for the last, if you must know) – but it was one capable of taking its buyers, and makers, towards excitingly fresh terrain.

The 300 Tdi disco 1 late 90,s is a ledgend , awsome ride awsome reliability ... mines twin locked and lifted with decent suspension and fully decked out inside and out .I have owned many 4wd,s including toyotas but this 300 tdi has been my favourite , I take it bush on a regulaur basis in northern Australia chasing gold with my metal detector in both the wet and dry season and its never let me down and its a weapon off road , its as good as many and better than some when the going gets tough, mines got over 300,000 ks on it all the weak spots have been redone bigger uni,s new head gasket timing belt pulleys etc etc id happily head off into the tanami or gibson desert in it tommorow without a thought ....The 300 Tdi has long been touted to be one of Landrovers Best .... and i agree hands down ........

What a shame they've

What a shame they've developed it into such a munter.....

Doom mongers of the world unite.

Decent article about a point in British automotive history when some cunning engineers in Solihull turned a company around preserved the jobs of thousands.

Get over yourselves and accept the article for what it is.

Plus - I'd say someone has either preserved or restored the car in the photos, regardless of the brands failings people think they are worth saving. Try finding a Shogun or a Trooper from the same era.

Decent article about a point in British automotive history when some cunning engineers in Solihull turned a company around preserved the jobs of thousands.

Get over yourselves and accept the article for what it is.

Plus - I'd say someone has either preserved or restored the car in the photos, regardless of the brands failings people think they are worth saving. Try finding a Shogun or a Trooper from the same era.

More Pajeros than Discoverys from the 90s Down Under.