BACK TO ALL OPINION BLOGS
Currently reading: Matt Prior: an SUV with personality is the rarest of things
UP NEXT
Opinion: Why the Festival of the Unexceptional is an annual highlight

Character. Personality. Soul? Whatever: cars have attributes that make them feel the way they do. The Porsche 911 is the only sports car that feels like a Porsche 911. The Ford Ka – the original one – was the only city car with the vibrancy it had when it was launched. The Mk3 Toyota MR2 was, for me, more engaging than any Mazda MX-5 of the same era. Drive any one today and you will still feel it: character.

And this week, Jaguar proudly said that its new F-Pace SVR is the only car in its class to have a 5.0-litre V8 – and not just that, but with a supercharger, too. And it’s true. Any SVR Jaguar’s character – Project 7, Project 8, F-Pace, F-Type – is defined more than anything by that tremendously appealing (if not very efficient) big engine in its nose.

It defines a lot. The car’s general layout, of course, but also its driving characteristics. Longitudinally mounted and driving most of its power backwards, it gives a car that front-engined, rear-driven balance that I like so much, even when mated to asymmetrical four-wheel drive.

The amount of power and torque it produces pretty much obliges the use of a limited-slip differential. That the engine is big means the wheelbase is, typically, long. And the weights aren’t central, as they are in a mid-engined Ferrari, which changes direction much more quickly and willingly. In a Jaguar, masses are pushed towards the ends of the car, which makes for a bigger and lazier moment of inertia.

The weight in the nose would cause the car to push onwards into understeer in a corner in its steady state, but Jaguar’s engineers work on the dynamics to quell that a little – and the driver can help, too, by getting the entry speed right and trailing the brakes gently towards the apex, which keeps weight on the nose, gets purchase in the front tyres and eases off grip at the rear.

Then you get back on the throttle, the V8 makes a noise like thunder and the car gently starts to move around a little and straighten itself. It’s involving, engaging, alluring. It’s character. Personality. Yes, I’ll say it: soul.

What happens to this, then, I asked Ross Restell, Jaguar’s SV dynamics manager, when you lose the engine? Where does the character come from? 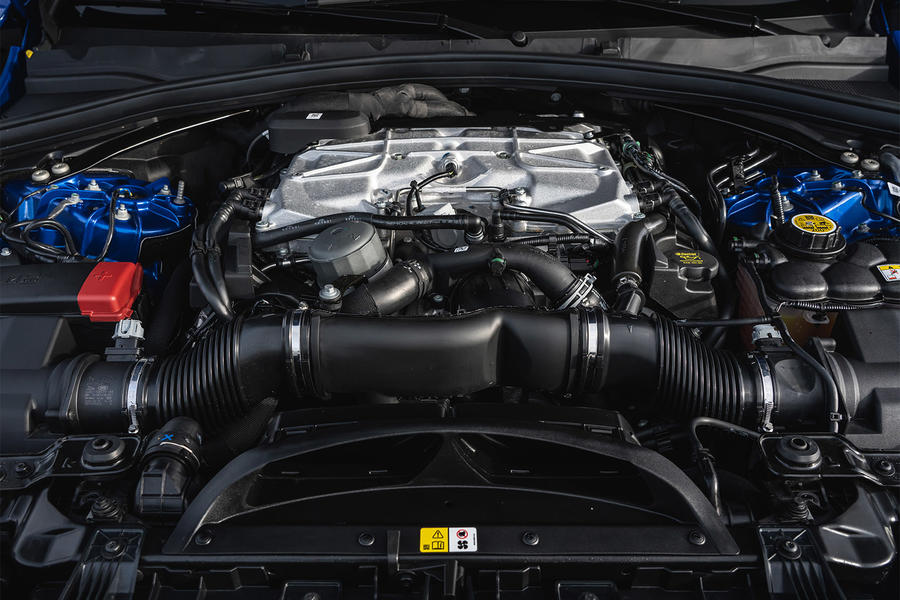 I’ve asked engineers this before and received an unknowing shrug, but not this time. Restell is excited about making newly electrified Jaguars even more engaging to drive. Yeah, I know, ‘he would say that’, but I’m inclined to believe it. A former Lotus engineer from the school of Beckers (Lotus ride and handling geniuses Matt, now at Aston Martin, and his late father, Roger), Restell is, I hope he won’t mind me saying, a damper nerd who loves making cars feel great to drive.

What he sees in an EV is the way its motors can produce power and put it anywhere it wants whenever it wants. A genuine opportunity. The page is blanker when he starts with it, and the unique character in a way a car drives can be engineered in.

Like most of us, Restell concedes we will lose something as engines disappear (although if there can be exemptions for some synthetically fuelled cars, some firms might keep them around). However, he thinks character won’t just be maintained but enhanced. Let’s hope. And in the meantime, that V8 is quite a thing.

Log in or register to post comments
rob26 21 March 2021
Why did Autocar put “Electric” out of the way on a different page? Is it so Matt can drool over V8 without it looking awkward and embarrassing next to pieces about BEVs and PHEVs by other writers who seem to have accepted that the World needs to move on and grow up a little? I mean does Autocar accept that global warming is happening? Do they thinks it’s made up? I drive a quite old Golf GTI, can’t afford to go BEV right now, but there’s no way on Earth I could buy a V8 SUV and look either my kids in the eye or myself in the mirror.
Has “Electric” been shunted off so no one has to grow up?
Blue Chill 23 March 2021

Eh? This is a bit of a misplaced and overwrought rant!

I've read plenty of articles in Autocar recently about BEVs, hybrids and the infrastructure needed to support them - they're hardly climate change deniers.

But this is clearly marked as an opinion piece, extolling the virtues of a charismatic car in - shock horror - a motoring website. I'd love a 911, or even a Cayman, but neither is practical enough for an only car. An M340i Touring ticks a lot of boxes, but it's also a near two-tonne car, much like many an SUV.

I've resisted the SUV craze as long as I can, but I'm getting spouse pressure and am f-ing fed up of not being able to see round the other SUVs when moving out of a parking space and the like. So I'm delighted that something like this exists, and gets the seal of approval from Autocar.

Also, taking lifetime environmental impact into account, the current crop of BEVs really aren't all that clean, and that's according to the manufacturers (Volvo/Polestar if memory serves).

Sure, 23mpg is pretty poor, but then so's the 28-ish mpg that the supposedly "MHEV" P400 F-Pace struggles to. And Jaguar's slightly odd pricing structure, standard spec lists and PCP deals actually make the SVR a bit of a bargain in comparison.

Too late, I already did. Expecting delivery around mid-May. Can't wait.

You'd have to have put up a better argument than you have so far to outweigh the points Matt has made in his articles.

Character, personality, soul. Three words that I would not associate with the driver of a V8 SUV.

289 19 March 2021
Hmmm, I disagree Matt. I think the lack of a proper engine will tear the heart out of cars for those who already have a drivers license, (agreed that for those yet to own a car there will be a different starting point or expectation).
I am down to just two V8 petrol engined vehicles (used to have four), but I wont be trading them in for an EV.
I think the EV is a one trick pony....the power is there (in some models), but that's it- the one trick! After you have made all your passengers feel sick with neck bending standing starts, what then, (and what has this done to the range too).
The thing about a V8 is the lazy power delivery which makes journeys so pleasurable and stress free. They don't have to be shouty like some JLR product - that can be quite wearing on a long journey. They just perform so well as an all rounder.
The individualism will be gone, and with it personal pride of choice of ownership....cars will be just another 'white good' separated by ever trickier fairy lights and gadgets to schmooze the tech geeks.
I fear that once the entertainment of the ICE engined car has gone, boredom will kick-in and drivers will spend even more time fiddling with the settings in the 'infotainment iPads nailed to the dash, causing monumental crashes
View all comments (5)