BACK TO ALL OPINION BLOGS
Currently reading: Why Leclerc must be prioritised at Ferrari
UP NEXT
Matt Prior: Why the M500 is a new hope for Noble

Why Leclerc must be prioritised at Ferrari

If things had worked out a little differently, Charles Leclerc could be taking Lewis Hamilton down to the wire in Abu Dhabi. In his first season at Ferrari, Leclerc has taken seven pole positions to Valtteri Bottas’s five, Hamilton’s four and Sebastian Vettel’s two.

He could and should have won race two in Bahrain, where the car let him down. In Monaco he was quickest in final practice but Ferrari banjaxed his race by not sending him out for a second Q1 run, which left him qualifying only 16th.

In Azerbaijan he was the stand-out before crashing in Q2 when Ferrari needlessly tried to get him through on a harder tyre. In Austria he took pole but was kept on the leash in the opening stint to maximise tyre life, which ultimately allowed Max Verstappen to pass him with two laps to go.

In Germany he had the car to win but, in keeping with others, Hamilton included, skated off on a treacherous surface. Belgium and Italy he won brilliantly, back-to-back. It should have been a hat-trick in Singapore where he started from pole and led, until Ferrari accidentally leap-frogged him with Vettel by stopping the four-time champion first to undercut Hamilton. And then failed to order a position reversal.

A week later, another win went west in Russia when Leclerc followed a pre-race plan to tow Vettel into the lead but Sebastian reneged on the deal to allow him back in front. A Virtual Safety Car period then handed Mercedes cheap pitstops and a one-two ahead of Charles.

Leclerc himself torpedoed a decent chance in Japan when the arrival of arch-rival Verstappen around his outside at Turn 1 prompted a red mist moment. Then, arguably conservative Ferrari strategy cost Leclerc in Mexico. Right there, 10 races Leclerc could have won from the first 19, instead of the two he actually claimed.

The pace is clearly there, and that’s Ferrari’s problem. Vettel is the senior statesman, a good guy, intelligent, with a wry sense of humour and a fine ambassador for the sport. He’s hard not to like.

But Eddie Irvine always told it like it is and has done so recently in an interview with an online gambling company. Vettel, Irvine says, is not a worthy four-time champion. He’s good but mistake-ridden. And Eddie doesn’t think he’s super-quick either, claiming that we saw that when he was bested by Daniel Ricciardo in 2014, and are seeing it again.

There were times this year when Vettel has not been sacrificed because of his status and Ferrari has lost races because of it. The intra-team rivalry had flashpoints in Monza, Singapore and Sochi and is becoming a problem. Team principal Mattia Binotto calls the ‘problem’ a luxury. But it’s one he could do without.

At the start of the season Ferrari announced that it would start off prioritising Vettel. It’s now time they did the reverse. The timing screen, ultimately, decides a team’s number one. 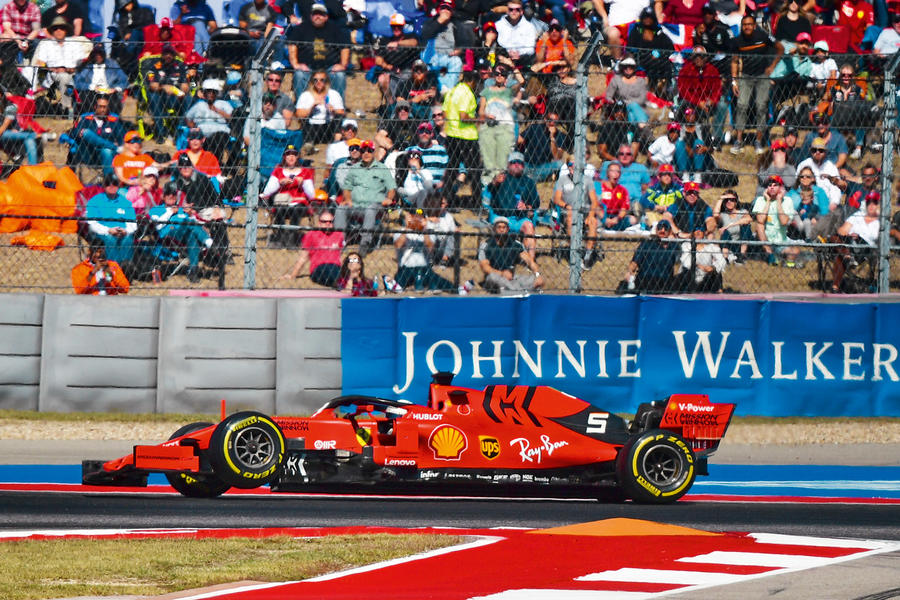 By design or coincidence?

Ferrari’s lacklustre performance in the US Grand Prix, after being bang on the pace ever since F1’s August break, prompted much muttering and speculation in the days and weeks that followed the Austin race.

Ferrari’s power unit has given the red cars a straightline speed advantage all season but, after a poor display at Budapest in August, Ferrari took a run of six straight pole positions only halted by Mercedes in the USA.

The Ferrari speed advantage has always been much more prevalent in qualifying than in races but, in Austin, Charles Leclerc finished more than 50sec behind the winning Mercedes, just as Ferrari had done in Budapest. It happened just a day after the FIA issued a Technical Directive (TD).

An intrinsic part of F1 is looking for exploitable loopholes in the regulations. If a team believes it has found one, it may seek to clear it with the FIA. The FIA will then pass an opinion that such a thing is legal, or refuse it. If it’s the latter, a TD is issued to all teams telling them of the inquiry and the reasons that it has been denied.

Prior to the US GP, Red Bull asked the FIA whether it would be okay to use electrical pulses to interfere with the FIA’s fuel flow device. The maximum fuel flow rate could be exceeded between measuring points so long as the average flow rate was within the regulations. That could give a power advantage and would fit with a scenario where this was witnessed over a shorter distance (a qualifying lap) but not significantly over a longer one (a race distance).

The FIA’s TD said that no, this would not be okay, and cited article 3.10.5, which says: “Any device, system or procedure the purpose and/or effect of which is to increase the flow rate or to store and recycle fuel after the measurement point, is prohibited.”

Sebastian Vettel’s Ferrari retired early in the US with a suspension problem and team principal Mattia Binotto said that Leclerc’s performance was compromised by having to revert to a previous, less powerful engine specification after a problem in practice, allied to tyre issues in the opening stint. Ferrari’s rivals – surprise, surprise – thought otherwise.

Excellent use of the word 'banjaxed' :)

No it doesn't, Peter Cavellini

Autocar isn't a F1 magazine/site or even a motorsport one. The specialist sites have lots of comments. All it proves is that if you post a "what if" article in a non-specialist site, then no one really cares, and it is a totally silly, fantasy article, which F1 fans hate.

There probably is a need to prioritise Le Clerc, but the far bigger priority is (a) to build a car that is at least as fast as the Mercedes for the races, not just testing and; (b) stop the stupid operational errors.

Every year, they are fastest in pre-season testing, and then in Melbourne are nowhere. And then, they always compound it with regular strategy blunders and component failures. Mercedes have the odd failure and the odd strategy mistake. Red Bull never seem to get the strategy wrong.

They also need to start out-developing Red Bull, who have come from nowhere since they changed to the Honda engine, and with Verstappen, are winning regularly.

But fantasy articles saying that if they had done, this, that and the other differently, then Le Clerc would be fighting with Hamilton is nonsense, because it assumes that Hamilton and Mercedes would have made the same mistakes etc as they did.

If you fantasise about one team being better then you cannot ignore the other teams, and if you do that, then next you will be saying that Williams could be fighting Hamilton for the title with Kubica!

Yes, there are dedicated web sites for F1 fans, but the occasional foray on Autocars is still car relevant,and, some Autocar readers are F1 fans too, I'm giving an opinion on what the journo wrote, whether I'm correct or not, and I'm happy to read others comments too.

Two days this article has been up, three posts, two now mine, that's how interesting F1 seems to be in the U.K even when it's a Brit that's won it for the last few years.....