8
Want a fast executive saloon but don't want to shout about it? Volvo's new S60 T8 could be for you. We try it in the UK for the first time
Open gallery
Close

Volvo’s very modernist approach to the performance saloon format. And it will be a direction that the established elite in that segment have to follow as the electrification ramp-up marches on.

This is Volvo’s fastest-accelerating production car, but it does things a little differently to the Germans. That’s why this T8-badged S60 gets no big wing, no flared arches, no giant air intakes and no shouty, quad-tipped exhaust to announce its presence.

That may cause some to lose interest already. And probably for the best: Volvo isn’t aiming to beat the BMW M340i at its own game here - it’s aiming for a more reserved customer less inclined to make a big song and dance about their car's power and pace.

We’re plenty familiar with the concept of Volvo’s ‘Twin Engine’ T8 system, which has proven its worth in the 90 series models and the XC60 to date. But for the uninitiated, here goes: it’s got a 2.0-litre four-cylinder petrol engine that is both turbocharged and supercharged, but it’s also a plug-in hybrid, supplemented by an 86bhp electric motor driving the rear axle for all-wheel drive. It funnels all the propulsion sources through an eight-speed automatic gearbox.

If that all sounds terribly complicated, well, it kind of is. For 2019, the T8 powertrain gets a slightly bigger 11.8kWh lithium ion battery pack, with Volvo claiming up to 30 miles is possible on electric power alone. 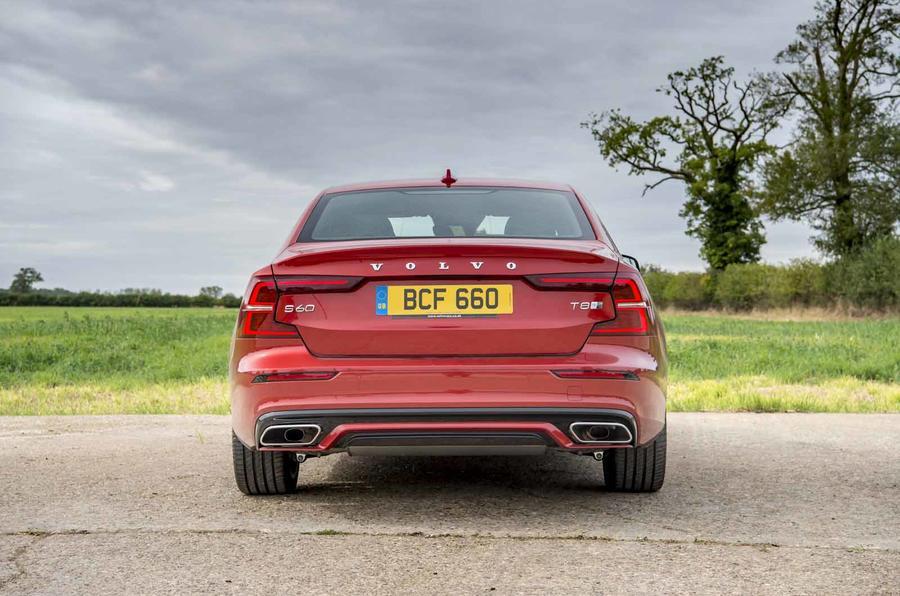 A darn sight easier to get on with than its complicated powertrain suggests. Like most PHEVs these days, there’s no need to ensure you’re in the right mode - just fire it up, off you go and the systems deal with the fine art of juggling the power sources as efficiently as possible.

Of course, there are modes if you want them: one that locks the electric motor on for permanent four-wheel drive, an Eco mode for extra fuel-sipping at the expense of responses, and a Power mode that does exactly the opposite. You can also charge up the battery by shutting down the electric motors entirely, if you need to. But we found the standard Hybrid mode to be the most balanced for most situations.

Volvo has had several years of (under Geely ownership) well-funded development time for its plug-in powertrains, and it shows. In town or country pootling, it’s as delightfully smooth and serene as a pure EV, and when the engine is fired up, it does so almost imperceptibly unless you stomp inelegantly on the throttle. It’ll shoot up to 78mph in pure-EV mode, but that requires precision with the right foot as it’s easier to wake the engine in the S60 T8 than it is in the new BMW 330e.

“But I thought you said this was a performance saloon?” I hear you cry. Oh, it is, on paper at least. Volvo’s T8 system still has a clear edge over (admittedly cheaper) rivals like the 330e and Mercedes C300e for straight-line pace, and in the S60 that means 0-62mph is dealt with in 4.6sec. It feels quick pretty much everywhere, but it doesn’t always respond with the satisfying surge exactly when you want it to: mashing the throttle without warning in Hybrid mode can mean a crucial second or so before the system wakes from its eco-friendly slumber.

When you do, the motor’s four-cylinder note is pleasingly distant up until the final 1500rpm of the rev counter, where a slightly industrial but not entirely unwelcome intrusion makes itself heard. None of this will be news to anyone who’s driven a Volvo T8 before, but what makes this S60 unique is that it has a chassis more capable of dealing with the performance.

Volvo claims that the S60’s suspension tune is distinctly different from that of its Volvo V60 sibling because those buying into the shrinking saloon segment are increasingly enthusiasts put off by SUVs. Happily, the sportier set-up provides a good (if not outstanding) balance between dynamism and comfort.

Where an S90 T8 might pitch, wobble and generally feel out of step with the road surface in spirited driving, the S60’s trade in outright softness results in greater composure and confidence-boosting precision. The steering seems quicker and more positive than other Volvos, too, without becoming too darty under gentle cruising.

It not perfect: there’s still an artificial feel to the helm that never really goes away and, while the T8’s cornering balance is entirely neutral, don’t mistake composure for fun, as there isn’t a huge amount. There is a modest trade in ride comfort, with effortless absorption making way for a feeling of being a little more connected to the Tarmac, but on our car with 19in wheels it’s entirely acceptable and doesn’t impact on the S60’s everyday abilities in the way the set-up of true performance saloons often does. 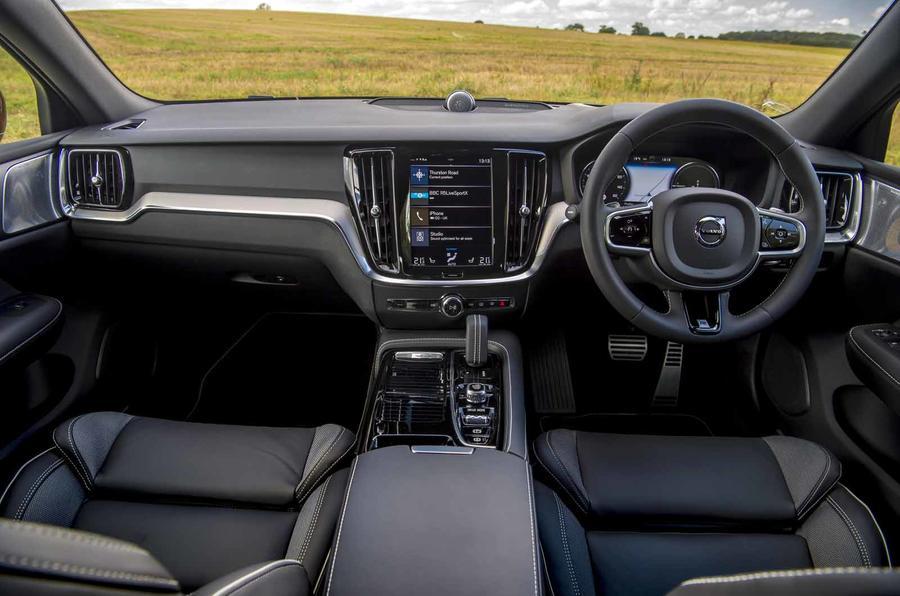 That depends on what you want. A BMW M or Mercedes-AMG killer this isn’t: despite Volvo’s efforts, it’s still too soft and hamstrung by the considerable weight of all the hybrid gubbins.

That’s where the clever Öhlins dampers of the soon-to-come Polestar Engineered model will come in. For now, the S60 is refined, quick, composed and comfortable but doesn’t set out to be a rewarding driver’s car in the traditional sense.

The powertrain, too, is versatile and effective rather than thrill-a-minute. But there’s no questioning its capability - someone with the ability to keep the car’s charge topped up at home or at work can benefit from vastly better fuel consumption and smoothness than pure-petrol equivalents but still rely on serious pace when called upon.

And, being a Volvo, you get an impeccably finished and elegantly laid-out cabin and space for four large adults to sit without much complaint. Plus, it’s arguably a looker - even more so than its larger siblings, we reckon. A closer test of plug-in equivalents will give us a better idea of where the S60 sits, but first impressions are certainly positive. 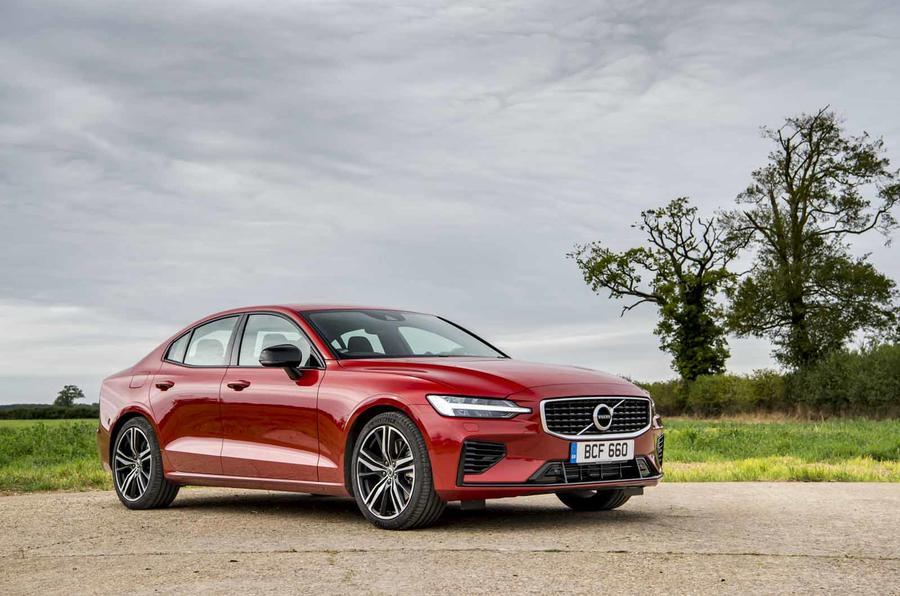 A lot of recent hybrids

A lot of recent hybrids actually have a disadvantage certainly in the UK tax regime company car market, that Mitsubishi has yet again played a blinder on.

As a way of reimbursing both electric and fossil fuel consumption, many companies are paying their driver 'advisory fuel rates' set by HMRC.For petrol hybrids up to 2L such as S60, XC50, new XC40 that is only 14p a mile, barely break even if you manage 40mpg.Mitsubishi went from 2L to 2.4L on the last PHEV update, whilst increasing capacity they also got more efficiency too but an 'over 2.0L' is repaid currently at 21p per mile meaning drivers making a tidy profit for every company mile they drive as even the most lead footed will do way better than 26mpg the break even point.

I'll have a 6 year old 2nd hand one please

"2.0-litre four-cylinder petrol engine that is both turbocharged and supercharged, but it’s also a plug-in hybrid, supplemented by an 86bhp electric motor driving the rear axle for all-wheel drive."

"2.0-litre four-cylinder petrol engine that is both turbocharged and supercharged, but it’s also a plug-in hybrid, supplemented by an 86bhp electric motor driving the rear axle for all-wheel drive."

Takeitslowly any opinions you care to share on other opinions

The sad thing about Volvo’s success

Is that every time they produce another cracking car you are reminded how much we miss SAAB.