8
Is this uncomplicated city car a refreshing antidote to complex, bloated alternatives or too basic for its own good?
Open gallery
Close

Why no electrification at all in the all-new Toyota Aygo X, you may ask. It’s a mercifully simple answer: weight.

Even something as minor as a mild hybrid would force Toyota to abandon the fundamental concept around the Toyota Aygo, leading to increases in size and cost. As for a full-on EV version, that would add “about 500kg” to the Aygo’s base 965kg kerb weight, according to Stijn Peeters, senior project manager for R&D at Toyota Motor Europe.

So it is that we’re greeted with a 1.0-litre nat asp petrol triple in a remarkably simple package. The new Aygo is heavily based, to the tune of a 50% component share, on the larger Toyota Yaris’s GA-B platform but, thanks to the lack of hybrid bits, with much shorter overhangs. Overall, it’s 3700mm long, so bang on the money for the Hyundai i10 but slightly longer than the Volkswagen Up.

The Aygo is a city car pure and simple, albeit with 2022’s must-have accessory of crossover-ish styling. As a result, you sit higher (55mm to be precise) so urban traffic is easier to navigate. The view out is helped by the raked-back A-pillar, while the dashboard is dominated by the 9.0in touchscreen. Physical buttons control the temperature. 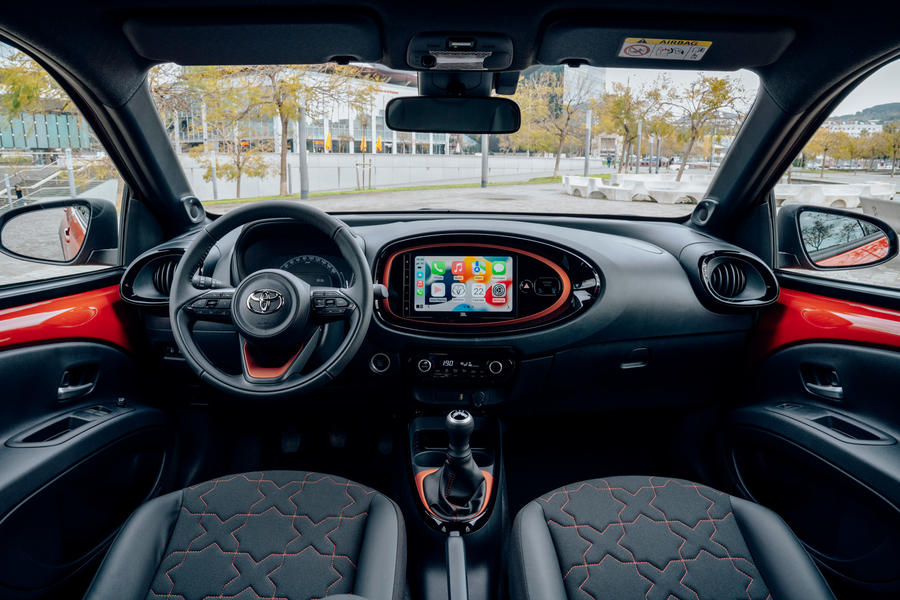 Up front is by far the best place to be in the Aygo, because rear-seat space is tight, not helped by the chunky front seats. Leg room is okay-ish, but head room is restricted, particularly if you opt for the retractable canvas roof. And the chunky C-pillar brings on an onset of seasonal affective disorder, even in the sunshine of Barcelona.

The Aygo gets an impressive list of standard safety, covering everything from pre-collision system to intelligent adaptive cruise control and automatic high beam assist. 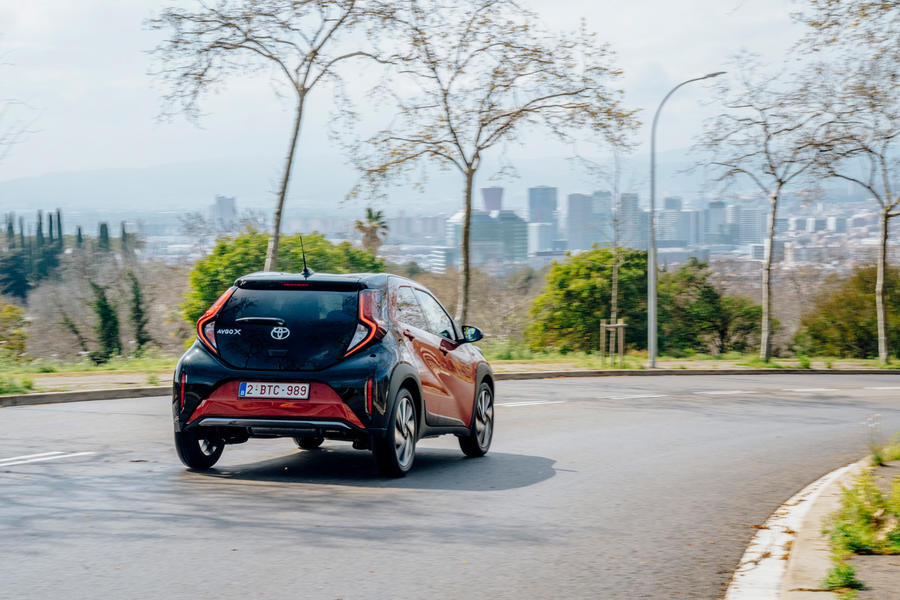 We tried the CVT gearbox, which gives a 0-62mph time of 14.8sec, 0.1sec up on the manual. So it’s no rocketship, but on a steady throttle and in the lower rev range, the engine is a refined little thing. You get more noise from passing traffic than anything else.

Or at least you do until you want to accelerate. At that point, all the CVT’s foibles come to bear with a 6000rpm triple for accompaniment.

You’ll be better off in the manual, which has a lovely short throw and where it’s easier to control the engine boom. The car is more than capable of motorway pace but long uphill drags test its 69lb ft of torque.

To drive, the Aygo X feels remarkably grown up. The steering is predictable and it’s an easy car to place on the road.

You can feel the car's lack of weight in the ride quality. There’s a beautiful simplicity to the way it absorbs urban potholes, despite coming on 18in alloys. Mid-corner ridges taken at speed aren’t as relaxing, because the higher centre of gravity induces quite a bit of body roll. 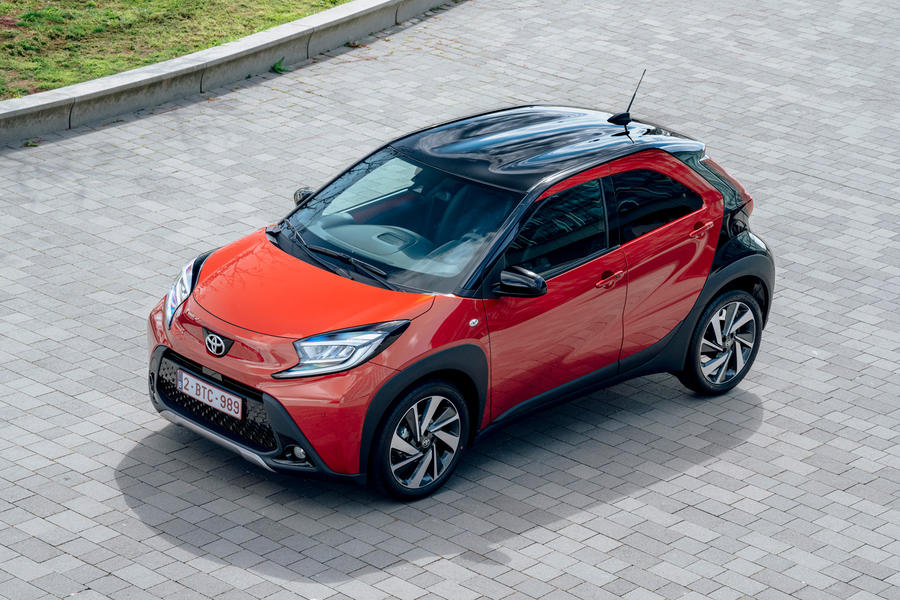 Back in 2005, Toyota needed to go into co-development with Peugeot and Citroën to make the economics of a city car work. Scroll forward to 2022 and it’s all on its own thanks to the economies of scale it’s achieved by sharing the Yaris platform, not only in design but also production - because the cars go down the same line.

Despite all the doom-mongering around this class, Toyota insists the Aygo X is a profitable car.

At the risk of sounding outdated, long may it continue. Electrification is definitely the future, but there’s something appealing about such a simple package like the Aygo X. It’s not without its faults - the rear room and CVT ’box being the main ones - but the purity of the concept and the lack of weight are refreshing in an era of ever more complex solutions.

If you need a simple runaround, this is definitely one of the better solutions.

Log in or register to post comments
gavsmit 31 March 2022
"Uncomplicated."
"Even something as minor as a mild hybrid would force Toyota to abandon the fundamental concept around the Aygo, leading to increases in size and cost."
"So it is that we’re greeted with a 1.0-litre nat asp petrol triple in a remarkably simple package."
"If you need a simple runaround, this is definitely one of the better solutions."
.....I'm still struggling to see the justification for the ludicrous £18,825 price tag.
Paul Dalgarno 31 March 2022

I'm not surprised it's profitable. £15k minimum. What a joke, I thought it would start at just below £10k...

Certainly styling wise a big improvement over the existing Aygo,the interior seems fairly stark but contemporary, perhaps it's closest competitor is the Suzuki Ignis which might have more interior room and the option of All Wheel Drive as well. I'd think that Stellantis will regret not going with Toyota to produce a successor to the 108/C1 and have an entry level model for product range