From £9,9156
Fiat eases into the world of electrification with a new mild-hybrid version of the 500 city car. We put it to the test
Open gallery
Close

It is incredible to think that the reborn Fiat 500's existence now spans three decades.

It’s with a mild sense of incredulity that, in 2020, we’re still writing about what is essentially the same car that was launched all the way back in 2007. Sure, there was a midlife facelift back in 2015, and the engine line-up has changed slightly over the course of its 13-year lifetime, but even so it doesn’t seem inaccurate to say that the modern 500 is now quite an old car.

The reason that the little 500 is appearing here yet again is because Fiat has decided to electrify it. Well, electrify it a little bit. We won’t see the fully-electric 500e until its breaks cover at the Geneva show later this year, so for now this 500 Mild Hybrid - along with the new Panda Mild Hybrid - represents the vanguard of FCA’s electrification programme.

Take the 'mild' part of that name seriously, though. This isn’t a 500 that can run for brief periods of time on electricity alone - not that that’s stopped Fiat from marketing it as the 500 Hybrid in Europe anyway. Bit cheeky, that.

Here, the 500’s 1.0-litre, three-cylinder motor has been paired with a 12-volt belt-integrated starter generator (BSG) and a seperate 11Ah lithium battery - all of which develops a mighty 69bhp and 68lb ft. Like many mild hybrids we’ve seen before, the BSG harvests energy during braking and deceleration and stores it in the battery so that it can then be used to aid acceleration, or power the car’s auxiliaries when the petrol engine switches off when you’re waiting at the lights.

Usually these systems contribute to fairly minor reductions in fuel use and CO2 emissions, and can generally come across as a bit of a cynical response to ever increasing legislative pressure to make cars cleaner and greener. It’s tricky to shake that cynicism here too - though for what it’s worth Fiat reckons the new 12v architecture contributes to a 30% reduction in CO2 over the old 1.2-litre four-pot. 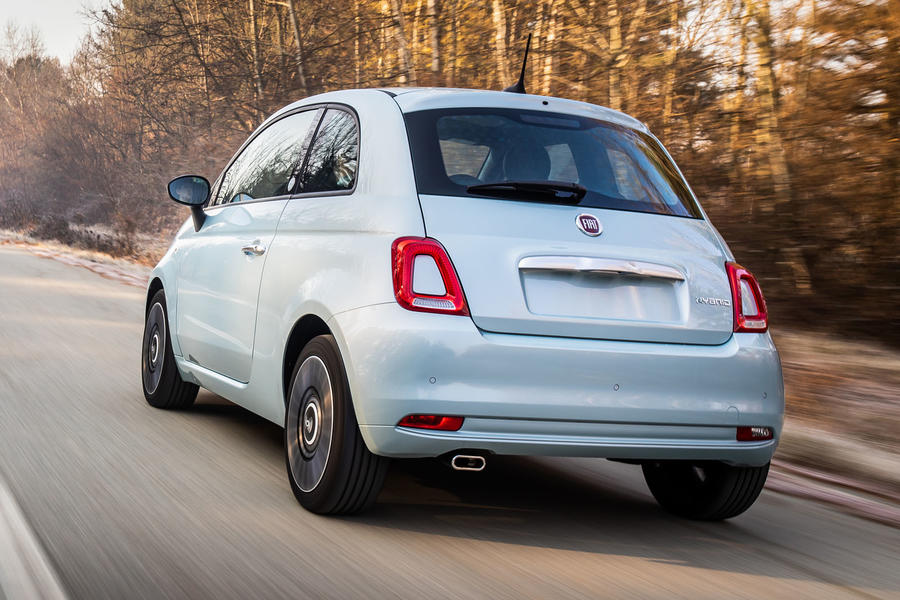 In hectic, stop-start Turin traffic the extra assistance provided by the diminutive electric motor is only just discernible, but is welcome nonetheless. Coupled with sensibly-weighted pedals and a light - if a little slushy - manual gear change, the process of getting the naturally-aspirated 500 Mild Hybrid off the line smoothly is a doddle.

Progress from there on in isn’t rapid, though, and you really need to thrash the engine in order to make meaningful progress. So it’s a good thing it seems pretty content with the idea of being revved out, and the noise it makes on an open throttle isn’t too bad either. The 500 has been criticised in the past for being a bit noisy under load, and next to the likes of the Volkswagen Up is probably still a bit on the loud side. But it’s hardly deafening, and is unlikely to dissuade anyone who’s sold on the looks to make a quick exit from their local Fiat dealer.

The same probably applies to its ride and handling. The Volkswagen Group cars are more well-rounded and polished next to the at-times lumpy 500, but it’s still a strangely endearing car to drive. The steering is a bit vague and entirely lacking in feel, body roll is relatively pronounced and front-end grip far from limitless - but the fact remains that the Fiat feels like it’s trying really hard to impress you. And to be honest, this eager-to-please character does go some way to helping you at least partially forgive some of its more obvious dynamic flaws.

The cabin feels as style-driven as ever, with seats upholstered in material fashioned out of recycled plastic providing a fitting nod to the 500’s new eco-credentials. The driving position is still pretty terrible, mind: a lack of adjustability in the seat base means taller drivers sit very close to the roof and bent-legged over the pedals. 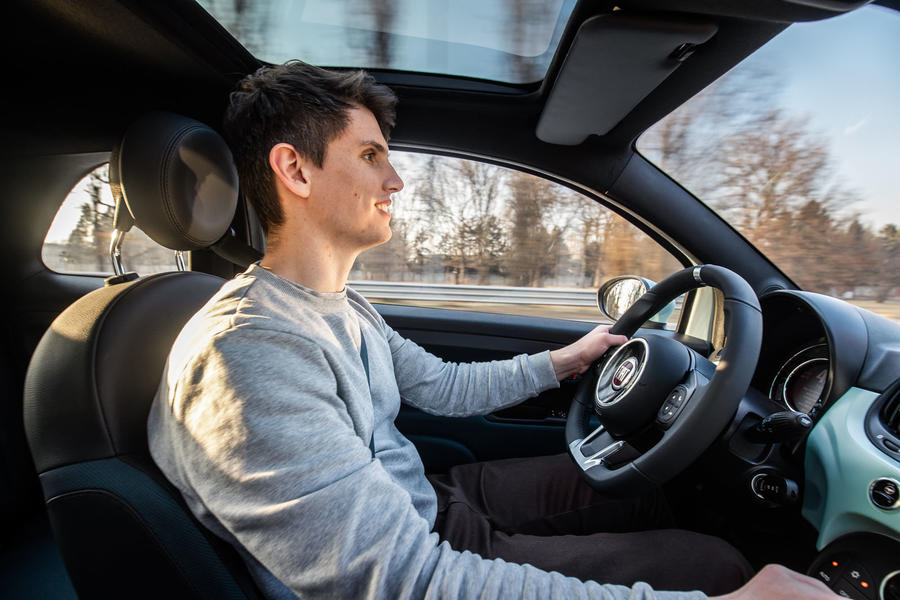 Well, if you’re sold on the idea of Fiat 500 ownership you don’t really have a choice. From now on every new 500 that Fiat makes will only be available with this new mild-hybrid powertrain - at least until the 500e goes on sale anyway.

Prices for the 500 Mild Hybrid start at £12,665 and move up to £16,795 for our range-topping Launch Edition model, which is about what you’d expect for a car of this size. But with all-electric versions of the Skoda Citigo starting around the same price point as this flagship 500, it’s tempting to just shun the concept of the ICE city car altogether. 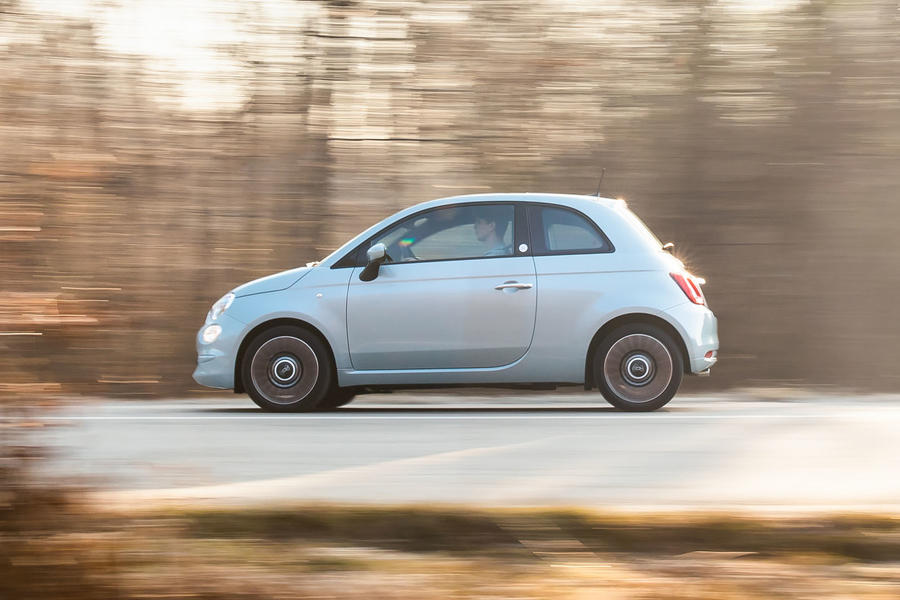 Does this replace the Twinair? I sure hope not - fabulous and very advanced engine, which suited the car to perfection. Surely they're not putting it out ot pasture...

Does this replace the Twinair? I sure hope not - fabulous and very advanced engine, which suited the car to perfection. Surely they're not putting it out ot pasture...

Well the should I buy one part of the review states this is the only available engine choice.

Wonder if it will beat the

Wonder if it will beat the old twinair for emissions? The 85bhp version had 92g/km with the 105bhp having 99g/km, both had superior performance though you did have to drive carefully to get good economy, which normal users can achieve, road testers seem to like thrashing them.
This is a replacement for the 1.2 and has similar performance but the twinairs are gone now by the sound of it.
MrJ 5 February 2020

I drove a pre-hybrid 500 Southwold to Yorkshire return one weekend.

Nice drive, and the size was fine for my six foot-plus frame.

One thing - I switched off the stop-start, as it made steep and slow Dales manoeuvres a pain.