From £17,2658
Share review
Scala undercuts rivals on price and ushers in a sharp new design language for Skoda, but success will hinge on it exhibiting the brand's traditional core values
Share
Open gallery
Close

The Scala is a big play from Skoda: a Focus-sized, Golf-shaped family hatchback that slots slap-bang into the two-box mould of Europe’s most popular segment.

The brand has actually been here before, but the old Rapid looked achingly bland, and rather than borrowing VW Group’s MQB platform, its underpinnings were shared with the Fabia, with the same basic torsion beam rear axle.

The Scala now benefits from the more sophisticated MQB, though because Skoda equips only its more powerful models with expensive multi-link rear suspension, there’s still a good ol' torsion beam at the back. A mistake? We'll see. Up front it's a typical MacPherson strut set-up, and while we’re at it, Skoda is building only five-door bodies for the Scala and, for now, they’ll all be front-driven.

But this car is also meant to represent a new high watermark for Skoda’s design language, which is why it gets scrolling rear indicators (on top-spec SE L trim), LED head and tail lights (fully, but again only if you pay more for SE L), and a Porsche-style ‘SKODA’ written across its bootlid. Sharp creases abound, as does the dark exterior surfacing that has become increasingly fashionable among the European brands. In fact, in the tightly defined world of mass-produced cars, the Scala is impressively faithful to the Vision RS concept, so credit is due for that.

The engine line-up comprises a selection of VW Group’s transversely mounted TDI and TSI units, all of either three or four cylinders. A 1.0-litre three-cylinder petrol is available with 94bhp or 113bhp, while the four-cylinder 1.5-litre TSI driven here tops the range with 148bhp. The only diesel is a 1.6-litre with 114bhp, and depending on which engine you choose, Skoda is offering either five or six-speed manual gearboxes or a seven-speed dual-clutcher. A 1.0-litre 89bhp version powered by natural gas is due at the end of 2019, though whether or not it will be offered in the UK is unknown. 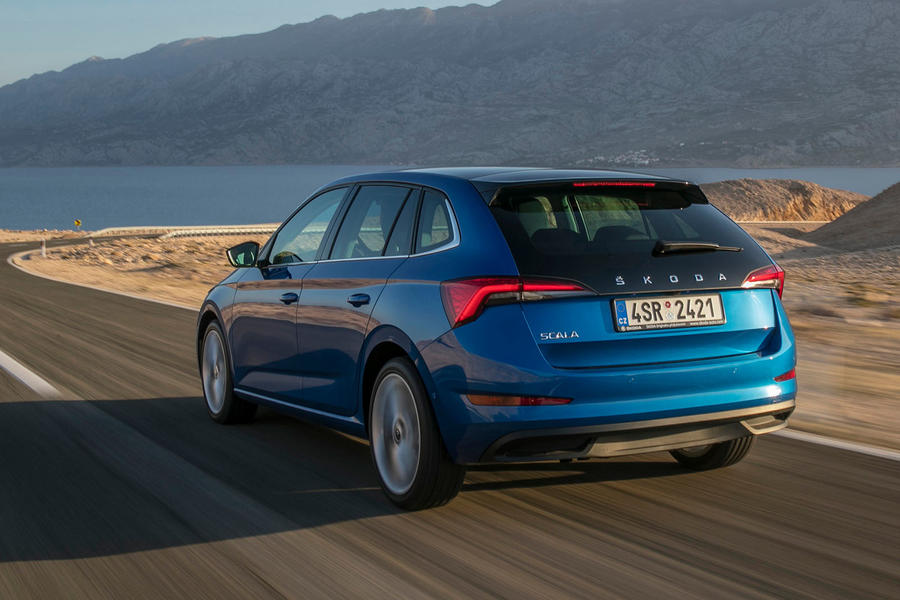 Slide into the Scala and there are plenty of reminders these cars are built to a cost. The window switches are clearly old stock from the VW parts bin, and there’s a degree of play in the buttons on the transmission tunnel that’s just a little too pronounced. You get a proper, old-school handbrake (a good thing, perhaps) and almost every surface below chest-height is made of the scratchy, textured plastic that’s been chased almost entirely from the Scala’s posher cousins.

Not that any of this should be considered a deal-breaker. For the money Skoda asks for the Scala – just £16,595 for the entry-level 1.0 S – this is a nice cabin, with a thoughtful design and very strong ergonomics. The dashboard has a fair bit of interest to it and mirrors the Scala’s rakish new face, and our test car’s red pinstripes give the place a lift. Neither is it difficult to find a good driving position. Visibility is also excellent thanks to substantial C-pillar cut-outs, and the optional 9.2in (and commendably crisp) central display of our test car is mounted usefully high – in line with the optional digital instrument binnacle. In short it’s spacious, comfortable and unpretentious, and very Skoda.

Exceptionally spacious, in fact, not least because this is a long wheelbase for the class – 10cm longer even than a Golf. You’ll get a six-foot passenger sitting behind a similarly tall driver without issue, and rear headroom is unusually generous, even with the optional, full-length panoramic roof. Unless you’re in the middle seat, that is; here both the seat base and back protrude awkwardly, and so it’s a berth best left for children.

In truth, you might well get away with the Scala if your original plan was to buy something Golf Estate-sized. The boot is cavernous – class-leadingly so, at 467 litres with the rear seats up – with a low lip and square sides.

Then, of course, there’s Simply Clever, which is Skoda-speak for all the useful things most manufacturers forget or chose to ignore. The ticket-holder mounted on the A-pillar is a classic of the genre, but in the Scala the cap for the screen-wash also folds out to become a funnel, and there’s an ice-scraper that doubles up as a tread-depth gauge stored within the fuel-filler cap. Much more useful than logo-projecting door lights, we say, and far more endearing.

Like the interior, the driving experience is unpretentious. Don’t expect much in the way of weight or feel through the controls, but the combination of this VW-sourced 1.5-litre four-cylinder TSI and dual-clutch gearbox is predictably slick, if not quite the most clinical around. You get a slight rattle on ignition, but thereafter progress is easy-going and impressively refined, at least so far as the powertrain is concerned. This is a nice gearbox calibration, being neither too keen to bolt for the highest, most economical gear possible nor desperate to downshift unnecessarily under power. Overtaking is a cinch, too, so long as you anticipate when to make your move.

The Scala doesn’t ride like a Golf, though – nothing like, as obvious as that might seem. On sensibly sized 17-inch wheels, our test car was serene enough on smooth dual-carriageways but poorer surfaces saw the ride become conspicuously choppy. At times it feels like a car in the class below, which is interesting because this version of the MQB platform – dubbed A0, which Skoda is actually now is charge of developing – is the same used for the Seat Ibiza and Volkswagen T-Roc, rather than the Golf and Audi A3. As an aside, the use of MQB has also allowed Skoda to fit a range of assistance systems, including lane keeping and blind-spot detection programme that can spot overtaking cars as much as 70 metres away.

But what if you happen upon a nice set of bends? Unfortunately the Scala never really gets going dynamically. There is some weight in the steering, but it only reveals itself after you’ve ventured through a slow, numb swathe of lock around the dead-ahead, and by that point you’ve little confidence in the front axle anyway. The car’s balance is reasonably good, and body control adequate, but try to splice quicker corners and unless the road is glass smooth the rear axle constantly tampers with any stability that brings.

Does any of this matter? Well, yes, a bit. This is Autocar, and it would have been nice to discover another an unexpected handling gem, similar to the Seat Leon. As it is, we’re not surprised Skoda has no intention of building a vRS model, and the deft Ford Focus can rest easy as the class benchmark for dynamism. 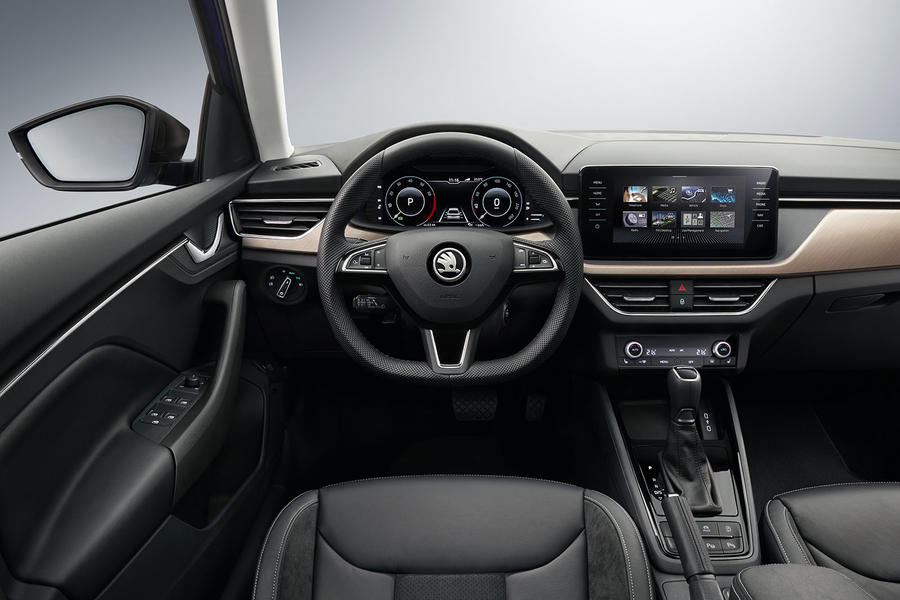 If you’re willing to trade some refinement and rather a lot more handling ability for excellent value and utilitarian charm, then yes, you should probably buy one. Even the most basic Scala S is relatively well equipped, cavernous like no other car in this class and even brings a bit of Audi to the exterior design, if you appreciate that sort of thing. As a tool, you'll like it.

Those on the fence might want to hold fire until we’ve driven the Scala in the UK, though. The car's ride quality and isolation don't live up to similarly sized models found elsewhere in the VW Group stable, which is something British roads may exacerbate. 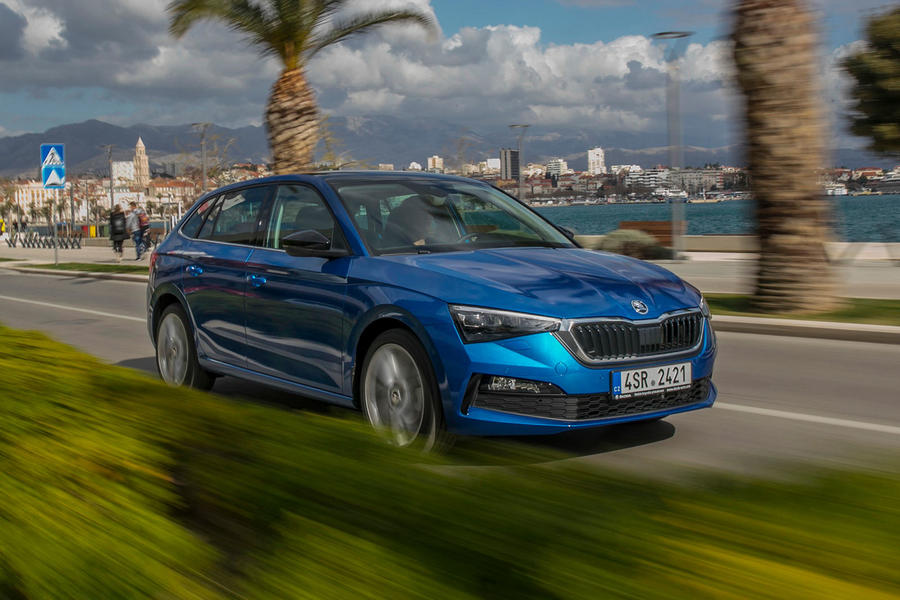 I can forgive hard plastics and previous generation indicator stalks but a poor ride would be much harder to live with. A shame really because the whole package appeals, especially the space on offer. Surprised it's not faster too. With a kerb weight under 1200kg and 150bhp on tap, surely a sub 8 second 0-60 dash is possible.

Might as well tattoo "I suck at life" on your forehead.  Cheaper than buying a Skoda.

Struggling to see the 4*

2 April 2019
Struggling to see the 4* rated car in this review - it’s redeeming qualities appear to be space and value, though I imagine that the model tested is probably going to be early £20k price bracket.

Most other areas seem average or below average, surprised given that the Rapid neither rode orhandled well you would think they may of improved that.

Parts bin special with all sorts of bits tacked on to just make a car with no passion or interesting features.

3 April 2019
Trying a little to hard style wise outside, looking like a BMW within

Autocar rubbished the Rapid when it was first introduced, however,it went on to  be the second best selling model after the Octavia so one is left wondering if these initial reviews have any relevance.

Not according to The AE review of the same car. Better wait and see for ourselves.

The Scala sits on the Polo

The Scala sits on the Polo/Ibiza MQB A0 platform. The current as well as the upcoming Golf/Leon sit on a separate MQB platform which is a bigger, more sophisticated and upscaled platform.

The Scala sits on the Polo/Ibiza MQB A0 platform. The current as well as the upcoming Golf/Leon sit on a separate MQB platform which is a bigger, more sophisticated and upscaled platform.

None of them sit on a MQB platform.  They're all built using the same modular matrix (MQB) which allows them to use high volumes of common components, but for most, the platform is different.  A Skoda Karoq and SEAT Ateca will share a platform, a Golf and a Skoda Octavia will not

Despite being cheaper than some rivals, this is still a huge amount of money to pay for a car (especially in the trims given to journalists to test) so why so many compromises?!

Should do well with mini cab drivers though, once a huge fleet discount is negotiated.