The hatchback showcases the look of the Czech company’s forthcoming Ford Focus-rivalling Scala, which will replace the Rapid in its line-up. It also features elements that preview the look of future performance vRS models – despite there currently being no plans for a Scala vRS – and showcases Skoda’s new plug-in hybrid (PHEV) powertrain.

The PHEV unit in the Vision RS combines a 1.5-litre turbocharged petrol engine with an electric motor to offer a total output of 242bhp. While the specifications are likely to change, the powertrain is expected to be similar to that in Skoda’s first production PHEV model, the facelifted Superb due late next year.

Skoda has yet to confirm other models that will receive plug-in hybrids, although ever-tightening CO2 emissions legislation means it could quickly be adopted across much of its range, particularly the Scala and the next Octavia. Skoda has already told Autocar the next Octavia vRS could feature a hybrid powertrain.

Autocar had the chance for a brief drive in the Vision RS concept. While the test took place at slow speeds, it was a chance to get a taste of the near-future of Skoda’s powertrains, with the firm aiming to offer five electrified models within the next two years. 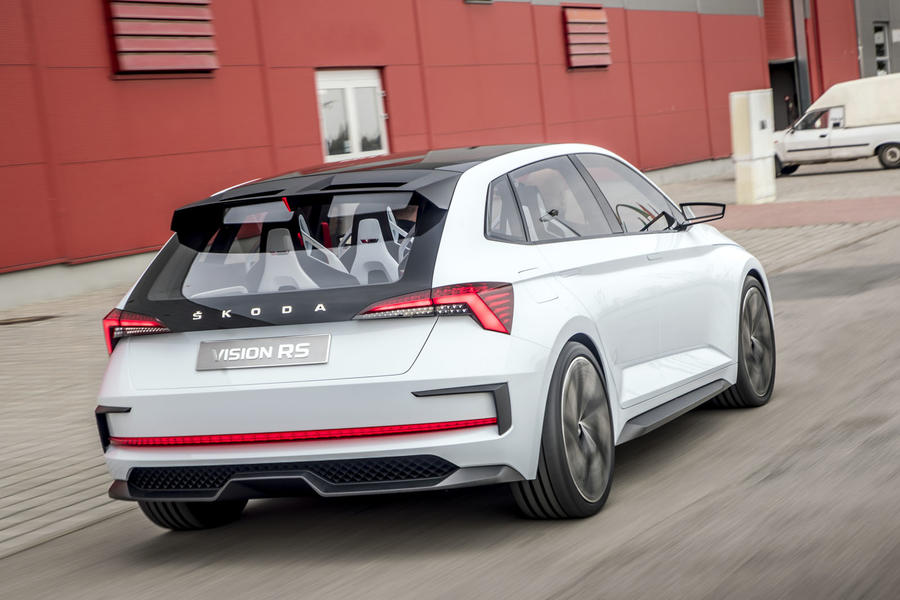 The Vision RS showcases Skoda’s latest design language, and gives a hint at how the forthcoming Scala will look. Just as significantly, it also contains features that hint at the future of the vRS performance line, according to exterior designer Dalibar Pantucek, who says: “the target was to make a sports car in a modern way.”

While some of the design details of the Vision RS - such as the crystal badge and illuminating bars on the front grille – are unlikely to ever make production, a number of elements give a hint of the future design of vRS models, according to Pantucek.

The car has a carbonfibre grille with prominent 3D-style ‘ribs’ and an intricate ‘v’ pattern that Pantucek says could become a “signature” for the vRS family. The extensive use of carbonfibre design elements, including the front and rear diffuser as well as the grille, was made to reduce weight, rather than for style. “Everything on this car is there for a reason,” says Pantucek.

A key element of the car was on maximising efficiency with all the parts, including air intakes on the front bodywork and wheel covers designed to reduce drag and rear spoiler, tested in a wind tunnel. Pantucek says that the wheel covers have a significant effect on reducing drag, and Skoda is looking at offering them as options on forthcoming models – particularly because improving aerodynamic efficiency reduces emissions and boosts fuel economy.

While the side of the car is heavily sculpted, the Vision RS features standard wing mirrors rather than cameras, although these are styled to serve as miniature wings, similar to those on the Skoda Fabia R5 rally car.

Inside, the concept features a new dashboard design featuring carbon elements with a “signature line” that features a central dip where a free-floating touchscreen is located. That screen sits in front of a small shelf, which can be used as a rest while operating the screen.

As well as the Vision RS’s hybrid powertrain, Skoda also says it has demonstrated ‘environmental awareness’ by using Vegan materials, including polyester thread for the Alcantara-covered seats, in its production. 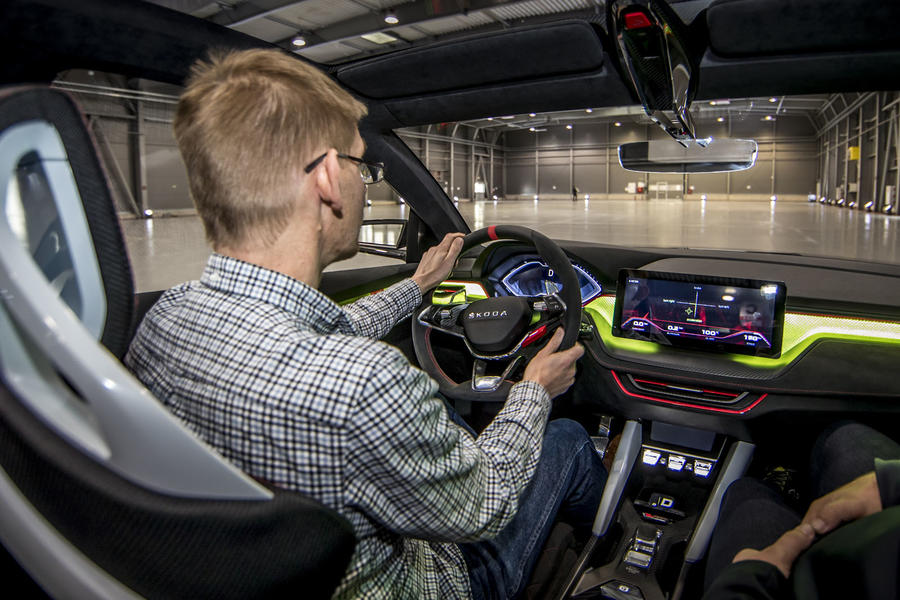 The hybrid tech of the Vision RS concept

The PHEV unit in the Vision RS features a 148bhp, 1.5-litre turbo petrol engine and a 101bhp electric motor, which combine to give 242bhp of total output. On the concept, the system drives all four wheels through a DSG gearbox. Skoda cites a 0-62mph time of 7.1secs, and 50-75mph in 8.9secs.

The electric motor is fed by a 13kWh battery, which gives a potential zero-emission range of 43 miles on the NEDC cycle - and Skoda says it will result in CO2 emissions of less than 50g/km on the stricter WLTP test.

The battery can be charged to capacity in 2.5 hours at a charging station or filled at home via a slower domestic connection. The system is also designed to regenerate energy as it is used. 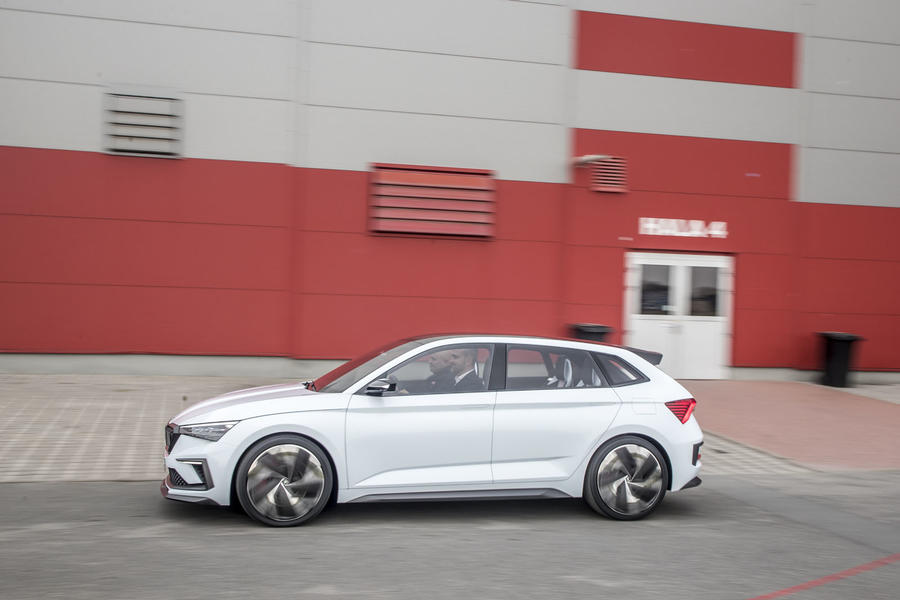 While based on the same VW Group MQB A0 platform as the production Scala will be, the Vision RS is a one-off concept car created for a motor show, and Skoda remains understandably protective of it. Therefore, our short test took place in a controlled environment – and only the electric motor of the hybrid powertrain was called into action.

As such, while we can report that the steering was precise, the ride smooth and the interior both spacious and comfortable, the drive offered little meaningful preview of the Scala's handling dynamics.

What it did showcase was the quiet, smooth, electric-only power of the new hybrid powertrain. Acceleration was brisk, and the power delivery was smooth and responsive, with the instant torque you’d expect from an electric unit. It certainly felt smooth and refined, unlike many show concepts that are designed to be looked at rather than actually driven.

While the ability to offer smooth, relatively slow-speed zero-emission running is only one area where a PHEV powertrain will be required to perform, the rise of no-emission zones in urban areas means it’s one that an ever-greater emphasis will be placed on. And our brief taste suggests Skoda’s plug-in hybrid unit will be well-placed for such usage.

Skoda says there are currently no plans to produce a vRS or PHEV version of the Scala – let alone a Scala vRS PHEV – but the Vision RS concept suggests it’s an idea worthy of consideration. It also shows that Skoda’s future is looking strong in a number of areas. The hybrid powertrain is smooth and refined, as you’d expect given the access to VW Group technology, and the concept’s confident styling certainly bodes well for Skoda’s new family hatch – and for future vRS models.

Too true. There's a new Leon

Too true. There's a new Leon due next year, too. It will probably look just like this with a different badge.

Could be an A3 Sportback

If you couldnt see the grille and someone told you this was the new Audi, would you be able to tell the difference?

Maybe not a bad thing - Skoda seem to be making the sort of stylish understated cars Audi used to ten or twenty years ago, but its all a bit dull.  I liked Skoda better when they were making slightly leftfield stuff like the Fabia vRS, Roomster or Yeti.   Can anyone now tell the four VAG brands apart?   They're barely even priced differently...

Skoda acan only do what V/W allow them to. Thats exactly why the superb was original a twin tail gate - V/W would not allow them to make an estate version at that time for fear of effecting other group brands sales.

Skoda acan only do what V/W allow them to. Thats exactly why the superb was original a twin tail gate - V/W would not allow them to make an estate version at that time for fear of effecting other group brands sales.

If I remember correctly, the original Superb was a normally booted saloon and that the one you're referring to DID have an estate variant.