10
Entry-level battery-saloon is rear drive, lighter and cheaper, so what’s not to like?
Open gallery
Close

Just Taycan. That’s what it says on the back of the latest battery-electric Porsche Taycan variant.

Porsche hasn't called it Taycan Turbo S, not Turbo, not Porsche Taycan 4S. Just Taycan, because this £70,690 car is the simplest, although by no means the least appealing, of Porsche’s battery-electric saloon range.

Shorn of a motor at the front, it is both rear-wheel drive and the lightest version of the Taycan, although these things are still relative. Even with the smaller of two available battery options, which is what I would have said our test had if I hadn’t known differently, it weighs 2050kg, so still the wrong side of two tonnes.

But fitted, as this test car is, with an 87.3kWh usable (93.4kWh total) battery instead of a 71kWh (79.2kWh) battery, it weighs 2130kg. Which, for a five-metre-long battery-electric saloon car, isn’t desperate, but is still 270kg more than a base Porsche Panamera.

With this larger, optional (£4049) ‘Performance Battery Plus’, though, your Taycan has more shove. Instead of the 322bhp (402bhp during launch control [because why not more complication necessitating more parentheses?]) of the regular version, the bigger-battery Taycan has 375bhp in normal driving (or 469bhp while you’re using launch control [which you won’t be]).

It also gives a slightly higher power-to-weight ratio: 176bhp per tonne instead of 157bhp per tonne. Or, to put it another way, both rather less than a Ford Fiesta ST’s. 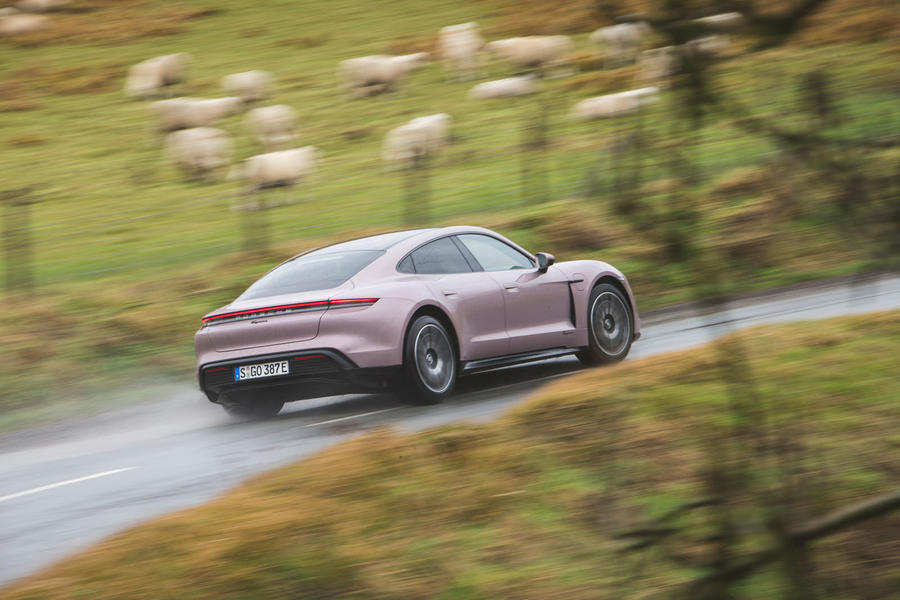 Sliding into the tasteful and rather nicely finished cabin of the Taycan, generously juiced but starting not plugged in, from cold, and on a cold, wet day, I found it telling me I’d only go about 220 miles, which is what I stayed on target to hit. So if you want to go 301 miles on a charge, which is the longest potential of any Taycan, start with a conditioned car and don’t push on too much.

Drive spiritedly, though, and you’ll find this Taycan is rather enjoyable. More so, I think, than the faster Taycans, which are hilarious for their standing start ability and because, well, they still feel like Porsches. But this is even more rewarding, for me.

Shorn of a little weight at the front (about 90kg has come out in all, most of it motor), and with the front wheels having less to do, the steering is even better than usual. Four-wheel-drive Taycans steer with meaty precision. This one adds a little more delicacy to the mix. A bit more, dare I say it (I dare), Porsche 911. Ask the engineers which their preferred model in a line-up is and usually they’ll say it’s the lightest one. I think that’s true here, too.

Even in a tall, heavy car like the Porsche Cayenne, the comapny manages to do excellent things with the chassis. So in a low, heavy car, you can expect and find even better, particularly now that it’s just rear drive. There’s poise and surprising agility and a degree of throttle adjustability that isn’t usually there.

Nor did I notice any change to the braking. In mild braking, only the rear wheels are being slowed, via the motor as it becomes a generator. Only in harder braking do the front discs start to bite, too, but I admit I couldn’t tell you at what point that was.

And I think it’s probably brisk enough. Standing start acceleration is quick, so 0-60mph comes up in 5.1sec, but in normal driving, albeit in near freezing rain when you’d seldom want more than 375bhp, it makes decent progress. 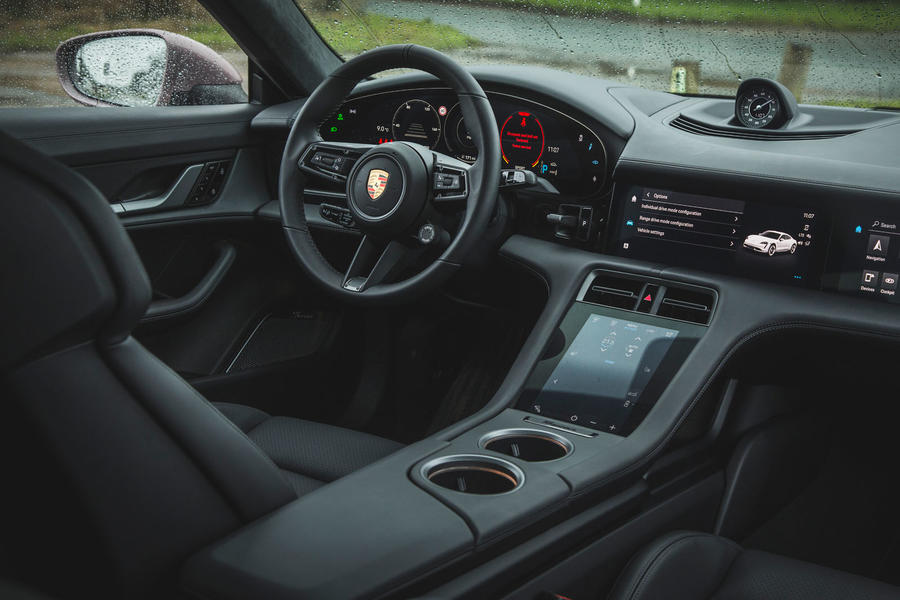 I’d like more to do at the wheel than just go and stop and steer, but that’s the old-fashioned gearchange-and-engine-loving driver in me.

Of all the cars that don’t give you so much to do or to listen to, this is, for me, the most enjoyable on sale. 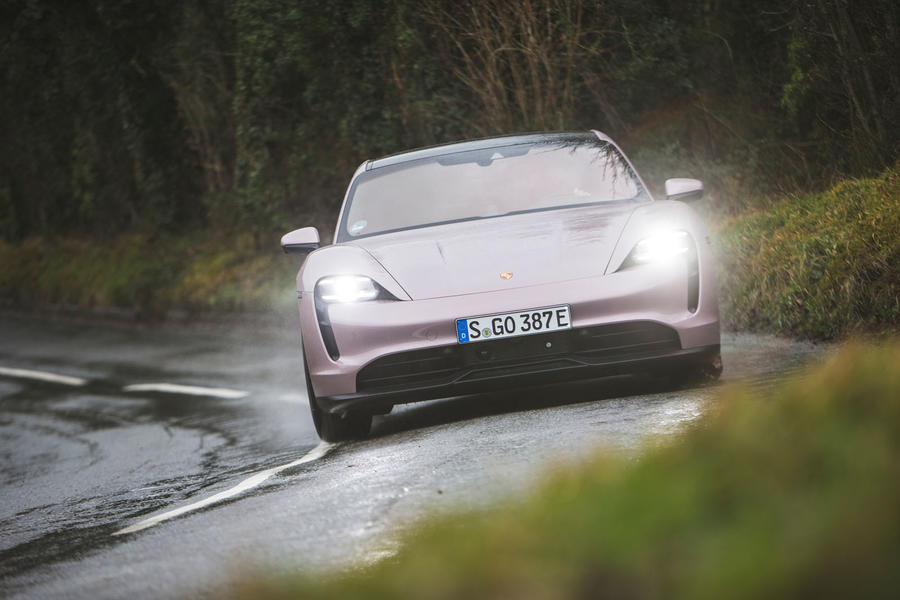 Tesla fans are just embarrassing. I'm sure the cars are ok. Clearly they're no Porsche but they were the first electric car to catch imaginations. Sadly they haven't really progressed, are badly built and still look about as interesting as a bar of soap. I couldn't imagine ever want to sit in one for two hours looking at that weird screen. Tesla bods anger at the Taycan is enormous. Taycans are interesting not just fast.

This is the Taycan and large electric saloon to buy.

It's fast enough, I would simply add the bigger battery and the Mission e alloys so that it looks like the Turbo S for about 1/2 the price.