For reasons I think I understand, this story feels different. Every week, we go some place to drive some thing, and lucky we are to do so. But to drive the first all-electric Porsche – well that, surely, is different.

Different because Porsche and electricity seem as natural a fit as fire and ice. Different because if Porsche really can pull it off and produce the world’s first electric production driver’s car, the ramifications could be enormous. But, for Porsche, perhaps not quite so enormous if it cannot.

Because of the way the media is micro-managed these days, especially with cars as important as this, there is still much about the Porsche Taycan I am not allowed to say, because the car has yet even to be unveiled. So far as official information is concerned, all that exists is what Porsche published when it revealed the Mission E concept in 2015, most of which is now obsolete.

If what follows seems more speculative than factual, you could nevertheless conclude that I know rather more than I’m saying, because not being specific was a condition of getting in the car. I shall therefore leave it to you to decide how well informed such speculation might be. In the words of Francis Urquhart: ‘You might think that. I couldn’t possibly comment…’

There are, in fact, two Taycans, at least that Porsche is owning up to. Actually, there’s certainly a third and very probably a fourth, but in these days of top-down launches, these are less powerful versions that have yet to be seen or driven, officially or otherwise. Which leaves us with the two top cars, widely rumoured to be called Turbo and Turbo S, in line with Porsche’s naming convention. (I know it seems strange given neither even has an engine let alone a turbocharger, but we’ll get used to it.)

Both have batteries rated above 90kWh and standard power outputs substantially in excess of 600bhp. The difference (besides the S having ceramic brakes, a stiffer set-up, standard four-wheel steering and 21in wheels clothed in high-performance tyres) is that while both will ‘overboost’ for 2.5sec at the time, the S will do so rather more, raising its total output to well over 700bhp, with in excess of 750lb ft.

So while the car is predictably heavy – think something around the 2.25-tonne mark – so too is it blindingly quick. The 0-62mph time of the Mission E was quoted at 3.2sec, and I’d expect a Taycan Turbo S to be as far below the three-second mark as the E was above it.

When I drove both cars in prototype form, their interiors were completely camouflaged but have since been revealed to feature next-generation high-definition imaging that, if you choose the optional passenger information display, provides TFT screens almost from wall to wall across the entire width of the car. It looks quite intimidating but, in terms of the admittedly limited operations I was able to use, it all works fairly intuitively. 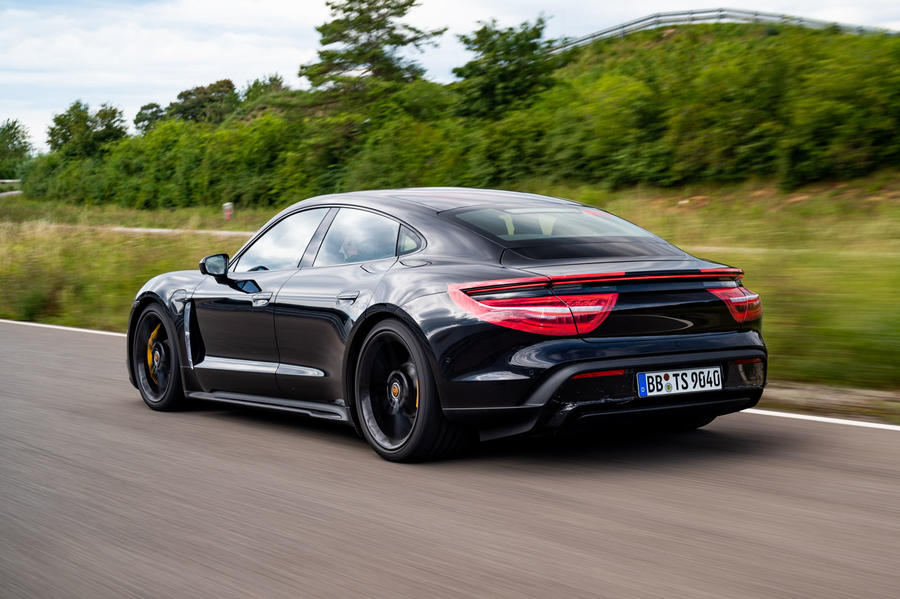 And that is quite enough about the Taycan’s static qualities. You sit low in the car, in line with Porsche’s determination to present the Taycan as a sporting, driver’s machine, despite its mass, electric powertrain, four doors and (reasonably) spacious cabin. Shut your eyes and you could almost be in a Porsche 911.

Press a button to put the car in standby mode and depress a little lever to knock it into drive. We ease away from the Weissach test track and out onto the public road. The strange thing here is that, even having spent many hours in the Taycan’s passenger seat in the Arctic, I still don’t really know what to expect. Fact is that while electric cars from major manufacturers are becoming considerably more common, there has still never been one like this, or even remotely so. For all the apparent familiarity, this still feels like the biggest voyage into the unknown for years.

And yet… Sitting in this brand-new car with its brand-new platform and powertrain, here’s something very familiar. It feels like a Porsche. Not like a Porsche Cayenne or Porsche Panamera but – and it feels silly saying it, given the weight of the car and the length of its wheelbase – something closer to a 911. And I’ve not done 30mph yet. It’s all about the steering: the heft, the precision, the off-centre linearity all are cut straight from the Porsche sports car textbook.

I find it utterly surprising and profoundly reassuring, not least because now we’re out of Weissach and time is short. I have to drive fast right away, despite every other seat being occupied by Porsche engineers. I don’t much like driving rapidly with anyone in the car, let alone overseen by the best in the business, but there is no choice.

The Turbo S (if that is its name) is fast enough to make you feel giddy on overboost. The torque delivery is so instant, the acceleration so violent and explosive, that it’s briefly not that pleasant an experience. And that’s with 700bhp. I don’t find it hard to imagine what any one of the growing mob of 2000bhp electric hypercars will be like: I find it impossible.

The rate doesn’t really abate until you’re well into licence-losing territory, and you’ll be fearing for your liberty before it becomes in any way normal. 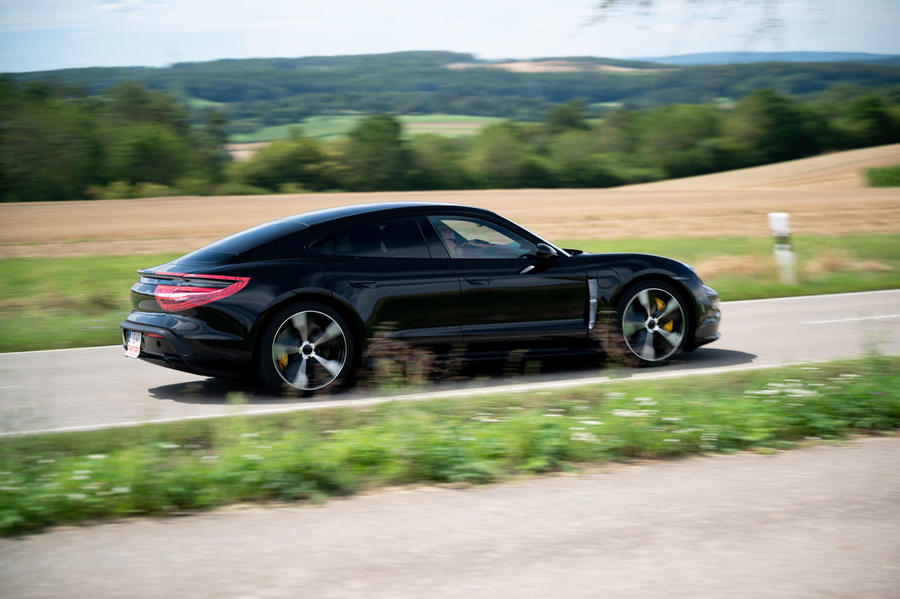 The sound? Unmistakably electric, for sure, but not unpleasant when extended, unlike many petrol engines, at least one of which is made by Porsche. There’s a sound enhancer that might on paper appear completely pointless because all it does is play an acoustically optimised version of what’s already there, but I quite liked it. It adds character to the car’s muted voice, and even if it’s only a sliver, it’s appreciated nonetheless.

We’re going fast now and I’m learning all the time. The suspension takes big chunks of Panamera componentry but the actual three-chamber struts are unique to the Taycan. The car rides eerily well but is so deftly damped in Sport and Sport Plus that with that steering and devastating acceleration, it’s monstrously fast from point to point, even on difficult roads. No car in my experience has ever managed this amount of mass so well. No, you can’t lob it as you might a shorter, lighter car, but once you’ve guided it into the apex, its composure is phenomenal.

But is it fun? Well, yes, because its capabilities will leave you slack-jawed and anything that can do that is always amusing, and no, because it’s still nothing like the fully immersive driving experience of, say, a 911. And with four doors, that mass and that wheelbase, but without a flat six or any gearbox, that’s not too surprising.

There’s still stuff I’d change here. Most notable is the lack of ‘engine’ braking when you come off the accelerator. It is Porsche philosophy that, broadly speaking, one pedal should make the car go and the other should make it stop, and while you can vary the degree of off-throttle deceleration, I’d like more, even at its peak in Sport Plus. I kept barrelling up to corners tapping a non-existent paddle for downshifts that weren’t there. You need to use the brakes – or what feel like the brakes – far more than in a normal car. In fact, up to 80% of the available deceleration does not require the massive discs at all. Took me a while to get my head around that one, too.

I have a smaller issue with the brakes themselves: buy a Turbo S and ceramics are standard, although I far preferred the meatier feel of the still mightily powerful tungsten-coated brakes on the Turbo.

In fact, with the Turbo costing around £15,000 less than the Turbo S at approximately £120,000, I’d seriously consider it for its smaller 20in wheels, even more compliant ride and better-feeling brakes, although I would tick the option for the S’s standard four-wheel steering, which helps to shrink the car in tight turns and provides formidable stability in quick curves. But most owners will, of course, fork out the additional £15,000, not for what it buys them but for what it saves them: the thought of friends and neighbours concluding that the additional letter is absent through finite financial resource. 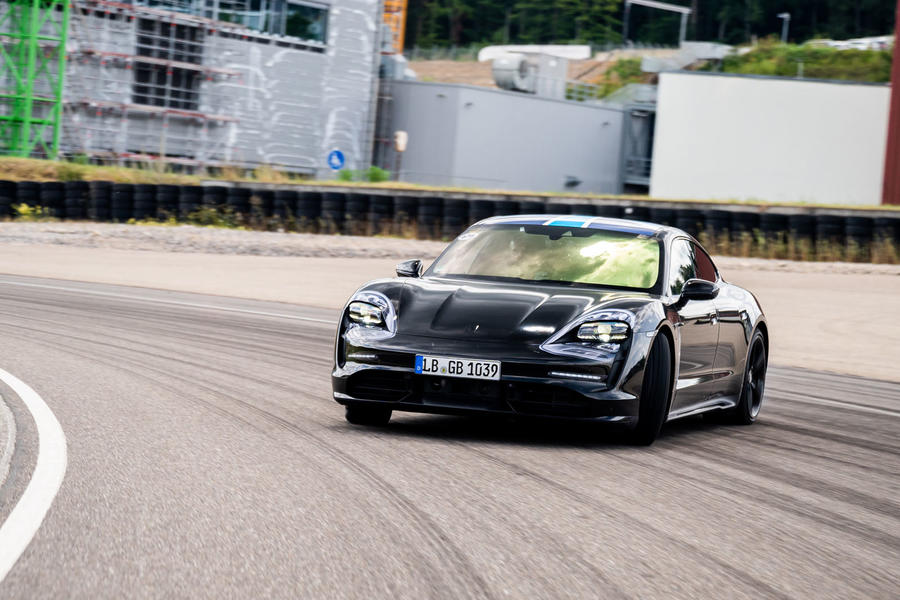 Let’s for a minute forget the Taycan is electric. Just in terms of what and how it does what it does, is this a proper Porsche? In these days of Porsche Cayennes and Porsche Panameras, and based on first impressions of the prototypes I drove, unequivocally so.

If you want to enjoy driving a Porsche more than this, you need one with its engine behind the driver. And yet it’s one of the most comfortable GTs I’ve known and without question the quietest. In the distance and directions it is able to throw the net of its abilities, it is an astonishing, even an astounding, achievement.

Is this, then, the world’s first mainstream electric sports car? There I must stop you. It is sporting, for sure, and far more so than any other, but will Taycan owners set alarms and go for pre-dawn blasts – I mean whirrs – just because they can? That I doubt.

Then again, it is not that kind of car, and nor was it ever intended to be so. For now, the Taycan and its creators will have to be happy with having created the best electric car yet to go on sale, and having done so by a mile. 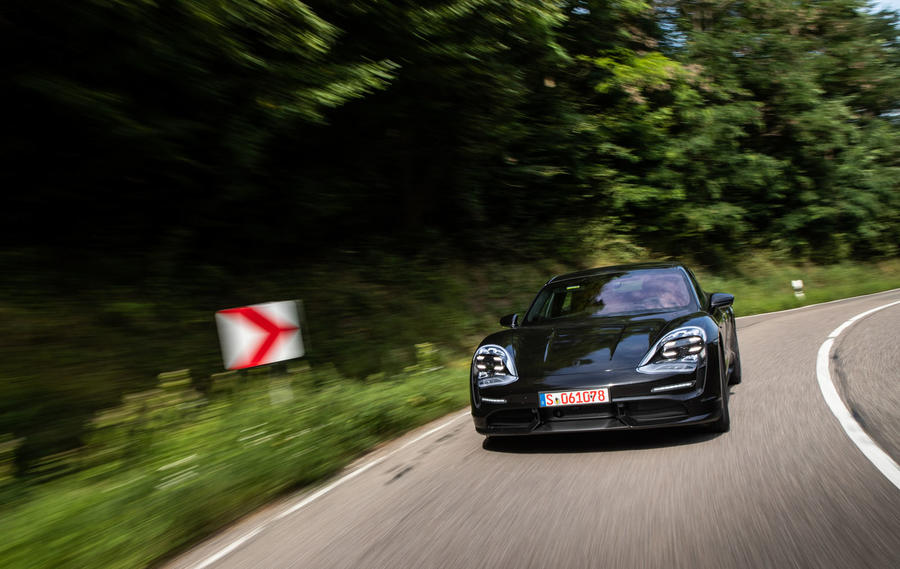 Sounds like a good EV, as you'd expect at that price. But Turbo? Is that really the best they could come up with? What's wrong with Carrera, S, and SS?

The main problem is that it

The main problem is that it will also be competing against itself - not really a Tesla. A Taycan sale would be one less Cayenne, Panamera a 911...not too many people buy two Porsche of the same class. So they will sell a good number of Taycans but Porsche may sell less cars overall and thus less revenue (and bottomline profit). This is true for all legacy auto makers....and something that new upstarts like Tesla does not face (yet)....

The Model 3 Dual Motor Performance has not dissimilar stats and costs £49K.  A phenomenal achievement.  The level of quality isn't as good as Porsche or indeed Audi products, but it's not bad.  I know the Taycan is more of a Model S competitor but I reckon both are too big for properly sporting use in the UK.

Tesla dragged up again, no doubt a Tesla can’t be ignored, it’s EV powered, If has phenomenal acceleration, beats many a Supercar in much publicised drag races, but they’re four Door Transport, yes there’s the Roadster coming soon, even an HGV, to say the model three is comparable is shear folly, you acknowledge they’re not that well built, very Spartan inside too, but, when your spending upwards of £100K you want a bit of luxury, you want to see,touch, smell where the money has been spent, that means just as much as how fast the car can go, and another thing, nobody recognises that fast cars require driving skills, providing you’ve got the required funds to purchase you can buy most Cars on sale, should ability be considered by the seller or at least offer some sort of tuition?, no, a Tesla isn’t a Porsche crown contender, different cars entirely....