From £23,1307
This overhaul has given the X-Trail a new lease of life, especially inside - but more hush would have been welcome
Open gallery
Close

The Nissan X-Trail is the world’s best-selling SUV, according to Nissan. A remarkable 750,000 examples of the X-Trail (badged Rogue in some overseas markets) found owners in 2016.

Now is clearly a good time for the third-generation X-Trail, initially launched in 2014, to be refreshed. This isn't a massive makeover, with much of the effort going into updating the exterior, making the interior feel more upmarket and adding more electronic gadgetry.

On the outside, the nose has been remodelled - it’s more aggressive, distinctive and chromed - and the rear bumper has been reworked for a similar result. Higher-spec models get a visual lift from a big chrome strip along the bottoms of the doors. Inside, Nissan makes much of the new ‘premium’ steering wheel, which is bigger and fatter and has more fingertip controls. 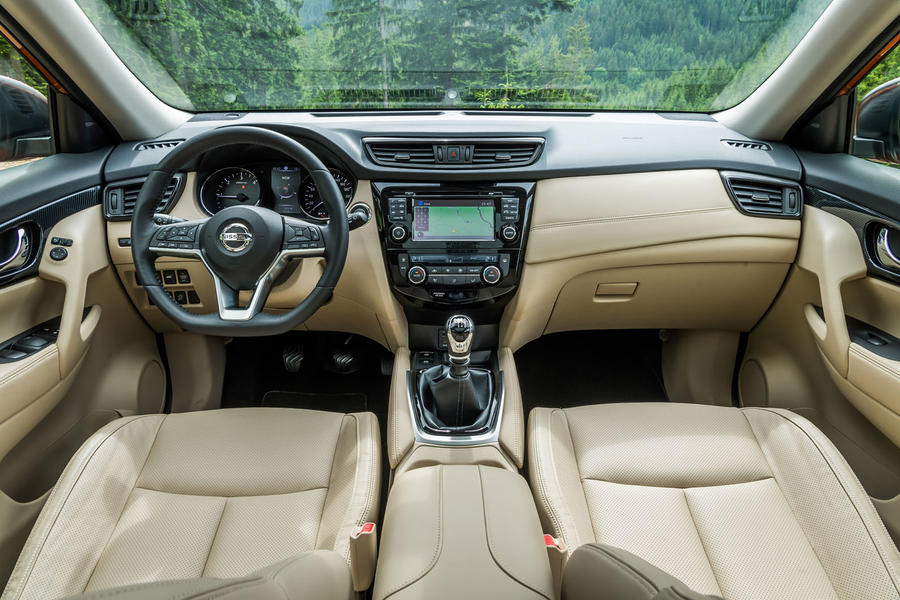 The centre console has also been restyled for more storage space and there are various other upgrades in materials and finishes. Top-end versions now have seat heating for the front and second-row seats and a hands-free electric tailgate. A (child-size) third row of seats is still available and the boot size in the two-row versions has edged up in capacity to 565 litres.

Nissan is heavily pushing driver assistance technology, so the X-Trail gets quite a raft of options. These include a new ‘Rear Cross Traffic Alert’ that gives warnings when reversing out of a parking space. Also new is ‘Stand Still Assist’, which can hold a manual X-Trail stationary for three minutes before applying the handbrake. In early 2018, Nissan will add the option of 'ProPilot', which can control the X-Trail’s steering, acceleration and braking - within a single lane - on a motorway in heavy congestion and at a high-speed cruise.

The engine choice remains the same: a 128bhp 1.6-litre diesel, a 174bhp 2.0-litre diesel and a 161bhp 1.6-litre turbo petrol, mixed with manual or CVT gearboxes and front-wheel or four-wheel drive. 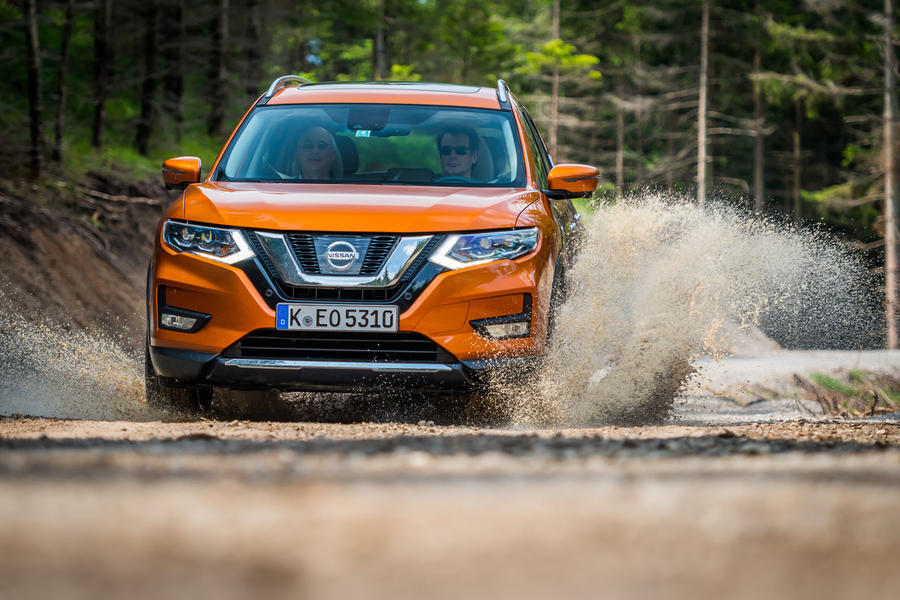 At the launch in Austria, our test car was a range-topping Tekna, equipped with the 2.0-litre diesel engine, six-speed manual gearbox and four-wheel drive. The CVT is now also available in conjunction with all-wheel drive, for those who would prefer it.

Although this car has a beefy list price of around £34,000, it looks like value next to the established premium-brand competition. The entry-level, £23,000 1.6-litre diesel model is even more so, but Nissan says 47% of sales will be of the range-topping version.

There’s no doubt the X-Trail hits something of A sweet spot. The car is imposing and looks like it could handle a dusty trail, but not at the cost of being unwieldy in urban areas. The refreshed interior is also pleasingly smart and plush-looking.

The new flat-bottomed steering wheel really does make a difference to the driver’s sense of quality, and while the interior is not an exercise in cutting-edge aesthetics, it has a fine sense of style and practicality. And we shouldn’t overlook the traditional Japanese ability to engineer tightly constructed interiors.

On the road, the X-Trail is nothing more and nothing less than an very amiable companion. It’s comfortable, has an excellent driving position and is an entirely undemanding car in typical driving conditions. The X-Trail asks very little of the driver and there are few drivers who will be minded to ask very much of the X-Trail. This car is a good way of making the monotony of rush hours and busy motorways as bearable as possible. It runs straight and is easy to wind along a country lane.

With that in mind, it’s a shame that Nissan has not done more to address refinement. As we has noted with the outgoing model, this diesel engine is not as hushed as it might be. Under hard acceleration and when cruising at higher speeds, it needs to be better isolated. 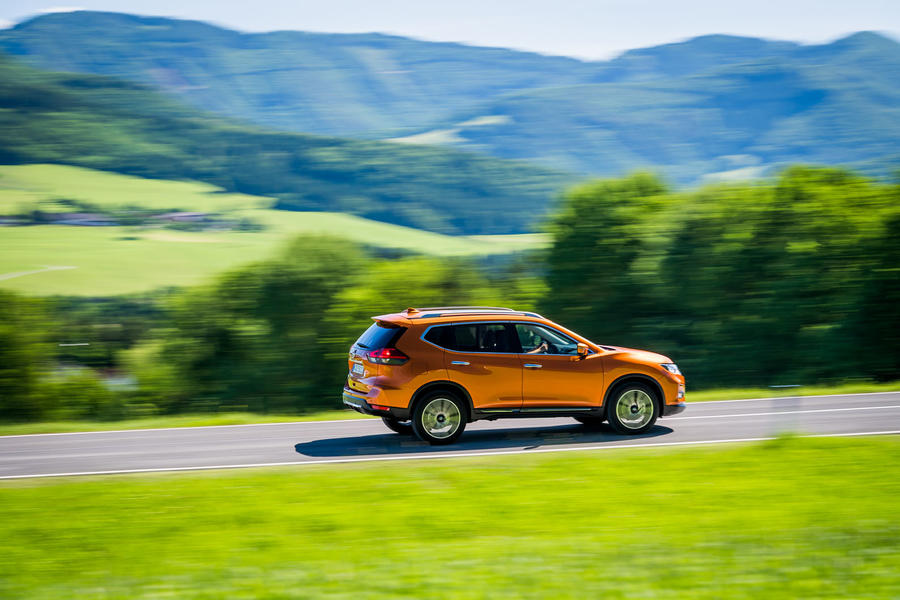 We drove this car back to back in Austria with the latest iteration of the Qashqai, which has been given a significant - and successful - upgrade in terms of overall refinement. The X-Trail is too noisy at motorway speeds, suffering engine intrusion and more wind flutter around the A-pillars than it should have.

The X-Trail is a million miles from being a hot rod and will hold little interest for anyone who wants to be engaged with their mode of transport. But it looks good, can handle light off-roading (it was pretty effortless on mountainous fire trails in Austria), has a nice interior, a very usable cabin and boot and is comfortable and pleasurably undemanding.

You can see why it has become the world’s biggest-selling crossover, offering an impressive amount at a discount to premium-brand rivals. But it’s frustrating that Nissan has failed to offer the same upgrades in refinement - especially for this diesel version - that did so much for the new Qashqai. 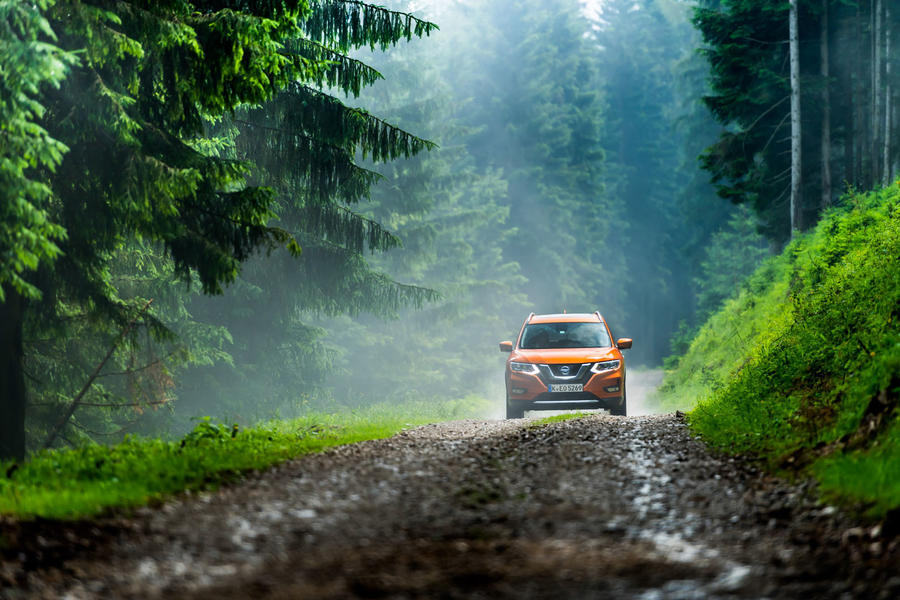 I like these. and the added benefit of the 2 extra seats when required is a big plus. Shame about the confusing engine refinement in such a big car.

I am highly suspicious of the CVT gearbox. I tried a car with it many years ago, and hated the way the engine screamed whilst the car tried to catch up.

What a shame they have put it in what might have been an attractive car for short listing!

A good car. That is why it sells. I was very impressed by my friend's x-trail. Struck me as a good compromise, rode well, lots of kit, comfy, plenty of space, good mpg, not too slow, etc etc.