BACK TO ALL NEWS
Currently reading: Renault, Nissan and Mitsubishi to increase technology sharing
UP NEXT
New report questions government's 2030 ban

Renault, Nissan and Mitsubishi have reaffirmed their commitment to their automotive Alliance, with the adoption of a new business model that will involve a massive increase in platform, technology and production sharing.

The future of the Renault-Nissan-Mitsubishi Alliance had been in doubt after the arrest in Japan of former chairman Carlos Ghosn, the driving force behind the initiative. But after agreeing to maintain the Alliance in January, the three firms have now agreed a new deal.

Alliance chairman Jean-Dominique Senard said the new deal will greatly enhance the cooperation between the three firms and claimed that it will cut the costs of developing new models by up to 40%.

The Alliance members have agreed a new ‘leader-follower’ scheme that they say will greatly enhance efficiency through a substantial increase in shared production and development. Each will become the lead ‘reference’ brand in key regions and of key technologies.

The new deal goes beyond platform sharing and will include the “upper bodies” of vehicles, with the production of models grouped together where possible. As recently reported, that is likely to involve Renault SUVs being built at the Nissan plant in Sunderland in the future.

“The leader-follow model isn't about being a leader against each other; it’s about each Alliance firm becoming a leader in the automotive industry.”

Senard insisted that the new agreement showcased the strength of the Alliance. He added: “There is no doubt about how this scheme will work in the future. If there have been doubts in the market, there are no doubts today.”

Under the new agreement, each of the three firms will focus on key regions based on their existing market reach, with Renault taking the lead in Europe along with Russia, South America and North Africa.

While Renault will be the lead brand in Europe, both Nissan and Mitsubishi can continue to offer models in each region, although they will likely focus on market segments where they're strong. Nissan is set to outline more details of its future European strategy in a press conference tomorrow (Thursday 28 May).

During the presentation on the new agreement, the Alliance members gave no indication of future plans for model lines outside of those areas. There have been reports that Renault is set to close a number of factories and axe several product lines; more information on those reports is likely to come when the French firm holds its own press conference on Friday 29 May. 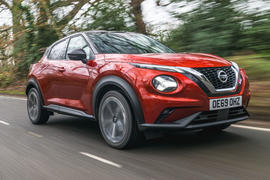 Nissan will be the lead brand in China, North America and Japan, while Mitsubishi will lead in the South-East Asia (ASEAN) and Oceania regions.

Senard also ruled out the possibility of a full merger between the three firms, adding: "I'm confident that, because of the actions we have taken today, in the future we will be a model for other car firms."

A key part of the new deal is the agreement to increase the Alliance’s ‘standardisation’ strategy. The three companies have already developed a series of common shared platforms that underpin various models, for example with the recently launched Renault Clio and Nissan Juke both based on the CMF-B architecture.

Under the new agreement, the three firms will each take the lead on development of key model segments, developing a ‘mother car’ that will be used as the basis for ‘follower’ vehicles from the other firms. As well as platforms, that will involve sharing upper body elements, with Senard saying production of models would be grouped together where appropriate.

The Alliance claims the savings enabled by the new model in terms of technical development and bulk buying strength will reduce model investment costs by up to 40%.

Under the agreement, nearly half of all Alliance models will be development produced under the ‘leader-follower’ scheme by 2025, with the technology and model segments each firm will take the lead on are based on their existing expertise.

Having essentially created the segment with the Qashqai, Nissan will take the lead of the next-generation Qashqai/Renault Kadjar C-SUV, due after 2025 and based on the CMF-C platform. Renault will take the lead on developing future B-SUV models such as the Renault Captur and Nissan Juke.

Nissan and Mitsubishi will also work together on a kei car platform for Japan.

As well as future model segments, each Alliance member will take the lead on key technologies.

Nissan will be the lead firm for electric powertrains (for both the CMF-A/B and CMF-EV platforms), autonomous driving and connected car technology in China. Renault will lead on connected car technologies on an Android-based platform and ‘E-body’ electric-electronic architecture. Mitsubishi will build on its success with the Outlander PHEV by leading development of C/D-segment plug-in hybrid models.

Perhaps because if it weren't for the merger, Nissan would no longer exist.

legohead that is fake news

Perhaps because if it weren't for the merger, Nissan would no longer exist.

Nissan was completely fine before the alliance, stop spreading the tired myth that Nissan was on the verge of bankruptcy before the merger

WHY? Nissan should CUT off this pointless alliance,rant incoming

Why has Nissan management in Japan allowed renault to leach off them? Nissan wanting to be more cosmopolitan and western put useless token foreigner carlos ghosn in charge who was behind the Nissan/renault merger, this diluted Nissan using creative accounting to bail out failing Renault and pocketing some money on the side. No surprise he is now a Criminal fugitive with an arrest warrant for him by the Japanese government for massive tax fraud.. I understand allowing a partnership would be beneficial Nissan/Mitsubishi to get access to the lucrative chinese market because of the ccps racist trade practices virtually bans all Japanese branded cars but they can sell nissans, datsuns re-badged as Renaults. But is access to the chicom market worth it at the cost of having a parasitic partnership? The entire point of partnerships is that its equal so why does Nissan harm itself carrying a huge liability with minimal benefit. It feels like Nissan is doing ALL of the heavy lifting in this alliance, Nissan sales are good globally yet Renault are non existent outside of france and china and are currently begging the french government for a bailout. My main point is that a successful Japanese car companies should stick to what they know much like the Toyota model: homogeneous upper management, minimal alliances and not trying to be edgy and progressive having token western ceos in charge who will destroy the company.