From £28,5458
The baby Jaguar looks largely the same but gets a new platform, plug-in hybrid power and refreshed interior. Will it be enough?
Open gallery
Close

Don’t be fooled by the looks. Despite this facelifted Jaguar E-Pace appearing nigh on identical to the old car - even Jag’s info stretches to only a few lines of text - this is a radically different car underneath.

For starters, it’s a plug-in hybrid. Running a three-cylinder petrol and a single rear-sited electric motor powered by a 15kWh mid-mounted battery, the E-Pace PHEV is good for a combined, and punchy, 305bhp and 398lb ft - figures that put it well ahead of the Peugeot 3008 Hybrid4 and matching the Mercedes GLA 250e.

As such, and despite the E-Pace weighing 2173kg (blame the 124kg for part of that mass), it will cover 0-62mph in 6.5sec and reach a top speed of 134mph. That makes it the fastest-accelerating E-Pace and outstrips the GLA 250e.

It’s also on a new platform, ditching the Ford-related P8 underpinnings for the newer Jaguar Land Rover PTA platform. As a result, Jaguar has brought its baby into line with the Land Rover Discovery Sport and Range Rover Evoque. The update also means the E-Pace gets further powertrain updates in addition to the plug-in: there are seven new engines on offer and six of those are hybridised in one form or another.

As we said, the looks are also slightly tweaked. In case you’re interested, the details are: aerodynamically optimised bumper, revised lower apertures, reworked LED headlights and a new grille. It’s minor stuff, but the Ian Callum-designed exterior is holding up well as it ages so why fix it.

Inside, the transformation is more pronounced. For starters, the E-Pace gets Jag’s Pivi Pro infotainment system, a touchscreen-based set-up that looks far slicker and runs much quicker than the old Touch Pro system. It’s not a bad one to operate, as far as touchscreens go, in that the home screen is three large vertical sections, so it’s easy to scroll between nav, battery status and media. Apple CarPlay and Android Auto are standard.

The rotary climate dials beneath the screen are new, as is the stubby gear selector. Down here on the transmission tunnel is also where you control the drive mode. The E-Pace even comes with a Dynamic mode, tweaking the steering, engine and gearbox. More relevantly, ahead of the drive mode switch is where you toggle between Save, EV and Hybrid for the powertrain.

Jaguar says the quality of the materials has been improved and it does feel like a smarter environment now, with lots of satin-finish plastics and cloth door cards that are a smart grey colour. It’s maybe not quite up there with the futuristic looks of the GLA, but it’s not as far behind as it was. 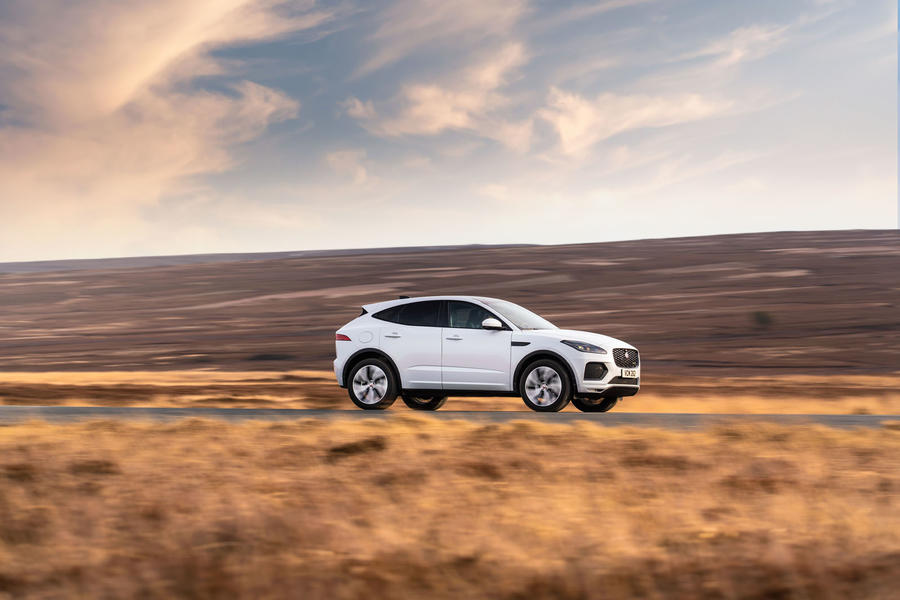 It’s the slightly sportier one. In a class where rivals largely play on the safer side of dynamism, the E-Pace has a bit more attitude about it.

The engine helps. A three-cylinder petrol engine tends to have a decent amount of character, thrumming away in the background, and this one is no different. The noise never completely disappears, but to our ears, that’s no bad thing. In hybrid mode, it and the electric motor combine to make the E-Pace a quick car. It pulls cleanly through the rev range and doesn’t struggle overtaking lorries.

The electric-only aspect of the powertrain is like that of most rivals: it's punchy enough around town but starts to feel a bit flat once you’re above 40mph. It will run in EV when you’re at motorway speeds, but not on long uphill stretches or if you want a bit more oomph for overtaking. That’s when the hybrid element kicks in and it’s a smooth transition.

The car can run on electrons only for 34 miles and that’s not far off a real-world figure. When we jumped in the car on a 4deg C day, it was showing a 32-mile fully charged range. Obviously, the claimed 141mpg is miles off a real-world figure, but we did get a reasonable 42.5mpg out of it during a test covering a mix of roads. Given that diesel Discovery Sports never seem to get much above high 30s, I’d say that’s a pretty fair return.

The suspension does a good job of ironing out the worst of the primary and secondary bumps, while keeping a good handle on body control through a corner. There’s an edge to the way it moves through a corner, with a hint of feedback and interest that keeps things entertaining. The electrically assisted steering is sharp and direct, with enough feel for what’s needed in this sort of car.

It all helps to lend the car a bit more excitement than some rivals. 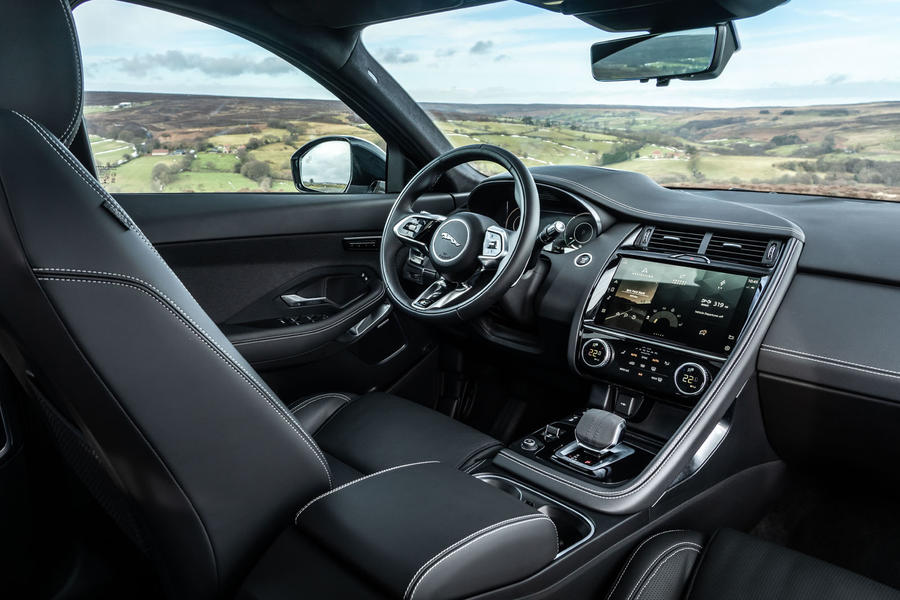 It’s a really interesting addition to the small SUV PHEV ranks (if that’s not too many qualifiers for you): not because it does anything radically different, but because it’s a bit more interesting to drive than most rivals.

As a plug-in hybrid, it’s not cheap - our mid-level trim is nearer £50k than feels comfortable - but it does feel like there’s now a reason to buy an E-Pace over rivals. That can only be a good thing. 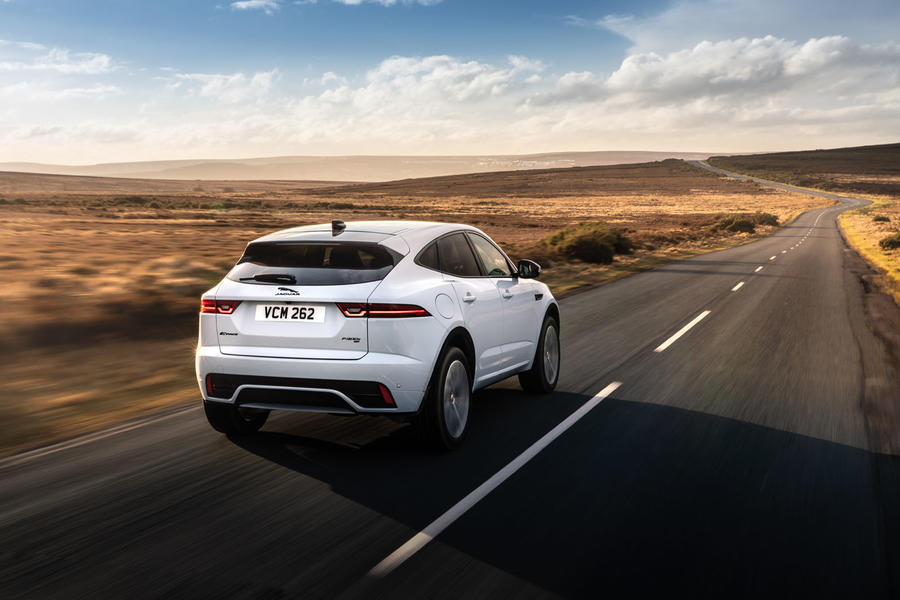 Bollore really needs to rethink the crazy idea of pulling Jaguar away from the huge SUV market. This is the only area Jaguar have had any sucess in.

Why do journalists keep saying the WLTP figures are obviously impossible to achieve. In the article it says "Obviously, the claimed 141mpg is miles off a real-world figure". Why would that be. It could be anywhere from 42.5mpg to infinite. It would be useful if reviews could measure the mpg from a completely flat battery so the reader can work out what their consumption is likely to be.

In my case, assuming it gets 42.5mpg with a flat battery (not clear that is the case) and I can get 32 miles on a full battery and I charge it overnight, I calculate on my 45 mile round trip commute  I would get 147mpg. I rarely do more than 32 miles in one trip at other times so 147mpg would be the worst case.

If I had a shorter commute, say 32 miles I would not burn any fuel at all. And have the option of a longer journey without range anxiety, or if I failed to charge it up overnight. Best of both worlds I think.

These high mpg figures are achievable for most users, only motoring journalist doing long journeys regularly or who do not charge overnight are thinking they are obviously not achievable.

Is anyone getting these high mpg figures with their plug in hybrids?

I agree Nigel with your assumptions. Indeed with my old Golf GTE i achieved 125 mpg average over 2 years so it's totally achievable based on your own situation and very cheap to run

Why buy a car with an ICE in the first place if you rarely do over 30 miles a day, just get an bev and do over 200mpg. Phevs are often 8k more than the ice version and the private buyer will never get that back. Heavier and less fun too. Just for tax dodgers, end of.

What you see here are Jaguars problems laid bare.

This is what the car should have been three years ago and now the shape is familiar, will anybody care that quality is so much improved on the inside?

It's a good car with a revered British badge, being reviewed by a Jaguarphilic press. It gets the Autocar ubiquitous four stars and while it is a recommendation of sorts, there are alot of qualifiers in the 'Should I buy one?' Also, with so much new electrical and electronic tech plus Jaguar involved, one must question how reliable this will be in future.

I notice also there is no mention of rear seat/boot space which has never been a strong point of the E-Pace, but the battery in this one must reduce it further.

Then you come to the price, from £30k up to a gobsmacking £50k (plus options) for a smallish crossover! Only company funded purchasers will even look at this, which rules out nearly 50% of potential buyers.

Agree with this. Not just the E Pace but all the recently revised Jaguars are what they should have been at launch. The firm wouldn't be having the problems they are now.