The first question was about how we list the new Citroën C5 X under one of the online menus we have. How do we categorise it? Is it an estate, an SUV, a hatchback, a crossover, a large family saloon, a compact executive car or what?

And in answer: yes, yes it is.

Citroën, prolific maker of many small cars, has also made some great big ones in the past, but it's fickle about how often it produces them – mostly, one suspects, because while they’re often cool, they’re also not universally popular.

And the market for big cars from conventional (by which I mean non-premium) brands is shrinking. They call it the D-segment. That which contains the Volkswagen Passat, Vauxhall Insignia, Ford Mondeo and historically a dozen other models from mainstream brands, or “a segment that to all intents and purposes is sad, boring and steadily decreasing,” according to Citroën's engaging CEO, Vincent Cobée.

Nonetheless Citroën is launching a new car into it. It’s a new big car that it hopes is none of the above. It’s a car created with “a willingness and a readiness to be different”.

The C5 X, then (pronounced X, not Cross, although they won’t mind too much either way), is a 4.8-metre-long, 1.8-metre-wide fastback/hatchback/estate (look, whatever) with a raised ride height to give it an crossover/SUV-ish appearance without all of the frontal area of an actual SUV. The looks without the inefficiency.

It sits on the platform that gives us so many Citroëns and Peugeot models (the windscreen is even the same as on the latest Peugeot 308), meaning it has a steel monocoque, front-wheel drive and pure petrol and plug-in hybrid powertrain options. “We could do a four-wheel drive one, but we won’t,” says Cobée.

The E-Berlingo has a certain charm to it

Living and commuting with a big EV

Living and commuting with a big EV 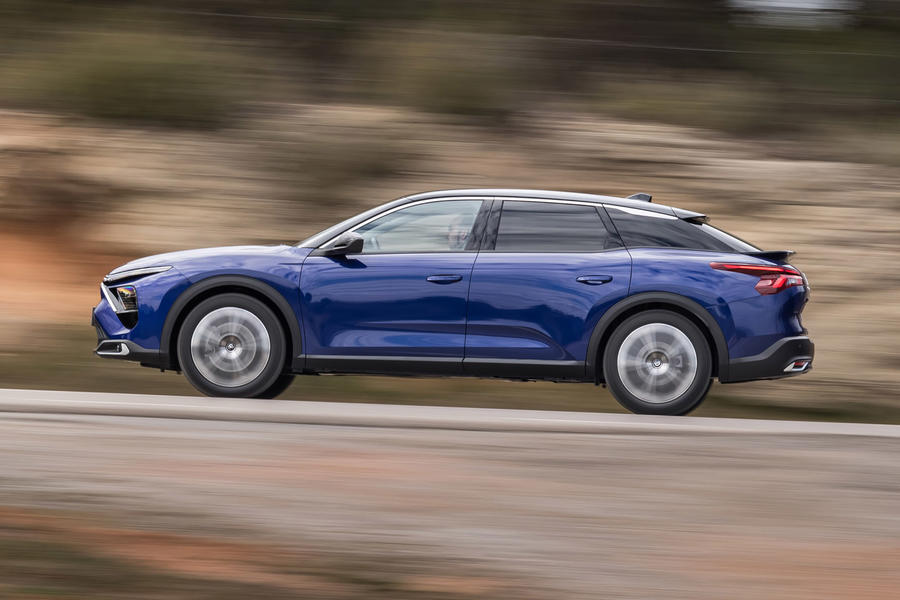 In the UK, there will be a 1.2-litre three-cylinder petrol with 129bhp (badged 130 and expected to be the biggest seller here) and a 1.6-litre petrol with 178bhp, which not many people will buy, because it’s nearly as expensive as the 1.6-litre plug-in hybrid with 225bhp and up to 31 miles of electric-only range.

Suspension is by MacPherson struts at the front and multi-link at the rear. All models get Citroën's Progressive Hydraulic Cushions and hybrids get electronically controlled dampers, too, which change according to the driving mode.

Now, some car makers chase sportiness and dynamism, which make for excellent games of lingo bingo at car-launch press conferences, if not actually for making appropriately set-up family cars (‘sportiness’ 10 points, ‘fun to drive’ 10 points, ‘Nürburgring’ 20 points). But Citroën is chasing comfort. “We want to be remembered for the elevation of comfort and lift it to the level of ‘care’,” Cobée says.

So the large-diameter (19in) wheels that help give the C5 X its ride height are shod with plump 205/55 tyres to add absorbency to what’s apparently a softly set-up car. It's a novel approach and, if done well, could be a seriously tempting one.

First, though, to the interior. Largely I like it in here. The driving position is widely adjustable, the seats large and comfortable and the steering wheel, pleasingly finished, has some actual buttons on it. Hurrah.

Praise be, too, that the heating and ventilation controls are physical buttons with twiddly knobs for the temperature – so easy, so quick, so safe to use. There is a touchscreen, of course, and it’s slightly concerning to hear that its icons and functions are inspired by smartphones, because you’re really not meant to use those while driving at 70mph. But in the grand scheme of things, it’s not so bad: some shortcuts are very short and you can rest your finger beneath it.

Perceived material quality is pretty good, especially at this money. There are soft-touch surfaces where you would expect and some interesting textile choices featuring little chevrons in other places. Fit and finish are strong.

Spaciousness in the back is excellent. The roofline means it gets only sound amounts of head room, but you would need to be a tall adult to complain, while leg room is really generous.

The boot doesn’t initially look as large as it turns out to be, because the tailgate glass is a bit more upright than the body with it open, but it’s still 545 litres with the rear seats in place. Plus there’s a flat load floor and remote releases for the split-folding rear seats. We’re told a washing machine will fit in, even with the rear seats up. 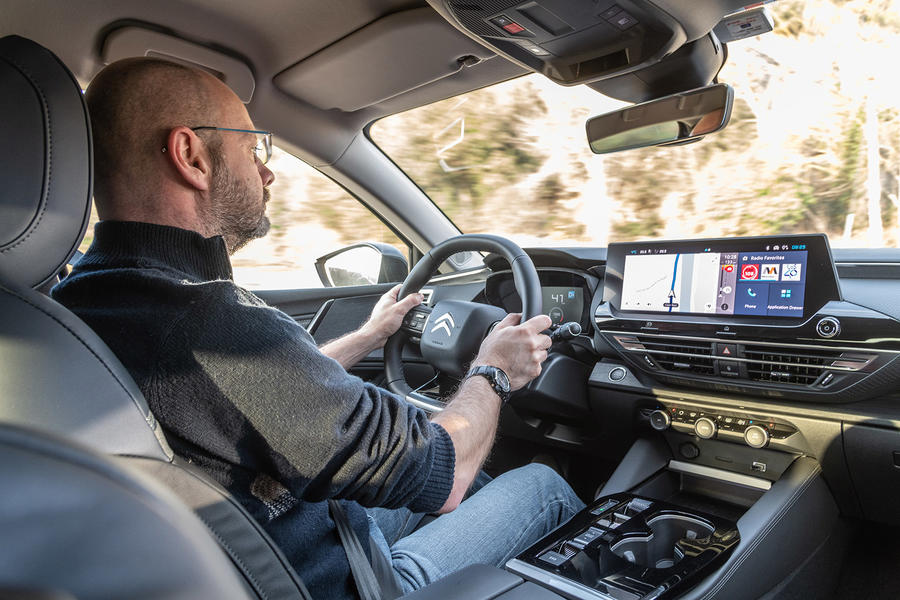 Having driven both the PHEV and the 130, I prefer the petrol-only car.

The PHEV is refined, no question. As you would imagine, it’s incredibly quiet around town in electric-only mode, and cabin isolation and bump absorption are spot on. As with some other Citroëns, though, I find the control weights – and steering response – curiously light and non-linear to the extent that you have to force yourself to be too gentle with it not to upset it. Coming to a stop without a secondary wobble is hard. Things settle down once there’s some load on it; it’s just the first initial movements that are hyper-sensitive. I find cars like the Toyota GR86, say (I know they aren't rivals), less tiring even though they’re much noisier and firmer and way less isolated, because l know what I’m going to get.

The 130, though, feels much better. Perhaps it’s the 1418kg rather than 1722kg kerb weight, but ride isolation is just as good, while the responses are both keener, because it’s lighter but also more predictable and with less bouncy response.

Perhaps obviously the drivetrain is noisier, with the eight-speed automatic gearbox notably shuffling more and the engine thrumming hard but mutedly as it tries to generate enough oomph to drag a duvet off of a bed. But it turns really nicely, with the sort of poise and response that wouldn’t be out of place in a big Ford, yet with much lower noise levels and a genuine sense of plushness.

The C5 X is a harder case to make as a company car, no question, which is where the majority of big family cars find buyers, because it officially emits 136-154g/km of CO2, rather than 30-34g/km.

Whether either finds the kind of market traction that previous big Citroëns failed to remains to be seen. Was it hard to convince the board that Citroën should make it at all? “It would have been a different argument to win if we didn’t have China,” Cobée tells me, because they like a big Citroëns over there. “We sold 12,000 in four months there,” and Chengdu is where it’s made.

The fact that the Chinese are moderately keen on big Citroëns with a novel take means we also get one of the more interesting cars that’s “not a traditional, low-riding three-box saloon” in a segment once dominated by them.

Particularly in ICE form, the C5 X is a rather easy car to rub along with. 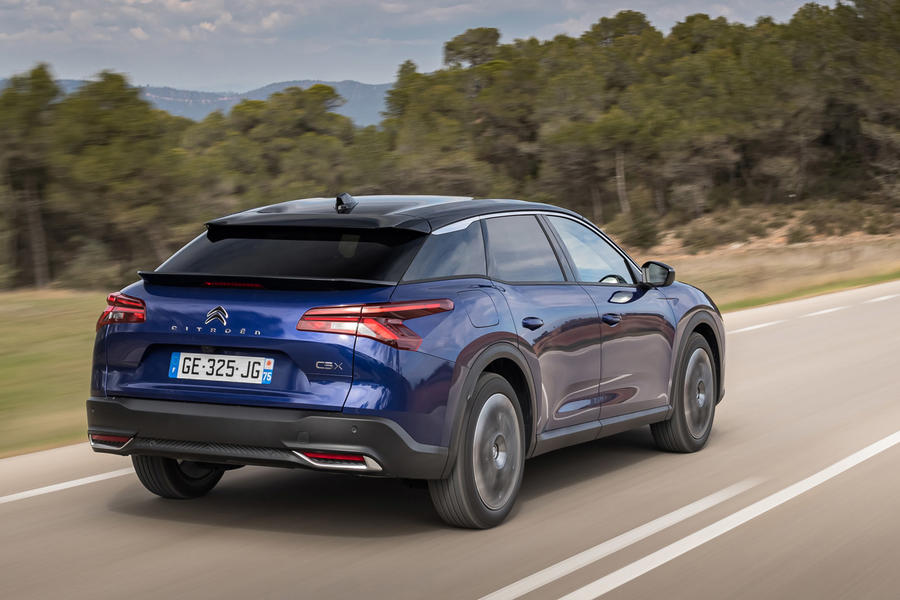