From £30,4158
Share review
How well does petrol power and front-wheel drive suit the new BMW X2? We try it out on UK roads to find out
Share
Open gallery
Close

A hatchback? An SUV? Depending on the angle you look at the new BMW X2 from, there are easily identifiable signs of both very much present in its design. Whatever your thoughts on its appearance are, though, you have to acknowledge that BMW has a bit of an uncanny knack when it comes to sniffing out space for an entirely new model niche within its ever-expanding line-up.

This isn’t the first time we’ve had a go in the X2 here on UK roads. Earlier this year, we tried one out in four-wheel-drive, diesel-powered xDrive20d guise and were impressed with its poise, pace and handling dynamism. Now, we’re getting behind the wheel of the sDrive20i model, which loses a driven axle and ditches its oil-burning engine in favour of a (marginally) more powerful four-cylinder petrol.

That powerplant displaces 1998cc, and develops 189bhp from 5000rpm, while its 207lb ft is available from as low down the rev band as 1350rpm. This is all sent exclusively to the front wheels (optional 20in alloys wrapped in 225/40 Pirelli P Zero rubber on our M Sport test car) via a seven-speed twin-clutch auto ’box. Stiffened and lowered M Sport suspension is also thrown in the mix for good measure. 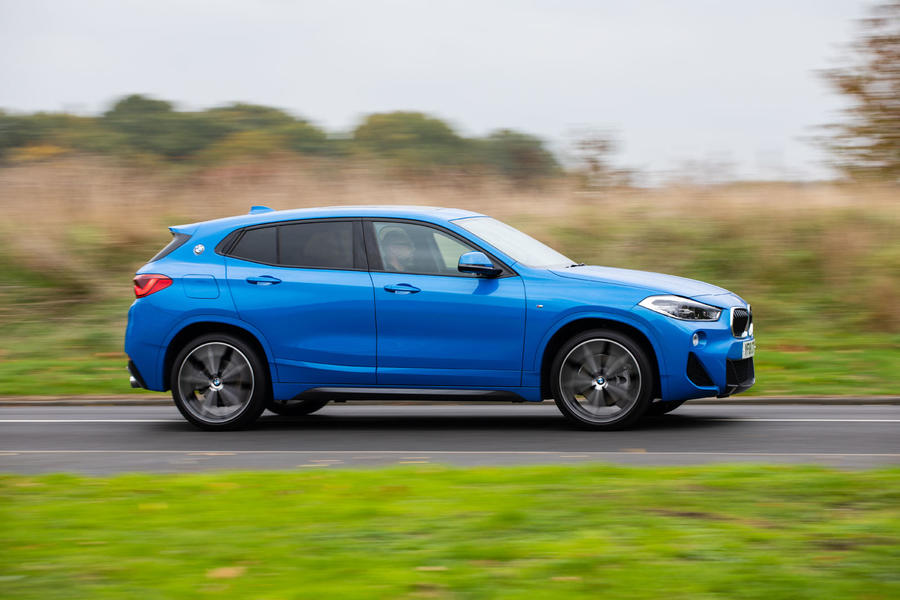 Actually really rather enjoyable. The X2 may not quite display hot-hatch levels of agility or body control but, given its shape and size, the level of dynamism on offer here is to be commended.

I don’t think you’ll really feel as though you’re missing out on anything for being a driven axle down compared with the diesel X2, as there are still impressive levels of grip to be found here. You can can certainly lean on the BMW’s front end much more than you can in other crossover-type vehicles, and you’ll have to be travelling at a noticeably quicker pace before the tyres give up the ghost and wash into understeer. Even when this point arrives, the manner in which traction is broken is gentle and easily manageable; a lift of the throttle will not only drag the X2’s rather pointy-looking nose back in towards the apex, but you can feel the rear of the car gently rotate in a corrective fashion too.

It then adds into this mix steering that’s best described as athletically weighted and, at 2.6 turns lock-to-lock, reasonably quick; impressively controlled lateral roll; and a transmission that responds reasonably keenly to your inputs when controlled via the paddles. It’s a tidy little package, this.

The four-cylinder petrol motor suits the X2 well too. It might not be hugely characterful, but it pulls strongly from just below 2000rpm with acceleration being delivered in a tidy, linear fashion. Select Sport mode and drive hard enough and you’ll also notice a fruity - though reasonably faint - parping noise from the exhaust on upshifts. Out on the motorway, it’s largely unintrusive, and there’s enough torque on offer for in-gear overtakes to not be too much of a lengthy, drawn out affair. So what are the caveats? Well, the stiffened suspension and larger alloy wheels with their reasonably low-profile tyres don’t make for a secondary ride that’s easy to get particularly excited about. While the X2’s primary ride characteristics are certainly tidy - compressions are ironed out in a firm but not unforgiving fashion - ruts and bumps are a touch too sharp for the BMW to be considered remarkably comfortable. The front axle seems to have a tougher time of dealing with these intrusions than the rear, which to its credit manages to feel reasonably settled most of the time. Road roar is a bit of an issue at speed, too, and the 27mpg economy figure we recorded during our time with it isn’t outstanding.

As for the cabin, while it exudes the sort of upmarket material and visual you’d expect from what is a £35,040 mini-SUV, its smaller footprint and lower roofline does make for a second row that can at times feel a touch on the tight side. Head room isn’t particularly generous, and neither is leg room - at least for an adult. 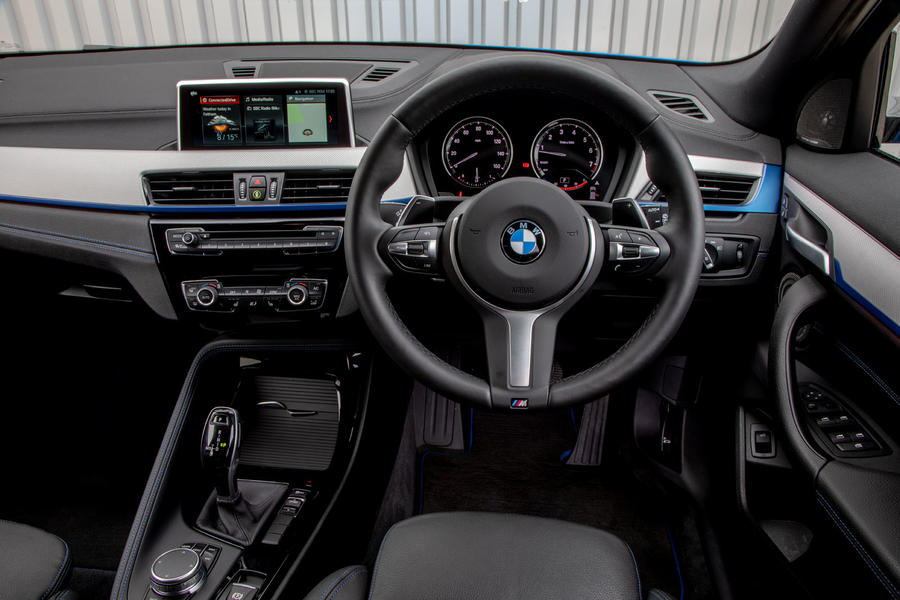 To its credit, the BMW X2 takes a good shot as dispelling the idea that crossovers have to be inherently worse than the hatchbacks on which they’re usually based. Not only does the X2 look rather sharp, it drives well and has comparable levels of practicality to, say, a 1 Series (its boot has 470 litres of space versus 360 litres in the hatch).

The more sceptical among us might view BMW’s ability to seemingly pull new vehicle niches out of thin air in a negative light. At least - in the case of the X2, anyway - when it does, BMW does a pretty good job of it. 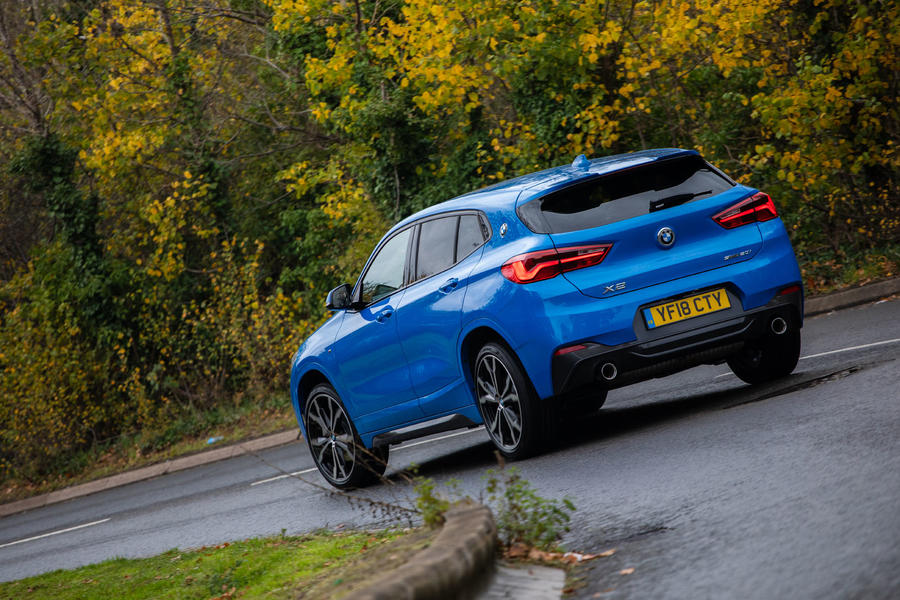 My god, what a mess.  Who on earth did BMW have in to design this thing, it's a pig in a wig!  It shows nothing to an E-Pace or Evoque, the only truly premium offerings within this segment.

I can only assume the tester was under the influence of some psychedelic chemical from reading the review of the interior, it's simply not a patch on the premiumness of the interiors found in JLR's class leading offerings.  It's also clearly underpowerd, what a desperate attempt at an enigine and powertrain, The Ingenium offerings found in JLR's class leading products is a premium engine, best in class.

A pitiful and wretched offering from the Boche.

My god, what a mess.  Who on earth did BMW have in to design this thing, it's a pig in a wig!  It shows nothing to an E-Pace or Evoque, the only truly premium offerings within this segment.

I can only assume the tester was under the influence of some psychedelic chemical from reading the review of the interior, it's simply not a patch on the premiumness of the interiors found in JLR's class leading offerings.  It's also clearly underpowerd, what a desperate attempt at an enigine and powertrain, The Ingenium offerings found in JLR's class leading products is a premium engine, best in class.

A pitiful and wretched offering from the Boche.

That made me chuckle. I don't think the tester is the one under the influence...

Congratulations, you have just been elected Troll of the Day!

I wonder what Simon Davis did

I wonder what Simon Davis did wrong to be made to review this?

One of BMW's best designs in

7 November 2018
One of BMW's best designs in years. The interior is the usual fussy mess though.

So its nearly as good as a 1 series

Thirty five grand for a slightly jacked up FWD hatchback.  Wow.  People really will pay for any old crap wont they.

Okay - I'm sure its better than - say - a Dacia Duster, but worth three times the price? No.

So its nearly as good as a 1 series

My wife has a 220i Gran Tourer - same platform and engine (?) but with a proper TC auto box and much more room inside. Sadly virtually the same confusing dashboard, too! I find the iDrive wilfully confusing.

Test drove one a few months ago

and although it’s not a bad car, the one I test drove had a rrp of just over £42,000. Bearing I mind it’s basically a mini with bmw styling, that is just a ridiculous price (luxury car tax applicable). It was also not that good on uneven road surfaces, pulling one way or another and had a few rattles even though it had only done 260 miles from new. 8 speed auto was very good though, shame about the rest of it.

Looking to buy this in 1.5 auto form early next year. Apart from the price, the only issue I have is BMW's choice of equipment on the X2. Yes it comes well specified in standard form, but lot of that I'm not interested in (power tailgates etc).  But essential things to me like electric folding mirrors, well they're not really an option. For the X2 BMW seem to have replaced options with packs, so even on this £35k car, you simply can't add another £200 or whatever for folding mirrors (which should be std anyway), you can only get them as part of a £700 pack - in otherwords more junk that I don't want.

And although I don't require text msg to be read out or just displayed on this particular car, it's not even an option. The infortainment won't display them nor is Android Auto an option.

When it comes time to change, I'll probably end up with an X1 because the X2 is so much more expensive.