This is it, then. The first-ever electric-powered BMW M model. Given the outstanding pedigree of the German firm’s performance-oriented combustion models down the years, much is riding on the i4 M50.

Based on the upcoming second-generation BMW 4 Series Gran Coupé, alongside which it is produced in Munich, the powerful new four-door saloon joins the BMW i3, BMW iX3 and recently-introduced BMW iX in what will become a 12-strong line-up of electric models under BMW’s i sub-brand by the end of 2023.

The £63,905 M50 is one of two initial i4 models planned for sale in the UK from November. Along with the milder, £53,405 rear-wheel- drive eDrive40, it will challenge the Porsche Taycan and Tesla Model S, as well as the upcoming Audi A6 E-tron and Mercedes-Benz EQE, for four-door electric car supremacy. Like the new iX, the i4 is based on an adapted version of BMW’s CLAR platform. It has been heavily modified to accommodate an electric powertrain, which includes a large battery bolted to the floorpan. This acts as a structural element, providing the body with added stiffness and helping to maintain a 50:50 weight balance.

In its styling, the i4 is close to the look of the concept revealed early last year, with traditional cab-backward proportions and only detailed changes setting it apart from the 4 Series Gran Coupé. These include a blanked-off grille housing ultrasonic and radar sensors, a uniquely styled front bumper with minimal air ducting and thin LED headlights that form a tapered effect within a bold-looking front end.

Further back, there are new touch-sensitive door grabs, aerodynamically optimised wheels ranging from a standard 17in diameter on the eDrive40 to an optional 20in on the M50, a unique rear bumper housing an i4-specific diffuser and, for the range-topping M model, a subtle rear spoiler lip. Dimensionally, the i4 is 76mm longer, 25mm wider and 6mm taller than the current 3 Series saloon, at 4785mm, 1852mm and 1448mm respectively, with a 4mm-longer wheelbase of 2856mm.

Inside, a free-standing curved display houses 12.3in and 14.9in digital screens for the instruments and infotainment system atop a lightly modified dashboard from the 4 Series Gran Coupé. It is all controlled via a new eighth- generation iDrive system, which supports a new ‘Hey BMW’ voice activation function as well as new customisable features. There is also Apple CarPlay and Android Auto smartphone mirroring and a new over-the-air function that can update software via an embedded 4G SIM card. The air-con controls, meanwhile, are easily accessible via the infotainment system.

The rest is more typical M-car fare. There’s a thick-rim leather-bound multi-function steering wheel; the driving position is not quite as low as we’re used to on more sporting BMW models, but the standard front sports seats provide plenty of support and electronic adjustability; and a broad centre tunnel running through the interior forms the basis of a control panel that features a rather conventional gearlever in place of the slider mechanism used by the iX along with driving mode controls and a rotary controller for the iDrive system.

Accommodation up front is quite good, although it’s compromised in the rear by a raised floor, required for the packaging of the battery, and a sloping roof line that robs head room. Boot space, meanwhile, is put at 470 litres, extending to 1290 litres when the split folding rear seats are stowed. Unlike a Taycan, there is no provision for luggage storage under the bonnet. 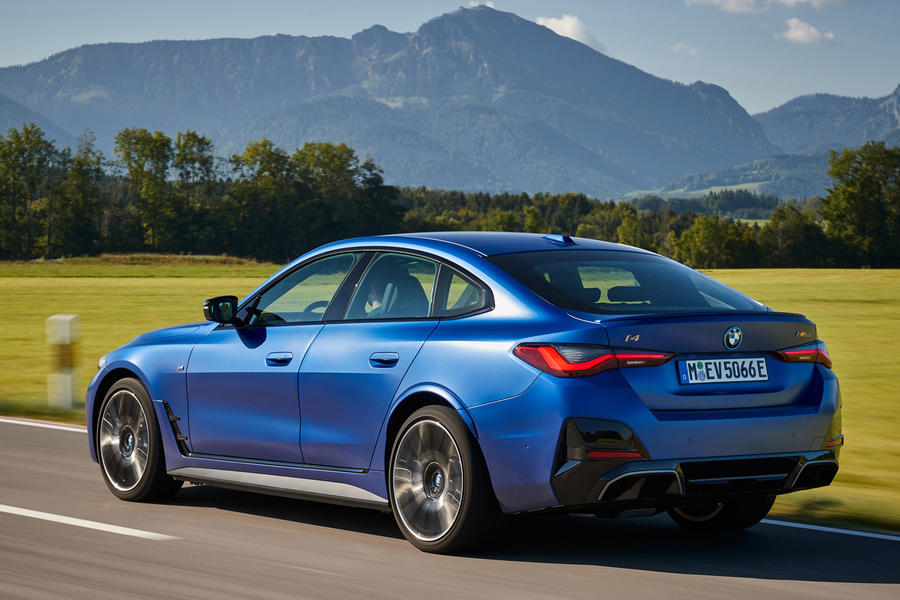 There is a familiarity about driving the i4 that will no doubt appeal to existing BMW owners. The controls and operation of many interior features are very similar to those of the marque’s combustion models.

The throttle calibration is sweetly balanced, mating excellent pedal weighting with a good degree of sensitivity. In combination with the responsive nature of the electric motors, this makes for engaging properties even at lower speeds in an urban environment in Comfort mode, where the M50 operates almost exclusively in rear-wheel drive using its rear motor alone.

However, it’s at higher speeds on the open road where the i4 really comes alive. Here, the powertrain combines the efforts of both motors to deliver rapid four-wheel-drive performance. Despite the motors being asked to haul well over two tonnes, the i4 proves very rapid when dialled into Boost mode. So configured, it is claimed to crack 0-62mph in just 3.9sec.

This isn’t at quite the same level as the 3.5sec-to-62mph M4 Competition, owing partly to the inertia involved in setting the heavy EV into motion, but it is in line with the 3.8sec time of the Taycan S. Once it is off the line and the electric motors are spinning within the 8000-17,000rpm peak power range, the roll-on acceleration is extremely determined on a loaded throttle.

The decision to use single-speed gearing has produced great smoothness and linearity. However, the overall rate of propulsion begins to tail off as your prevailing speed increases above typical motorway limits and rolling resistance and aerodynamic drag build.

The fully variable four-wheel drive system provides outstanding traction in combination with the optional 255/30 R20 Pirelli P Zero tyres fitted to our test car. The newly developed set-up is integrated with the chassis control system and also provides a torque-vectoring function to vary the amount of drive delivered to each rear wheel. 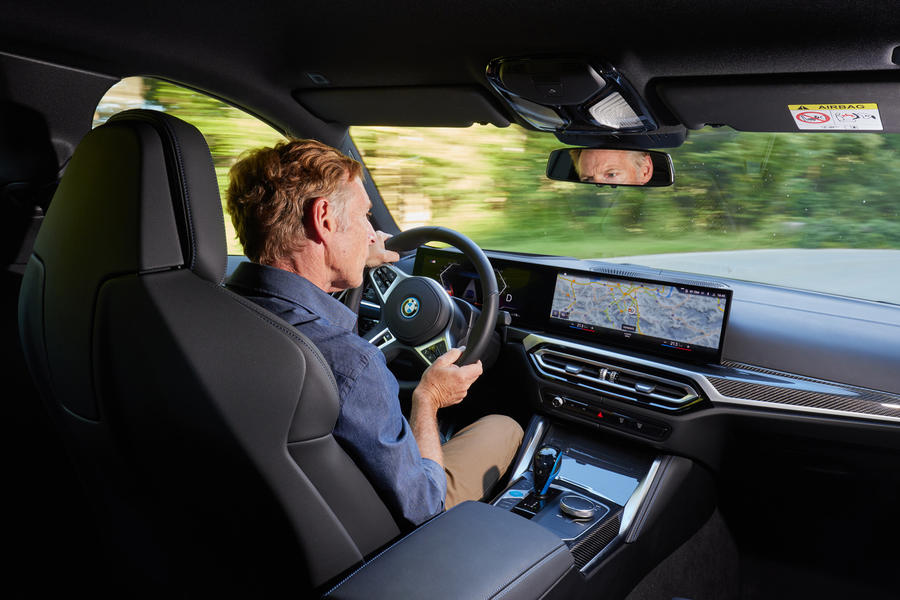 The MacPherson strut front and multi-link rear suspension of other new 4 Series Gran Coupé models is combined here with unique rear air springs, variable damping control and 26mm-wider front and 12mm-wider rear tracks. There are also extra bracing elements within the engine bay and at the rear to help stiffen the body structure. The ride height has increased by 20mm over the ICE version as well.

You don’t get quite the same incisive steering response as in other M models but the handling, most notably the way the M50 controls its weight when hustled through a series of challenging corners, is very good. There is an inherent eagerness to the car’s dynamic properties in Sport mode that should appeal to enthusiast drivers.

The four-wheel drive system is programmed to deliver predominantly rear-wheel-drive qualities via the rear motor and you can feel the torque- vectoring effect of the electronic rear differential in all-out cornering. But with the front motor also sending drive to the front wheels, any tendency towards oversteer is quickly quelled by the i4’s lightning-fast reaction to wheel slippage.

The result is agreeably neutral characteristics with assured mid-corner purchase and, with all that torque on tap, exceptionally strong drive at the exit.

Our car’s ride was quite firm on the optional tyres. However, the combination of conventional coil springs up front and air springs at the rear delivers sufficient spring travel and compliance to ensure it is never harsh over broken bitumen or undulating roads in the more forgiving driving modes.

The battery recuperation system, which harvests kinetic energy when you lift off the throttle or apply the brakes, is controllable through two settings via the gearlever. The standard ‘D’ (Drive) mode activates adaptive recuperation that varies between coasting and light braking according to the topography of the road and surrounding traffic, while the ‘B’ (Battery) mode favours even more heavy braking for maximum energy recuperation. A menu integrated into the infotainment system allows you to alternate between light, medium and high – the last of which provides the basis for one-pedal driving where the i4 pulls up quite smartly all by itself when you lift off.

Brake pedal feel is outstanding by electric car standards, with an impressive balance between regular friction braking and recuperative braking. 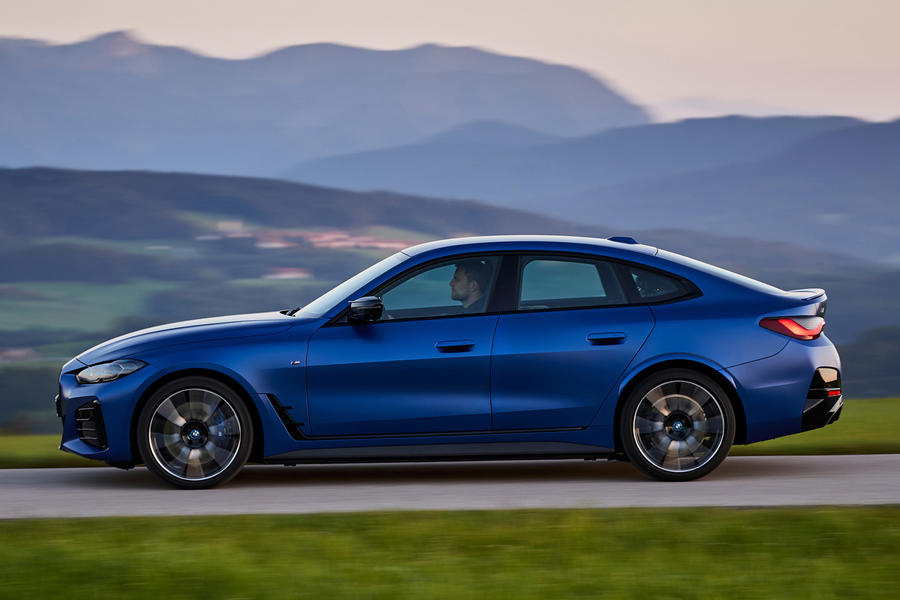 The key attractions to the M50 are its strong performance and engaging dynamic ability. It is an electric car that will appeal to those who delight in driving and seek a sense of sportiness, at least when it is running in Boost mode, where it calls on its combined reserves with four-wheel drive and proves to be very quick and engaging on the right road.

The real achievement is that it manages this while being highly refined and relaxing when you dial up Comfort and glide along at typical motorway speeds in rear-wheel drive exclusively on the power of its rear-mounted motor. This dual character provides the headlining i4 model with broad driving appeal, even if it fails to deliver true five-seat accommodation owing to BMW’s decision not to base it on a dedicated electric car architecture. 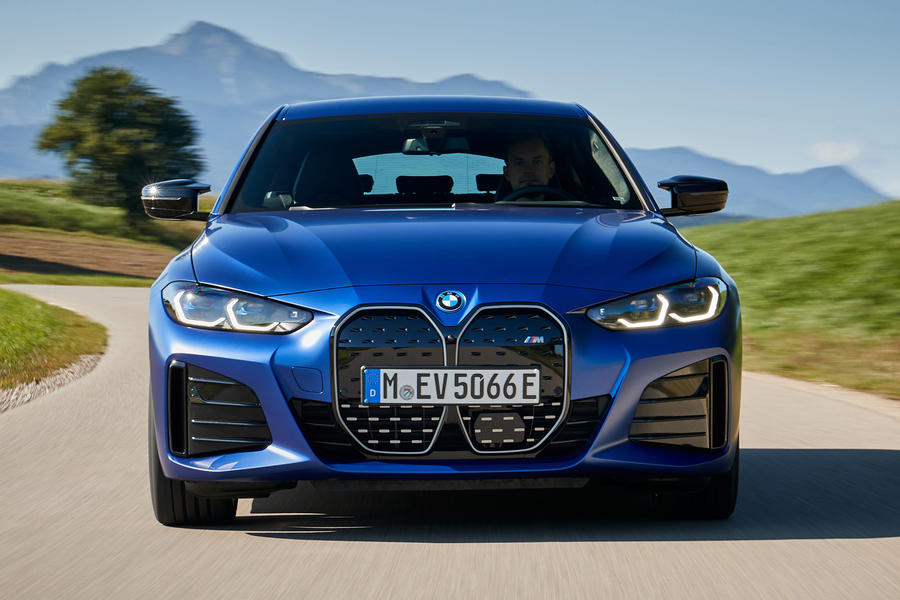