6
The diesel-powered version of the 2 Series Gran Coupé tries – and ultimately fails – to hide the fact that it's front-wheel drive. But for the target audience, we suspect it won't be an issue
Close

Behind strange looks is a well-engineered car, but a confusing one

It's not long since the idea of a front-wheel-drive BMW would have been regarded as heresy, not least within the company itself. But now the lower reaches of the family are rapidly filling out with models that pull rather than push.

The 2 Series Gran Coupé follows on from the X1, X2 and 1 Series hatchback, sitting on the same FAAR natively front-wheel drive platform and powered by a range of transversely mounted four-cylinder engines, with the 220d set to be the sole diesel offering at launch.

It slots in beneath the 3 Series as BMW's baby saloon for Europe, with a coupé-inspired rear end, four doors and more leg room than the 2 Series coupé, which stays on a rear-wheel drive platform.

While the range-topping M235i delivers its 302hp through a part-time four-wheel drive system, the 220d and entry-level 218i will be front drive only. The 220d's engine is a transverse version of the twin-turbo engine that we've already seen in the 320d and 520d, making 187bhp and 295lb ft of torque. Here, it's able to manage 0-62mph in 7.6sec via an eight-speed automatic - the diesel's only gearbox option. 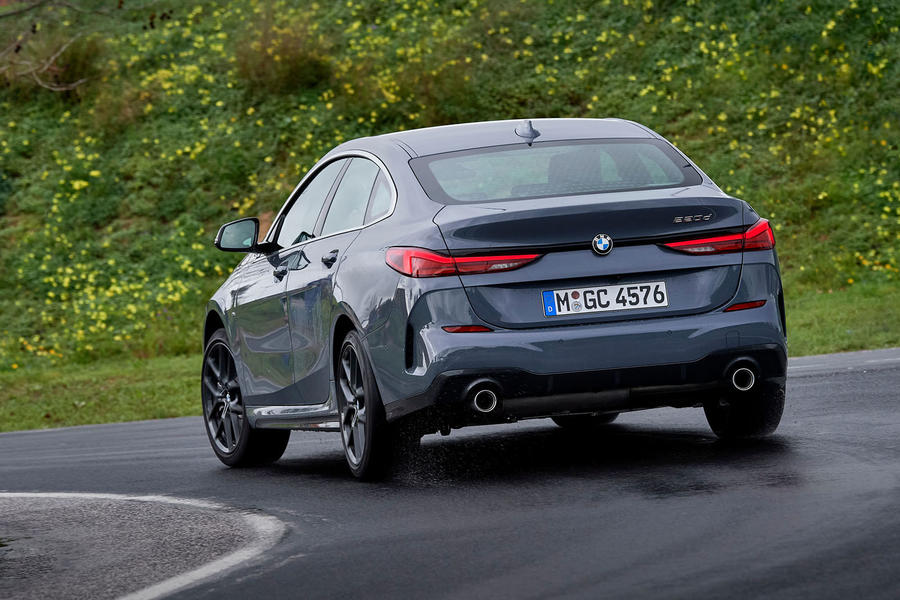 A sports commentator would describe what we've got here as being a game of two halves. Driven at an everyday pace, the 220d Gran Coupé feels familiar, delivering a good impression of a more traditional rear-driven BMW. It feels respectably agile and willing to turn, steering is close in terms of both weight and response to that of a 3 Series and performance is respectably brisk.

The diesel engine thrums a little more than we remember it doing in the outstanding 320d, but it is still acceptably quiet under all but the hardest use. Part-throttle acceleration is impressively strong, the engine delivering solid shove without seeming to break sweat as the automatic ’box shifts deftly to keep the motor in the muscle of its mid-range. Taking manual control through the steering wheel paddles confirms that there is no point in taking the engine beyond the 4000rpm where it delivers peak power, although it will pull cleanly to the limiter.

The base chassis settings are soft, with the Gran Coupé picking up a fair amount of vertical motion over rougher surfaces. The test cars we drove in Portugal were in non-representative spec, wearing optional adaptive dampers that won't be offered here; in Sport mode, these increase discipline without adding harshness, but we will have to wait to see how firm the standard setup is. Cruising refinement is good, with the cabin staying well insulated at what would be a rapid motorway cruise and little wind noise despite frameless doors.

It's when pressed harder that the 220d starts to struggle. On sodden road surfaces, the Gran Coupé's front-wheel drive soon becomes obvious. While BMW is rightly proud of the 2 Series' battery of understeer-fighting systems, including quick-acting traction control derived from the system fitted to the i3, these can only do so much. Hard acceleration at lower speeds have the driven wheels battling for traction, and although there is rarely any sense of torque corrupting the steering, even modest exuberance produces strong and obvious intervention as the stability control battles to stop the front from running wide. BMW'ss rear-drivers would doubtless have struggled for grip in the same conditions, but the fight would have been a more amusing one.

Of course, for many potential buyers, the on-the-limit handling of a diesel 2 Series Gran Coupé will be a peripheral concern, and there is still plenty to like about this compact saloon. The cabin feels impressively well finished and equipped for the price point, with much of the switchgear and componentry shared with models far higher up the range. The driving position has lots of adjustment and, although tight on head room, rear seat space is still reasonable, given the car's dinky overall dimensions. 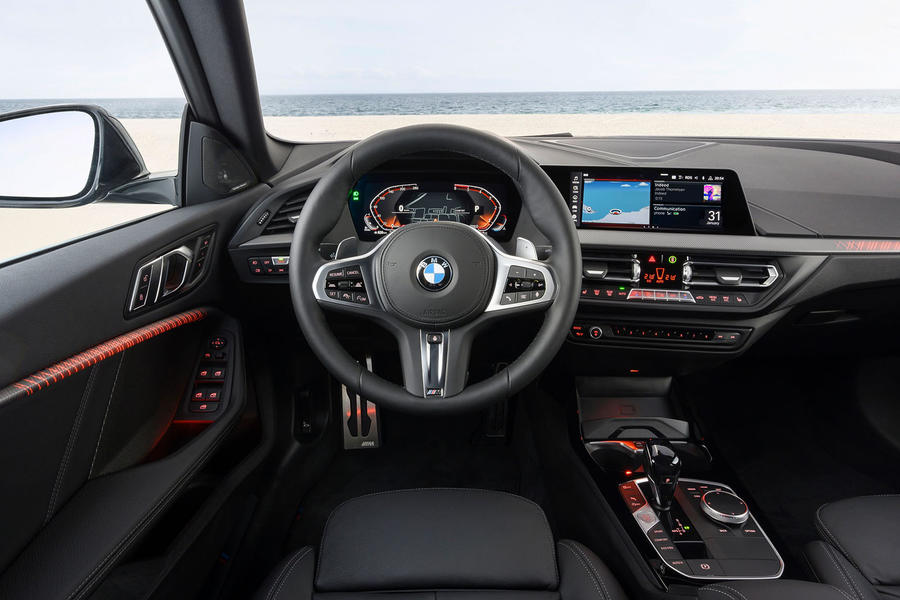 BMW reckons that the entry-level 218i will be the most popular version of the Gran Coupé – probably a realistic assessment of the relative importance given to the car's sleek looks (and badge) over ultimate driving manners. Yet the 220d does still make a solid case for itself, thanks to what remains one of the best four-cylinder diesel engines on the market.

This is a car able to deliver both a 0-62mph time under eight seconds and gentle use fuel economy in the high-50s; that remains an impressive combination of talents. The tougher question is how it will compare with the Mercedes CLA 220d, which we reckon is one of the highlights of its range and is certainly a more elegant proposition. 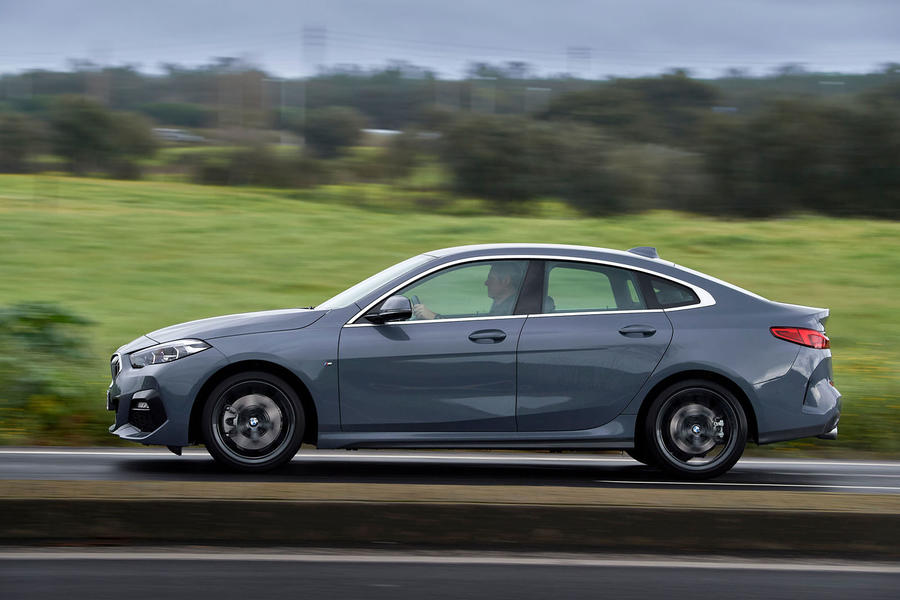 Pity about the review

The fact remains the majority of car drivers DONT push a car to its limits so why labour such things? Im seriously considering this car as I down size from the excellent 520D (current car). The Mini my wife has and it drives extremely well and its front wheel drive. Where BMW "fails" is in not offering variable dampers across the range this is always "first" on my shopping list. Why BMW UK has not offered this is a joke particularly as it always wants to push larger wheels that ruin comfort we not all racing car drivers. If I test drive and its uncomfortable then the CLA is going to be my choice.

19 February 2020
Grey looks better than white but still can't hide the detailing that ruins the cars styling, like the rear, lights, small rear arch etc. Sounds like a good drive with a good interior and while apparently being less fun running out of grip in this fwd car compared to their rwd cars, who in reality will care? Maybe the fwd grip in the wet issues will be less noticeable with a less torquey petrol engine?

Grey looks better than white but still can't hide the detailing that ruins the cars styling, like the rear, lights, small rear arch etc. Sounds like a good drive with a good interior and while apparently being less fun running out of grip in this fwd car compared to their rwd cars, who in reality will care? Maybe the fwd grip in the wet issues will be less noticeable with a less torquey petrol engine?

Trust me the interior is no more than average. Looks are a matter for the owner but to me its nowhere near as well resolved as the CLA.

Well at least we know the

Well at least we know the important stuff- that the car is no more capable than RWF but 'less amusing' on the limit.

Back in the real world my wife was considering this the X2, XC40, GLA, CLA and 3 series. Contrary to the article the interior isn't anywhere near as well finished as the 3 and the exterior is nowhere near as nice as the CLA - I suspect that it was designed very much with China in mind.

KIA are on the way

19 February 2020
I laugh when people talk about BMW quality. For the last few years the quality had been no better than many 'upper mainstream' brands like VW or Volvo. KIA are really upping the quality as are Hyundai and with their pricing BMW will be irrelevant.

I laugh when people talk about BMW quality. For the last few years the quality had been no better than many 'upper mainstream' brands like VW or Volvo. KIA are really upping the quality as are Hyundai and with their pricing BMW will be irrelevant.

Very good point. Go look at the carpet in the current MINI range. It’s shocking. Like out of a Kia two decades ago. It’s not even real carpet!! Cost cutting everywhere!

KIA are really upping the quality as are Hyundai and with their pricing BMW will be irrelevant.

Yes I am sure BMW are scared!

Perhaps, only perhaps, this question is the pinnacle of your obvious stupidity, there is no lowest limit to you plumbing the depths of idiocy. Amusing though and keeps us all going.

Mike Duff - this is NOT a