From £22,0609
Front-driven 1 Series may not drive like a traditional BMW but otherwise delivers on upmarket family hatch values
Open gallery
Close

It’s the all-new (and here comes the controversy) front-wheel-drive BMW 1 Series in its likely best-selling form. We’ve known this change in mechanical layout has been on the cards for a while now. We’ve even had the chance to sample a pre-production version and came away impressed. Even so, it’s taking some time to come to terms with the seismic philosophical shift under the skin.

Yet is it as bad as all that? Not only did most BMW 1 Series customers (85% by the brand’s own count) not have the foggiest whether they were being pushed or pulled, the lower-powered models weren’t all that invigorating in reality. Sure, steering uncorrupted by torque fight was nice but, in general, most versions had much more grip than grunt, making it difficult to exploit the unique-to-the-class transmission layout.

Underpinning the new 1 Series is BMW’s latest FAAR (it’s essentially an acronym for an extremely difficult-to-pronounce German phrase for ‘front-wheel-drive architecture’) platform. Featuring struts at the front and a multi-link rear axle, it also comes with optional adaptive dampers for the first time. Using a mix of aluminium and high-strength steel, the whole car is around 25kg lighter than the model it replaces and the wider track and 20mm-shorter wheelbase hint at the extra agility BMW claims to have engineered in.

Power comes from the familiar 148bhp 2.0-litre four-cylinder diesel, which drives the front wheels (there, said it again) through a standard six-speed manual gearbox, although our test car has the optional eight-speed automatic. Lower-powered petrol and diesel models are also available with a self-shifter, but just to make things a little less straightforward, it’s a seven-speed dual-clutch gearbox.

Inside is the latest high-tech iteration of the traditional driver-focused BMW wraparound dashboard. There’s the usual array of screens, with our car’s optional 10.25in (an 8.8in layout is standard) infotainment display accessed via either the touch-sensitive screen or the intuitive iDrive rotary controller. There’s also a familiar line-up of connected and live services, plus the effective ‘Hey, BMW’ voice control that mimics a similar system used in the Mercedes-Benz A-Class. And, of course, quality is top notch, with details such as the knurled metal-effect ventilation controls and top-to-bottom use of soft-touch materials bostering the car’s premium credentials.

It’s also more spacious than before, with an extra 33mm of leg room and 19mm of head room, making the 1 Series a viable choice for four tall adults for the first time. And the larger, 380-litre boot (up 20 litres) means they can all bring along their luggage now. There’s more elbow room all round, too, so those in the front don’t feel as hemmed in. 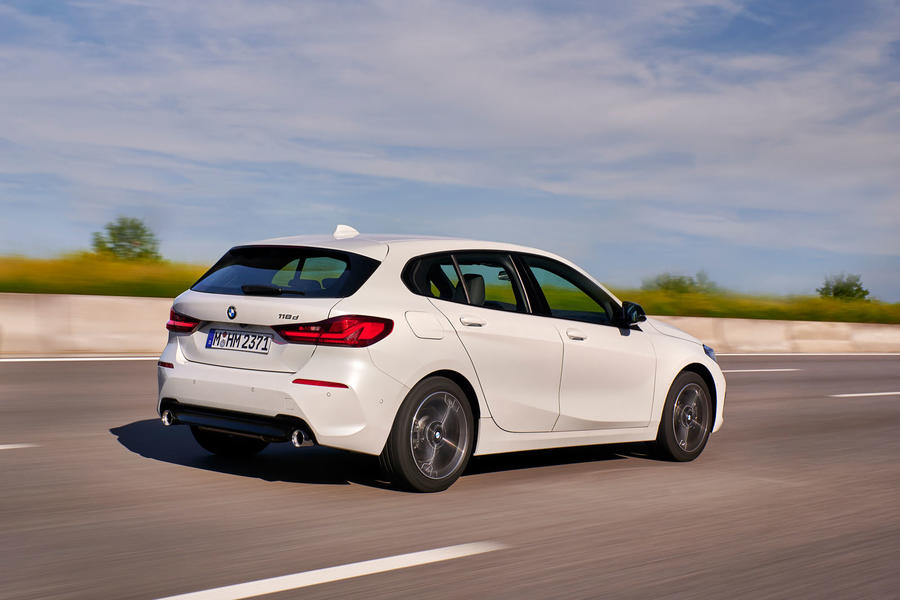 The good news is that there’s some fun to be had here, even if it doesn’t exactly feel like a BMW. Move off and the 118d initially feels very familiar. You sit low in the car and the steering is light and positive, with a natural rate of response. And even on our car’s optional adaptive dampers (you can choose between Comfort and Sport), there’s a reassuring tautness to the ride.

The 148bhp 2.0-litre four-cylinder diesel is a decent performer, and in this application, it’s more refined than before, with only the occasional tingle through the controls under load at around 2000rpm and a gruffness right at the top end reminding you that it drinks from the black pump. Our test's car optional eight-speed automatic is slick and smooth and, in combination with 258lb ft of torque, it makes for swift and effortless progress.

Find a series of corners and you’re in for a surprise, because the 118d is genuinely good to drive, if not in a traditional BMW way. The front end responds instantly to the quick and accurate steering, the nose diving toward the apex with laser-guided precision, and even when pushing hard, grip is tenacious and understeer virtually non-existent. Instead, it’s the rear of the car that wants to move around, the combination of a grippy front end, well-integrated torque vectoring and trick ESP allowing the car to rotate quickly around your hips. Lift off the throttle and the 118d tightens its line further, creating a real sense of agility.

Factor in the excellent body control (even in Comfort mode) and quick, reasonably feelsome steering, and the 118d slices through corners with fluidity and deftness, the front and rear axles sharing the cornering loads equally and the whole car feeling like it's up on its very tippy toes. No, it doesn’t feel rear-wheel drive, but then it doesn’t really feel front-wheel drive, either. This is a car that tries to deliver on BMW’s passion for creating driver’s cars rather than any rear-wheel-drive dogma.

It’s not perfect, mind. For the most part, the steering is uncorrupted by its need to steer and drive, but accelerate hard in a straight line and there’s a subtle stiffening of the rack just off the straight ahead as you get just the merest hint of torque steer fight. And although the ride is good most of the time, sharp imperfections such as potholes still send a jarring thud through the car’s structure. 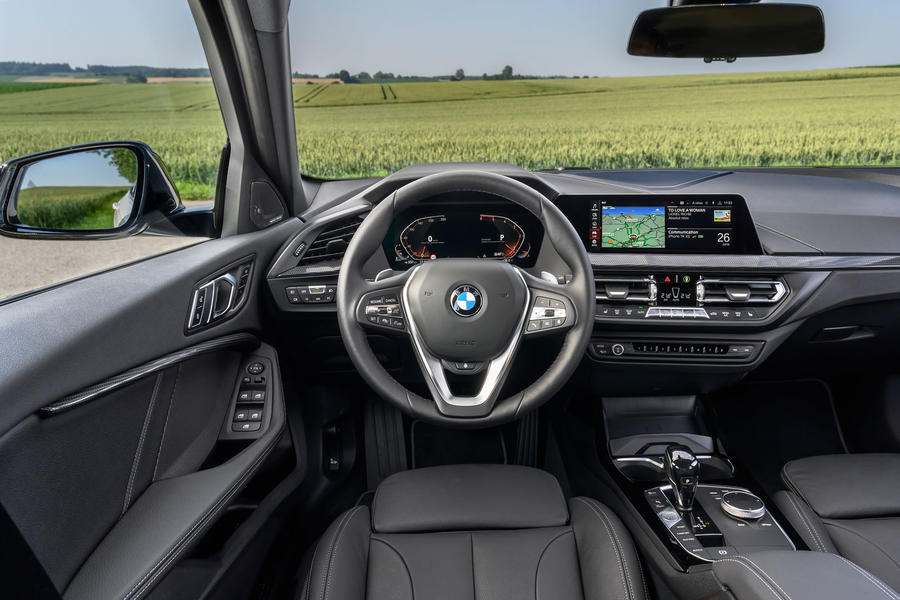 In all objective terms, the 118d is a better car than the model it replaces, delivering greater practicality, comfort, refinement and technology. Sure, it doesn’t drive like you expect a BMW to, but then what do you expect a front-wheel-drive BMW compact hatch to feel like?

Put the whole rear-wheel-drive thing to one side and what you have is an upmarket family hatch that’s fast enough and extremely frugal and has a chassis that knows how to show you a good time.

Slight steering corruption aside, the lower-powered 1 Series models are more involving and agile than most models in this class. We’ll have to wait until we can line it up against its rivals to deliver the definitive verdict, but the initial signs are very promising. 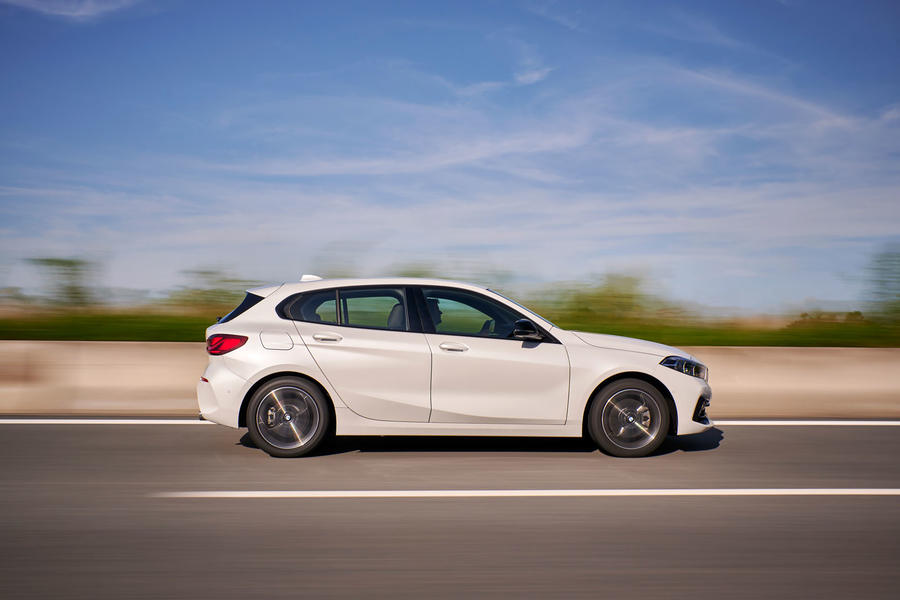 Is it me or does the front end look like a Kia?

Exterior styling is poor, but I am ok with FWD as the previous model did not offer much in the second row.

RWD traditionists will reject this 1 series.
Those who care about looks will likewise give this a miss.
And premium manufacturers can nolonger claim better build quality and higher grade materials in their mass market cars.
I really can't make a case for this or the A class or the Audi A1 / A3
catnip 17 July 2019

RWD traditionists will reject this 1 series. Those who care about looks will likewise give this a miss. And premium manufacturers can nolonger claim better build quality and higher grade materials in their mass market cars. I really can't make a case for this or the A class or the Audi A1 / A3

But surely, how could you resist one of those 3 wonderful badges on your driveway for your neighbours to envy.......