This alludes to the various sensations – some unmissable, many subtle – that a car gives off between the time you open the door and the moment after you’ve shifted into second gear. This short and uneventful period is, superficially, quite boring, but the reason the process has an informal name is because cars with good handshakes tend to be good to drive across the board and vice versa.

The Birds BMW M140i has an unusually good 50-yard handshake. Anyone familiar with the name Birds won’t be surprised by this, but for those who aren’t, don’t be taken in by the dealership-spec exterior. Underneath it, you will find tweaked suspension geometry, painstakingly revised springs and dampers, BMW’s B58 3.0-litre straight six massaged to release 424bhp and more than 400lb ft (all warrantied by Birds) and the open differential removed and replaced with a Quaife torque-biasing limited-slip diff.

The point of the endeavour has been not to create some monstrous would-be Porsche-slayer but simply to unfurl the potential of an underwhelming factory-standard effort regarded by many as an opportunity missed. But more so than performance, the new formula is about mechanical involvement, precision handling and improved year-round usability.

Birds now fettles AMGs too, but it has been upgrading BMWs from its base in Slough since the mid-2000s. What makes the previous-generation M140i so pertinent is that it’s among the last sub-M BMWs with rear driveshafts only, three pedals and six cylinders. At the time of writing, it looks likely that the next-gen 2 Series will follow suit, but even the latest 1 Series is now front-driven and four-cylinders-only. Birds’ attempt to buy and convert every F20-gen M140i in the UK dealership network is therefore understandable.

They make fine drivers’ cars, rich in capability and character – if you know how to unlock it. 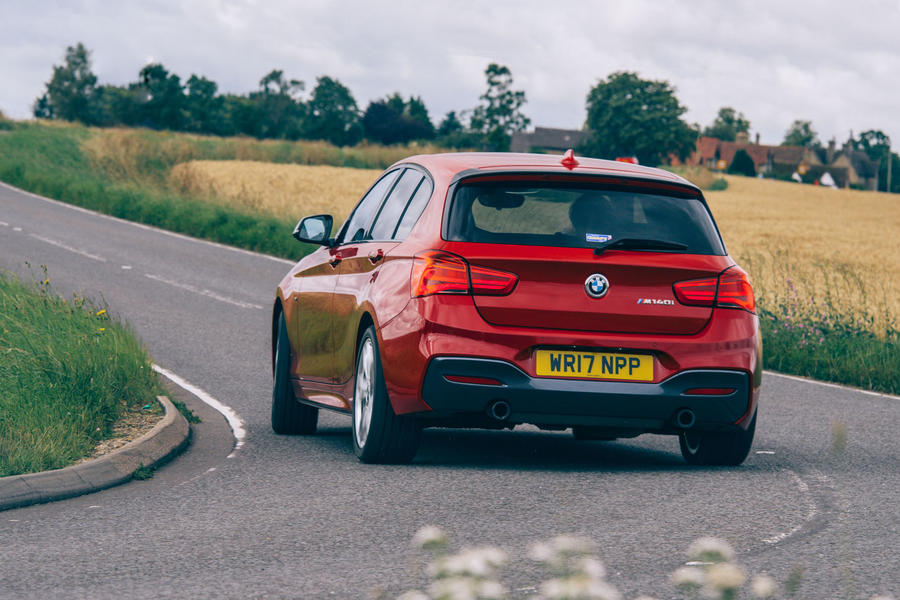 Now, that handshake. The M140i felt underdeveloped as standard, with apathetic controls and a suspension set-up too easily overwhelmed by the engine, and not in the right way.

That’s why this car’s juicily resistive and faintly elasticated gearshift – courtesy of Bird’s own shortshift kit – feels so good when you first depress the clutch (itself weighted up compared with standard) and slot first. If the engine note hadn’t already given the game away, the car then steps off in a manner underwritten by turbocharged torque and which suggests plenty of displacement up front – certainly more than four cylinders could reasonably muster.

Only the steering is a slight disappointment. It still feels light and removed from the road surface, although this improves above 40mph or so. Birds has, however, tempered BMW’s overly generous negative scrub radius, primarily by widening the front track a touch. Negative scrub radius is useful for high-speed stability on fast European roads but makes less sense on British roads, where agility is more important.

The real reason people head to Birds, however, is because of the work it puts into the chassis, and this particular M140i’s taut and controlled low-speed ride augurs well. It’s not unlike that of the new M2 CS, albeit with the reactivity levels turned down a notch or two, so the car at first trundles along with a promising blend of what could fairly be described as ‘soft-edged intent’.

The complete B-Series conversion, as it’s known, consists chiefly of Eibach springs and Bilstein dampers. Each benefits from Birds-spec tuning bespoke to both the M140i itself and, crucially, to one another, and getting such big names in the industry to supply small batches hasn’t been easy. But achieving it has resulted in a passive set-up that, says Birds, is perfectly judged for daily driving with committed B-road interludes.

This claim holds water. For one thing, the engine, with its new and bespoke map, feels fabulous: after an urgent but linear ascent, power essentially peaks at the 7000rpm redline, and yet there’s torque enough to haul you rapidly but lazily out of 30mph villages in fifth gear.

Chassis and body are also far more sweetly in tune with one another than with the original M140i, whose rear axle in particular rarely settles. Apart from causing some discomfort, this hyperactivity saps driver confidence, because the rubber patches through which all of its 335bhp meets the road are constantly shifting in unpredictable fashion.

Birds’ changes are transformative in this respect, and through faster sweepers there’s the palpable sensation of the rear suspension uniformly kneading the wheels down into the road as the hatchback body remains supple but controlled above it. The car’s rebound damping is especially impressive, and so crests, potholes and corrugations don’t jaggedly disrupt your enjoyment.

All of this provides the canvas for the car’s party-piece, which is the work done by the Quaife LSD in conjunction with solidly dependable but relatively ordinary Goodyear Eagle F1 tyres. Lateral grip levels aren’t massive – they’re still comfortably inferior to those of an M2 Competition – but it doesn’t matter, because the way the rear axle behaves is so neat and predictable.

Through second and third-gear corners, the differential tenses up in such a way that not only is drive preserved on either side of the car but also the driver has an instinctive and unusually well-defined awareness of the limits of grip and traction.

You can therefore choose to nudge right up against that point, or you can push through it – and the latter you can do either with incrementally more throttle or lots more throttle. It doesn’t matter, because the ensuing slide develops naturally and cleanly and, incidentally, without any real understeer to speak of beforehand. How does it all feel? In a word: wow. 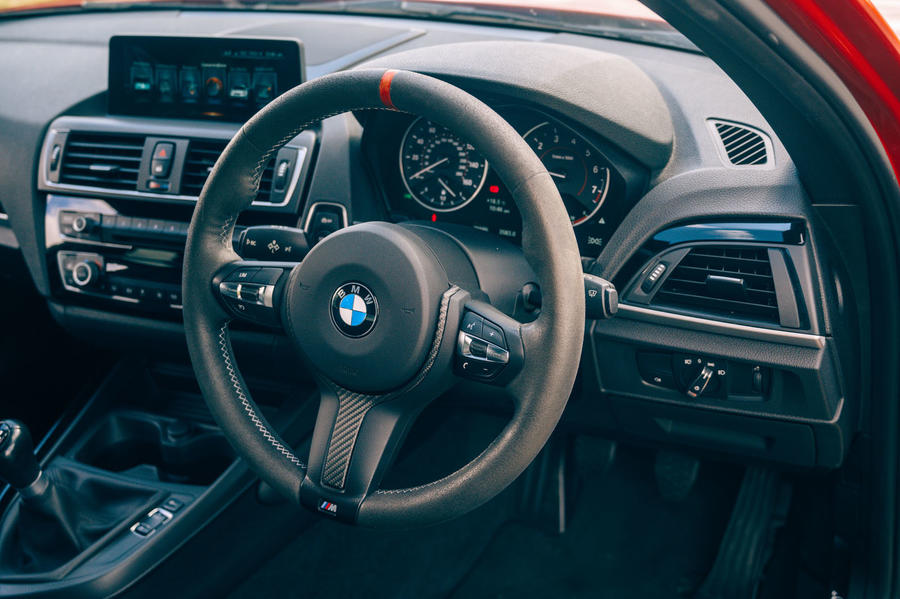 Fitted, the complete B1 Dynamics Package (suspension and LSD) costs £3633, plus £3352 for the engine upgrade, short-shifter and revised clutch weighting (consider carefully if you drive in town often).

Altogether, it’s not an insignificant sum, but the result is a car damn near as quick and exciting as the M2 Competition and, whisper it, more balletic on the road and certainly more usable, so it’s money well spent. M140i owners, form an orderly queue. 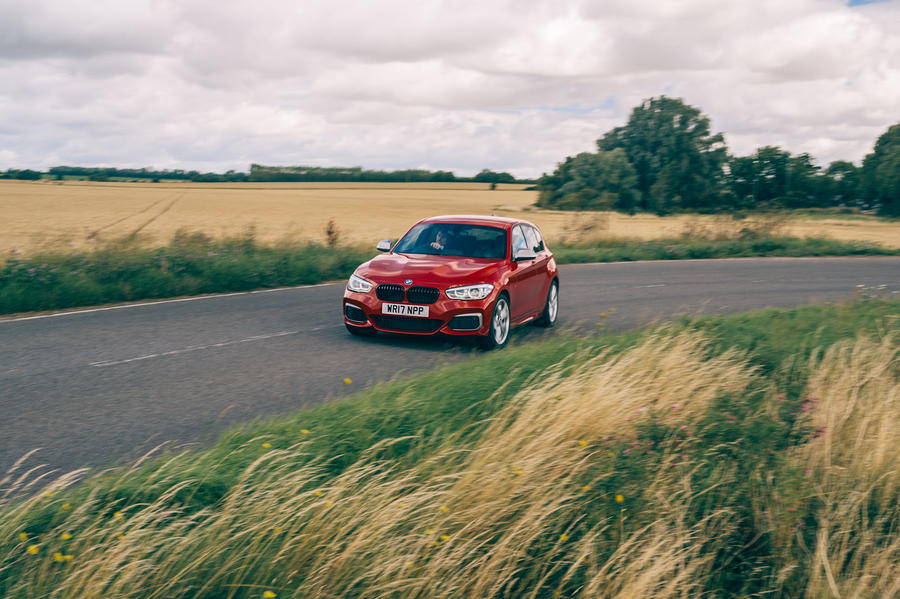 I own a Birds M240i with Quaife diff and their Bilstein based B2 suspension. The kit really does transform the car as described, waaaaay better than the stock setup and I am still really happy with it. However, I reckon you can achieve the same/similar results for a LOT less cash than the numbers mentioned here. For example, the B2 suspension is not that much different to the off-the shelf- Bilstein B12 pro suspension which is less than half price at around £600....or £800 fitted. Never heard a bad word about it. A Quaife can be had for around £1900 fitted on an exchange basis. I was lucky enough to get mine for £1600 fitted on a group buy deal. As for the engine software, just go either with a tuning platform such as Bootmod3 or MHD which have fantastic off the shelf flash tunes that you can do yourself for £400 - £500.  If you really want a custom tune, go to somewhere like Litchfield or BW Chiptune who will remap the car for about the same. Add this up and you are looking at around £3k all in. This obviously doesn't include the short throw shifter but most are auto anyway.

This sounds like a great car BUT why oh why is it only in 5 door guise? These hot hatches are made for 3 door versions. Audi has made the same mistake with the S3 and RS3 and BMW has done the same with the 140. There are potential customers who rarely, if ever, need the rear seats but value the large boot space with the rear seats folded down. Also, 5 doors ruin the look of the car. It's disappointing that 3 door hatches are disappearing.

This sounds like a great car BUT why oh why is it only in 5 door guise? These hot hatches are made for 3 door versions. Audi has made the same mistake with the S3 and RS3 and BMW has done the same with the 140. There are potential customers who rarely, if ever, need the rear seats but value the large boot space with the rear seats folded down. Also, 5 doors ruin the look of the car. It's disappointing that 3 door hatches are disappearing.

Potentially they were selling too few of these to be worth it for them, same happened to Golf GTI.

...really sweet piece of kit. Kudos. The price for updates would be worth for me.