BACK TO ALL NEWS
Currently reading: Buy them before we do: second-hand picks for 6 March
UP NEXT
Tesla achieves best quarter on record with Q3 performance

Buy them before we do: second-hand picks for 6 March

Trips to the tip will never be the same again with one of our five hot estates, starting with this, the Mercedes-AMG C63. It’s the W204-series model produced from 2008 to 2015 and powered by a 451bhp 6.2-litre naturally aspirated V8.

A neighbour of mine has run a 2011-reg example for the past few years. His facelifted model has 50,000 miles on the clock, and it growls sonorously when he does the school run.

It’s a good basis for a buying guide. The firm suspension and 19in wheels have weakened the interior a touch so that it creaks a little over bumps. He has to keep his eye on the oil: up to two litres between services isn’t uncommon. With a heavy right foot, fuel economy slips well into single figures. That might explain why many C63s we encountered in the classifieds could count five previous keepers in the logbook. 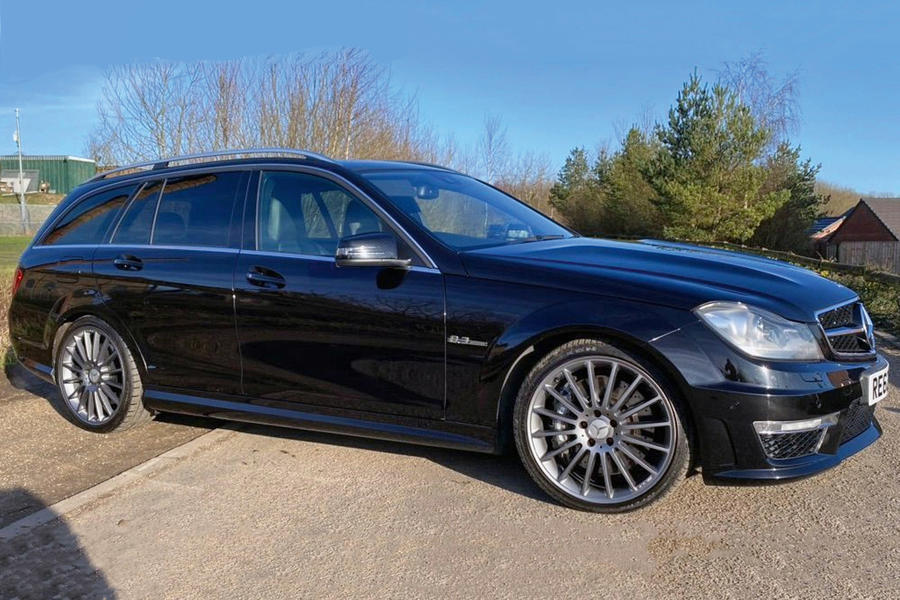 Our find has just two. It’s a 2012-reg with 70,000 miles and full Mercedes service history. It rides on 18in wheels so might be a tad more comfortable than my neighbour’s car, as well as a bit tighter feeling.

If we were properly serious, we’d check the condition of the oil-filled engine mounts (they can start vibrating at around 60,000 miles) and the operation of the coolant thermostat. Our find’s full Mercedes service history means the 40,000-mile transmission fluid and filter change is likely to have been done.

The front control arms are a weak spot. It’s a heavy car with bags of grunt so we’d want to see lots of life on those discs and pads. Inside, we’d listen for creaks and rattles and ensure the infotainment works. 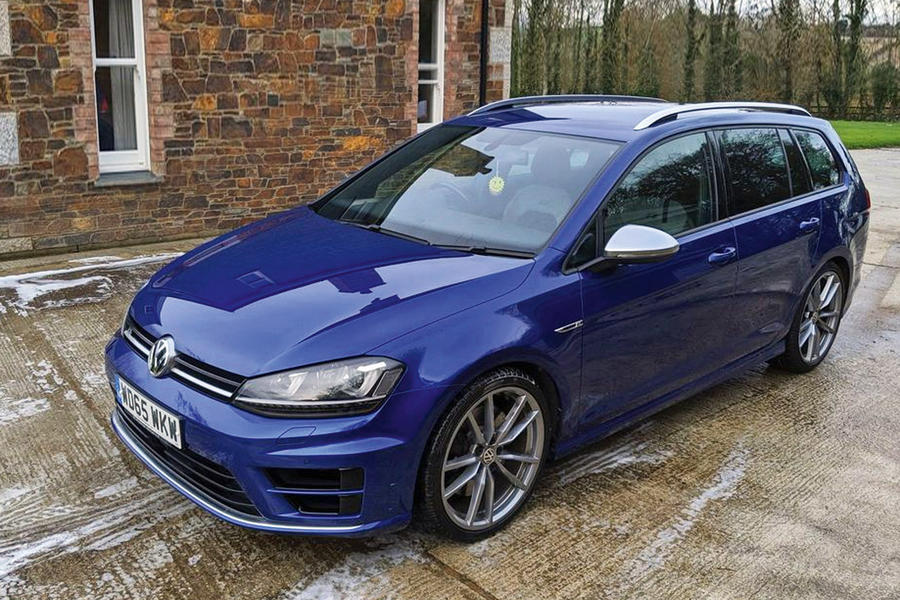 Volkswagen Golf R Estate, £15,250: All the thrills of the hatchback with added practicality. It comes with an automatic gearbox only yet that’s no hardship. The rear springs are stiffer but the ride remains comfortable. This one’s a 2015 car with 59k miles, full service history and one owner. 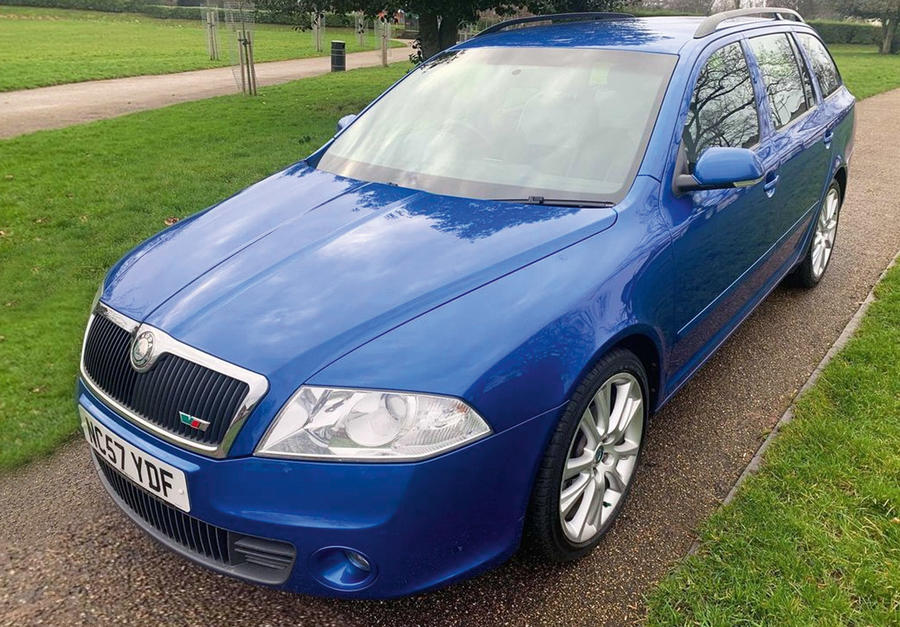 Skoda Octavia 2.0 TFSI vRS Estate, £2995: This 2008 vRS has done 119k miles but looks good on it. It’s the everyman’s sports wagon, with 200bhp for the price of something much less exciting. This pre-facelift model has less troublesome engines than later direct-injection ones. 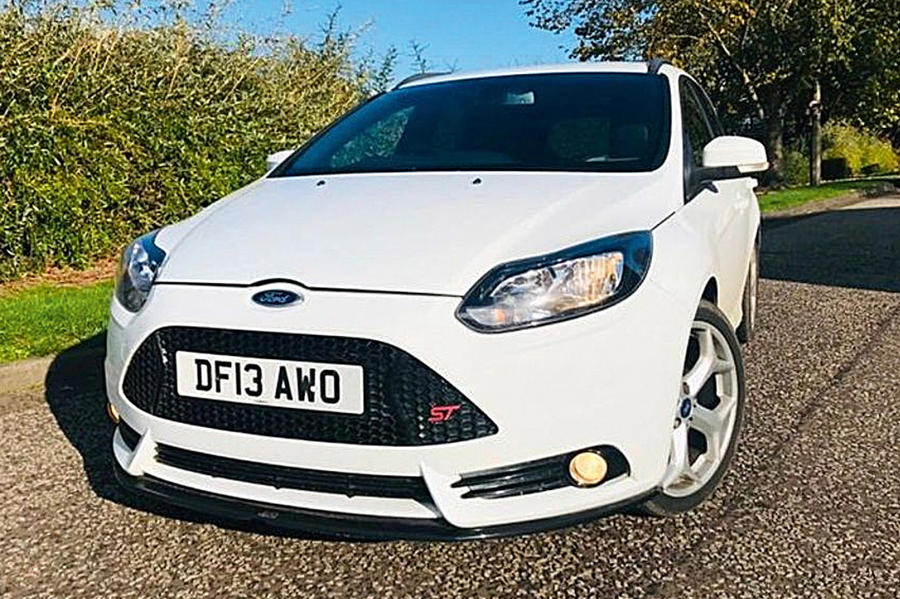 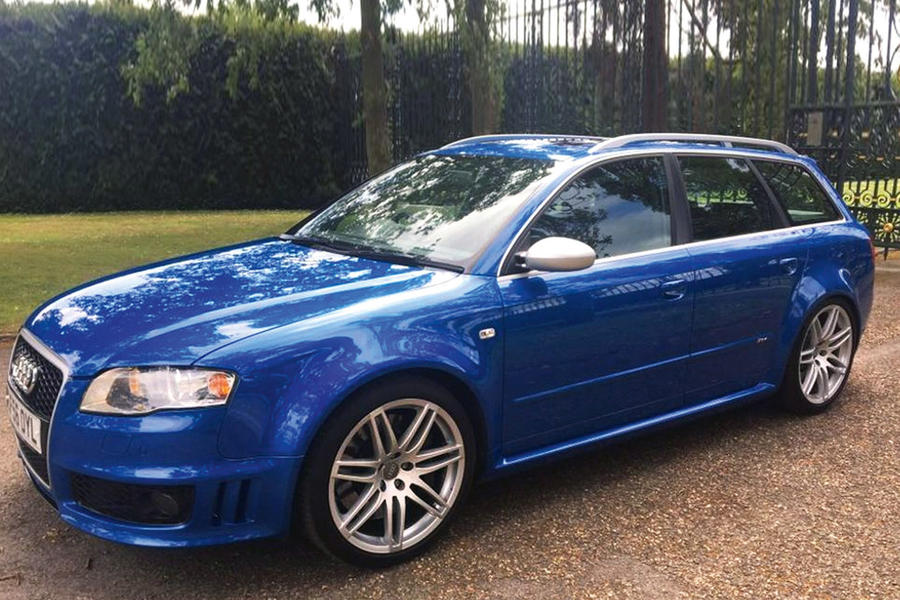 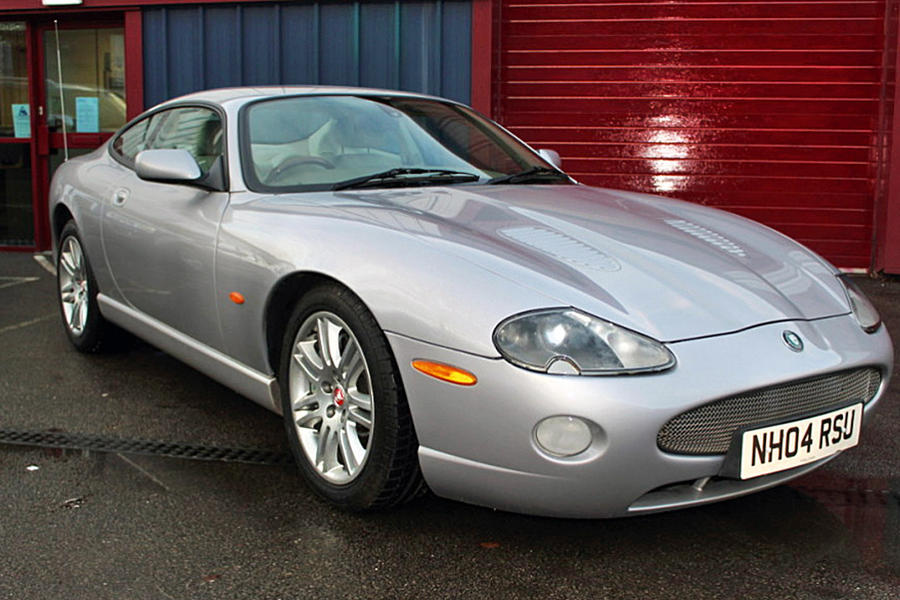 Jaguar XKR 4.2: Billed by the auction house as an Aston Martin DB7 for half the money, this 79,000-mile, 2004-reg XKR reached £7600. It was a well-maintained example with 11 stamps in the book, the last job being new discs and pads. These cars are not rare, of course, and you can buy earlier 4.0-litre versions with more than 100,000 miles for just £4000. However, tidy, lower-mileage 2004-reg 4.2s like our auction example generally start at around £10,000, so someone, probably a trader, had a good day. Incidentally, it was fitted with the standard 18in wheels rather than anything larger so should have been comfortable as well as quick. 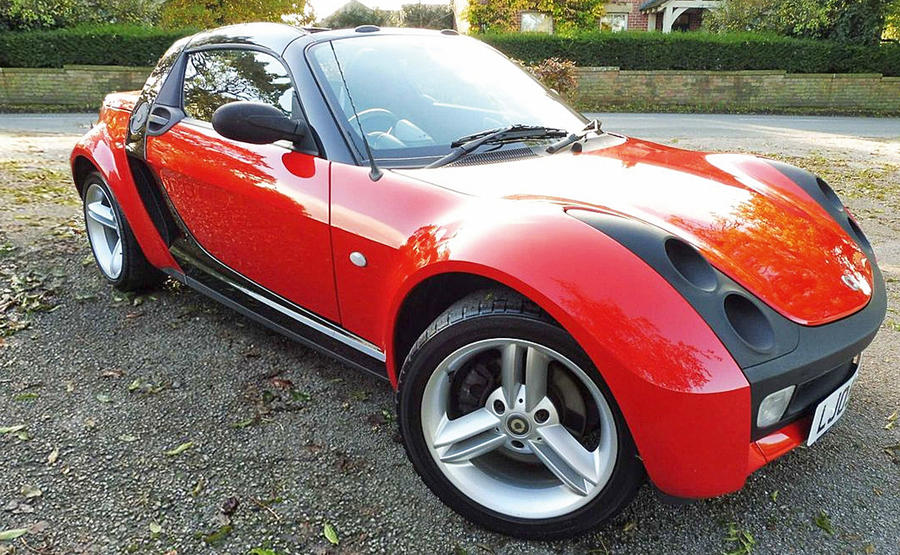 Smart Roadster, £3495: In truth, it’s already a classic but appreciated by only a small circle of clued-up folk who buy into its titchy, albeit turbocharged, 698cc three-cylinder engine. It produces 81bhp, which is fine for a car weighing 790kg. Rust? Forget it: the body panels are plastic and its Tridion safety cell is galvanised (that said, black ones are showing early signs of tin worm). Rain leaks are a problem, though, so beware any car that has been parked outside for any length of time. Our example is a one-owner, 2005-reg with 40k miles and a good service history. 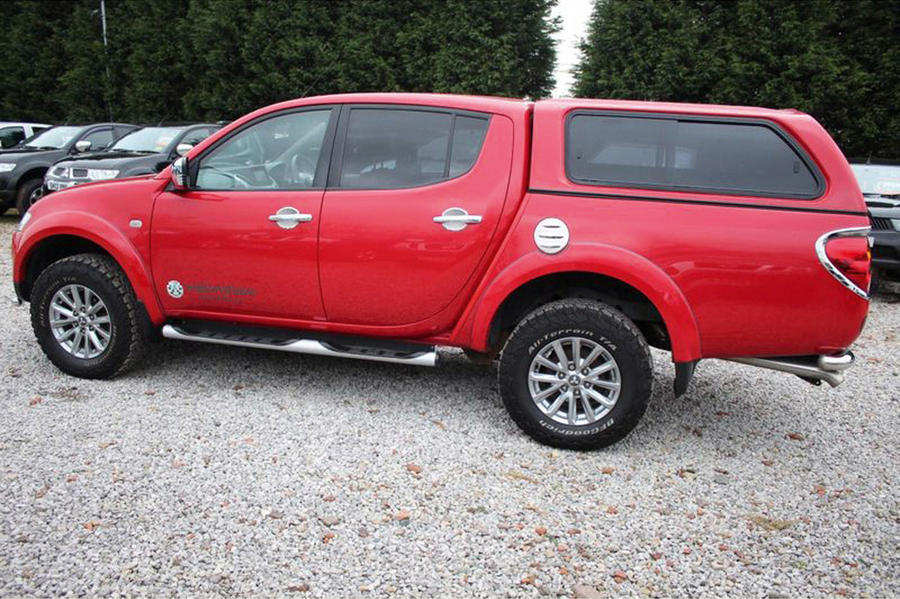 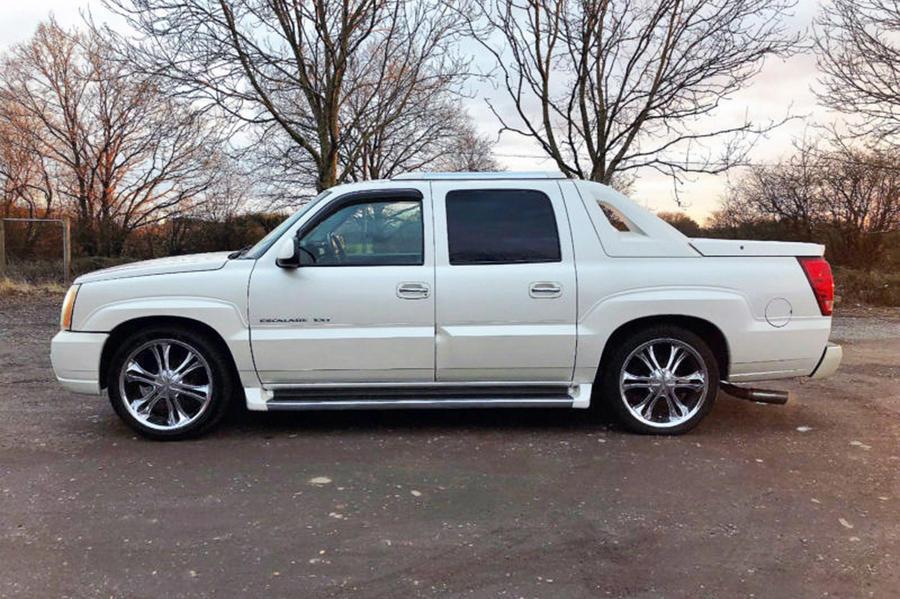 Max Adams: Established performance tuner Tom Walkinshaw has been over my choice with a fine-toothed comb. Not only is there more power, but it has a sophisticated five-link rear suspension system to make it handle better, too. What wallowy barge have you got, Mark?

Mark Pearson: Yes, well, I’ve found a bit of a peach here, Max. Take one Cadillac Escalade of immense vigour and extreme mega-SUV style and transmogrify it into a pick-up you can use with ease and impunity everywhere. A 6.0-litre V8, chrome 22in wheels, custom leather interior and all the trimmings. Lovely.

MA: To be fair, my L200 has most of those luxuries and is a damn sight more capable off-road, thanks to its chunky BF Goodrich all-terrain tyres. It’s also 10 years younger than your 2004 truck.

MP: In many ways, though, mine is the best car in the world. It’s powerful, refined, comfortable and spacious, with room for all your household goods in the back. It’s the sort of thing the Kardashians would buy for their gardeners. Yours, I can’t help feeling, is a bit ordinary.

MA: Hang on! Yours has a set of speakers in the bed, making it a rather impractical rig. There’ll be no hauling of goods in that gaudy piece of Americana.

MP: I can always tell when you’re getting a little jealous. Your cheeks go red.

MA: No, that’s just a reflection of the excellent paintwork of my winning truck.

Verdict: That Escalade is more pumped-up than Arnie. I’ll take it.