Mercedes will dramatically reduce its model line-up as well as platform and powertrain options, as the maker seeks to reduce complexity and optimise profit.

Markus Schafer, Mercedes R&D boss said the drive came as a result of its focus on electric vehicles, and would range from cutting car lines to single components used in its products.

“We are reviewing our product portfolio, especially as we announced so many pure EVs. Knowing the complexity after the growth in the last couple of years means we are definitely reviewing our current lie-up. The idea is to streamline - taking car variants out, but also platforms, powertrains and components.”

The manufacturer currently has 45 models, but Schafer did not put a figure on how many it would axe.

Schafer named models including the G-Class, SL, AMG GT, S-Class and more, as each have their own platform currently. “There are many single platforms right now and the idea is to reduce this. In the future, we will have the same underpinnings with various cars and you will see the results pretty soon,” he said.

Talking about the future of more traditional powertrains such as the AMG V8 unit, Schafer said: “The plan is not to kick out the V8 and V12, for example, so long as there is customer demand.” However, he said the incoming Euro7 legislation would force the maker to reflect on which powertrains will be worth putting through the process. “Probably, yes, [powertrain] variants will reduce. Of course, four-cylinder engines will make more sense than a V12. Let’s see what Euro7 requirements are and go from there.”

Mercedes has completed the introduction of four variants of its 2.0-litre unit, in four-cylinder and six-cylinder guises and available in petrol and diesel. Built on the same line, Schafer said: “This family of four engines can respond to any market change immediately. We planned this protection a couple of years ago in order to protect us in terms of different demands and regulations.” 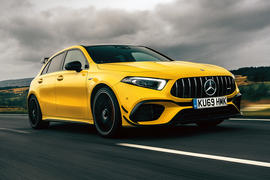 .... we have all been saying for several years now that the models are too close together.

Most recently as an example GLA/GLC/GLE and now they have jammed the GLB into the range (less than 2 inches shorter than the GLC). Surely this renders the GLC redundant now?

There you go the world always

3 March 2020
There you go the world always looks to the Germans as good at business. Well anyone with a no knowledge of car making could see that Mercedes just kept on filling every niche. as has been said why so many SUV,s all so close in what they offer WHY ?. They are not selling like they used too, why do they want every niche when there is no niche to fill , while forgetting they are supposed to be a premium brand. Common comes to mind .So it has come back to bite them on the bum. Nearly every Lidl car park every drive has a A class, B class E class on it.Suppose its those pesky PCP,s stack em high sell em cheap for common as muck syndrome Sad mind BMW going down the same route. What with 1 2 3 4 5 6 7 8 is there a 9 are lets fill that niche Oh go on lets have a 10 ! Don,t mention Audi please
Not so go those Germans are they

The link in the 'Read More' section at the foot of the story headlines 'Mercedes to launch 32 models by 2022 in massive rollout', which is dated 3rd Feb 2020.

After brainlessly spending billions to design and put into production one model after the other, including the Nissan clone, Mercedes realised it rather cut back the models. Makes you wonder whether you hire their strategy team for running your off-license or not.

After brainlessly spending billions to design and put into production one model after the other, including the Nissan clone, Mercedes realised it rather cut back the models. Makes you wonder whether you hire their strategy team for running your off-license or not.

Read Ellesmere Port story below, if Tarriffs increase then Germany suffers, so I guess Mercedes are getting prepared and cutting models, who will be next in Germany?

What will happen to all the professional niche finders. Little chance that BMW has any vacancies, and JLR can't take them now they have no right to automatically work in the UK.Sad, as I was waiting for a car about a centimetre longer and higher than an A class with a small pick up bed instead of a boot and a wading depth of 40cm. Maybe Volkswagen could help, then I could choose from VW , Audi, Skoda and Seat variants.