From £30,3458
Performance Pack enhances the R’s point-to-point credentials, but it comes at a cost – and not just the £2300 asking price
Open gallery
Close

Volkswagen claims this is the sharpest-handling version of a deceptively quick, tremendously practical car that’s relatively affordable. It should therefore prove a desirable device indeed.

What we have here is the Mk7.5 Golf R Estate equipped with the Performance Pack. It’s an optional extra that costs £2300 and is already available on the hatchback. Included are 19in ‘Spielberg’ alloy wheels that replace the 18in ‘Cadiz’ items of the standard car and a new, lighter ‘R-Performance’ brake set-up with silver calipers, more on which in a moment. Aesthetically, there are no other changes, and the R remains a car whose performance is smuggly incongruous with its unimaginative design.

In terms of hardware, it’s also business as usual, VW’s flexible EA888 2.0-litre turbo petrol engine driving all four wheels through a seven-speed dual-clutch automatic gearbox (there has never been a manual option for the estate R) and a Haldex multi-plate clutch. Volkswagen's electronic 'differentials' are nothing of the sort and instead manage the transverse distribution of torque on each axle via the brakes.

As with the GTI, suspension is by MacPherson struts at the front axle and there’s a multi-link set-up at the rear. Our test car is fitted with £850 DCC adaptive dampers, which operate through four modes ranging from Comfort to Race, with an Individual setting in which their firmness – along with parameters for the steering weight, engine response and so on – can be selected to taste. 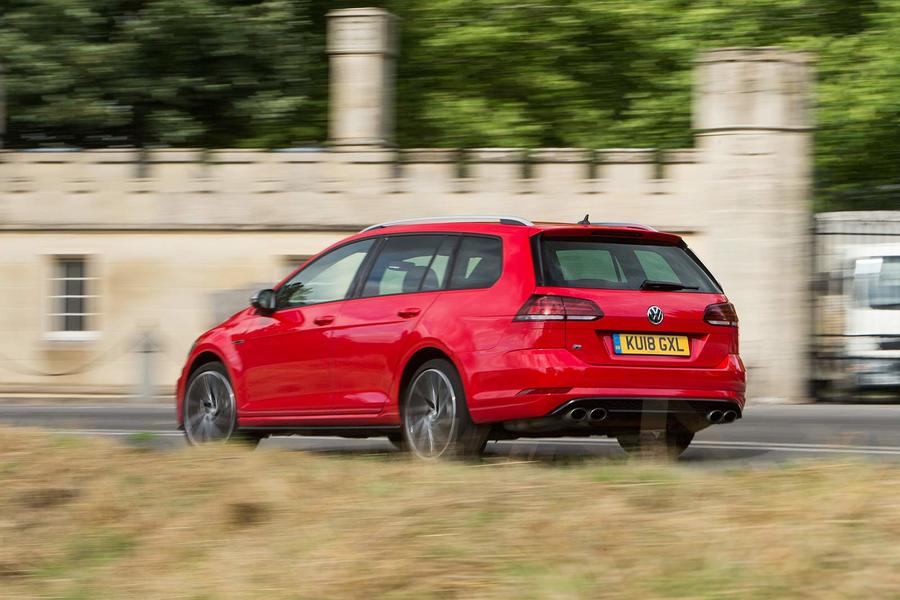 Soon to be sliver slower than before, presumably. One side effect of getting this engine to conform to new WTLP emissions regulations is a slight slump in power – from 306bhp down to an original, pre-facelift 296bhp. A more restrictive exhaust set-up designed to reduce nitrogen oxide levels is to blame. Fair cop.

Those modified engines aren't quite here yet, though, and even when they do arrive, we doubt the R will feel any less subliminally, bewilderingly quick in the real world. It's the type of car in which overtaking requires little or no preparation and then it’s done. The official 0-62mph time is 4.8sec, but it’s the engine’s mid-range, in-gear tractability – not to mention 280lb ft of torque between 2000 and 5400rpm – that makes for such effortless, flowing cross-country pace.

And when it comes to speed, Performance Pack Rs have a further trick up their sleeve. Wring one out in sixth or seventh and where the electronic limiter would normally bring proceedings to an abrupt-ish halt at 155mph, the car will continue to pull onwards – not that we put this to test out on the open road. Top speed has been increased to 168mph – 2mph more than the hatchback, which features a downforce-inducing rear spoiler not fitted to the estate. It makes this unassuming estate the fastest Golf money can buy.

But these all-weather hot Golfs have always been about more than straight-line performance, and that’s true of this particular variant. Grip and traction are little short of immense, although, this being a Golf R on Continental SportContact 6 tyres, that’s akin to saying the sky is blue.

It’s in the details where most satisfaction is found. The steering is quick and feelsome and, due to the larger wheels, response is perhaps a fraction crisper during that incipient moment of turn-in. On exit, the R still adopts a conspicuous rear-driven stance where front-wheel-drive rivals such as the Seat Leon Cupra ST would begin to seep wide, and there’s an overall agility that’s belies the bulky estate bodywork. In the wet, it'll oversteer under power, and with a well-timed lift of the throttle the additional weight over the rear axle can be used to help rotate the car on the way into bends.

If that sounds gung-ho, it certainly doesn't seem that way from behind the wheel. The R remains one of the most intuitive cars of its type you can buy, and playing around at the limits of the chassis feels natural in no time at all.

The special brakes save two kilos and use ‘built-pin’ discs, where an aluminium pot and the discs themselves are joined by cast pins. VW claims this helps the discs to expand radially when hot, providing better durability and pedal feel. We’re unable to verify the former claim but have no complaints concerning this car’s ability to shed speed with predictable precision, barring a slight feeling of over-assistance.

Indeed, complaints are thin on the ground. The driving position could be lower, you can’t get the Akrapovic sport exhaust that's available on the hatch and the DSG ’box can be a bit shunty at low speeds. That's it. 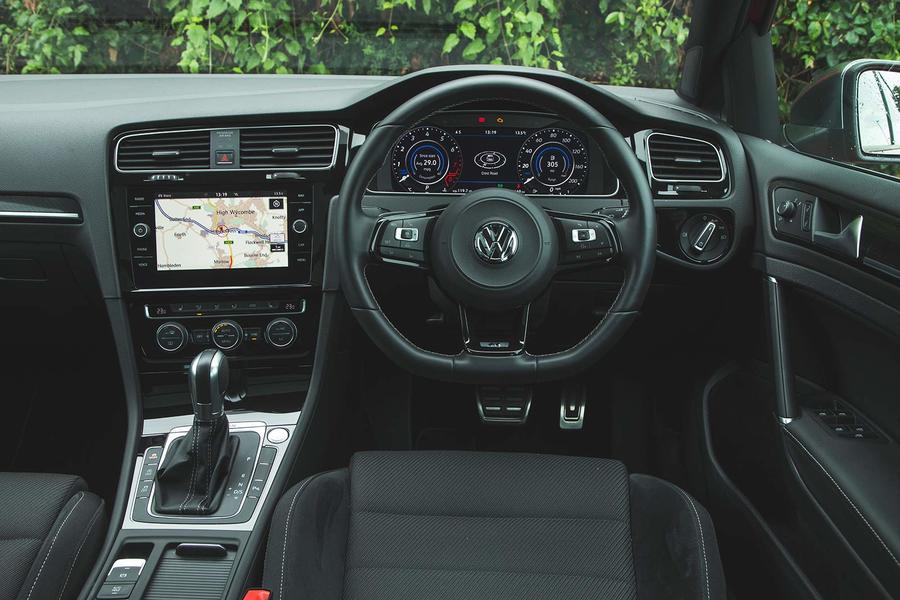 Fundamentally, the Golf R Estate remains an enviously good package. It’s quick but refined and so enjoyable for a car with almost as much boot space as a Skoda Octavia. In short, it’s a fabulous everyman-style GT car, and elements such as 12.3in display that now resides within the instrument binnacle keep it feeling contemporary.

Nevertheless, while those who regularly find themselves on the remaining derestricted stretches of German autobahn will be tempted by what the Performance Pack offers, British drivers are best off leaving this particular option box unchecked.

The improved brake set-up is welcome, of course, but it’s unnecessary for road driving. Meanwhile, the Spielberg alloys rob the R of some delicacy along rougher roads – a worthwhile sacrifice in the hatch, perhaps, but a questionable trade-off in a broad-batted estate, especially given the asking price. 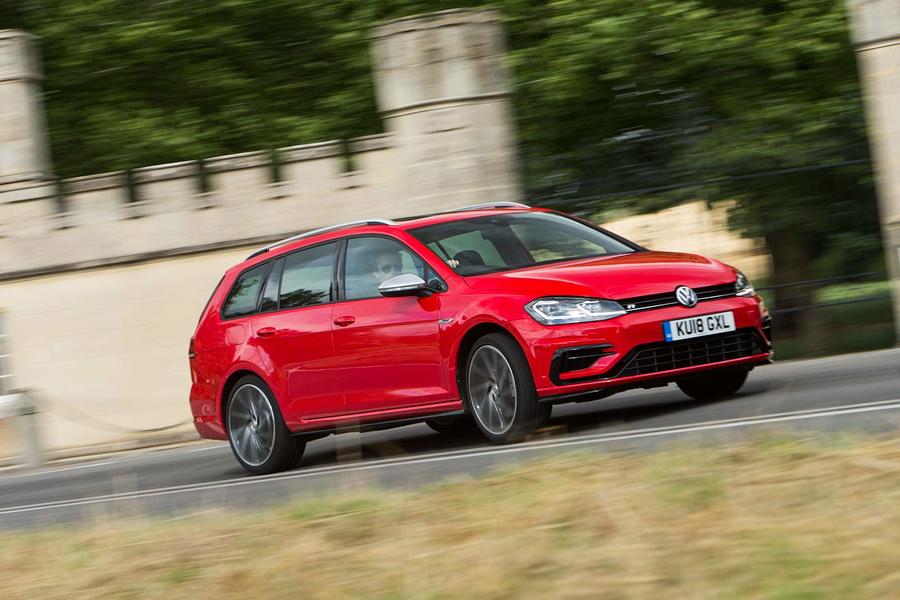 So here VW admit the power output has to be to reduced to lower NOX emissions. Yet they say the magic dieselgate  “fix” for older cars, has no affect on power whatsoever... Despite thousands of complaints saying it does. Hmmmmm

I haven’t seen one yet, maybe it’s too anonymous looking?, I don’t know,but an estate Gti, Ford never thought about an RS Focus Estate, anyone seen one or more...?

The adaptive dampers really should be standard. I don’t think VW has supplied a test car without them, yet this option is as rare as hens teeth on the used market.