BACK TO ALL NEWS
Currently reading: Buy them before we do: second-hand picks for 22 January
UP NEXT
Gordon Murray Group expands to develop EVs for car makers

Buy them before we do: second-hand picks for 22 January

Welcome to midwinter. Chances are you have said “it’s miserable out there” at least once today and are quietly glad you’ve less reason than usual to venture past the front door.

But let us not mope, for sunshine and good times are on the horizon, and what better way to get ready than by bagging an open-roof cruiser? Let’s kick off with one of our favourites: the BMW 4 Series.

Shortly to be replaced in dealerships by the buck-toothed G22-generation car, the original version, launched in 2014, is starting to look like extremely good value. Bolstering its appeal, for many, will be its metal folding roof, replaced on its successor with a conventional canvas item. 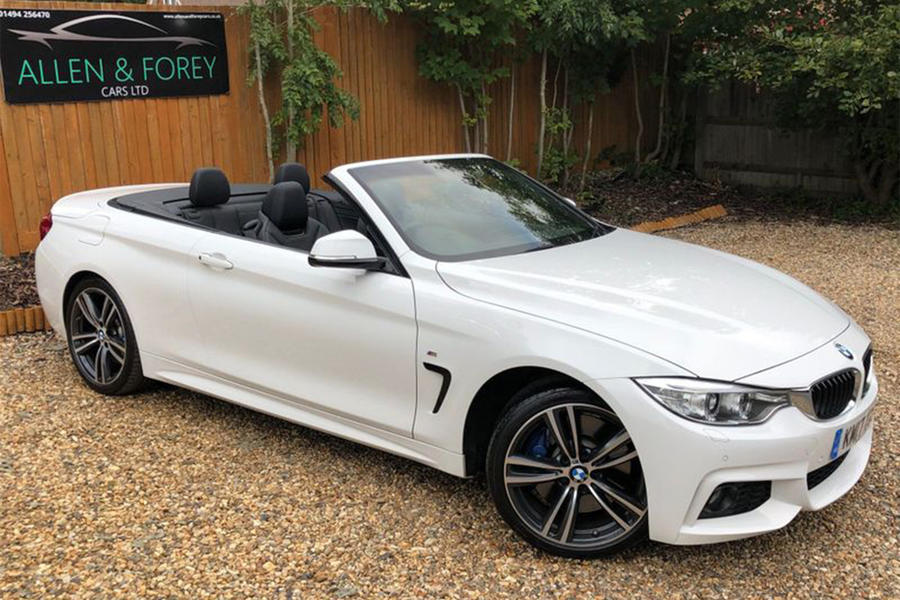 We’re quite taken by this post-facelift 430i, resplendent in unmarked Arctic White, equipped with the no-brainer, performance-inspired M Sport trim and – praise be – a manual gearbox. Although our car’s 2.0-litre four-cylinder petrol doesn’t pack quite the same punch as the M4’s straight six, we’ll make do just fine with 248bhp and 258lb ft. Realistically, if we were after uncompromised dynamics and exhilarating straight-line performance, we’d have gone for the coupé – probably the M4, at that.

But that would be to miss the point of a usable convertible, and come summer you’ll find it’s just as gratifying to cruise along at 40mph to everybody’s favourite Jazzy Jeff ditty as it is to hare from bend to bend at the speed of light. This car will need a fresh MOT (only its second) at the back end of winter, but given it has just 21,000 miles on the clock, we wouldn’t anticipate any problems there. 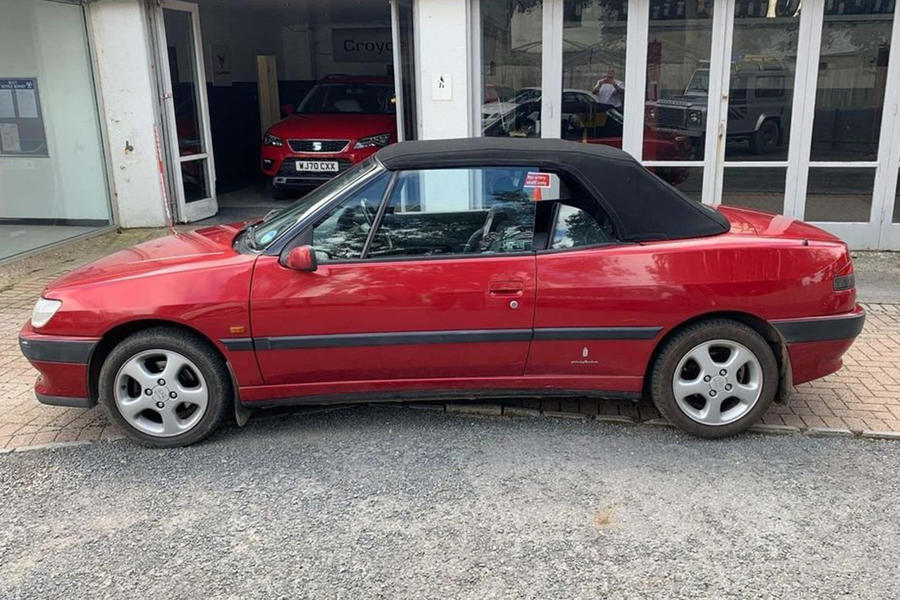 Can the car behind the controversial new grille meet a warmer reception?

Peugeot 306 Cabriolet, £3295: Pininfarina lines, a shiny teak centre console and – wait for it – front and rear mudflaps: you really are getting your money’s worth here. As if it could not get any more attractive, it has done just 31,000 miles, with an MOT through spring. Electric roof, too. 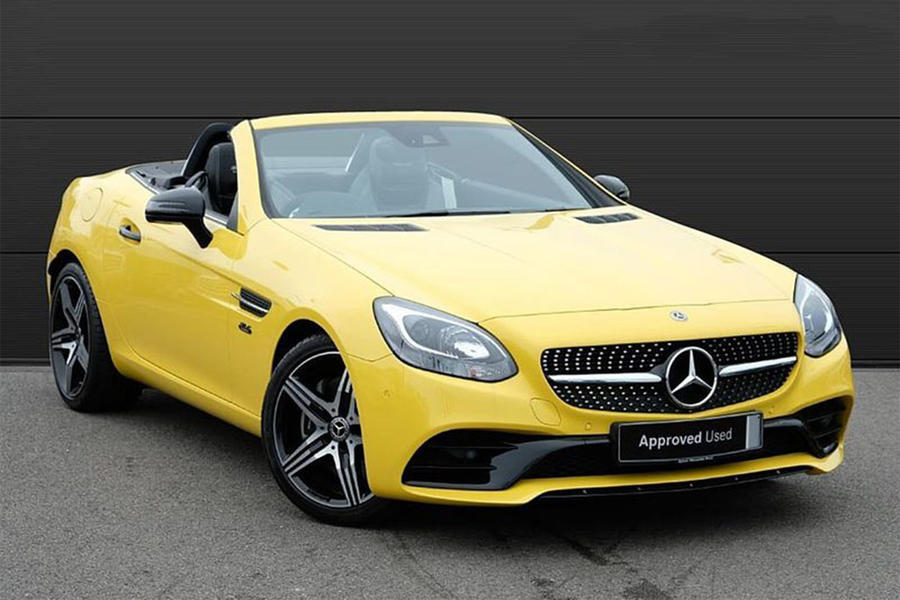 Mercedes-Benz SLC 200 Final Edition, £27,250: Merc’s roadster bowed out last year with the Final Edition priced from £37,000 new. At just four months old, this nicely specced SLC 200 example has lost £1000 in value for every 10 miles it has covered, but the next few thousand shouldn’t be so costly. 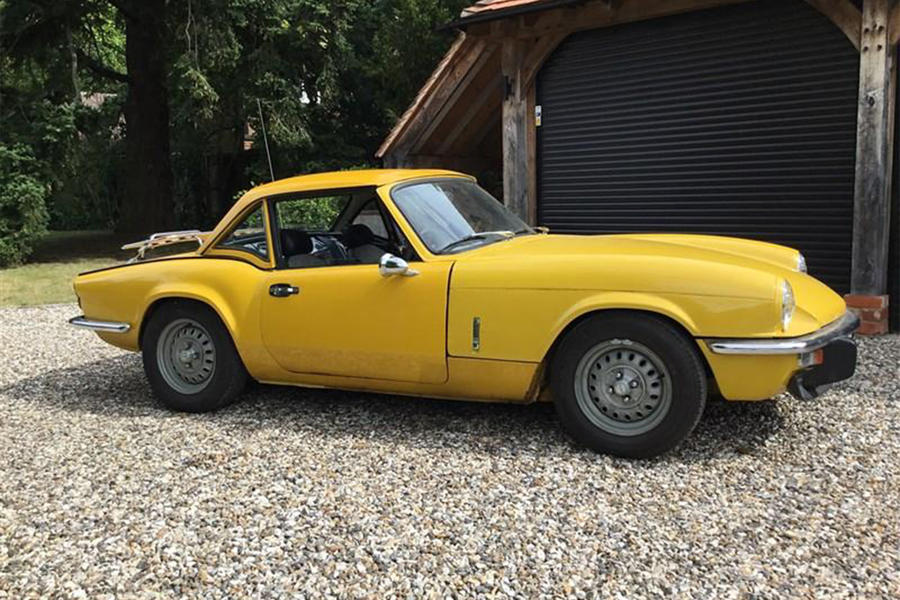 Triumph Spitfire, £7500: Oh, I say, a detachable hard-top? How spiffing. It’s fantastic to see so many Spitfires in regular use, although it does mean the classifieds are littered with ‘fixer-uppers’. This cheery yellow example is one of the last built and has already been restored once. 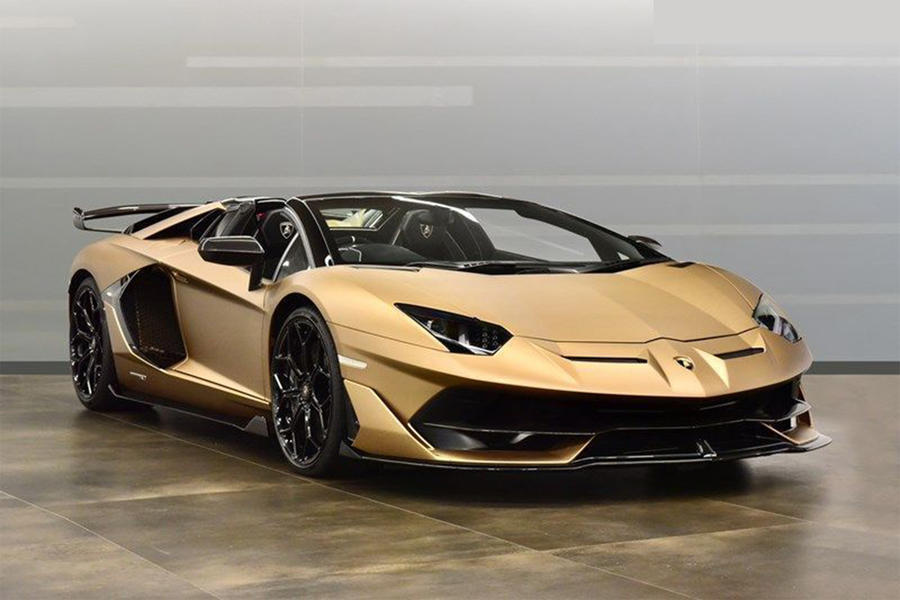 Lamborghini Aventador SVJ Roadster, £469,950: Wind in hair, flies in teeth, heart in mouth – this is a next-level open-top Sunday-drive weapon. We reckon it’s among the most memorable supercars on sale, if for the sheer brutality of that naturally aspirated V12’s bark alone. 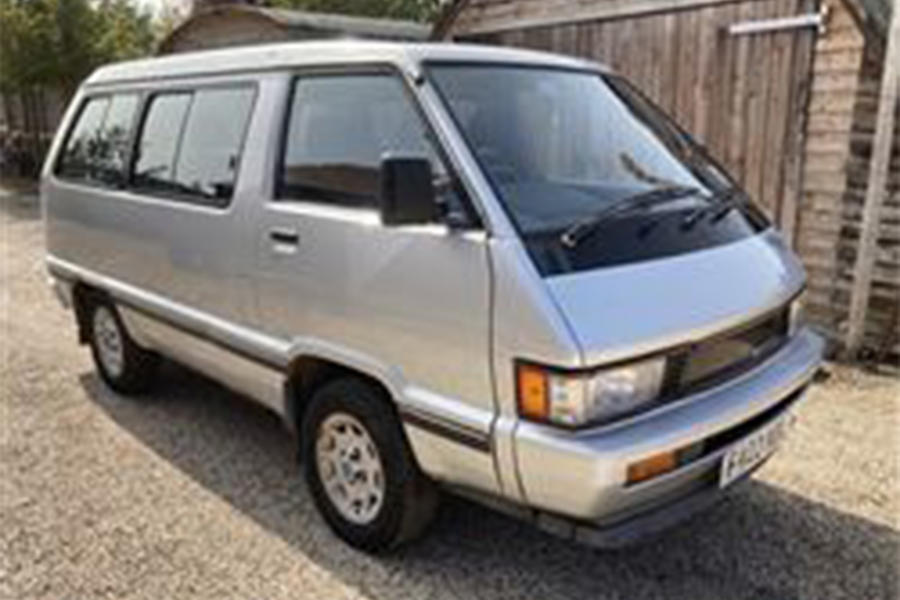 Toyota Space Cruiser: How cool is this? Well, perhaps to a lot of people, not very. But it has a fantastic name – and one that it wholly lives up to, with acres of room for each passenger and a wilful ability to sit at 70mph that belies its van origins. It’s a rare beast today and its wonderfully 1980s design cues give it kerb appeal like no other MPV built in the 32 years since. This one was expected to garner £2000-£3000 but failed to sell, perhaps because it needs extensive cosmetic work and was listed as a Category C write-off in 2007, but it starts, drives and comes with a stack of history, so here’s hoping it finds a home. 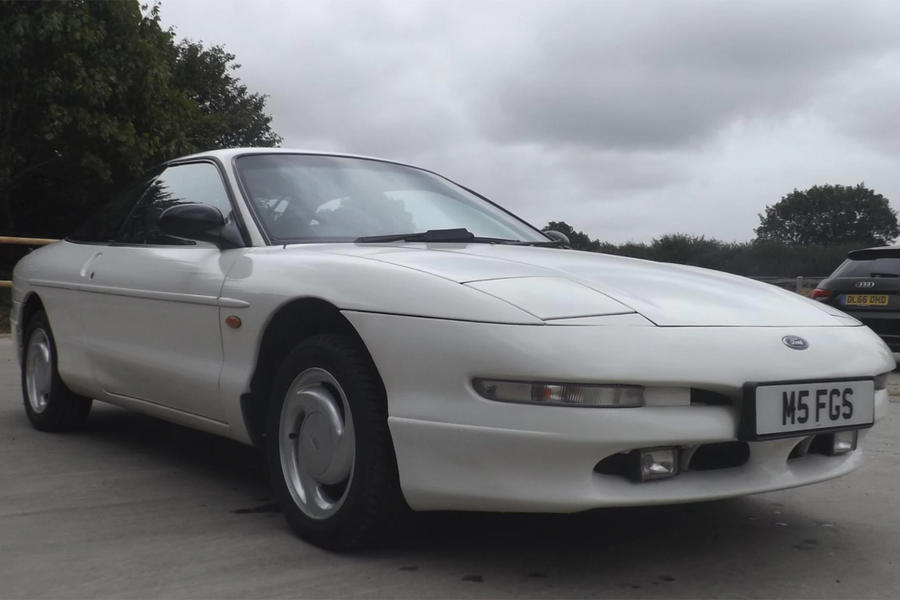 Ford Probe, £1995: It’s come as a bit of a surprise to learn how hard it is to find a good Ford Probe these days. In fact, at the time of writing, this was seemingly the only one for sale, the others having been either deemed unroadworthy or subject to some horrid visual modifications. So we’d be inclined to snap it up quickly were we hunting for a Sunday driver with investment potential, even though it packs the lowly 2.0-litre 16-valve engine rather than the rortier 2.5-litre 24-valve unit. It’s been dry stored, hasn’t wanted for a thing and has an MOT until July.

Brief: How about something colourful to brighten up the winter? I have £7000. 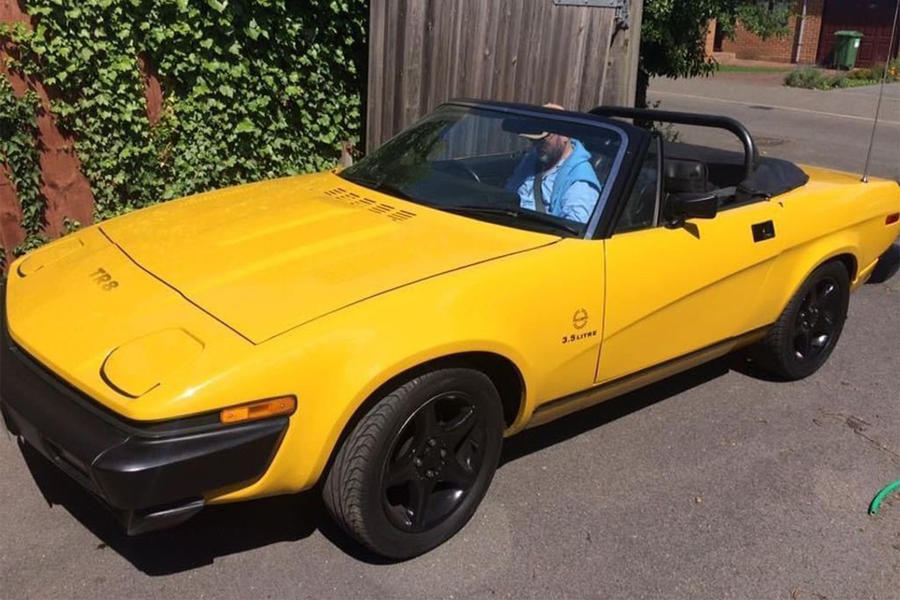 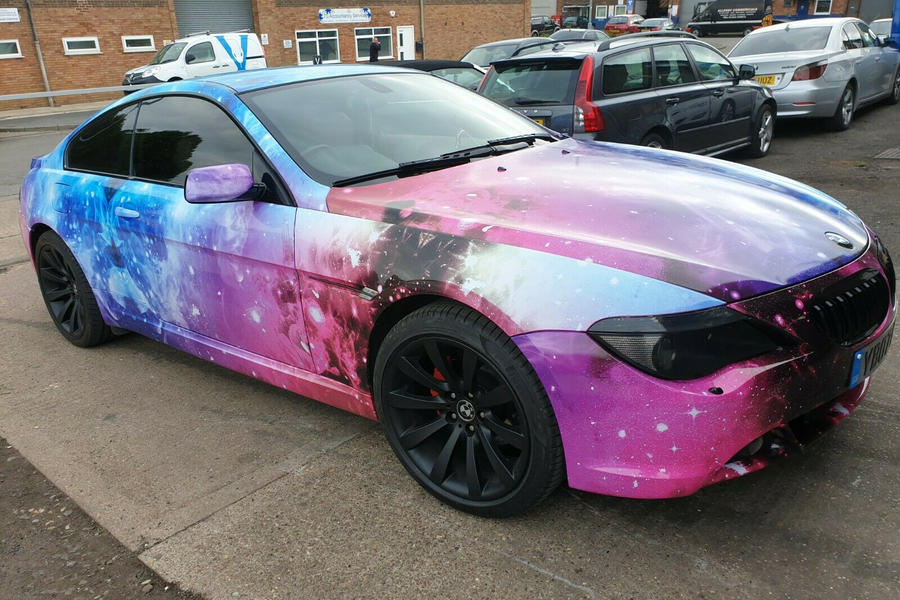 Max Adams: Mine is not an official TR8, but its bright yellow hue should nonetheless light up your day, James. The owner has taken a tidy TR7 drophead and stuffed a ruddy great 3.5-litre Rover V8 under the bonnet so it goes well, and it has a nice mohair hood for the winter weather.

Felix Page: My Beemer’s galaxy-style livery is appropriate because its mileage suggests it has been to the moon and back. The seller says “it’s very nice to be in”, presumably because the interior is less eye-achingly decorated, but all things considered, it’s less glaring than my beetroot-red face would be in that Triumph.

MA: I think I’d be a similar shade while stuck at the side of the road because of one of the numerous electronic meltdowns that plague BMWs such as your 6 Series.

FP: At nearly 200,000 miles, I’d wager most of my 6er’s niggles have been ironed out long ago. Speaking of ironing, your car’s aftermarket soft-top looks like it has been screwed up under the bed for a few weeks.

MA: A bit of heat and those lines will disappear. Anyway, I bet the owner covered your 6 Series in that wrap to disguise the awkward styling of your BMW.

FP: Maybe that’s also why your Triumph is painted a nice shade of Mature Cheddar – to remind everyone of its ‘cheese wedge’ unofficial moniker.

Verdict: That Triumph looks a proper slice of affordable fun.

The Spitfire looks good. But on close inspection it seems to have had a new front end, or at least a partial respiratory. Having owned one of these when new, or nearly new, and appreciated how many problems it had as well as what must be the most flexible chassis ever invented, I don't think I'd want another.

Better to spend a bit less on a much newer less troublesome MX5!