BACK TO ALL NEWS
Currently reading: The man leading the self-driving technology charge
UP NEXT
Spending 48 hours touring in a Ferrari Roma

A British autonomous vehicle maker is already doing very well for itself, but you probably haven’t heard of it. We pay a visit
Open gallery
Close

But wander in and you’ll discover the home of what is, by some measure, the UK’s most advanced autonomous vehicle manufacturer – so advanced, in fact, that it is already in the business of selling its four-seat electric self-driving pods to happy customers around the world at about £150,000 each.

This is not some outpost of Jaguar Land Rover or Nissan, however, but rather one part of the less well-known RDM Group, the parent company of Aurrigo, its autonomous vehicle arm, which is perhaps best known for its ongoing test projects in Milton Keynes, where it has been running its pods safely and effectively in public environments for some time now.

Listen carefully and you’ll soon get an idea of the depths of expertise in the room – partly from the number of big-brained qualifications being bandied about (think maths, computer science and electronics degrees) and partly from the variety of accents that give away the global pull of working at a cutting-edge firm. 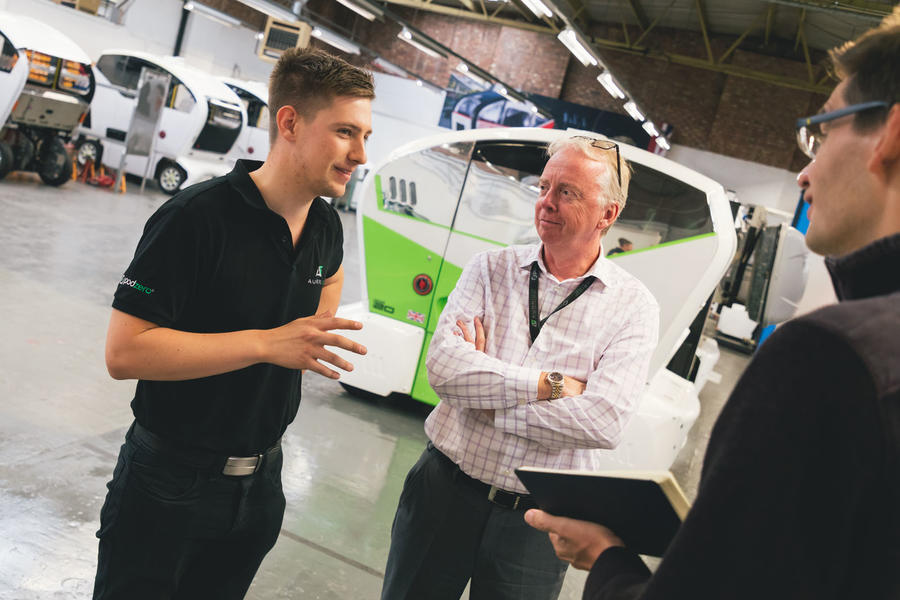 Heading it up is the firm’s CEO and co-owner, David Keene, who is – to emphasise the above point – also entitled to call himself Professor David Keene, BSc (electronics and electrical engineering), MIET, CEng and FRSA. “We’re on a journey with autonomy but I think our success to date is the result of being realistic and unrelenting,” says Keene, surveying the first, two-seat autonomous prototype the firm built – without even any suspension – six years ago.

“We aren’t looking to take on JLR or GM and get 50 million self-driving cars on the road; we’re looking to develop advanced systems that achieve enough to be sold to customers.”

So it is that the firm has trials running in Australia, moving old people around a gated community to give them mobility where otherwise they would struggle. There’s also a project at Heathrow’s Terminal 5, with an autonomous baggage dolly taking luggage crates to and from planes. By operating in environments that are easily mapped and where the risks can be contained, the possibilities of using, rather than talking about, autonomous vehicles open up. It’s a popular formula – other projects are running in Canada, Finland, Singapore, the US and Vietnam. 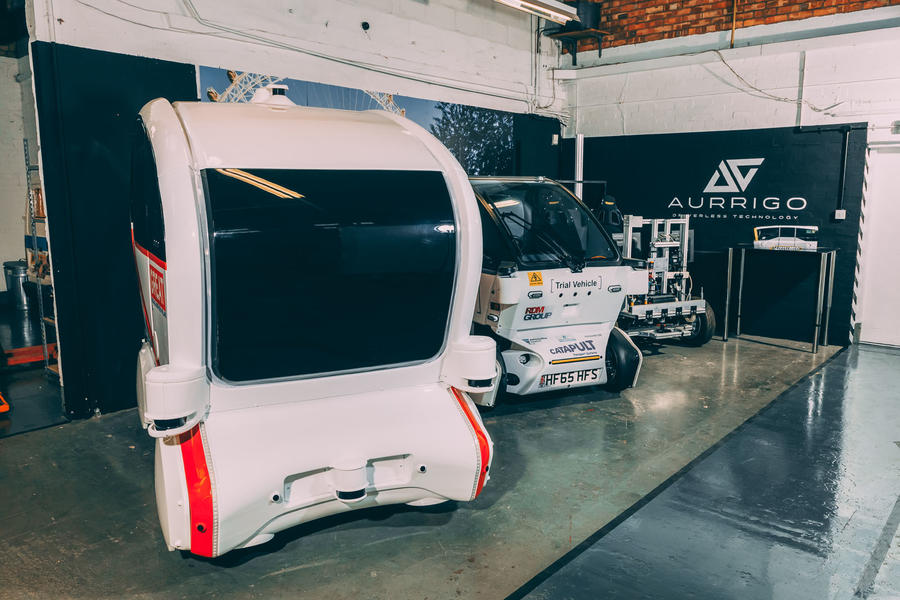 “Our approach – backed and boosted by investment from various initiatives such as Innovate UK and CCAV – has always been to build our expertise in a modular way,” says Keene. “In the same way you don’t try to teach a one-year-old to run, we have always focused on building our understanding and applying it step by step according to the ways we can imagine our work being employed in the real world.

“The airport scenario is very interesting. If you look into the number of baggage trucks running around and the issues they have with lost bags, time management and even damage from hitting things, then we can provide a solution. Certainly airports and airlines are keen to talk to us, and we see a great business in that in a way that an OEM looking to sell hundreds of thousands of cars may not.”

Keene lists other possible outlets, from university campuses, hospitals and theme parks to communities for injured ex-servicemen or old people. Another example of that is being assembled just around the corner along the way. Through RDM, Keene has worked with manufacturers including Aston Martin, Bentley, JLR, Mazda, McLaren, Mitsubishi, Morgan and Volkswagen over the years and understands the need to keep some projects secret, but he’s happy to show us – if not let us photograph – the next evolution of the firm’s autonomous revolution: a 12-seat bus that is being assembled and which will initially run in protected busways around the UK.

“The idea is that we trial it in Cambridgeshire overnight – in a restricted bus lane and when there are fewer pedestrians, cyclists and hazards in the way – and build our understanding,” he says. “I don’t expect there to be fully autonomous cars on our roads in a major way in my lifetime, but what we’ve proved is that there are numerous situations where they can operate and make life better. Our goal is to make them a reality.” 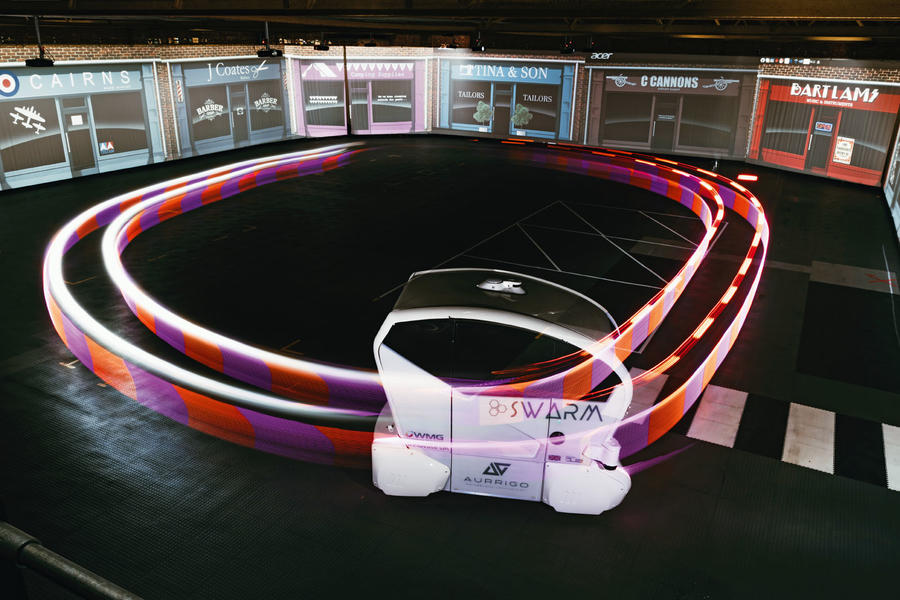 David Keene set up the RDM Group with his brother, Graham, 26 years ago, and can still recall the shock of his parents when he announced, aged 29, that he was giving up a high-flying career as an electronics engineering manager at Rover to do so.

Today, the thriving company – coincidentally based on the site of the Humber car factory – has expanded in a scarcely believable number of ways. The carbonfibre facility, for instance, ticks over off the back of a deal to manufacture replica American footballs to sit atop trophies exported to the US, but it also makes parts for the upcoming Aston Valkyrie. The trim department can upholster cars to order but also makes leather bonnet corner edges for Morgan. A wiring facility sends out 500,000 looms a year.

Perhaps the biggest headlines belong to David’s ownership of X-Part, supplier of parts for MGs and Rovers; Wood & Pickett, the once-upon-a-time makers of converted Minis for the likes of the Queen and The Beatles; Leacy Classics, supplier of classic car parts; and Revival Cars, which rents out classics including a Mini, MG RV8, Morgan 4/4 and Jaguar Mk2. “So long as I can see how it contributes to the core goals, I’m open to any ideas,” says Keene. “If an off-beat contract can fund a piece of equipment that I can use elsewhere, and keep a team employed working on it, then I’m all for it.”

Is the public ready to share the roads with self-driving cars?

Trips to the Pub (and back home) in these vehicles will become a no-brainer... And a mandatory part of UK life in the not-so-distant-future. An absolute necessity, the Gov't will say, when ya live amongst yobbos who abuse drink-driving ethics.

Vehicle autonomy how it is NOT meant...

Human drivers are a threat to everyone.

You can not compare these

You can not compare these little players with the real juggernaut leading this field, Tesla, which has billions of miles in real data and with use of AI and supercomputers. It is heads and shoulders ahead of everybody.

It’s your head and shoulders you’ll lose when your ‘advanced’ Tesla autopilot doesn’t spot the juggernaut crossing the highway and you’re not paying attention and drive underneath it.

Autonomy is a sham if it relies on human backup. You’re sold apparently advanced driving assistance that still relies on you to bail it out at a moments notice if it gets too tricky. Pointless.

I admire Tesla’s ambition but it concerns me that some people actually believe the hype and that they actually own an autonomous car.

Harfy the lad does not

Harfy the lad does not understand the point. It's is data and information that will drive future autonomy. Nobody has more experience and innovation on this than Tesla. Their system is yes "heads and shoulders " above any competing system that is on the market (ask all the luxury German carmakers) and the gap is increasing every day. Nobody said the system is perfect but is getting better and better. It has already prevented many accidents and deaths. Autonomy full or partial is the future. Naysayers like you really don't understand this technology just as you never understand electric cars. Good luck with that Trabant

One learns, they all learn.

Every road accident caused by a human educates just one human, if they survive. Every automated vehicle accident educates the "hive". The unfortunate decapitation several years ago (which probably wouldn't happen in Europe, where lorry trailers are safer) will have been immediately analysed in depth by Tesla and failure in the same circumstances is unlikely to be repeated with newer hardware & software - unlike human drivers who will keep being dumb. There will always be accidents, but trials show machines to be 95% less likely to cause an accident than people.