BACK TO ALL NEWS
Currently reading: VW Passat 2019 facelift to bring new tech and improved hybrid
UP NEXT
New Volkswagen Golf R 20 Years is most powerful production Golf

Volkswagen is due to follow next year's reveal of the Golf Mk8 with an updated Volkswagen Passat range, and new spyshots show the car being put through its paces.

Test mules for the Ford Mondeo rival are hard at work cold weather testing in the Arctic circle, and a number of tweaks to the exterior are hidden behind camouflage. The front-end will be brought into line with the yet-to-be-revealed Golf, so expect reprofiled headlights and new grille and bumper designs. At the rear, redesigned tail-lamps will feature.

Inside the Passat will benefit from VW's latest infotainment system, found in the facelifted current Volkswagen Golf and new Volkswagen Touareg. It's larger, more feature-packed and brings gesture control. Expect the usual trim and material revisions, too, but it's likely Volkswagen's wide-reaching cost-cutting plan will reduce the number of trim level and engine choices. 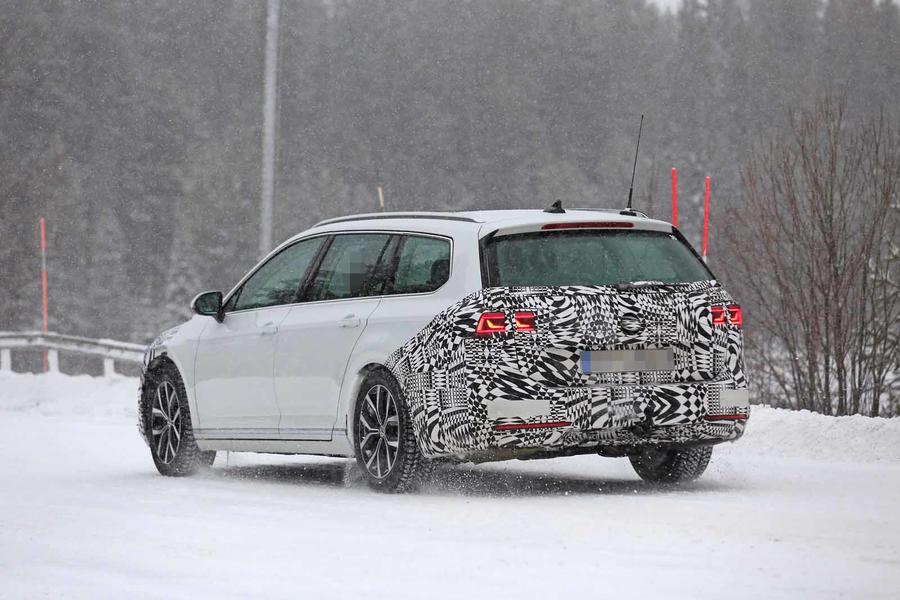 Speaking of engines, we know for sure that VW will be drafting in the firm's new 1.5 TSI Evo petrol engine in place of the old 1.4. It's plausible that diesel engine choice may shrink, although the fleet-heavy mix of Passat sales means it's still expected to be the volume fuel.

One way VW intends to decrease the Passat's CO2 emission rating is by offering the plug-in hybrid powertrain in cheaper variants than the existing GTE version, which was a victim of the WLTP emissions regulation change. The powertrain itself will receive minor improvements including a larger lithium-ion battery, allowing for a greater all-electric range. It's also likely that VW will integrate 48v mild hybrid tech into certain variants, as it will on the next Golf.

2019 Volkswagen Golf Mk8: All the details of next-gen hatchback

Yeah, usually Black, hardly noticed, is it a good Car?, who drives them?, I think that’s the problem, anonymity........

Anonimity is not a problem

Peter, many people prefer not to stand out from the crowd: their choice! There are enough of them for VW to offer a car suited that segment.

Besides, some cars wear certain colours better than others: a black Clio or 208 looks silly and no doubt a 'burnt orange' Passat would look equally silly.

Horses for courses, no more...

The 1.5 TSI is a cracker in my SEAT IBIZA FR: strong but linear and very economical: 5.7l/100kms LONG-term!

Admittedly, the IBIZA has a lighter body but there is ample bottom end to make the Passat go reasonably well, too. Time will tell...