New Mk8 Golf is available to order now priced from £23,875, with cheaper variants and more sporting models on the way
Open gallery
Close

Order books for the new Mk8 Volkswagen Golf have opened in the UK, with pricing starting from £23,875 until more variants are rolled out.

Initially, only two trim levels will be offered by Volkswagen . Entry-level Life comes with standard kit such as 16in alloy wheels, automatic LED headlights, front and rear parking sensors, ambient lighting and keyless start, as well as a 10.25in digital instrument display and 10.0in touchscreen infotainment system with sat-nav.

Wireless phone charging, a wi-fi hotspot and a three-year subscription to VW’s We Connect Plus services are also thrown in, as is ‘Car-to-X’ technology that will eventually allow the Golf to 'communicate' with road infrastructure and other cars around it. A comprehensive suite of standard active safety tech completes the tally.

The only other trim level for now is Style, which has 17in alloys, adaptive LED 'Plus' headlights, upgraded seats and upholstery, additional ambient lighting, decorative wood inserts and three-zone climate control. 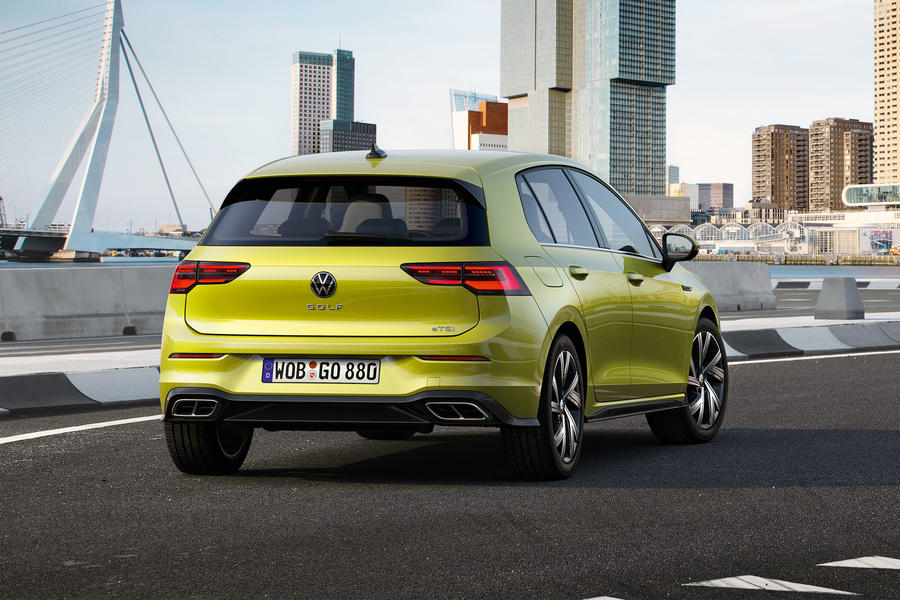 The latest version of the long-running family car – which was first launched in 1974, with more than 35 million sold since – goes on sale in five-door form only with new mild-hybrid engine options and a raft of new digital technology.

The new Golf was launched at VW’s Wolfsburg headquarters, with an initial reveal at this year’s Frankfurt motor show postponed so the firm could focus attention on its new Volkswagen ID 3 electric hatch. But while the ID 3 represents the next generation of Volkswagen, in the medium term it is likely to be dwarfed in sales by the new Golf. That’s why Klaus Bischoff, VW’s design boss, has referred to the new Golf as “an indicator of the present” that represents “what’s possible nowadays within the volume segment”.

The entry-level 1.0-litre three-cylinder TSI petrol will be offered with 89bhp and 109bhp, while a 1.5-litre four-cylinder TFSI will come in 129bhp and 148bhp guises, all driven through a manual gearbox. The sole diesel on sale in the UK will be a 113bhp 2.0-litre TDI, available with manual or automatic transmission.

The eTSI-badged mild-hybrid engines use a 48V belt starter/generator linked to a 48V battery and mounted directly to a seven-speed direct-shift gearbox (DSG). VW says that the eTSI units, offered with 109bhp, 129bhp and 148bhp outputs, reduce fuel consumption by around 10% by allowing for engine-off coasting, and increase acceleration due to electric boosting. 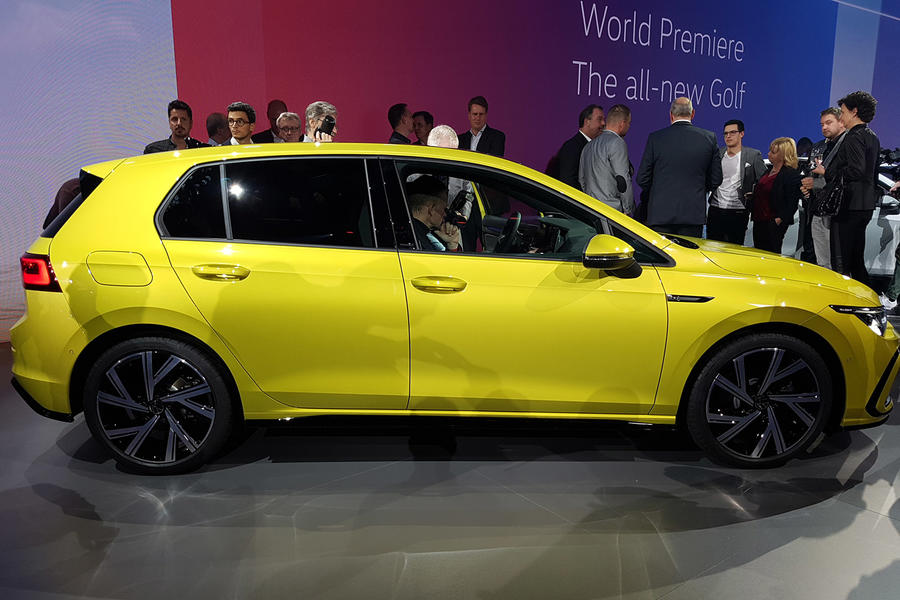 The most powerful Golf at launch will be the 241bhp GTE plug-in hybrid, which combines a 1.4-litre TSI petrol engine with an electric motor. Energy is stored in a 13kWh battery, providing 50% more capacity than the outgoing GTE.

VW will offer a less powerful 201bhp eHybrid PHEV model in some markets, although it won’t be available in the UK. Neither will a TGI natural gas-powered machine that will be sold in Europe. With the arrival of the ID 3, the Volkswagen e-Golf will no longer continue with the new generation.

The Mk8 Golf uses the latest version of the VW Group’s MQB platform, with dimensions largely unchanged from its predecessor: the car is 4284mm long, 1789mm wide and 1456mm high, with a wheelbase of 2636mm. It retains the MacPherson strut front and multi-link rear suspension, which work with VW’s adaptive damping control system and steering that has been reworked with a more direct ratio to inject extra feedback. 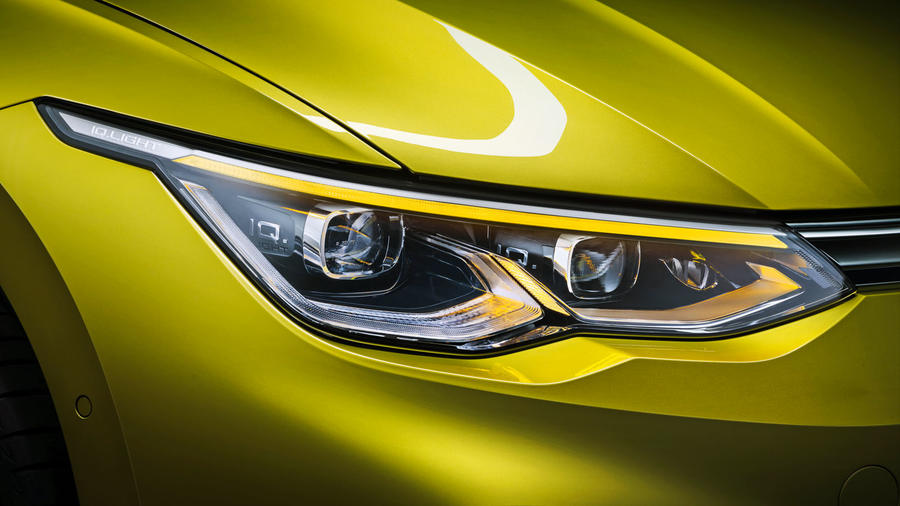 The latest Golf’s styling is distinctly familiar, with the front end revamped with new-look lights and, reflecting a similar feature on the ID 3, a new strip running from them to the VW roundel. The side profile has been tweaked with a focus on the more contoured C-pillar, intended to give it more presence at the rear, while the back gets a new raised rear bumper, and the Golf name written out beneath the VW logo.

While the exterior design is evolutionary, the new VW Golf’s interior has been comprehensively reworked, with a focus on digital instruments and controls. The dashboard is dominated by the infotainment touchscreen – 10in as standard in the UK – which is paired with a standard 10.25in digital cockpit display and an optional windscreen head-up display.

The climate and infotainment volume can now be adjusted by using a ‘slider’ located underneath the touchscreen, while a similarsystem is mounted into the roof console to operate the optional sunroof. The Golf also features the latest version of VW’s MIB3 infotainment system, which supports both touch and voice control, including the ability to use Amazon Alexa. It is permanently connected to the internet via an eSIM, enabling online music streaming, traffic information and shopping. 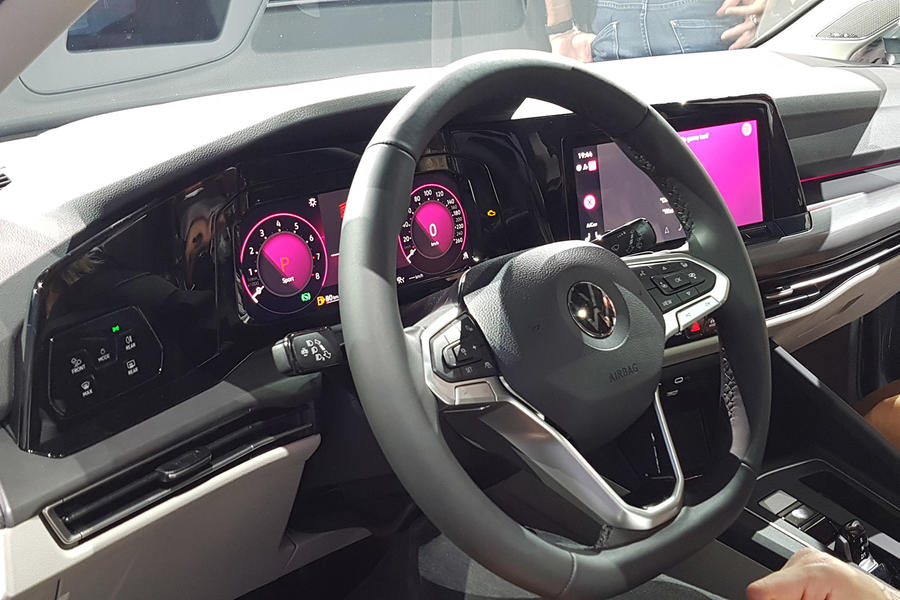 The positioning of the remaining physical controls have been reworked. Many have been bundled together and positioned higher and closer to the steering wheel and instruments on the dashboard. To make the interior feel cleaner and more spacious, the upper portion of the dashboard has been designed to appear as if it sits on a ‘table’, with an indented line underneath now housing the air vents to minimise their appearance. That line also features integrated ambient lighting elements, to make the car feel bigger.

VW has focused heavily on upgrading the technology on the new Golf, aiming to take its digital systems to a higher level than other cars in the class. It is offered with Travel Assist, which uses a combination of adaptive cruise control and lane assist to enable ‘assisted driving’ at speeds of up to 130mph.

The new Golf is also the first VW to feature Car2X technology, based on the harmonised European Union standard. Car2X uses information from cars and various bits of infrastructure fitted with sensors to produce data based on local traffic and conditions. 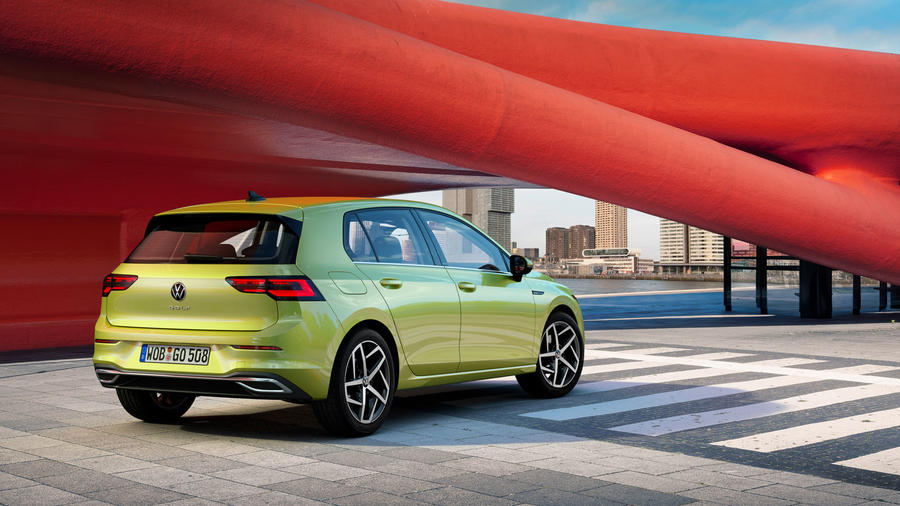 The Golf is offered with upgraded front assist, a system that can automatically brake for oncoming vehicles. There is also LED lighting as standard, with the option of VW’s top-spec IQ Light system. Sections of the matrix LED headlights can be dipped for oncoming traffic or to reduce glare from traffic signs, and adjust for corners and poor weather. Dynamic turn indicators feature too.

The new Golf’s eSIM also allows for over-the-air software updates to both the car and the infotainment system. UK buyers will receive a three-year subscription to VW’s We Connect Plus, which offers a range of services including media streaming, online route calculations, vehicle status, driving data, online map updates and, for the GTE, charging information. It will also allow owners to download add-ons from an ‘in-car shop’.

The firm has developed a mobile key system that will allow the Golf to be operated via smartphone. This won’t initially be offered in the UK but could be introduced at a later date. 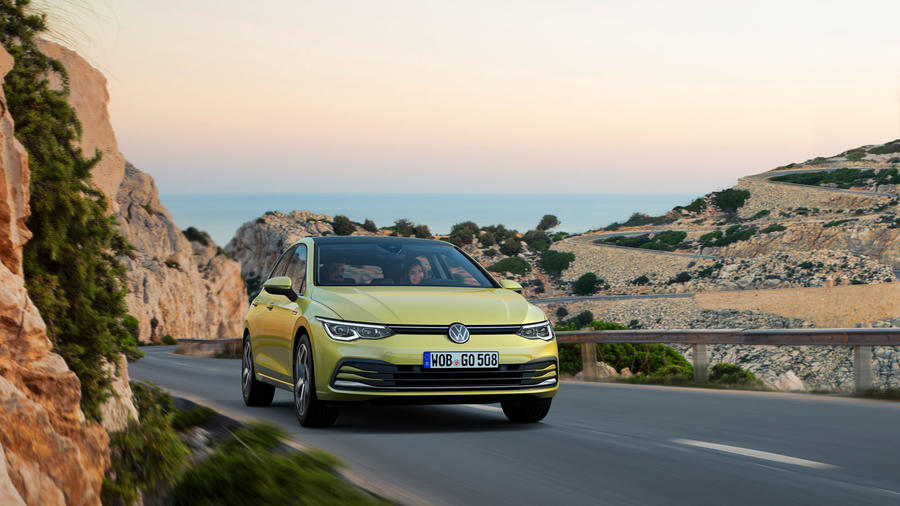 VW also claims the new Golf will be upgradeable, so features such as adaptive cruise control, light assist and the wi-fi hotspot can be enabled after purchase.

The GTI and GTD models are scheduled to follow later in the year, with the GTI using an upgraded version of the 241bhp 2.0-litre turbocharged engine from the previous model.

Car2X, which is fitted to the Volkswagen Golf for the first time, stands for car-to-everything. It’s a harmonised standard – in the European Union using wi-fi and 4G or 5G mobile data – to enable connected cars and infrastructure (such as traffic lights) to communicate with each other.

Doing so enables such devices to pool information that can be combined to create real-time live data showing traffic, traffic lights, breakdowns, weather or approaching emergency vehicles. For example, data showing multiple cars braking can be used to warn approaching drivers of slowing traffic ahead.

Such data systems have featured in some cars previously but, because Car2X is an EU standard, it means that data can be shared across any vehicle featuring the technology, rather than just those of a particular brand, greatly increasing the volume of information.

The EU standards also include strict rules concerning the data, so information is only sent anonymously and is not captured or stored by private companies.

Bizarre starting basic version, comes with Digital dash and Keyless, and I'm not sure what your average buyer would want other than this version and a 1.5 engine (preferrably the COD for £600 extra which pays for itself).

Oh yea, Keyless should always be an option as it's a pain in the butt and theft risk!

How do I sub. to this thread?

Is there a way to subscribe to these threads? Doesn't seem obvious.

Remember the allagro well but struggling to see frontal similarities! People say the same about all style changes then it just becomes the norm and accepted.