Prototypes of a RAV4 with a charging port have been seen for the first time, with 2020 debut likely
Open gallery
Close

Toyota has been seen testing what appears to be a plug-in hybrid variant of the Toyota RAV4 SUV on European roads.

At first glance, the prototype doesn't seem any different from the standard Honda CR-V rival. However, closer inspection reveals a disguised opening on the right-hand side of the car – the opposite side of where the fuel filler cap resides – a classic tell that a charging port is lurking underneath.

The test hack is also towing what looks like dynamometer equipment, another traditional sign of a new powertrain under development.

While Toyota is unable to officially comment, it's most likely that a PHEV RAV4 would continue to use the 2.5-litre Atkinson cycle four-cylinder petrol engine mated to a larger electric motor and lithium ion battery pack. 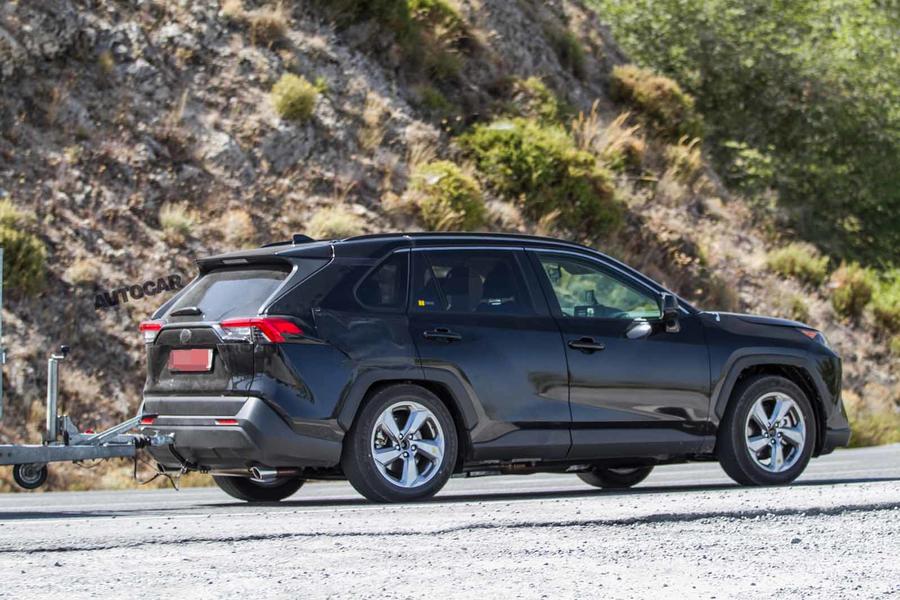 While the Japanese maker already has a PHEV in its arsenal in the form of the Prius Plug-in, that 1.8-litre unit is unlikely to provide sufficient power and torque levels to account for the substantial weight increase usually seen with a plug-in hybrid - for reference, the straight hybrid model already weighs around 1750kg.

The TNGA platform underpinning the SUV has been designed to offer a mix of powertrains. Expect an all-electric range target of about 30 miles, allowing a quotable low-CO2 figure to satisfy business users.

Toyota has long been an advocate of its so-called 'self-charging' parallel hybrid system – used in the Prius for two decades – claiming it's more convenient than having to plug in. However, all car makers will be forced to drive down their fleet average CO2 rating rapidly or face heavy fines as new EU emission laws come into force in 2020/21.

Electrification with a meaningful all-electric range is the most effective way of doing so. As such, expect a plug-in hybrid RAV4 to arrive on the scene in the middle of 2020, rivalling models such as the Mitsubishi Outlander PHEV and Vauxhall Grandland X PHEV.

Toyota to ramp up EV plans with six global models

An amazing vehicle created by

An amazing vehicle created by Japanese car technology. I listen from best paper service provider once about this vehicle and of course following a year I got it and as yet making the most of its 4 wheel drive. Fundamentally in the very start, Japan and European innovation work together on this undertaking and now creation unit is in Japan which is delivering around 90% of manufacturing.

Toyota use an atkinson cycle engine in their hybrids so they are already usually a little down on power for their capacity. Plus having a bigger but less stressed engine is better for longevity. And I wonder what the weight difference would be between say a 1.0l triple compared to a 2.5l 4 cyclinder given? I suspect Toyota have researched the optimum configuration based on current technology and costs and decided their system is right, for now.

If you're going down the route of a plug in hybrid with the inevitable penalty of a very heavy and expensive battery pack, why not make them work a little harder and downsize the combustion engine. Yes, I think BMW had the right idea with its discontinued i3 range extender.

For the Toyota, the combustion engine only needs to produce around 30 horsepower, which would allow all day 70mph cruising. Any additional power for accelerating could easily be supplied by today's high energy batteries. A relatively big 2.0 litre engine speculatively suggested above would easily yield 120 horsepower, allowing a completely unnecessary cruising speed of around 120 mph squandering any efficiency gains made possible with a hybrid. Plus it would make an already heavy vehicle even more weighty than it need be.