From £34,6696
Bigger-batteried Prius is frugal and works well as an urban EV, but it’s not the template we hope the PHEV of the future will be based upon
Open gallery
Close

The new Toyota Prius Plug-in, christened variously as the Prius PHV or the Prius Prime depending on where in the world you live, is a car sprung from a daydream had almost ten years ago, by a group of Toyota engineers looking to come up with the next giant leap in hybrid car technology.

“The idea that inspired us,” explains Chief Engineer Shoichi Kaneko, who worked on the original Prius Plug-in before leading his team to produce this replacement, “was to come up with an electric vehicle that charged itself.”

Two decades earlier, a similarly simple idea had become the driving force behind the original Prius hybrid: ‘the EV you could drive like a normal car’. Only a Japanese car maker, surely, could pioneer a powertrain so complex that it would take the rest of the car industry decades to catch up, and then use it to deliver on such a beautifully pure vision as that one.

Twenty years on from the introduction of the hybrid hatchback that changed the world, though, Toyota’s Prius sub-brand is under attack. It needs another reinvention: another light bulb moment. So is the Prius Plug-in that spark? Not quite, I fear. 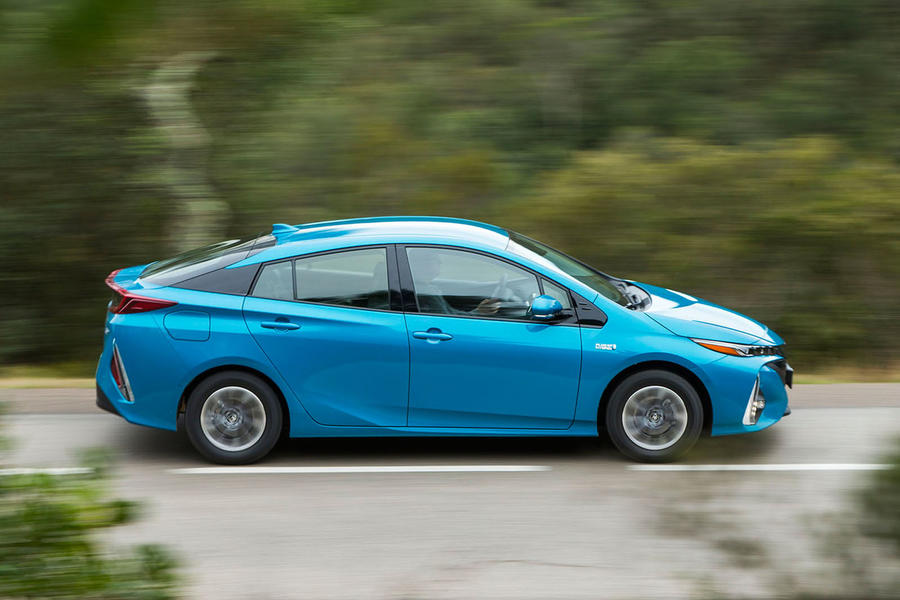 This is a clever car with some very neat features – chief among them an optional solar panel roof that can put enough power into its drive battery for a 90% charge in little more than a week. But it quite plainly isn’t the car to restore Toyota’s reputation as rightful owner and keeper of the petrol-electric playbook.

What the Prius Plug-in is, under the softened, massaged styling that moves it discretely away from the more visually arresting regular Toyota Prius and Toyota Mirai, is a fourth-generation Prius with a quite widely overhauled electric powertrain. An 8.8kWh lithium ion battery is accommodated under the boot floor in place of the standard Prius’ much smaller nickel-metal-hydride one, alongside a more sophisticated high-voltage electrical system to shuffle power in and out of it.

Toyota claims a big gain in real-world performance and driveability for the car by virtue of fitting its first ever ‘dual motor’ hybrid powertrain. In fact, the company has simply made the Prius’ existing motor hardware work harder. A new one-way gear between the car’s 1.8-litre Atkinson Cycle petrol engine and the smaller motor-generator of the Prius’ two-motor hybrid drive set-up allows both of the Prius Plug-in's electric motors to work together to drive the car when it’s running in ‘EV’ mode, upping electric-only power from 71 to a combined 102bhp. 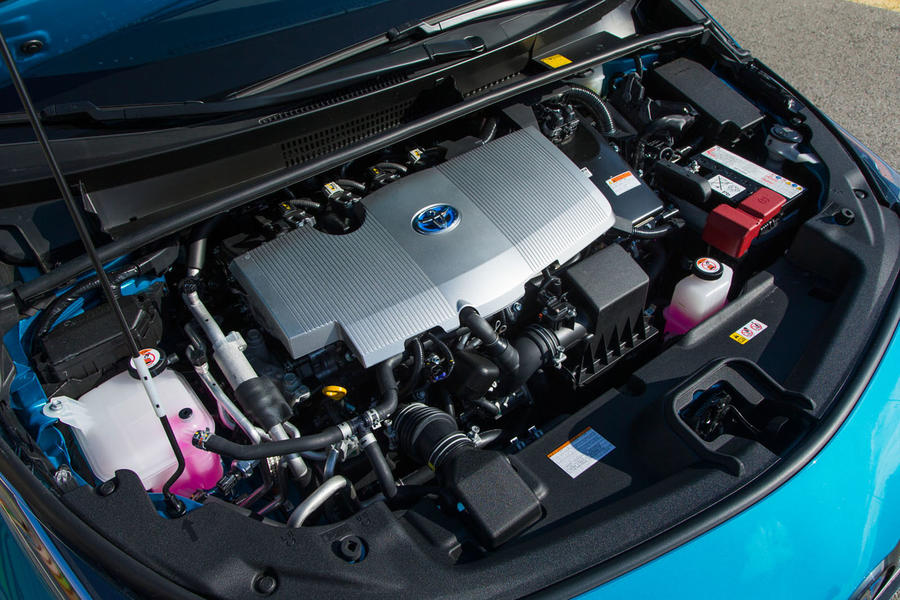 The increase in performance is also made possible by that new 352v lithium ion drive battery, which gives the Prius Plug-in a top speed of 84mph when running in electric-only mode as well as a claimed electric-only range of 39 miles. But what that new battery can’t do is create greater peak ‘system’ power and performance of the sort that you only get with the main electric drive motor and piston engine running in tandem. And so, in outright terms, the Prius Plug-in is actually no more powerful or faster-accelerating than a standard Prius, the price of which it exceeds by some 40%. You get 120bhp here and 0-62mph in 11.1sec, but for almost exactly the same price that BMW currently asks for a 330e with 249bhp, capable of 0-62mph in just 6.1sec. And both cars are rated in the same benefit-in-kind (BIK) tax band.

But let’s not overstate the importance of power and pace to the notoriously virtuous Prius buyer; to them, the Prius Plug-in may be more than exciting enough – and virtuous enough, no doubt, given it’s rated at just 22g/km of CO2 emissions and official combined fuel economy of a frankly absurd-sounding 283mpg. And, besides the modified hybrid drive system and the solar panel roof, this car has an innovative new gas-injection heat pump air conditioning system and a battery warming system, both of which boost its electric-only range and efficiency.

If plug-in hybrids are to have a future after the laughable way they’re emissions-tested by the EU is corrected, and after the Government-funded incentives to buy one finally dry up, it seems to me they need to become two cars in one. They need the refinement, response, ease-of-use and zero-emissions capability of an EV around town as well as the longer-legged authoritative pace, range and drivability of a combustion-engined car on longer journeys.

It may have been different up until now, but with credible 250-mile-range electric cars emerging onto the market at affordable prices, duality will become absolutely key to the appeal of a good PHEV. Right now, most of them are better at one side of the equation or the other – and the Prius Plug-in is the same way.

Its interior is almost identical to that of a regular Prius except for the two-seats-only second-row seating. Its boot is smaller than that of its sister car on account of its battery positioning. On both fronts, with the likes of the Volkswagen Passat GTE available at a similar price point, we’ve reason to expect better material quality and practicality. 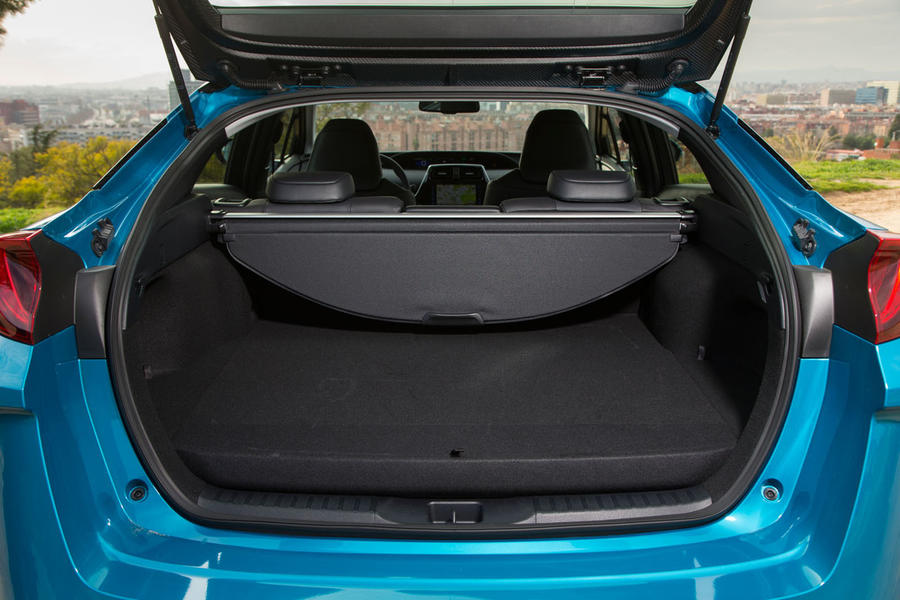 Away from its attention to the car’s hybrid powertrain, Toyota’s efforts have been spent on making the Prius Plug-in a more comfortable and refined car to drive than the regular hybrid. Noise and vibration insulation measures have been added under the bonnet, inside the front wings, under the interior carpeting and around the rear wheel arches, while the car’s suspension springs, dampers and anti-roll bars have been retuned for greater compliance.

The rewards are just about noticeable, though you still wouldn’t call the Prius Plug-in a refined car to drive in outright terms. It rides with more suppleness than the regular Prius, but its chassis still thumps and rumbles away a bit over poorer surfaces. And while the powertrain’s predictably quiet under electrical power, the petrol engine’s tendency to rev away noisily to its redline when you use anything more than about 50% of the accelerator travel remains a discouraging, nannyish bugbear.

Up to about 50mph, progress feels strong in electric-only mode. The Prius Plug-in has more than enough power and torque to keep its combustion engine quiet and responds to the pedal in the super-keen, linear proportion you want from an electrified car. The brake pedal's feel is the familiar muddled jumble of regenerative force and sudden apparent friction that makes slowing the car smoothly an exercise in guesswork. Yet you can still enjoy the Prius Plug-in’s hushed flit around urban roads – while it lasts. Toyota’s 39-mile electric range claim isn’t to be believed; repeated testing suggests that the car’s actual electric autonomy is more like 25 miles, which is good, but not exceptional among PHEV rivals. 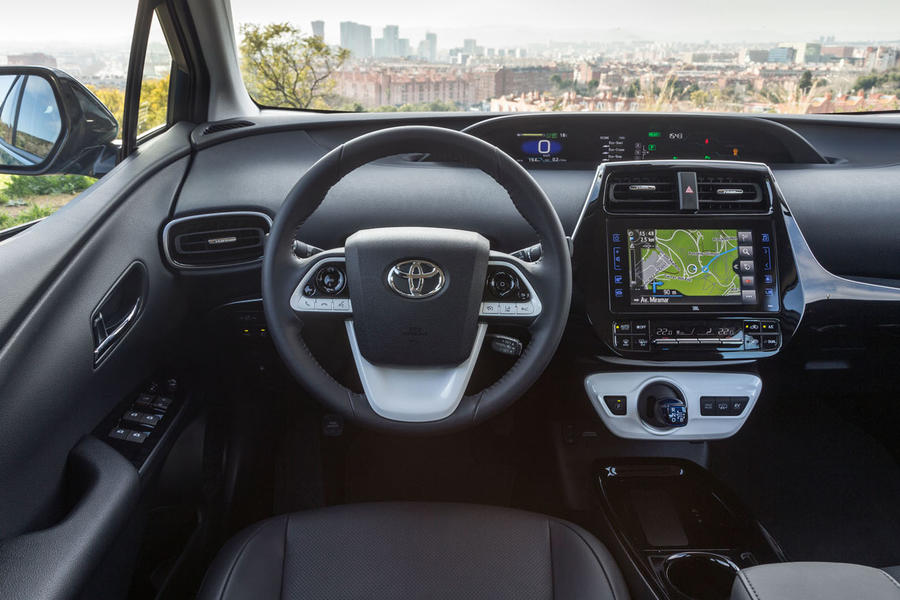 Once the Prius Plug-in's lithium ion drive battery is depleted and you’re beyond the bounds of the city, the car takes on a dynamic character indistinguishable from that of a regular Prius – albeit one with an extra 130kg to lug around. On A-roads and dual carriageways it’s slow and somewhat alienating under acceleration. Along twistier stretches it handles competently but with familiar remoteness. Its standard 15in wheels and 65-profile economy tyres running out of grip quite frequently - and quite suddenly - if you try to keep up a head of steam.

Drive more conservatively, as Prius converts undoubtedly will, and your reward is hybrid-mode fuel economy in the high-60mpgs: a far sight better than most PHEVs will return, but also only about 5mpg better than you’d get from the regular Toyota Prius.

The Prius Plug-in may be good enough to convince a minority of buyers that Toyota offers the best PHEV, but it’ll do little to endear the breed to a wider audience.

It has taken Toyota four model generations and twenty years to bring the regular Toyota Prius to a point where you might say it’s finally good enough, in most important ways, to seamlessly replace a conventional £24,000 hatchback for the average driver. But by adding £10,000 to that car’s price tag, beefing up its electrical reserves but doing little to the rest of the package, Toyota has promoted the Prius way beyond its abilities here, and stretched its credibility as a product much too thinly.

As far as the sweeping history of electrified motoring goes, I’m afraid this is a sideshow; a footnote; a car that fulfills its own limited brief, and will work well enough as a bridging platform for a few thousand very particular European customers every year who aren’t quite ready to take the plunge with a full EV. But compared to the hybrid state of the art – the latest-generation petrol-electric offerings from the European car-makers who’ve spent two decades trailing in Toyota’s wake but are now in a position to go toe-to-toe with it – it’s weedy and one-dimensional.

There should always be a place for daydreaming amongst the people who design and engineer our cars, but where Toyota’s hybrids are concerned – for the next few years, at least – a bit more benchmarking might serve the company better.

Only having four seats makes this about as useful as a Vauxhall Ampera. I mean why? Why would you even go near it?
Will86 9 February 2017

Stick with the standard Prius

I'm sure the European offerings appear more polished, but as a long term ownership proposition, I'd take the Toyota every time. That said, I think this PHEV version is too compromised (performance and boot space) and too expensive. The standard version is a much more complete car. I just hope that Toyota take the new chassis and hybrid drivetrain from the Prius, which have both been well received, and put them into a new Auris along with the interior from the CHR and then style the whole package with a little more care than Honda used with the Civic.
dougflump 9 February 2017

I've driven many a German bolide and some Beemers are very good at flattering a driver and doing that German thing with perceived integrity, however having driven a couple of Mk2 Prius's I've been seriously impressed,with the sheer competence of the thing
and I am still amazed that so many motoring journalists don't get it.
Peerless reliability, superb build quality, spacious, being an auto very easy to drive and really excellent MPG, what's not to like ! My brother a driver with 2 speeds( off and flat out) bought one after 3 money pit diesels and gets 45MPG with tiny servicing bills....
View all comments (12)