Tesla has begun deliveries of the long-anticipated Prospective Model 3 in the UK, with the first customers collecting their cars from the American firm's Heathrow dealership in West Drayton.

The electric saloon has been available to order in the UK since 1 May. Prices start from £38,050 for the entry-level Standard Range Plus, which has a WLTP-estimated range of 258 miles.

While official numbers aren't available, it's understood that around 50 customers collected their cars today (20 June), with the first deliveries of the zero-emissions model made to coincide with UK Clean Air Day. While initial deliveries are being made from Tesla Heathrow, customers will start to receive cars from other Tesla dealerships next week.

The Model 3 is being offered in right-hand drive in Standard Range Plus and dual-motor Long Range Performance forms. The latter starts from £48,590 and can reach 329 miles on a single charge. It's also available with an additional performance upgrade.

Tesla recently developed a new firmware update for European Model 3 Long Range models that will allow them to be charged at a rate of 200kW, making the Model 3 the fastest-charging car currently on sale in the UK.

With the firmware update, Long Range models can charge at up to 200kW at third-party charging stations. Tesla is also developing a fast-charging V3 Supercharger network for Europe, which will allow the cars to be charged at speeds of 250kW.

Both the Standard Range Plus and Long Range Model 3s come with aerodynamically optimised 18in alloy wheels as standard, with 20in alloys available as an option on the Performance Upgrade version. Prices include the UK government's £3500 plug-in car grant.

The Model 3 Performance, which has a 162mph top speed and can manage 0-62mph in 3.2sec, is priced from £56,900. It rides on 20in alloy wheels and includes a Premium interior package, which includes satellite-view navigation with live traffic, a premium 14-speaker audio system and in-car music and media streaming.

Tesla's 'full self-driving' autonomous functionality, which is due to roll out later this year, can be added for an additional £4900. The system can be installed post-purchase for £6800. 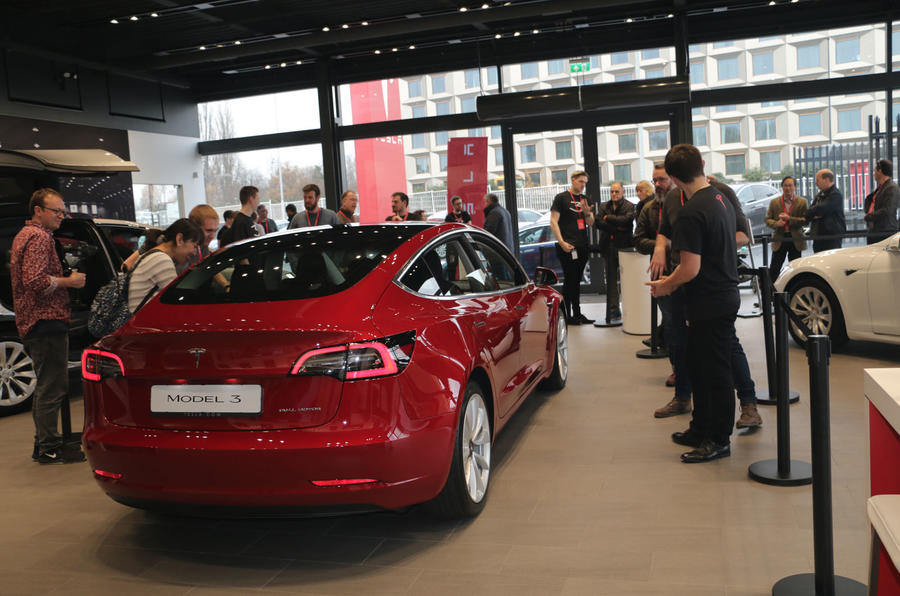 Model 3 owners won't get free access to the Supercharger high-speed charging system, with Tesla planning to charge for electricity as demand grows and it requires more investment to build up its charging network.

Tesla’s results from the third quarter of 2018 showed that it hit production targets for the Model 3, building 53,239 units. This followed a tumultuous second quarter in which a temporary ‘tent’ was constructed outside the firm’s Californian plant containing another production line so as to increase output.

Tesla Model 3 owners tell us why they're buying one

Tesla revealed its Semi lorry in November last year, and this is expected to go into production in 2019. Its next model, the Model Y small SUV, was revealed in March.

The highly anticipated Roadster, a sports car that is promised to hit 0-60mph in 1.9sec, is pegged to arrive in 2020.

Anyone know what the VED rate is for these zero emission cars?

Zero emission attracts £0 VED but given these cars are all over £40k list, does that mean VED is £320?

You Brits finally get to

You Brits finally get to taste what EV cars are really about (not these iPace, e-Tron nonsense). Longest range, fastest charging, best performance of all EV cars. It will outsell all other EVs in its class combined - as it is already doing in rest of Europe.