BACK TO ALL NEWS
Currently reading: Rolls-Royce faces new competition in China
UP NEXT
Bentley Batur: new Mulliner car to arrive on 21 August

Rolls-Royce could soon come under pressure at the top end of the luxury market from a little-known Chinese brand.

Domestic-focused car maker Hongqi, which in 2018 poached Rolls-Royce design chief Giles Taylor, is planning an attack on the pinnacle of luxury motoring that will eventually go global.

As part of the FAW Group, one of China’s biggest car manufacturers, Hongqi aims to achieve this by leveraging a rich cultural and historical heritage that includes building official government limousines such as the popular L5 (below).

Now settled into his role as global vice-president of design and chief creative officer in Munich, Taylor told Autocar of plans to build a flagship luxury car that would target affluent Chinese buyers who would traditionally aspire to own a Rolls-Royce. “We’re picking up young customers with extreme wealth – they want to buy Chinese,” said Taylor of the Hongqi brand, which was revived last year.

But, Taylor insists, rather than cloning Rolls-Royce, any Hongqi flagship designed under his stewardship will have its own distinct identity.

“We have to find a new Chinese, innovative and digital way of crafting new Hongqi vehicles that stand alone,” he said, so they cannot be “accused of being a copy of Rolls-Royce. We’re not going to do that.”

Taylor cited Chinese culture as the inspiration for a new brand identity, and confidently added that Hongqi “will become the number-one luxury brand in China”. 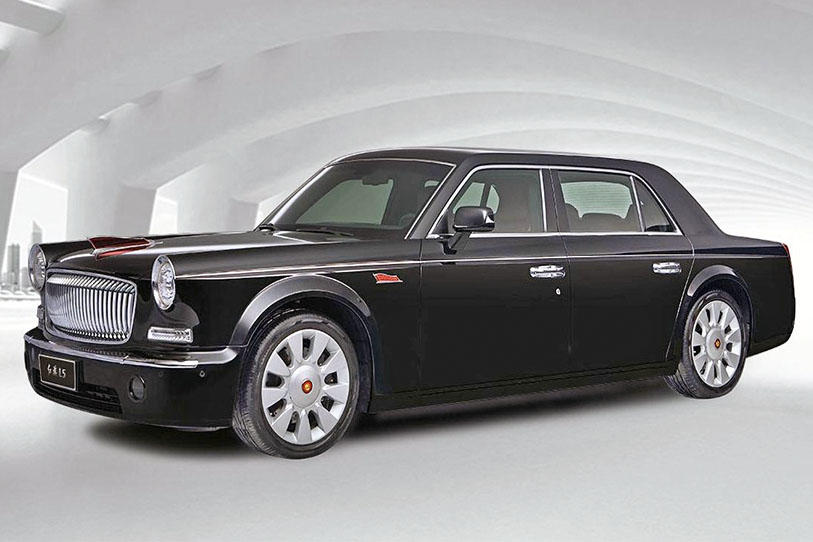 He added: “I think there’s a richness in the Chinese culture, whether it’s through ancient sculpture, fashion, calligraphy – there’s a rich mine to tap into to bring not just a Western answer, but a Chinese answer.”

While that design DNA is key, Taylor also sees innovation as a strength of Chinese brands and recognises an appetite for it.

“I see China as far more thirsty for innovation,” he said. “If you look at the customers… they expect innovations, but also design innovations.”

Taylor believes that, rather undercut Rolls-Royce on price, a new Hongqi limousine could challenge the British brand on content and innovation – and come with a suitably hefty price tag.

He said: “I come back to the artistic culture of China. We’ll use those crafted traditions in a way that will be beautiful and elegant and attract people in their own ways.”

Taylor acknowledges that competing in the luxury space will be a tall order in markets such as Europe and the Middle East where premium brands are long established.

“To bring the Chinese ‘Rolls-Royce’ out of China will always be a challenge because the 114-year brand legacy of Rolls-Royce has been cultivated and crafted and enhanced decade on decade,” said Taylor.

“We need to work out a way of carefully crafting its brand persona and platform outside of China, and that will take time.” Taylor nevertheless believes that the opportunity is enormous. He concluded: “With Hongqi, we’re starting somewhere fresher. But in many ways, sometimes the shackles of heritage are constraining. So there are positives and negatives in bringing a new luxury brand out of China.”

Rolls-Royce’s head of design, Jozef Kaban, has left the company after just six months in the role. Kaban, who replaced Giles Taylor in March, has departed to “pursue other interests”, although no further details have been disclosed. Kaban joined the BMW Group in 2017, originally focusing on the BMW brand under design chief Adrian van Hooydonk. The Slovakian had previously had a long career at the Volkswagen Group, where he is credited with designing the exterior of the Bugatti Veyron.

Imagine trying to get anything repaired on one. With such a low volume vehicle, it would be a nightmare outside of China.  I think in reality, we would have to see Chinese cars in general last longer than just a couple of years before falling apart to get a general consensous that what they build can be durable.

Own a Chinese car do you?

Sorry, looks nothing like the ADO16 - more like the A110 the luxury barge from Austin (but far far far superior in VdP livery)

I don’t see how this brand can go global...

Think back to the same

Think back to the same conversation made a few years ago re Tesla ...
Peter Cavellini 8 November 2019

This is way uglier than a Tesla....don't think your going to see World leaders ditching there home product for something that looks like it was made by a five year old with some playdoh...!

Talk about missing the point

Talk about missing the point completely...

Get back to your Chinese owned Merc and Chinese built Ipad.